If you're doing this before you cook chicken, you could make yourself sick.

Sure, beef might claim the slogan "it's what for dinner," but chicken is usually the easy meat of choice for at-home chefs across the country. In fact, every year Americans consume a whopping eight billion chickens. According to Vox, over the last few decades per capita chicken consumption has "skyrocketed," while beef consumption has significantly declined. Despite it being the more popular (and nutritious) option, whether you're roasting your bird or whipping up a coq au vin, chicken can come with more immediate health hazards than its cow counterpart. The Centers for Disease Control and Prevention (CDC) reports that you can get sick if you eat anything contaminated by raw chicken or its juices—and according to a new survey many people are doing something that can make their chances of food poisoning even worse. Read on to find out which major no-no to avoid when preparing chicken.

RELATED: Never Grill Your Meat or Chicken Like This, USDA Warns.

You may have seen your mother do it when making her famous fried chicken, but washing your poultry before you cook it is an outdated and quite dangerous practice. The CDC estimates that millions of Americans get sick from foodborne illnesses each year, resulting in roughly 128,000 hospitalizations and 3,000 deaths. Children, older adults, and those with compromised immune systems are especially at risk for the more serious outcomes, but food poisoning is no fun for anyone who gets it.

Raw chicken is often contaminated with Salmonella, Campylobacter, and other dangerous bacteria that get killed off when you heat it up. Campylobacter is the "most common bacterial cause of diarrheal illness in the United States," per the CDC, while Salmonella causes more foodborne illnesses than any other bacteria. The National Health Service (NHS) in England reports that recent studies have found over 50 percent of the chicken sold in the U.K. carries Campylobacter, and according to the U.S. Food and Drug Administration (FDA), one in every 25 packages of chicken at the grocery store in the U.S. are contaminated with Salmonella.

When you wash your bird it may seem like you're rinsing all these germs away, but it actually has the opposite effect. The water can end up spreading the bacteria to your hands, surfaces around the kitchen, and other food on your countertops. "Water droplets can travel more than 50cm in every direction," reports the NHS. "Only a few campylobacter cells are needed to cause food poisoning."

RELATED: Never Store Your Leftovers in This Part of the Fridge, Experts Warn.

This harmful bacteria can stay in your sink.

Not only can the water droplets containing bacteria splash around the kitchen, but whatever you washed off your chicken can remain in your sink—even after you clean it. A 2019 study from the U.S. Department of Agriculture (USDA) found that of the participants who washed their raw poultry, 60 percent had bacteria in their sink after rinsing the chicken (or turkey) off. "Even more concerning is that 14 percent still had bacteria in their sinks after they attempted to clean the sink," the study found.ae0fcc31ae342fd3a1346ebb1f342fcb

Despite this, many people still wash their raw chicken before cooking it. In a recent consumer survey conducted by the Food Safety Information Council and Australian Chicken Meat Federation, it was found that 49 percent of Australians commit this culinary sin.

Even with the high number of chicken washers the survey (which consisted of 1,219 people aged 18 and older) garnered, Cathy Moir, the council chair, was happy with this result. "We are pleased that rates of washing raw whole chicken has reduced from 60 percent to 49 percent since we last asked this question in 2011," she said. "Cooks who wash raw chicken pieces with skin on has also reduced from 52 percent to 43 percent and washing skinless pieces from 41 percent to 40 percent."

RELATED: For more health advice delivered straight to your inbox, sign up for our daily newsletter.

Take these other steps to prevent food poisoning.

Skipping the sink is not the only thing you can do to lower your food poisoning risk when chicken is on the menu. The prevention can start at the grocery store, where the CDC recommends putting your chicken in a disposable bag before you add it to your cart so the raw juices don't get on any other foods. It should remain in the bag in your fridge until you're ready to cook it.

It's a good idea to try to prepare the side dishes or salad you plan to serve with your meal before any poultry, and never let other food touch the same plate or prep area as the chicken. Always use a separate cutting board for chicken and wash it and any other utensils you used with hot, soapy water before you move onto your next item—and your hands, too! Sanitizing the area as a precautionary final step can ensure that all the bacteria is gone.

And invest in a meat thermometer. 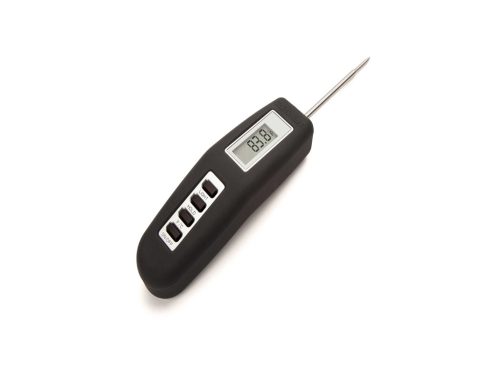 It's not just the raw juices that can get you sick: Simply eating an undercooked piece of chicken can give you a foodborne illness. But if you cook your bird until it reaches 165 degrees Fahrenheit in the center of the breast or the thickest part of the thigh, it will kill any bacteria lurking in there and is safe to dig in.

But how do you know when your chicken reaches the right temperature? This is where a meat thermometer comes in. They aren't cheap, but definitely a worthy investment to spare yourself the "cutting into the meat to see if the juice runs clear" guessing game. This little device will accurately tell you when your food is safe to eat, plus it will help you achieve a juicy, tender, and certainly not dry piece of meat every time.

RELATED: Never Wash These 4 Foods Before Cooking Them, CDC Warns.