Everything you never knew about the not-so-lost city of the Incas.

Nestled high atop a mountain in the Eastern Cordillera of southern Peru, Machu Picchu is a 15th-century architectural marvel. Most archaeologists believe the Inca citadel was constructed as an estate for the Inca emperor Pachacuti, who ruled from 1438 to 1472. But despite decades of archeological excavations (yep, Westerners only started exploring this site in 1911!), there are still countless mysteries surrounding these ancient Inca ruins. Whether a trip to this legendary site is on your bucket list, or you've just got a thing for stunning vistas, we guarantee these Machu Picchu facts will pique your interest.

The name Machu Picchu translates roughly to "old peak" or "old mountain" in the ancient Quechua language. ("Machu," meaning "old" and "picchu" meaning "peak.") In contrast, Huayna Picchu, the mountain in the background of everyone's Machu Picchu photos (that's it in the photo below), translates to "young mountain" or "new mountain." 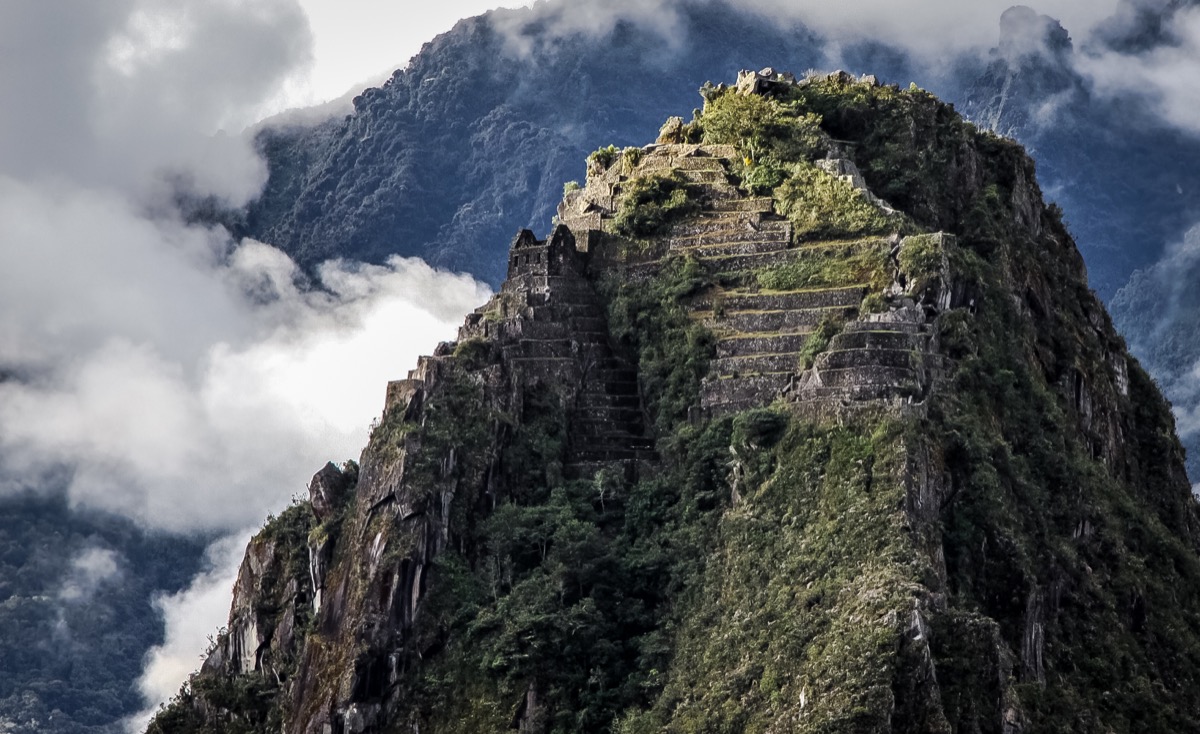 2. Speaking of Huayna Picchu—it's probably where you'll get the best view.

If you stand at the base of Machu Picchu and look up, you'll notice an even bigger mountain with yet another set of ruins. That's Huayna Picchu, the previously mentioned "young mountain"—and it's the best place to view Machu Picchu since it towers some 1,180 feet above it. Unfortunately, just 400 people are able to hike Huana Picchu a day. That's because its a treacherous climb that takes most hikers around two hours to complete. If this hair-raising climb is on your bucket list, plan to buy a ticket some three months in advance. You'll need to be 12 years or older, have an authorized guide, and you absolutely cannot be afraid of heights.

3. Machu Picchu and Huayna Picchu both sit at a lower elevation than the city of Cusco.

From that last fact, you might have thought these two peaks were some of the highest points in Peru. But it turns out, Machu Picchu is actually about 3,000 feet lower than Peru's capital city of Cusco. At 7,972 and 11,152 feet above sea level respectively, both Machu Picchu and Cusco each require a bit of high-altitude acclimation. That means if you don't take things slowly, you could be plagued by symptoms like shortness of breath, fatigue, and nausea. And that defintiely won't make for a good vacation story. 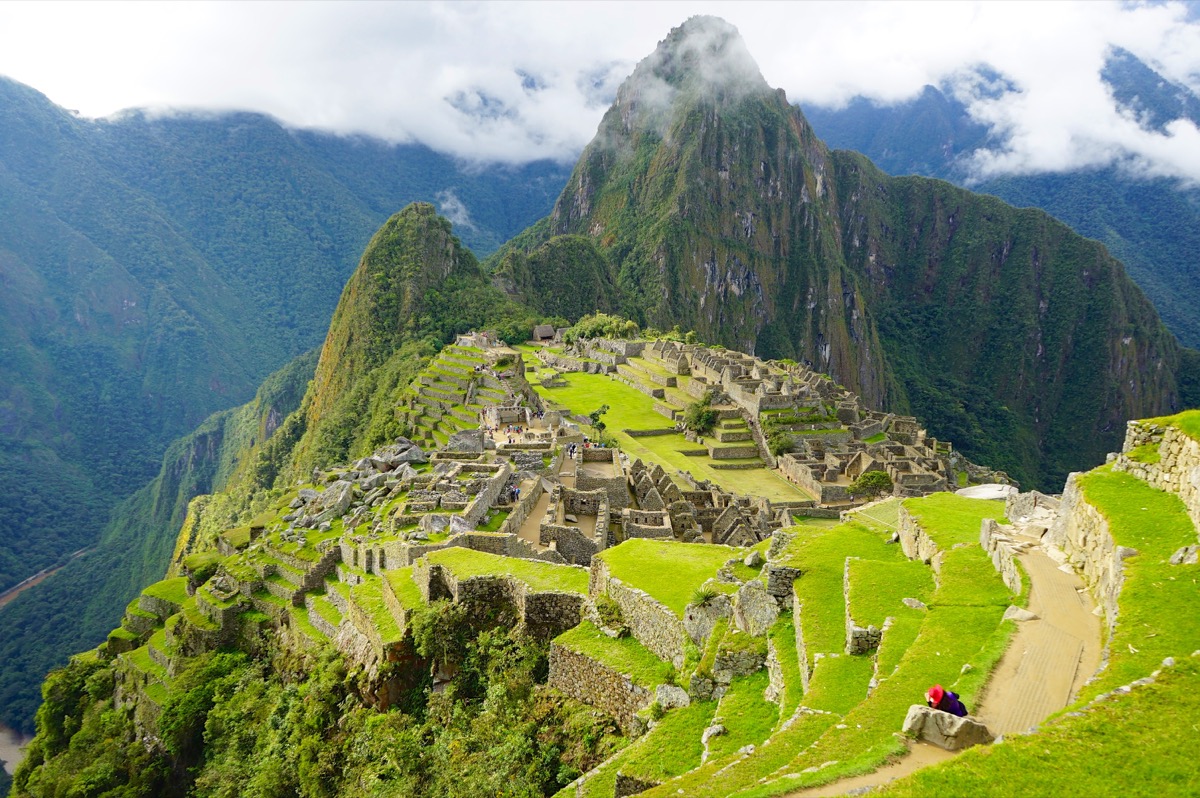 4. Historians still aren't sure exactly why Machu Picchu was built.

While most archeologists agree that Machu Picchu was erected as a royal estate for the Inca emperor Pachacuti, who ruled from 1438 to 1472, there's still room for speculation as to why he did it. One theory is that Machu Picchu was a scaled-down version of a mythic landscape from the Inca creation story, or that it was constructed to honor a sacred landscape (the site is built atop a mountain almost completely encircled by the Urubamba River, which the Inca called the Vilcamayo, or Sacred River.), writes National Geographic.ae0fcc31ae342fd3a1346ebb1f342fcb

Regardless, the site most certainly had both utilitarian and spiritual purposes as both a royal citadel and a sacred center. "For the Incas, the two ideas were integrated," wrote Johan Reinhard in his book Machu Picchu. "Anywhere the emperor lived was sacred, because he was sacred."

5. Machu Picchu isn't actually the "Lost City of the Incas."

Although Machu Picchu is one of the most iconic symbols of the Inca civilization, it's not actually their "Lost" or last city. That title is better suited to the city of Vilcabamba, a hidden capital city some 30 miles away, where the Incas found refuge after the Spanish conquistadors arrived in 1532. It eventually fell to the Spanish in 1572—but by that point, Machu Picchu had already been abandoned some two decades.

6. A piece of Machu Picchu was once destroyed during the filming of a beer ad.

In 2000, a beer advertisement for Cusqueña beer, a Peruvian brew, was being filmed at Machu Picchu when a crane collapsed and cracked the Intihuatana Stone, one of the most important shrines in the city. "The damage can probably be repaired but [the intihuatana] will never be quite the same again," archaeologist Luis Barreda Murillo told The Guardian. Naturally, the Peruvian government was not happy about the incident, and historians immediately called for a ban on commercial filming at the site. 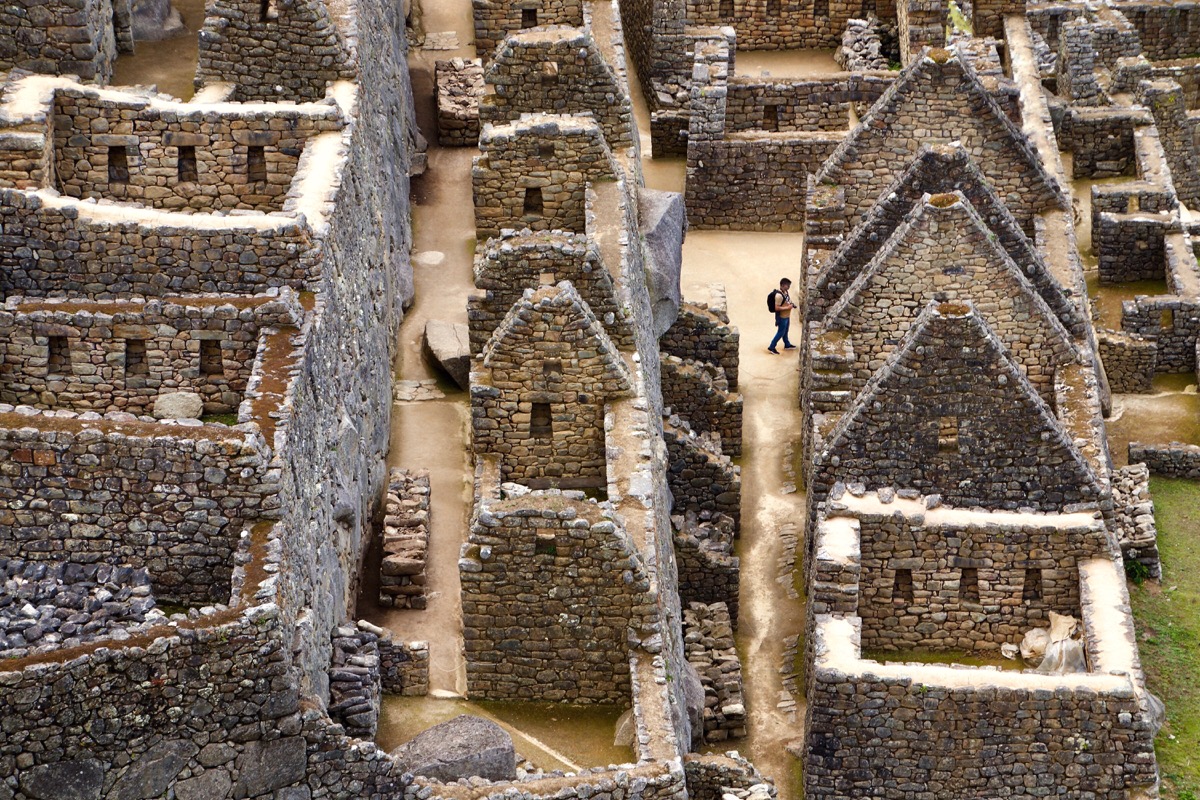 7. More than 60 percent of the construction on Machu Picchu was done underground.

While the site is known for its striking terraces and stonework, more than half of the work the Incas put into Machu Picchu was done behind the scenes. "The Inca engineers spent about 50 percent, maybe 60 percent of their overall effort underground—doing foundations, site preparation—to make sure that Machu Picchu would last forever," Ken Wright, a civil engineer who has been studying the site since the mid-1990s, told NOVA. It's no surprise it's stood the test of time.

Nearly 5,000 people visit Machu Picchu each day during the busy season between May and October, according to Frommer's. Combined with the slower, rainier months between October and April, that adds up to around one million visitors each year.

9. The site was built entirely by hand—and is totally earthquake proof.

How's that for craftsmanship? When Machu Picchu was built, there was (obviously) no machinery. That meant the Incas had to get all the stones in place by hand—and some of these boulders weigh more than 50 tons. But what's even more impressive is that the stones fit together so seamlessly they don't even require mortar.

Because of this construction, a technique called ashlar, Machu Picchu is entirely earthquake proof (and Peru sees about 200 small earthquakes each year). When an earthquake hits, the stones jiggle but don't fall out of place. If the Incas had used a more rigid mortaring technique, these walls probably wouldn't still be standing today. 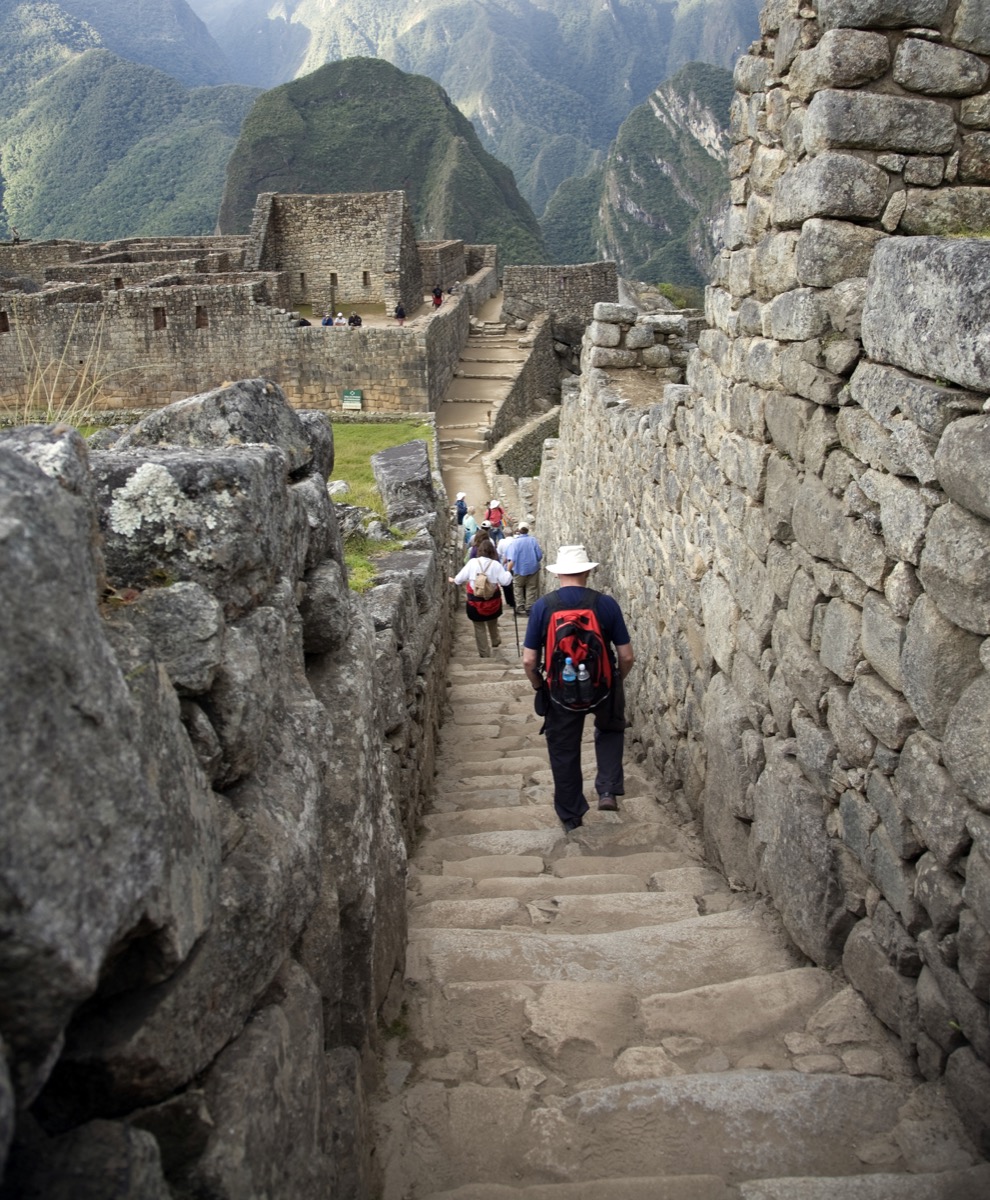 If you've ever been to Machu Picchu you know it's a trek to get anywhere, but you may not have realized just how many steps there really are. More than 100 separate stairways include some 3,000 steps. And stunningly, almost every single one of them was carved from one solid slab of stone.

The trail from Aguas Calientes, the town below Machu Picchu, is well marked and easy to follow. You'll spend about 30 minutes hiking before you reach the steps up the mountain. Expect about an hour of stair-climbing from there. After all, you've got about 1,280 feet to scale! We hope you've been working on your cardio.

11. It can detect the winter and summer solstices

There are a few ways in which Machu Picchu was engineered to interact with the sun and stars. One example is at the Temple of the Sun, where emperor Pachacuti is thought to have resided. Each year on the winter solstice, a beam of light streams through a window and forms a perfect rectangle atop a slab of granite. Another example is at Intimachay, a cave located just below the main ruins. Most days of the week, the cave is entirely dark. But at sunrise during the 10 days before and after the summer solstice, the sun illuminates the cave's rear wall. Recent studies found that these occurrences weren't accidents, either. The sites were indeed used as astronomical observatories.

12. Heavy flooding once forced officials to airlift visitors off of the ruins.

In January 2010, some 4,000 tourists and locals had to be rescued by helicopter after being trapped in the Machu Picchu area by flash floods, wrote the local news. Visitors were stranded for nearly a week while helicopters struggled to fly into the cloudy, mountainous area after mudslides cut off access to the rail line that typically takes visitors to the region. "We're just bored," one stranded tourist who was stuck at a nearby hostel told CNN. The tourist site was forced to close for almost three months after the flooding so workers could repair the damage inflicted on the train line and roads. 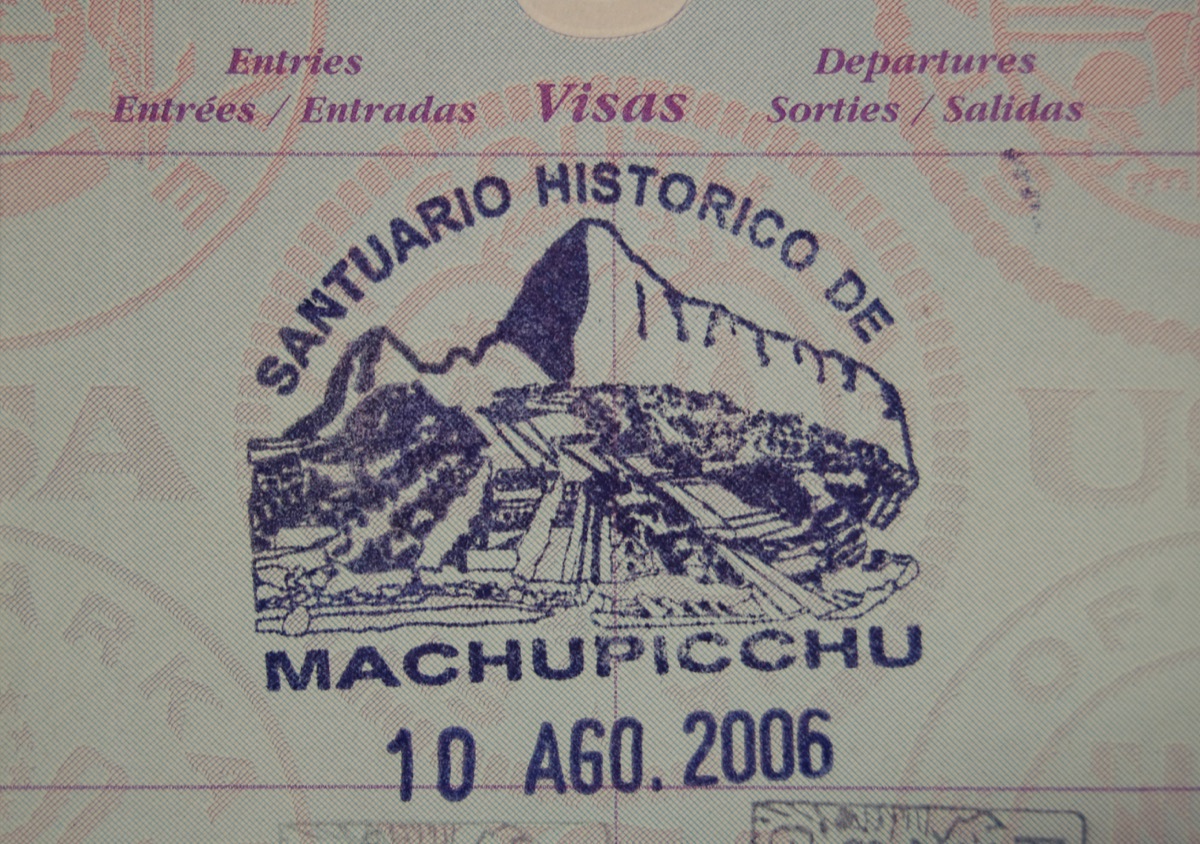 13. You can get your passport stamped at the entrance.

If you're not from Peru, you'll have to show your passport when you arrive at the ruins, despite the fact that you already showed it to enter the country itself. Guests also have to enter their passport number to purchase their Machu Picchu entry ticket, which is required in advance. The passport you show at the gate must match the one you bought your ticket with.

And while it's not required that you get an official Machu Picchu stamp on your passport, there is an opportunity to do so. From 8 a.m. to 5 p.m., a small desk is open just past the entrance where guests can get stamped. Even though it's not required, it's certainly a great way to commemorate this once in a lifetime adventure.

Despite the number of times you've likely seen friends on trips to Machu Picchu on your Instagram feed, Machu Picchu wasn't always the tourist destination it is today. In fact, it's only been open to the public since 1981. That was 70 years after American historian and explorer Hiram Bingham traveled to the region and was brought to the site by a villager in 1911. Bingham organized another expedition in 1912 to clear and excavate the site. It took another few decades for parts of Machu Picchu to be restored (and restoration continues today). Finally, Machu Picchu was declared a UNESCO World Heritage Site in 1983. Next up, you'll want to boost your sense of awe even more with these 30 Astonishing Facts Guaranteed to Give You a Child-Like Sense of Wonder.