Tiny bricks lay the foundation for some seriously colossal creations.

Since the first box of LEGOs was sold in 1949, children and adults alike have marveled at the ability of colorful, interlocking toy bricks to incite wonder and creativity in its purest form. Over the years, LEGO has been incredibly adept at allowing people from every walk of life to experience their favorite films, television shows, and greatest dreams by recreating and assembling them with their own two hands. The LEGO designers and masterminds of today are just carrying on this tradition of hands-on dreaming and storytelling—just on a much grander scale.

Herewith, you'll find the craziest structures ever built—life-sized fictional vehicles, multi-million-piece scaled recreations of entire cities (and countries!), and an entirely functioning house, just for starters. So read on, and rediscover that sense of childlike wonder. And for more of the world's craziest design plans, check out these 25 Totally Crazy Buildings That Almost Happened.

Top Gear engineering whiz James May built this life-sized and livable home in 2009, containing more than 3 million LEGO bricks. Though the home was eventually torn down later that same year, it was the first of its kind and actually contained a working shower, toilet, and sink.

2
The Lord of the Rings' Rivendell 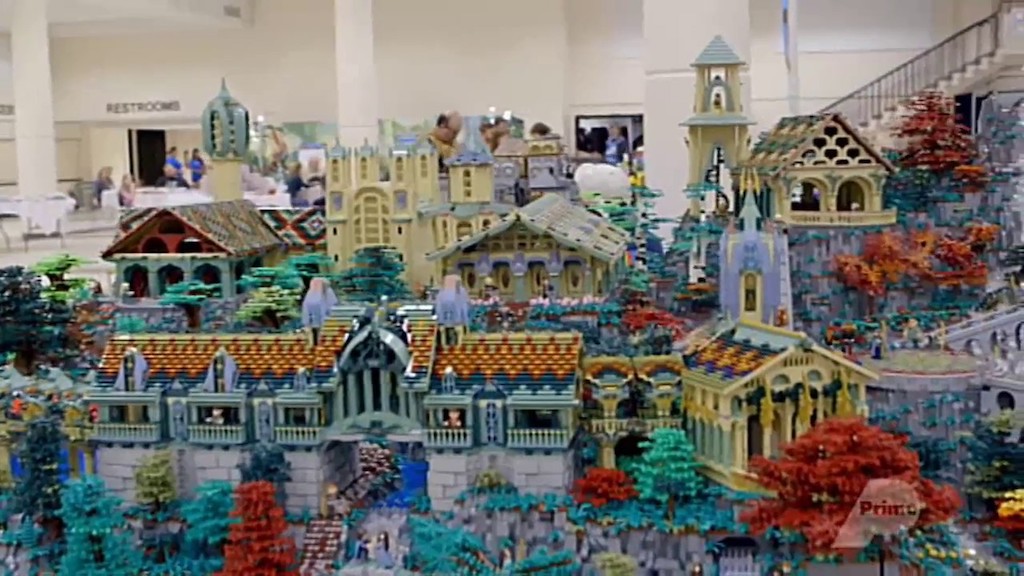 LEGO enthusiasts Alice Finch and David Frank recreated their favorite Elvin realm from the Lord of the Rings series, Rivendell, in 2013, using 200,000 bricks and featuring impressive details like plant life and tiny (and realistic) Elven figurines. And for more fantasy-inspired fun and games, check out the 8 Cutting-Edge Video Games That Will Make You Smarter. 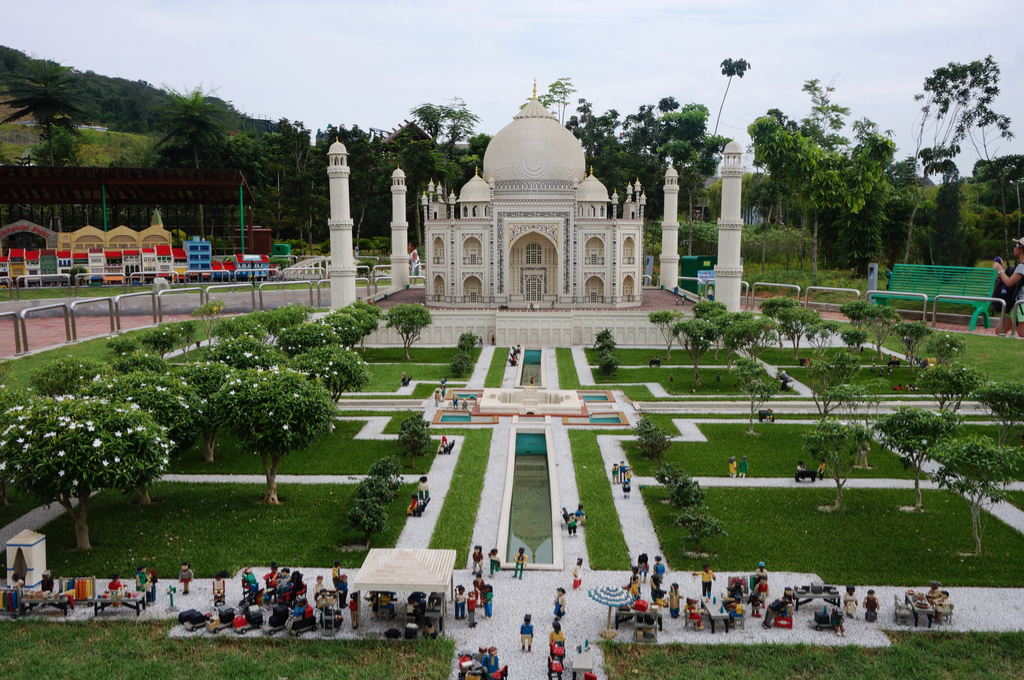 In 2016, LEGOLAND Dubai unveiled this replica of the famous Taj Mahal, made incredibly realistic from the attention to detail created by using 280,741 bricks.

Just recently created last year by LEGO design company Bright Bricks, this Batman Batarang is made to appear as though it has just crash-landed on Observation Point in London's South Bank. The installation consists of 35,000 LEGO pieces and is 133 times the size of the LEGO piece that it was based on. And for some real-life heroics, see The 30 Best-Selling Comic Book Series of All Time. 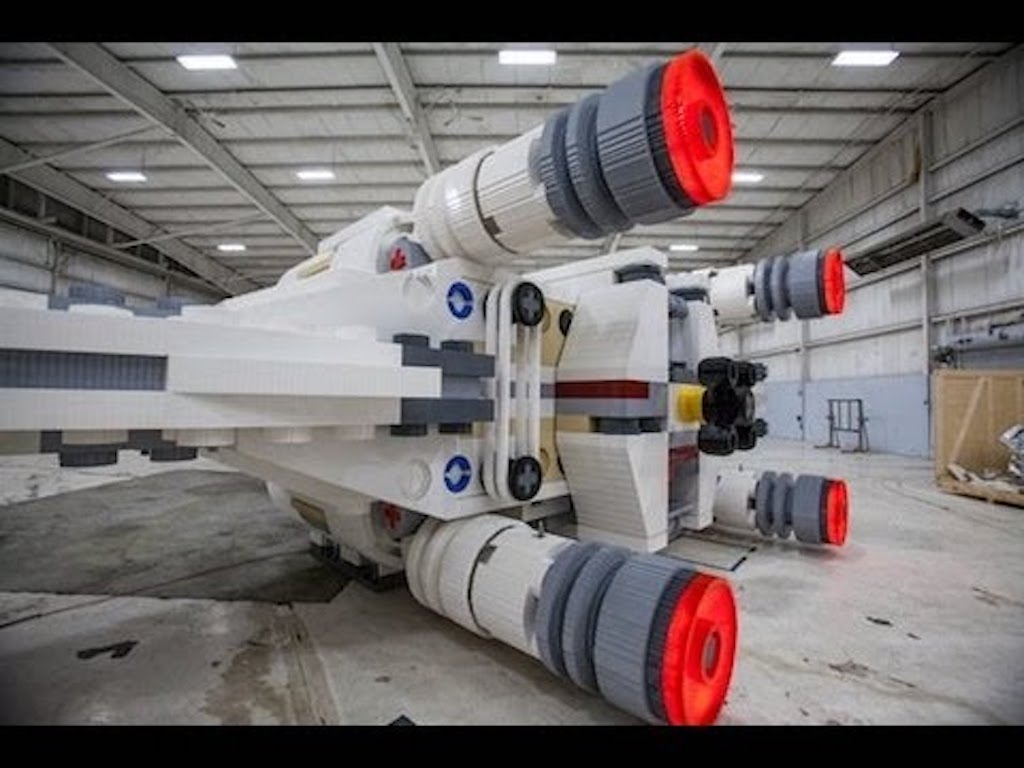 The LEGO company actually hires workers to build crazy contraptions like this life-sized X-Wing starfighter from the Star Wars films. In the end, this model contained 5 million LEGO bricks and weighed in at around 45,000 pounds—more than the maximum takeoff weight of some small aircraft. Additionally, since the team that assembled the Star Wars fighter knew that they were going to have to travel with it, they made sure that its structure could withstand stress and damage, just like the makers of the original model (minus the sci-fi tech). 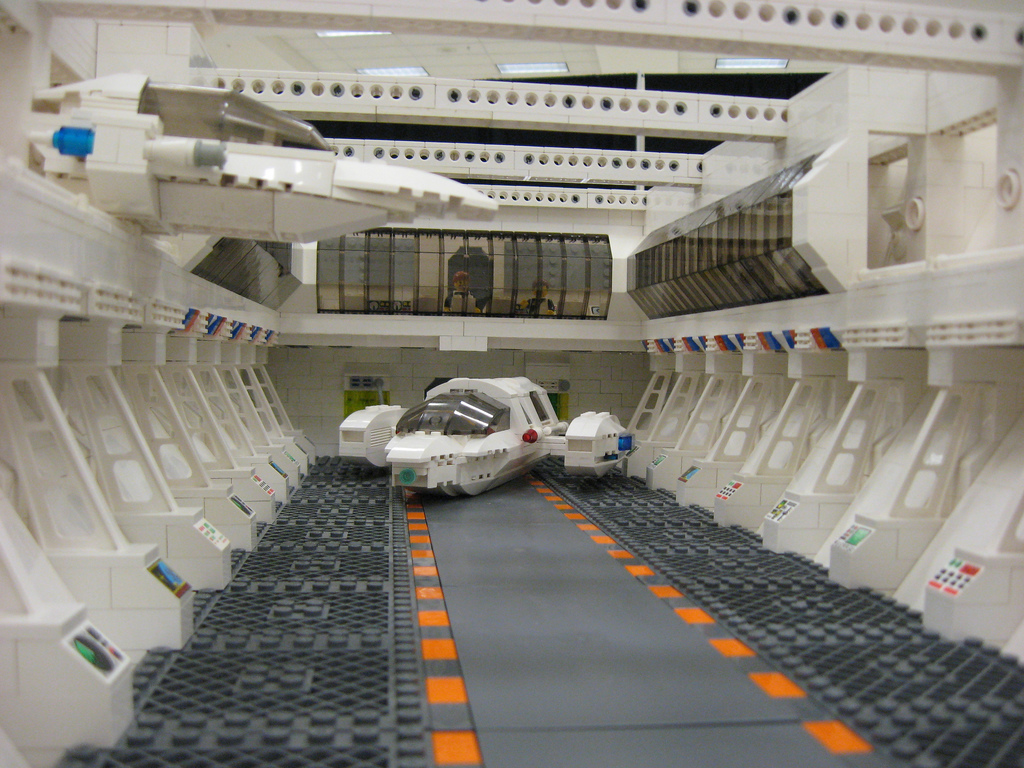 Yet another grand display of LEGO design, the Starship: OSS Pontbriand, created by Jeff Pelletier, showcases the LEGO master's attention to detail, and comes in at 6 feet long with four levels of fully furnished interiors. And for more amazing sci-fi, check out the 20 Long-Predicted Technologies That Are Never Going to Happen.

7
Tallest lego tower in the world

For years, cities all over the world have competed to design and construct the biggest LEGO tower—and for now, Tel Aviv, Israel, holds that title, with this 118-foot structure. The project was launched by the teachers of an 8-year-old student, Omer Sayag, who died of cancer in 2014 and attributed much of his happiness to building LEGO towers during his struggle with the disease. Together with the city of Tel Aviv, the teachers were able to gather enough LEGO bricks (more than half a million) to build this tribute to Sayag. And for some info about real-life skyscrapers, learn the 40 Crazy Facts about the World's Tallest Buildings. 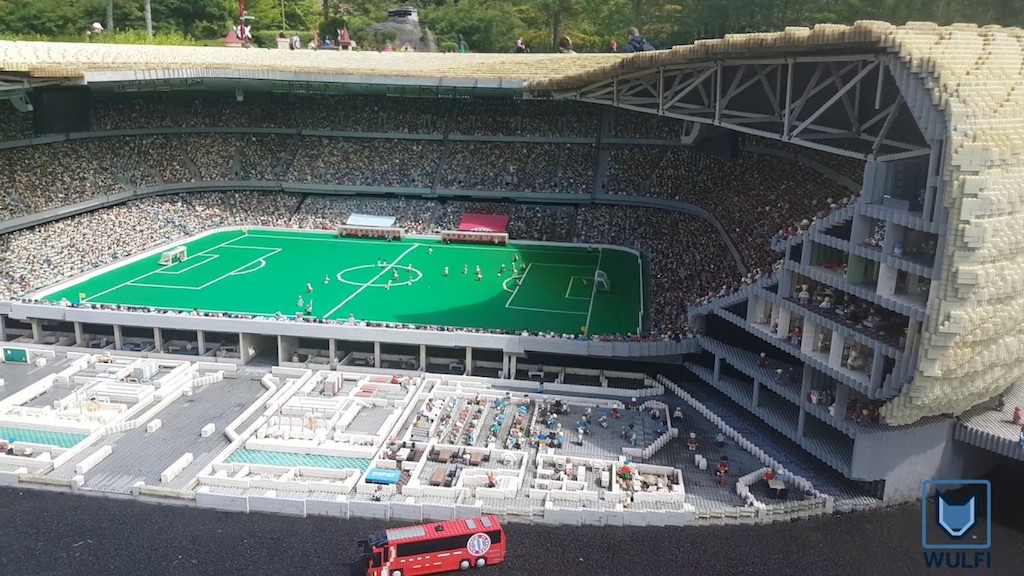 The LEGOLAND Deutschland Resort hosts this iconic LEGO replica of the Allianz Arena in Munich—complete with hundreds of fans and the complicated design structure of the outer dome. The structure, standing around a meter tall, houses more than 30,000 different LEGO spectators.

Undoubtedly one of the more impressive LEGO structures in the world, this detailed map of Europe, designed by Bruno Kurth and Tobias Reichling, not only features points of interest (made entirely of LEGO bricks as well), but also highlighted the area's topography in different colors. Overall, the map spans 12.5 feet and used around 53,500 LEGO elements. This giant giraffe, standing outside of Legoland Discovery Center Boston, was built with 22,000 of the company's Duplo bricks.

Created to imitate the 1953 lithograph print by Dutch artist M.C. Escher, creators Daniel Shiu and Andrew Lipson seamlessly carried out their LEGO design to resemble a world in which gravity does not exist. Shiu and Lipson not only spent hours crafting their LEGO mind-bender, but also struggled to find the correct angle to take photographs of their art, since the optical illusion is created by the angle of the camera and not of the actual artwork itself. 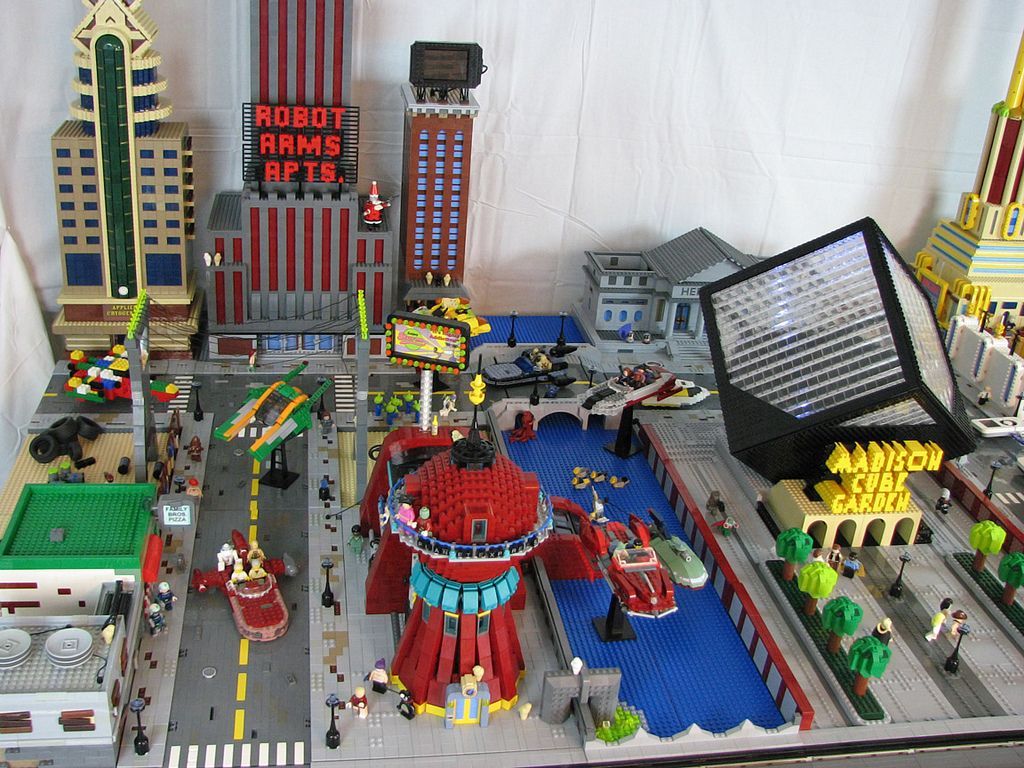 LEGO design master Matt De Lanoy is at it again with this impeccably-detailed version of New New York, a fictional town depicted in the television show Futurama. The structure presents new details from every corner of its five feet by seven feet layout—including Planet Express, its ship, the Robot Arms Apartments where Futurama characters Bender and Fry live, Momcorp HQ, the Head Museum, Elzar's fine cuisine, and so much more.

This carefully crafted Batcave was masterfully built over a 12-week period of time by Carlyle Livingston II and Wayne Hussey, containing over 20,000 individual parts, weighing over 100 pounds, and coming equipped with its own sophisticated light system. Holy legos, Batman! 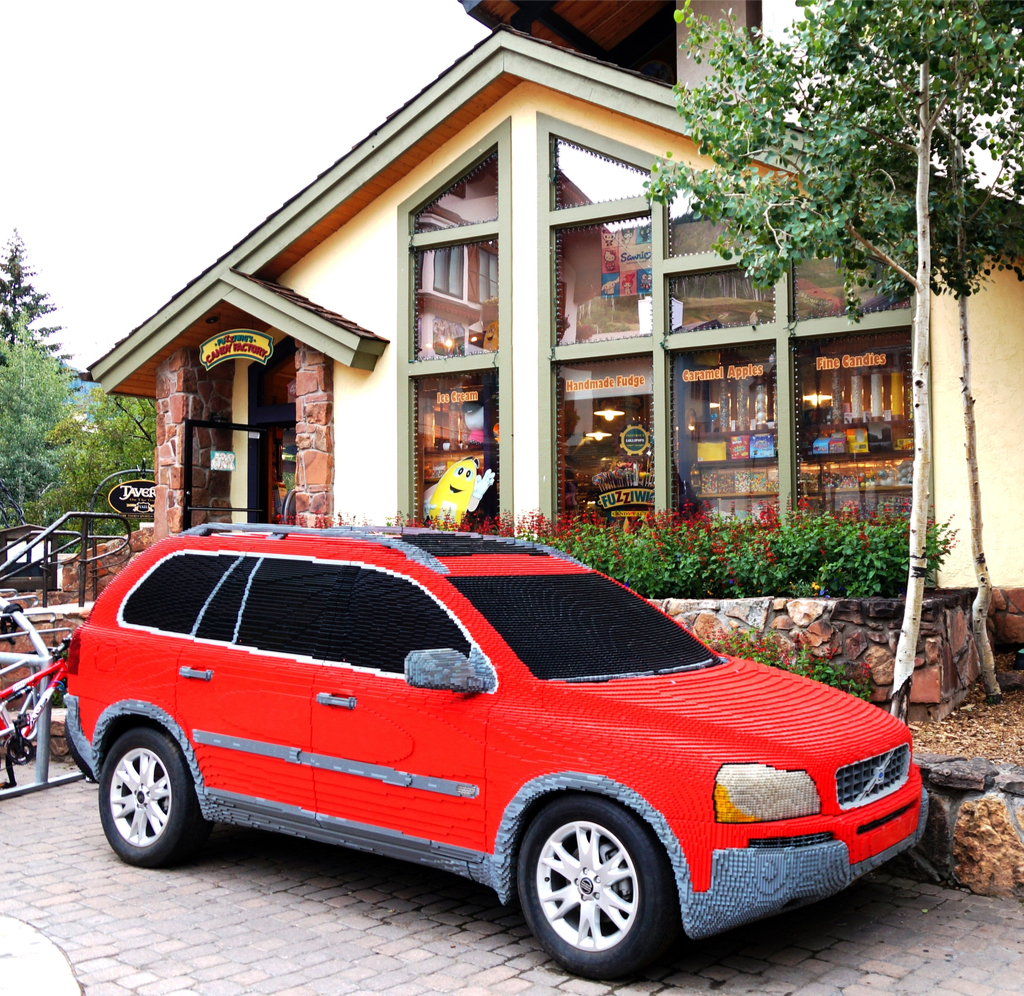 Though it's probably unsafe to drive, this full-size LEGO Volvo XC90, located outside of a LEGO retailer in Vail, Colorado, originally created by LEGO engineers at California's LEGOLAND, is comprised of approximately 200,000 bricks. While, no, you can't drive it down the road, it still makes for an amazing testament to the artistry of these LEGO engineers. 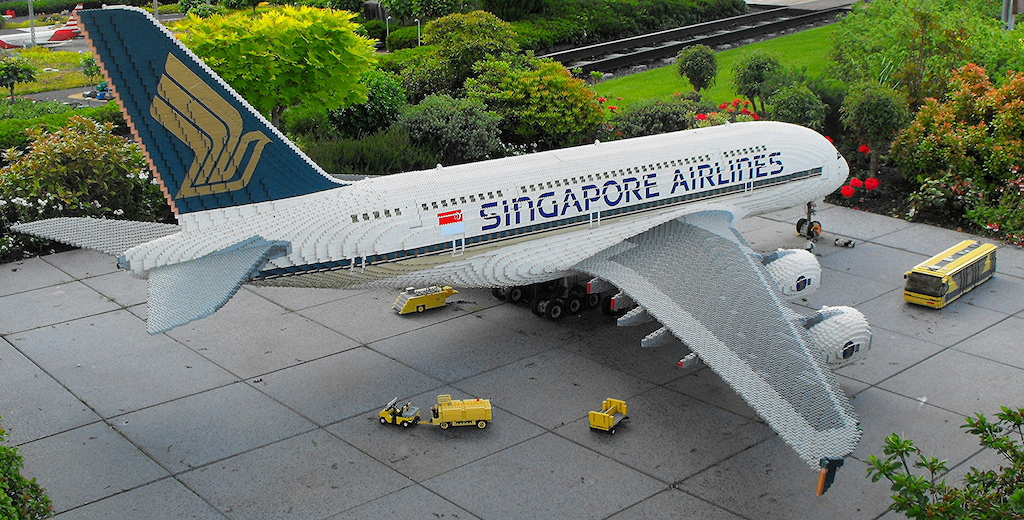 This A380 airplane model is the biggest to ever be built at the LEGOLAND Denmark, with a wingspan of 10 feet and containing approximately 75,000 LEGO blocks.

Amy Hughes constructed this seven-foot-tall church, called the Abston Church of Christ, cleverly capturing the other-worldly aura and architectural beauty in churches of such elegant stature. Featuring impeccable attention to detail, this sprawling creation was formed using hundreds of thousands of bricks and unique figurines. 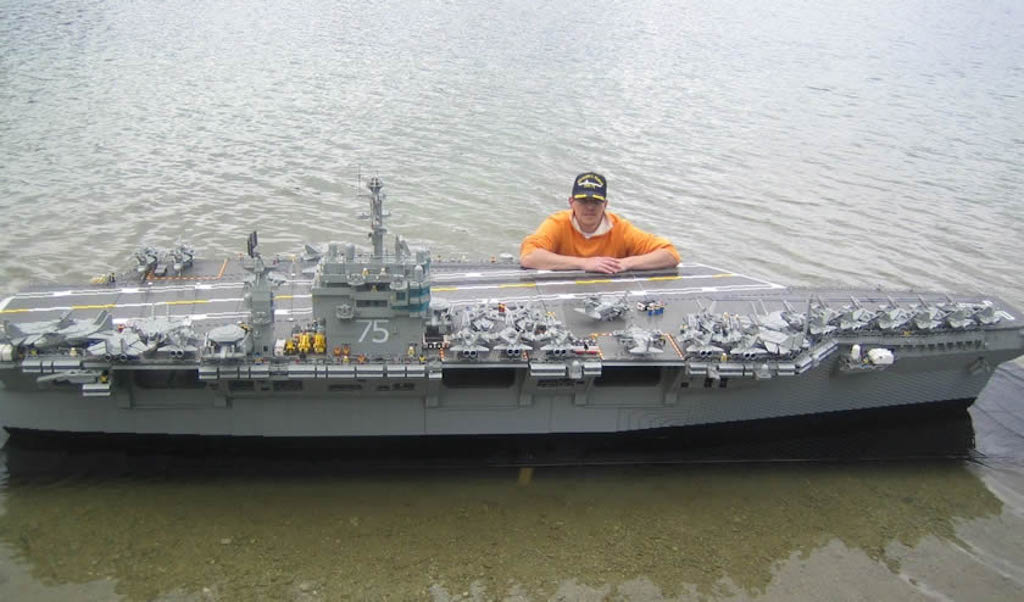 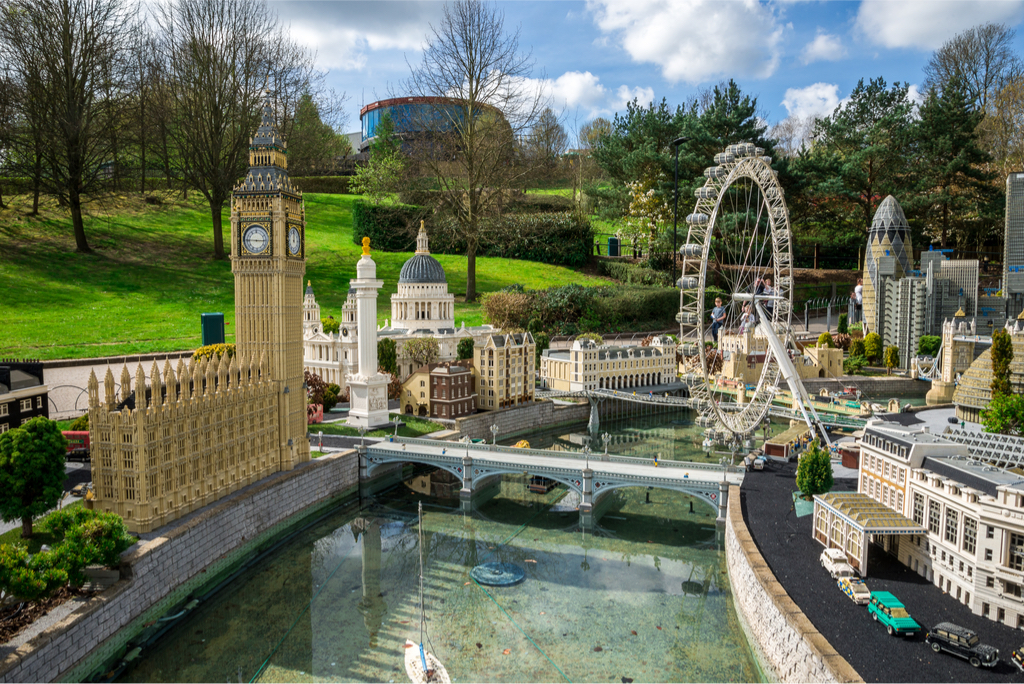 This amazing LEGO metropolis was constructed by engineers at LEGOLAND Windsor, successfully (and artfully) recreating some of London's most important landmarks, like the Palace of Westminster, Tower Bridge, and the iconic London Eye. Containing more than 13 million LEGO blocks, it's worth the trip to Windsor just to see the masterpiece in person (not to mention the fact that it's the site of recent history's most romantic wedding). 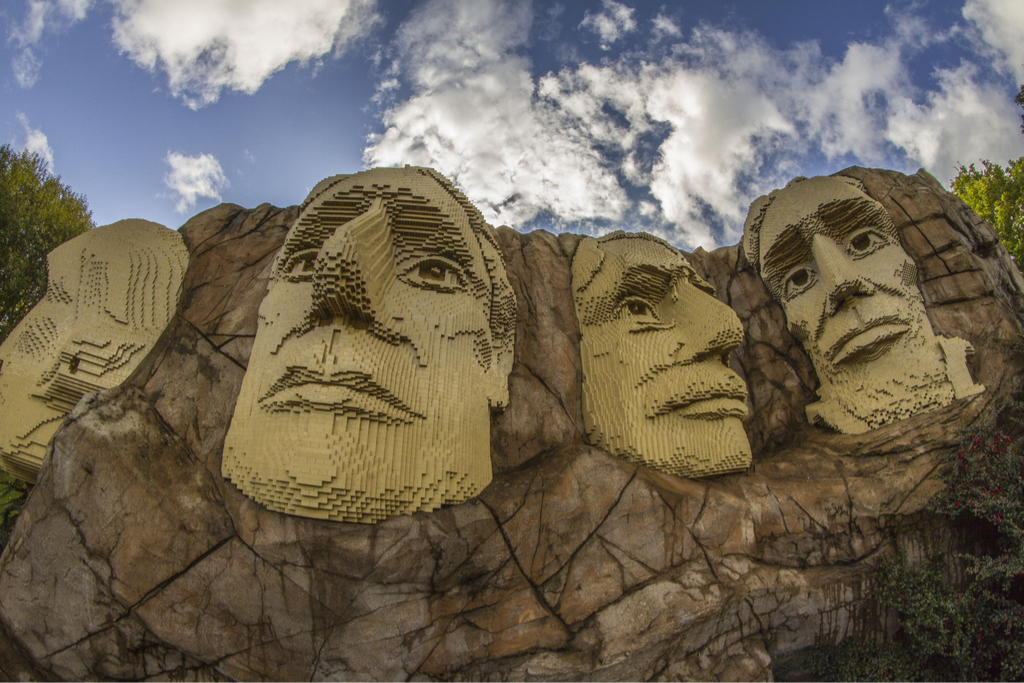 Though perhaps exceedingly bizarre, this recreation of Mount Rushmore, constructed by LEGO engineers and located in LEGOLAND Denmark, contains over one million LEGO bricks. 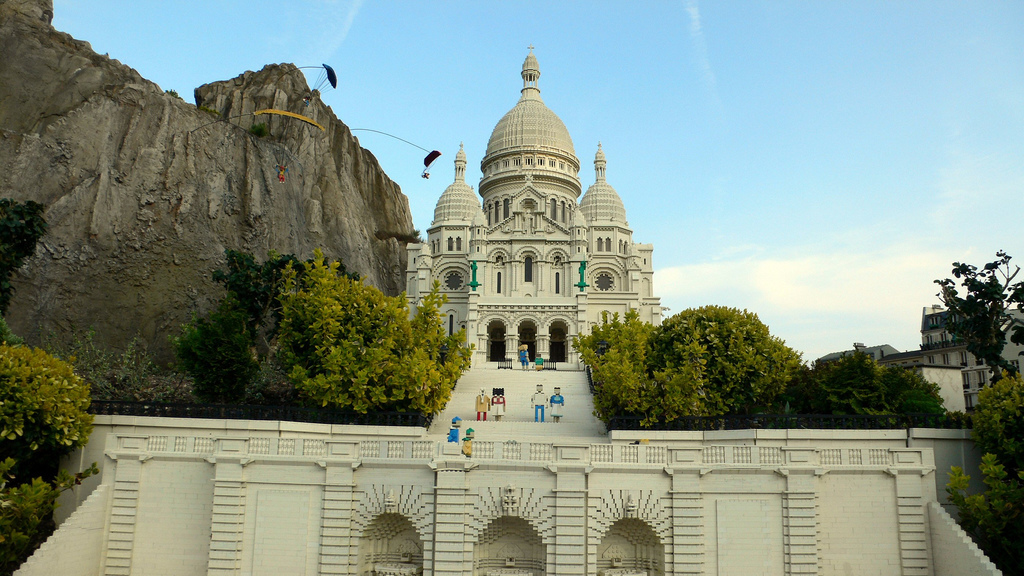 Located at LEGOLAND Windsor, this recreation of Paris's 18th arrondissement, otherwise known as Montmartre, was built by engineers at the park and features more than a million LEGO bricks, figurines, and miniature foliage and mountains. 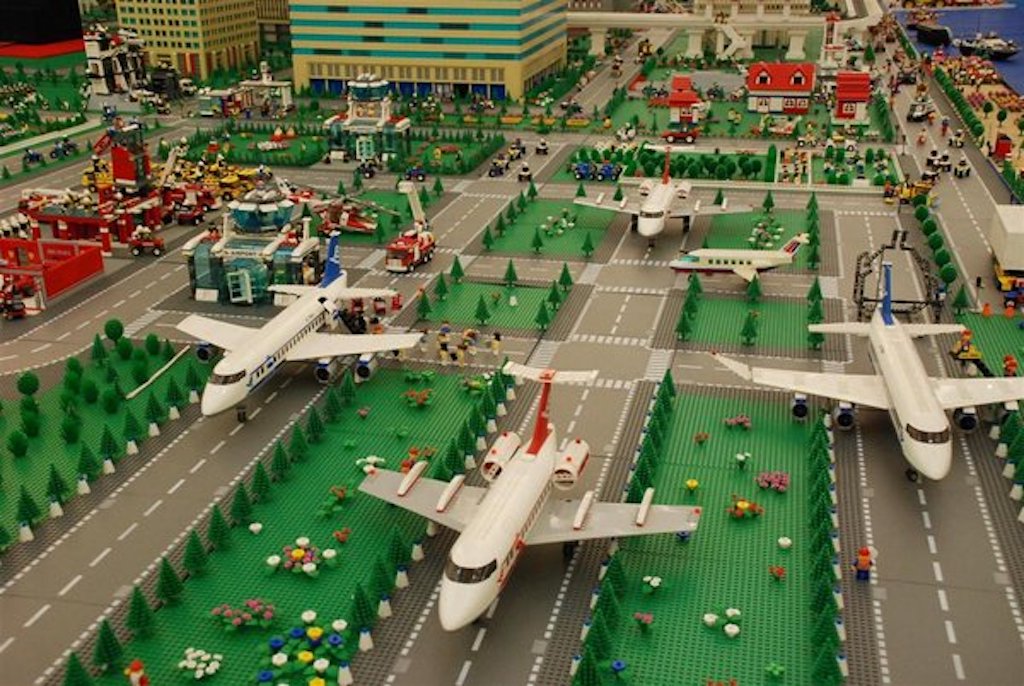 Featured as a part of LEGO City in Jakarta, Indonesia, this miniature airport included tarmacs, planes, personnel, and surrounding gardens.

Shortly after Barack Obama was inaugurated as the 44th president of the United States, LEGOLAND California decided to honor the occasion by recreating the entire 2008 presidential inauguration. Upon taking this spectacle in for the very first time, it might take one at least thirty minutes to find every major aspect of the day—down to Aretha Franklin's performance and guests in line for the portable toilets.

24
Afternoon of a Faun sculpture

Recreating a popular photo of 20th-century ballet, artist David Hughes spent countless hours and over 3,000 LEGO bricks to make this still life look entirely effortless—just like the dancer it's based on, Tanaquil Le Clercq. 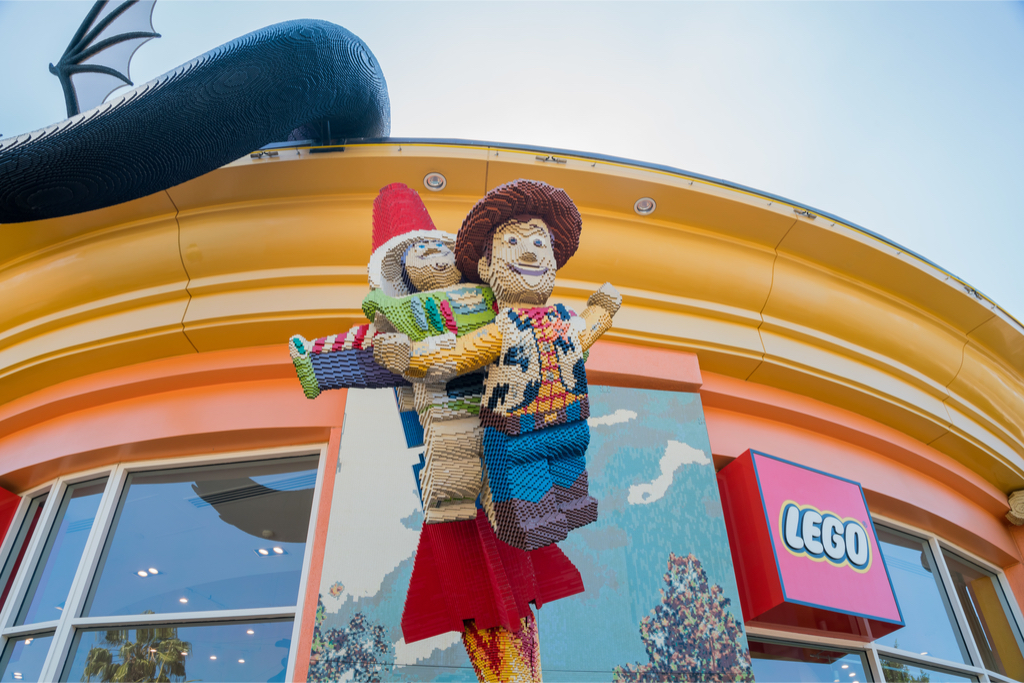 Located in the Downtown Disney Marketplace, this LEGO sculpture, created by LEGO engineers, features Buzz Lightyear and Woody from Toy Story shooting into the sky on a firecracker.

Back in 2010, when Blackberry phones were still used by much of the population, self-proclaimed LEGO master Nathan Sawaya created his own five-foot version of the 9360 model—built entirely out of LEGO blocks. Despite taking some artistic liberties (his version of the Blackberry features a working flat screen TV), it still effortlessly recreates one of the most popular electronic devices of our lifetime. 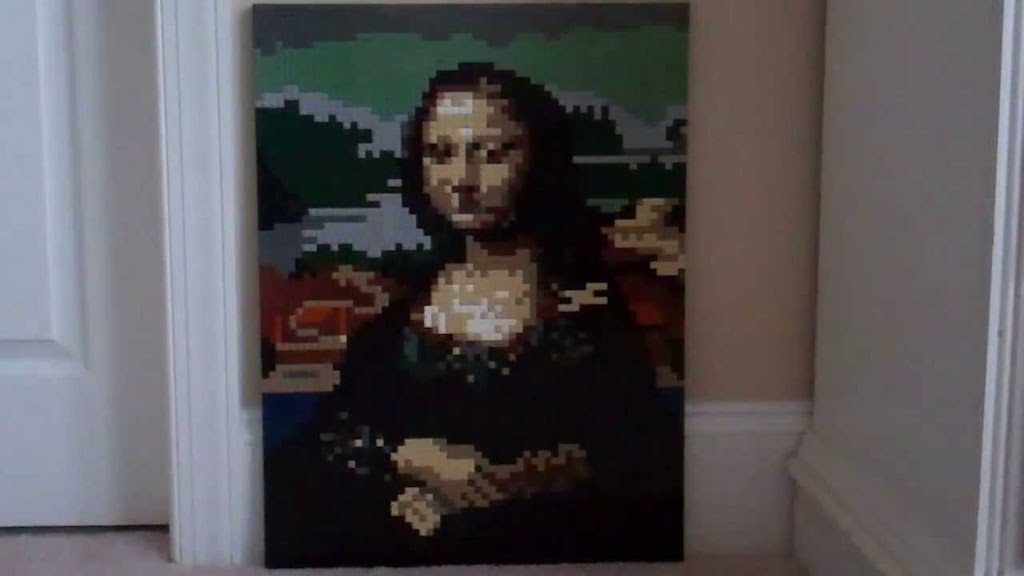 While looking to debunk the myth set out in a popular viral video, depicting a giant ball of LEGOS remaining intact despite several collisions, the Mythbusters team recreated the ball using one million LEGOS and quickly proved that the bricks couldn't withstand the trip from the starting point to the finish line.

29
Biggest Titanic model in the world 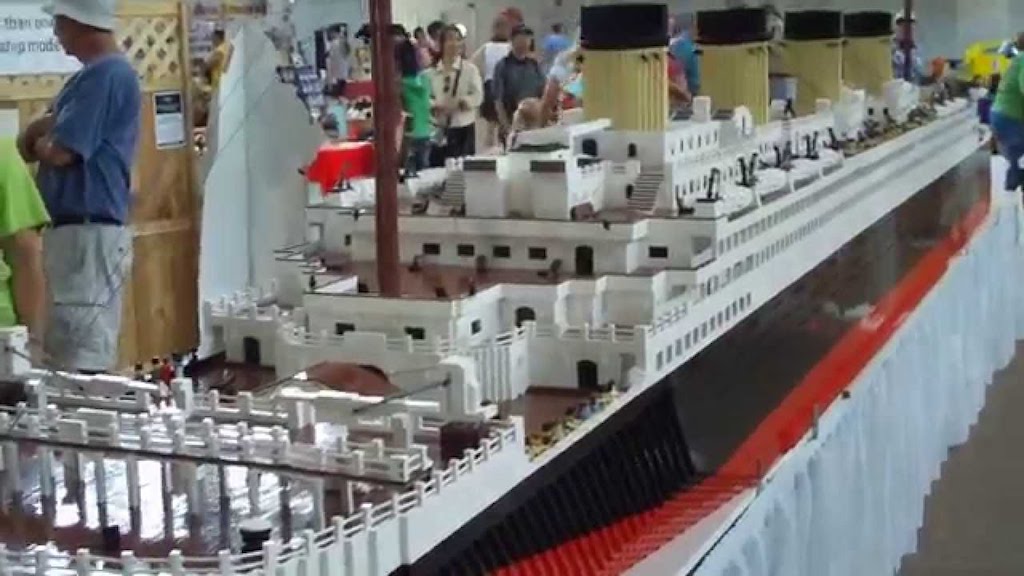 Brynjar Karl Bigisson, a 15-year-old boy with autism from Iceland, created the world's largest LEGO Titanic replica, coming in at 26 feet long and five feet tall. When the boy was just ten, he began working on the replica, which ended up taking him than 11 months to complete, eventually using approximately 56,000 bricks.

Beating out the competition by almost half a million bricks, this Land Rover advertisement required a whopping total of 5,805,846 bricks to build, making it the largest structure built by LEGOS in the entire world. The millions of bricks make up the 42-foot-tall replica of London's Tower Bridge and surrounding artistic scenery that make this advertisement so unforgettable.

Located in the LEGOLAND Florida Resort, this recreation of the Kennedy Space Center features the U.S. space shuttle, launch pad, Rocket Garden, and Vehicle Assembly Building, requiring the use of 50,000 bricks and 1,506 square feet of space.

Sitting just outside the Lego World Place in Florida, this giant t-rex towers above the crowd, made up of approximately 80,000 bricks.

Created by artist Sean Kenney, this life-size polar bear sculpture, currently on display at the Philadelphia Zoo, is comprised of over 95,000 bricks and took around 1,100 to construct.

At one point the tallest LEGO structure in the world, this sculpture depicting an Egyptian Pharaoh stands at 16 feet tall and weighs more than a ton. Visitors can revel in the sculpture's size and attention to detail at LEGOLAND Windsor. 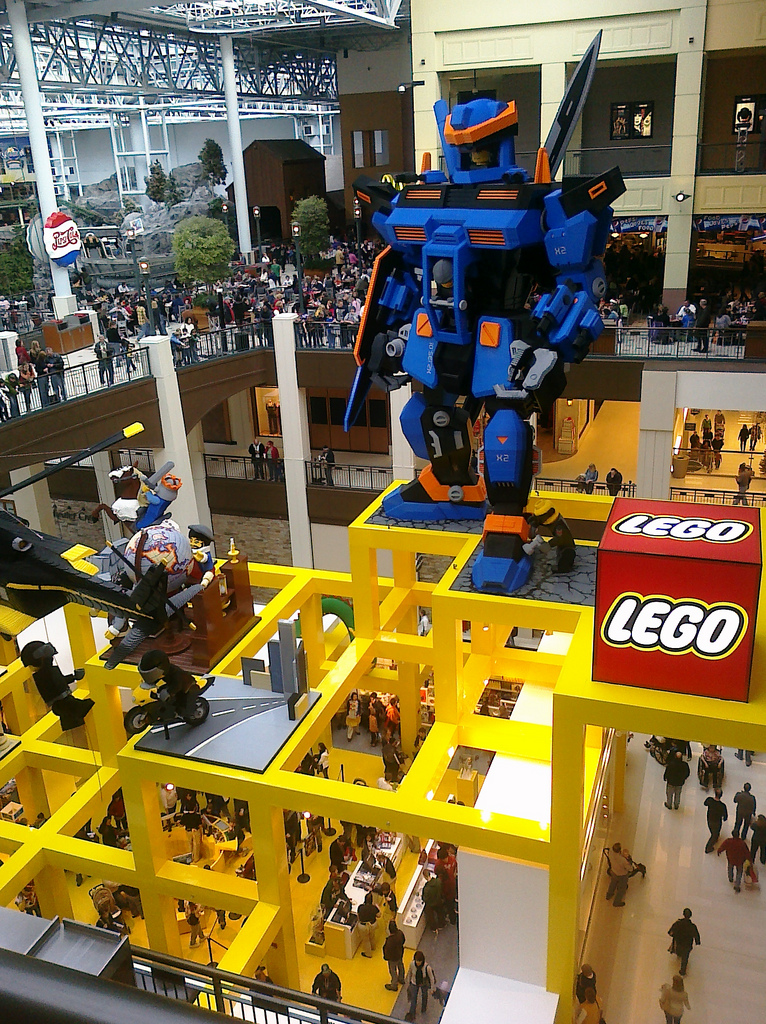 Sitting atop the LEGO store in the Mall of America, in Bloomington, Minnesota, stands Herobot 9000, a 34-foot-tall robot comprised of more than two million LEGOS bricks. 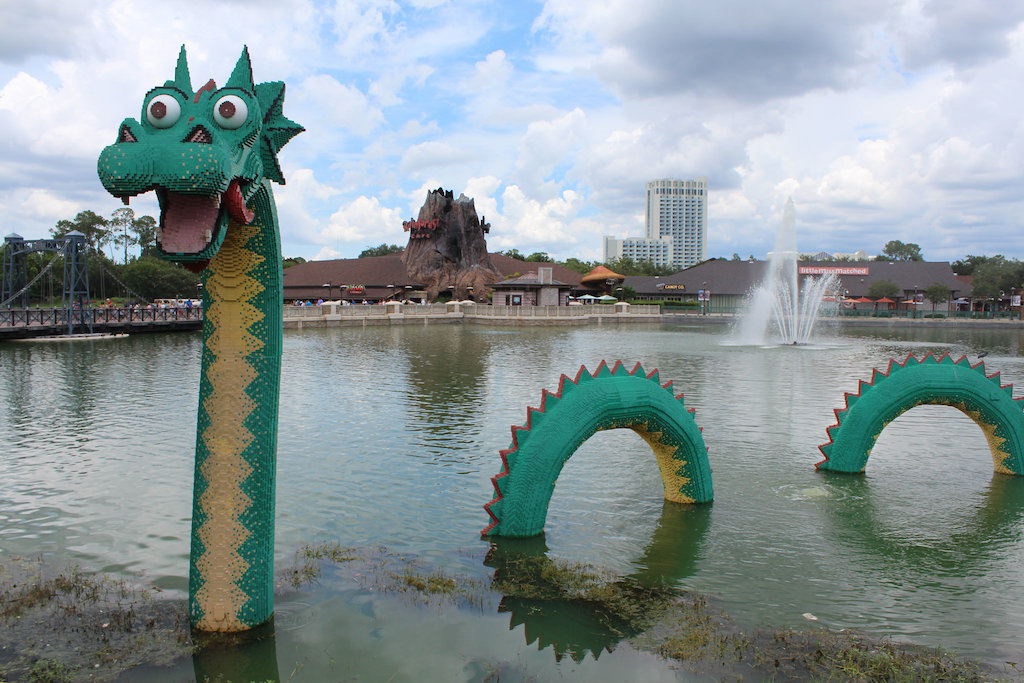 Since 1997, Brickley, a seemingly friendly sea monster, has been winning the affections of many at Disney World. Overall, the creature is made up of 170,000 LEGO bricks and stretches an incredible 30 feet long.

Located in a rural part of the Australian Outback, LEGO engineers created a small forest with life-size versions of trees and flowers to stand tall in the middle of the desert, startling many locals in Broken Hill, New South Wales, after its almost overnight inception in 2012. And for more ways to hone in on your inner LEGO genius, check out these 6 Ways to Become a Creative Genius.

Ashley Moor
Ashley hails from Dayton, Ohio, and has more than six years of experience in print and digital media. Read more
Filed Under
Trivia
Read This Next
Latest News
Read This Next