30 Plants You Should Never Bring into Your Home

Is the boost to your décor worth the risk to your health?

If you haven't noticed, people have been going a little plant crazy lately, bringing endless amounts of indoor plants and greenery into their homes on a quest for Pinterest-worthy perfection. There's an issue, though: not all options will actually make a great addition to your space—and should probably be researched before filling up your car at the greenhouse. Whether they're bad for allergies, harmful for your pets or children, or are borderline impossible to keep alive, you might want to think twice before buying any of these popular options. Getting a bonsai is basically an easy way of having a tree inside your home—just in mini-form. The issue is that the plant can be super-irritating to those with tree allergies. And even if allergies aren't a problem, be careful when watering or pruning it: According to Allergy&Air, pricking your skin can leave you with a rash.

You know to stay away from Poison Ivy, but English Ivy—the plant that often effortlessly climbs up buildings—is fine to brighten up your home with, right? Well, that depends. For some people, the plant can cause an allergic skin reaction, too, resulting in itchiness, a rash, or blisters, says Poison Control. And according to Rover, if your pet ingests it, it could lead to breathing problems, paralysis, or even a coma. 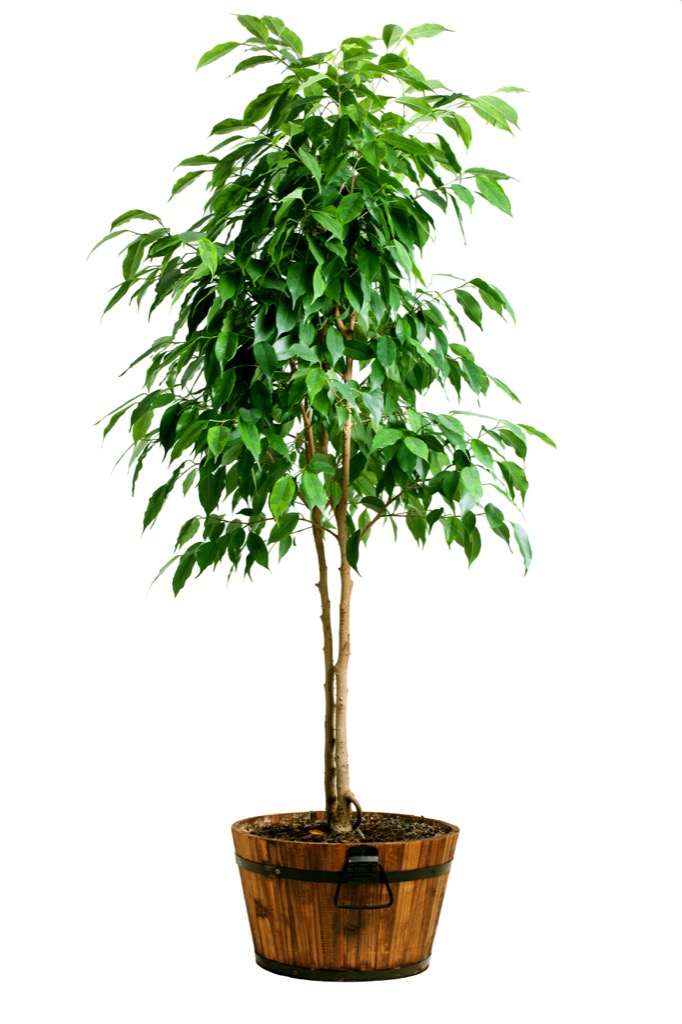 Ficus trees are a common indoor plant, but something not that many talk about? How often you have to clean them. Its waxy leaves collect dust like crazy and need to be wiped down on the regular, so if you don't want to add anything else to your chore list, you might want to find another option to brighten up your space instead. With its pretty pink flowers, oleander is certainly an eye-catching plant. What can happen to you or your pets if you get too close to it definitely isn't, though. According to the Canadian Biodiversity Information Facility, the shrub is incredibly toxic and even a single leaf could be deadly to you or your pets. In fact, in the past, people have even died from using the shrub's twigs as skewers. 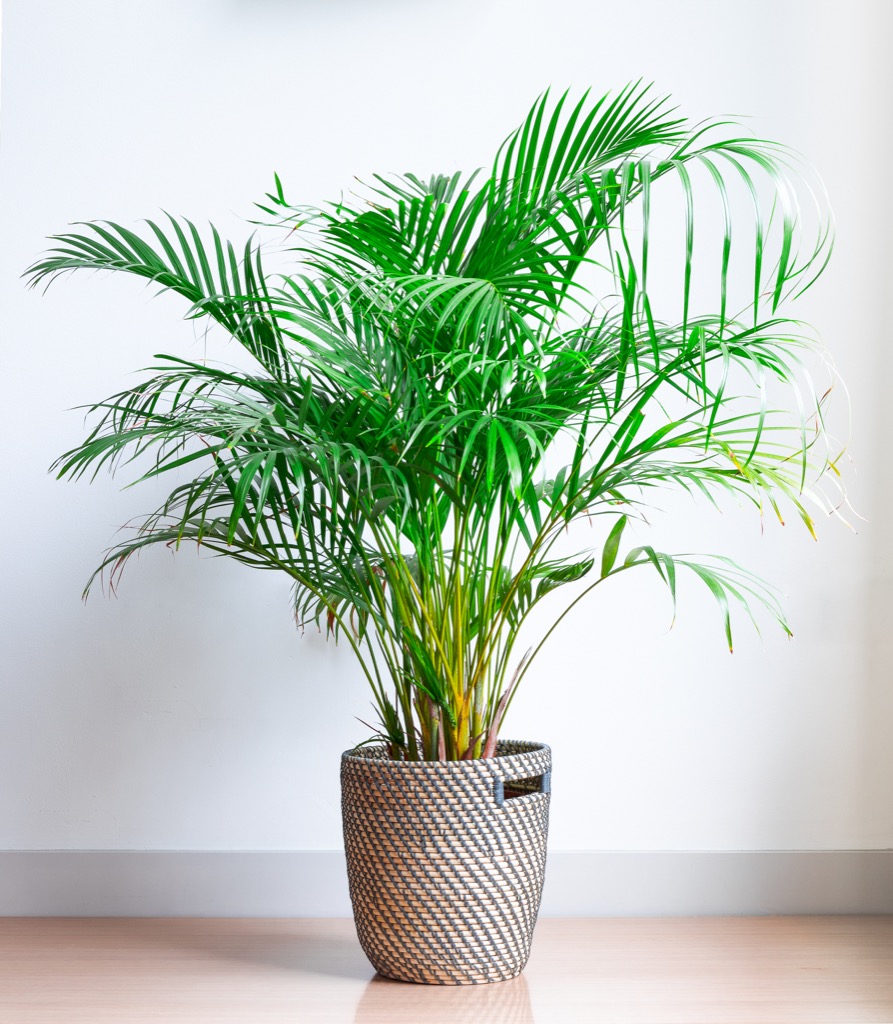 Having palms in your home will instantly make you feel like you took a trip to the tropics. Unfortunately, all those good vibes will be squashed the instant you realize your plant came with an unwanted supply of spider mites. The pricey plant is known for being a magnet for the pest, and they can be very hard to get rid of as they slowly eat away at the leaves. The Euphorbia Trigona is really fun to look at: the cactus-like plant (which is actually a succulent, by the way) grows really tall green stems with plenty of branches. The only issue is that the milky sap the plant contains can seriously irritate your skin—in fact, it's so bad that it burns like fire and can even leave painful blisters and possibly result in blindness if it gets into your eyes, says Thomas Osborne, MD. 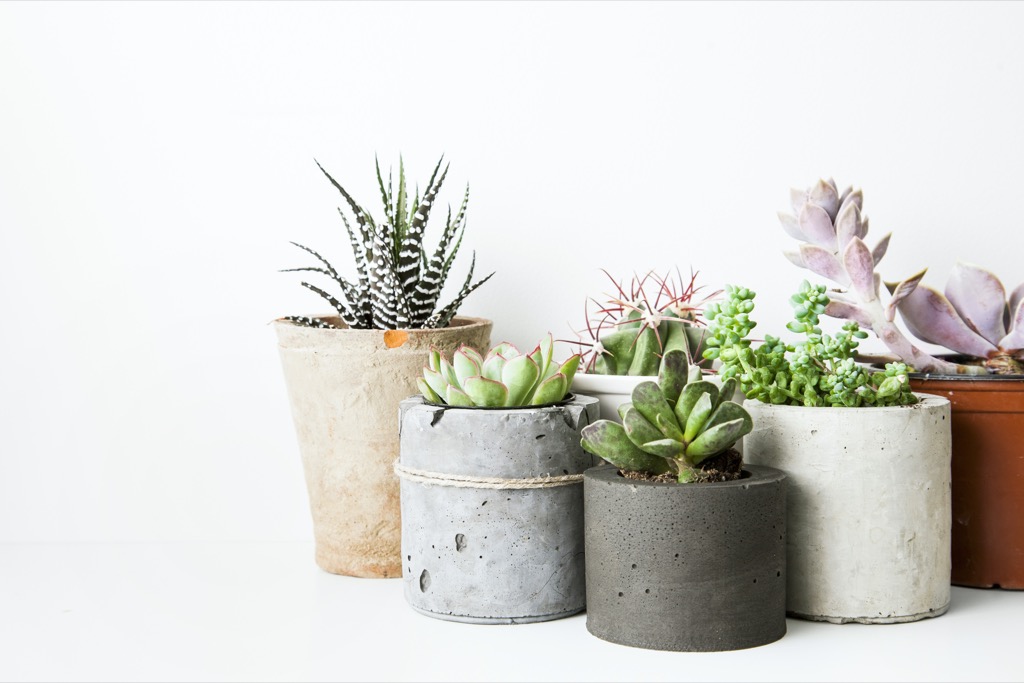 Succulents are popping up everywhere in people's homes: they're inexpensive and super cool-looking, so why not stock up? If you do decide to bring a batch home with you, just be careful. They can be infected with mealybugs, which are teeny tiny insects that spread incredibly fast to other plants and are really hard to get rid of. One of the best ways to make your home more tropical is to invest in some greenery. You might not want to choose ferns, though: Not only are they incredibly picky and hard to keep alive due to needing a rainforest-like growing environment, but they're also a little outdated. While they used to grace every home and doctor's office 20 years ago, there might be a trendier—and easier-to-grow—variety to get your indoor greenery fix. Cyclamen are pretty flowering plants that unfortunately come with a not-so-pleasant drawback: They're known to be infested by vine weevils. The pests are hard to control once they come about because they wreak havoc in a couple different ways: While adults eat the leaves, the larvae attack the root system underground. That's a recipe for disaster.

If you have a Caladium—an "Elephant Ear"—be careful. It's pretty, but it's also one of the most toxic plants to cats and dogs, causing swelling, burning of the mouth and tongue, and vomiting if it's ingested, says Pet Poison Helpline. 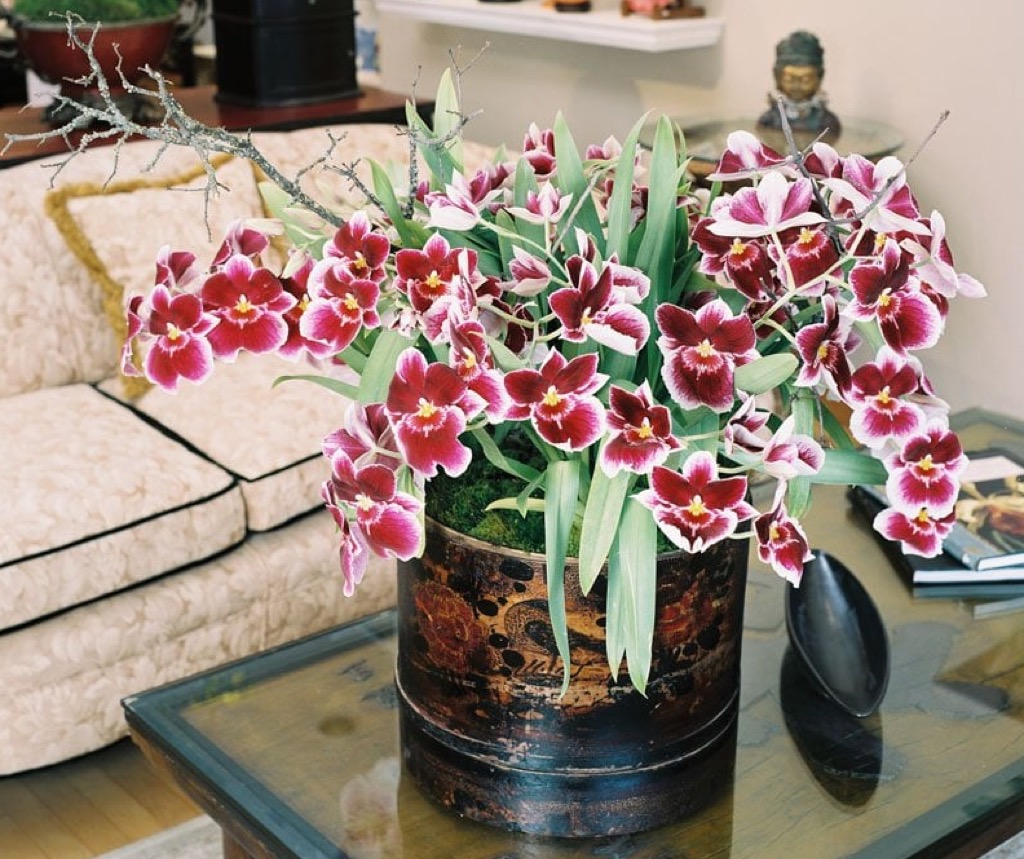 Keeping an orchid alive is a true miracle only those with the greenest of green thumbs can master. Because the tropical plant needs bright, indirect sunlight and a watering schedule that's not too much—but also not too little—it can be hard to make it happy. Dumb Cane is a really unique house plant—just not one you probably want to have in your home, espceially if you have pets. Because it contains calcium oxalate crystals, a cat or dog that's ingested it could end up with everything from severe swelling and burning of the mouth to difficulty breathing or even death. 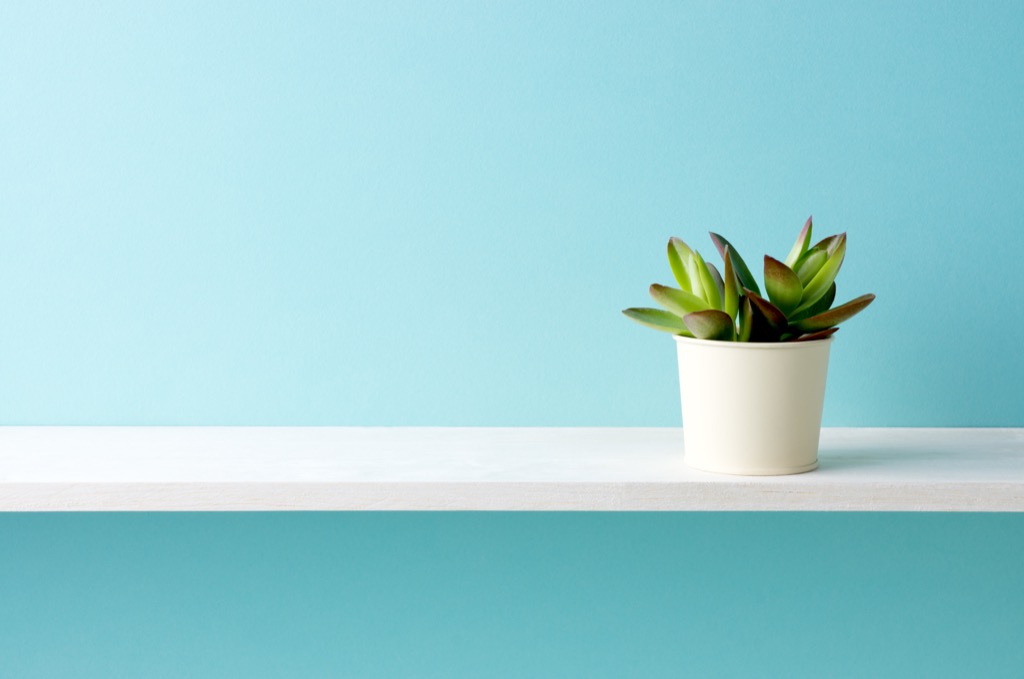 Jade is a beloved house plant because of how easy it is to take care of—and how big it can eventually grow—but it's not a good choice to have around your pets. Though it's pretty, it can cause gastric distress, heartbeat irregularities, and even depression, says Wag. 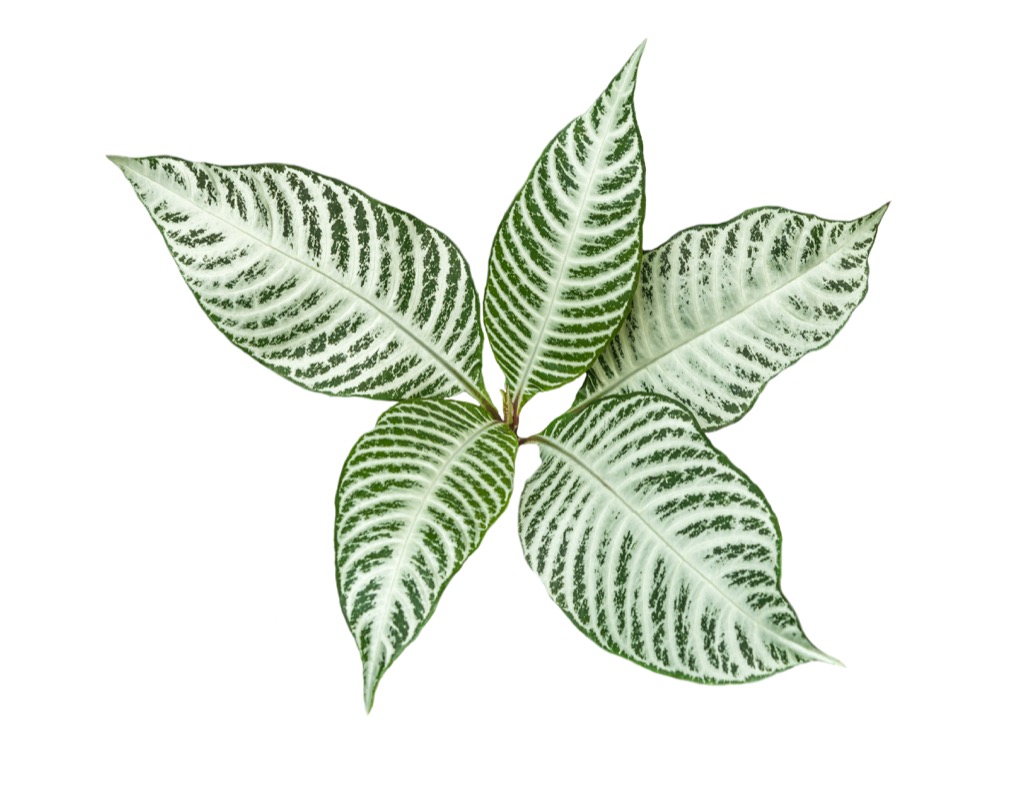 Unless you want to keep your house at a solid 70º Fahrenheit all year long, the Zebra plant isn't for you. Sure, it looks cool—but you really have to love it to help it survive, making sure it gets just enough sunlight and humidity. The Potos plant—or Devil's Ivy—is one of the best plants to have in your home to purify your air. Sadly, though, it's also one of the worst to have around if you have pets. In humans, ingesting the plant can cause irritation, burning, vomiting, and diarrhea, but in cats and dogs the aftermath can be much worse, causing choking, swelling, difficulty breathing, and even renal failure or death.

Years ago, fake plants used to be everywhere. Not only do most varieties look fake with their plasticy leaves, but they also serve no purpose: they don't clean your air like real varieties and basically just collect dust. Instead of investing in the pricey faux options, go for some easy-to-manage real ones that will actually benefit your home and your health.ae0fcc31ae342fd3a1346ebb1f342fcb 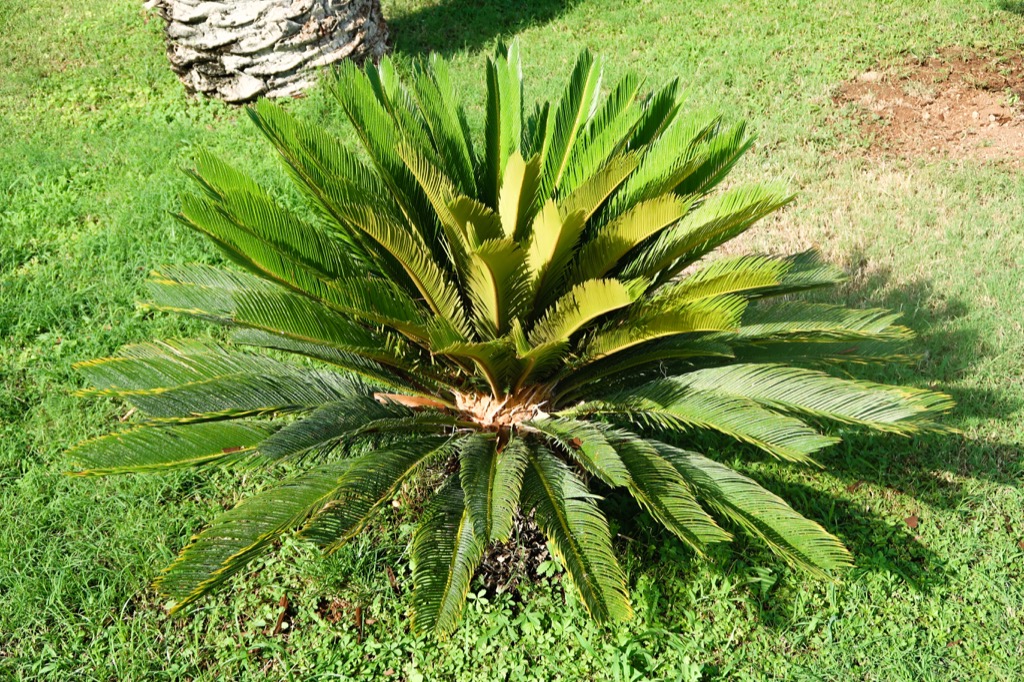 You've probably seen the Sago Palm around: It basically looks like a mini potted version of what's everywhere in Florida. While it adds a tropical touch to any room, every part of it is poisonous to animals and can cause everything from minor issues like diarrhea to something super-serious like liver failure or death, says the ASPCA. 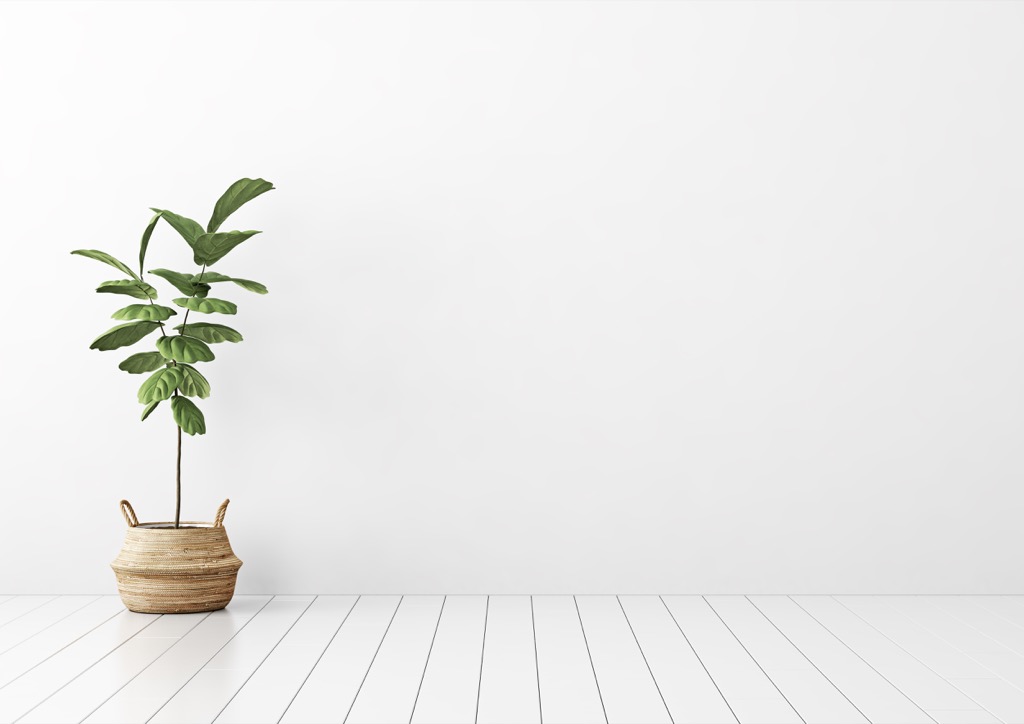 If you can keep a fiddle-leaf fig alive, major props. According to Bob Vila, the plant is super-popular but oh-so-difficult. If it gets too much or too little light, it'll wither. And if you even try to save it by moving it, it will also do poorly because it hates any sort of change in environment. Yep, "hard to please" is an understatement. 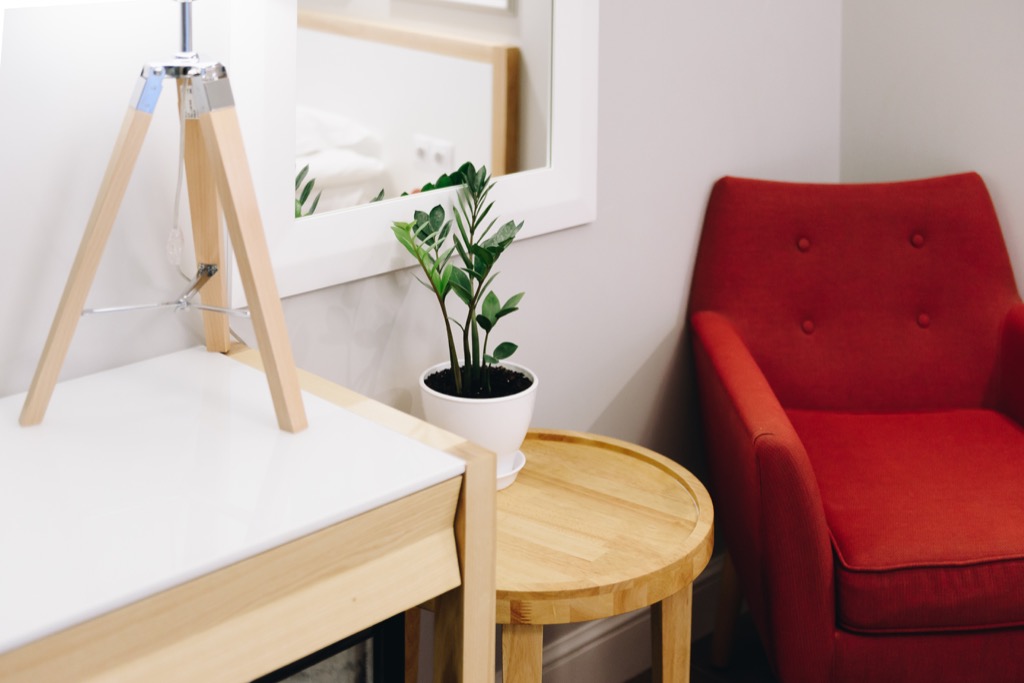 The ZZ plant is by far one of the most unique plants you can add to your indoor jungle—and it's pretty durable, even in low-lighting. Of course there's a negative, though, and that's because the entire thing is poisonous and can be incredibly toxic to kids and pets, causing pain or a burning sensation if ingested or rashes simply from touching it. 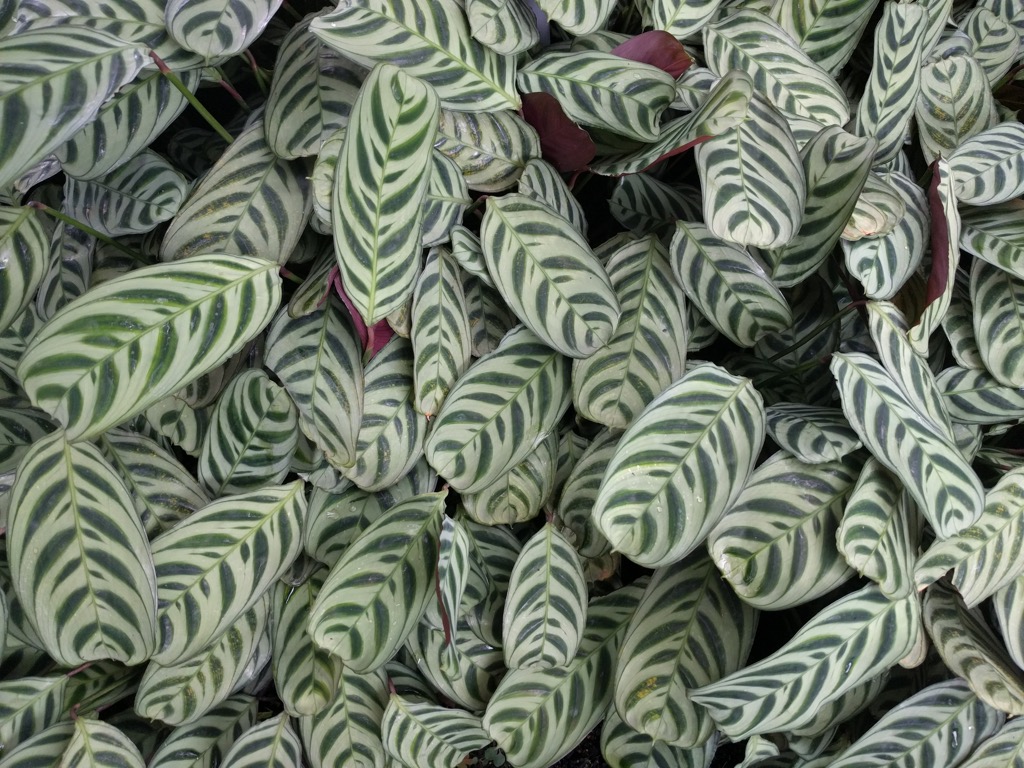 Ctenanthe—a plant native to South and Central America—has beautiful designs, but it can be incredibly hard to grow. If there's too much or too little light, the leaves will lose their prettiness, getting dull or turning totally green. And if you aren't able to give it a high-humidity atmosphere, forget it: it's probably not going to last long. The Jerusalem Cherry plant grows tiny red and orange berries, making it a pretty festive house plant. Unfortunately, kiddos are attracted to those delicious-looking berries that just so happen to be poisonous, causing everything from headaches and diarrhea to paralysis and slowed breathing. It can also cause health problems with pets too, like diarrhea, vomiting, and seizures. 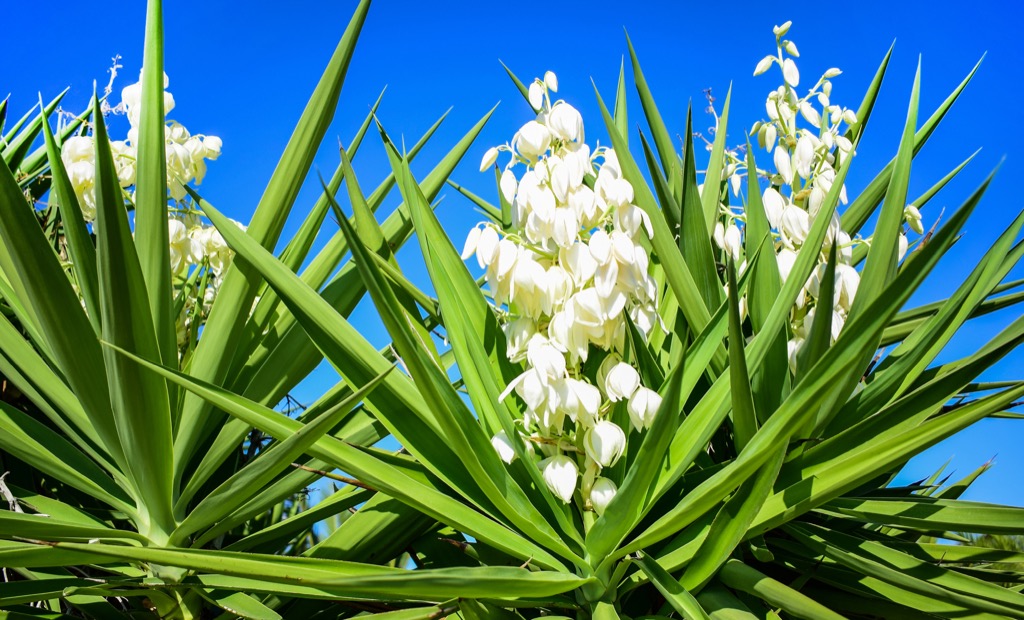 The Yucca plant is one of the coolest-looking. For allergy sufferers, though, it can cause some serious problems, making you all sorts of sneezy, says Flonase. Instead, opt for plants that help get those allergens out of the air in your home like snake plants, which are very easy to care for.

Every holiday season, poinsettias show up at every grocery store and families take a couple home with them for a festive decoration. Unfortunately, despite it being pretty, it can also cause some health problems: They can give you a rash if the white milky sap gets on your skin, and if your cat and dog eats it, they could experience vomiting, diarrhea, and skin irritation. 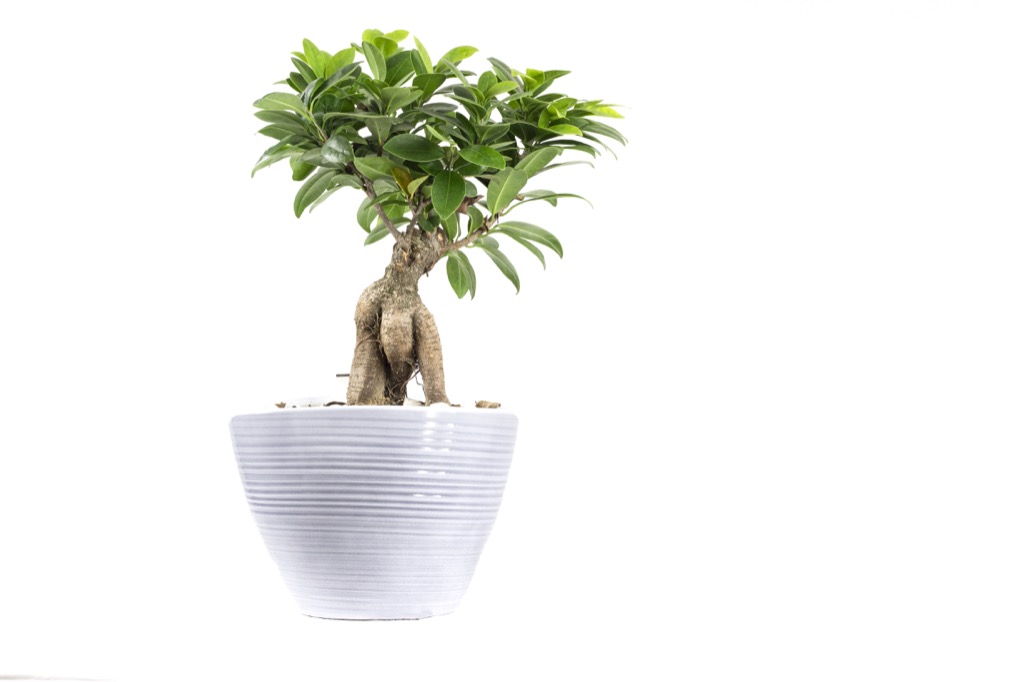 Palms aren't the only plants that can easily get infected with spider mites. Umbrella trees are also susceptible to the tiny pests, which spin webs around the plant and kill its leaves. That's not all, though: They're also prone to aphids and scale bugs. So while they're cool to look at, bringing one into your home can come at a cost. Another holiday, another plant. Once Easter rolls around, so does the Easter Lily—a white flower that smells just as nice as it looks. Just be careful: It's non-toxic to dogs, but it can affect your cat, potentially causing vomiting, lethargy, kidney failure, or death if it's ingested. According to the ASPCA, they're evidently the only animals that are affected.

Everyone thinks air plants are so easy to take care of, but don't be fooled: Contrary to popular belief, they don't just live off of air and actually require more attention than most house plants. The plants need bright, indirect sunlight and must be soaked then dried regularly. Then when you're not taking the time to soak them, you'll most likely still need to mist them between waterings to keep them looking fresh. 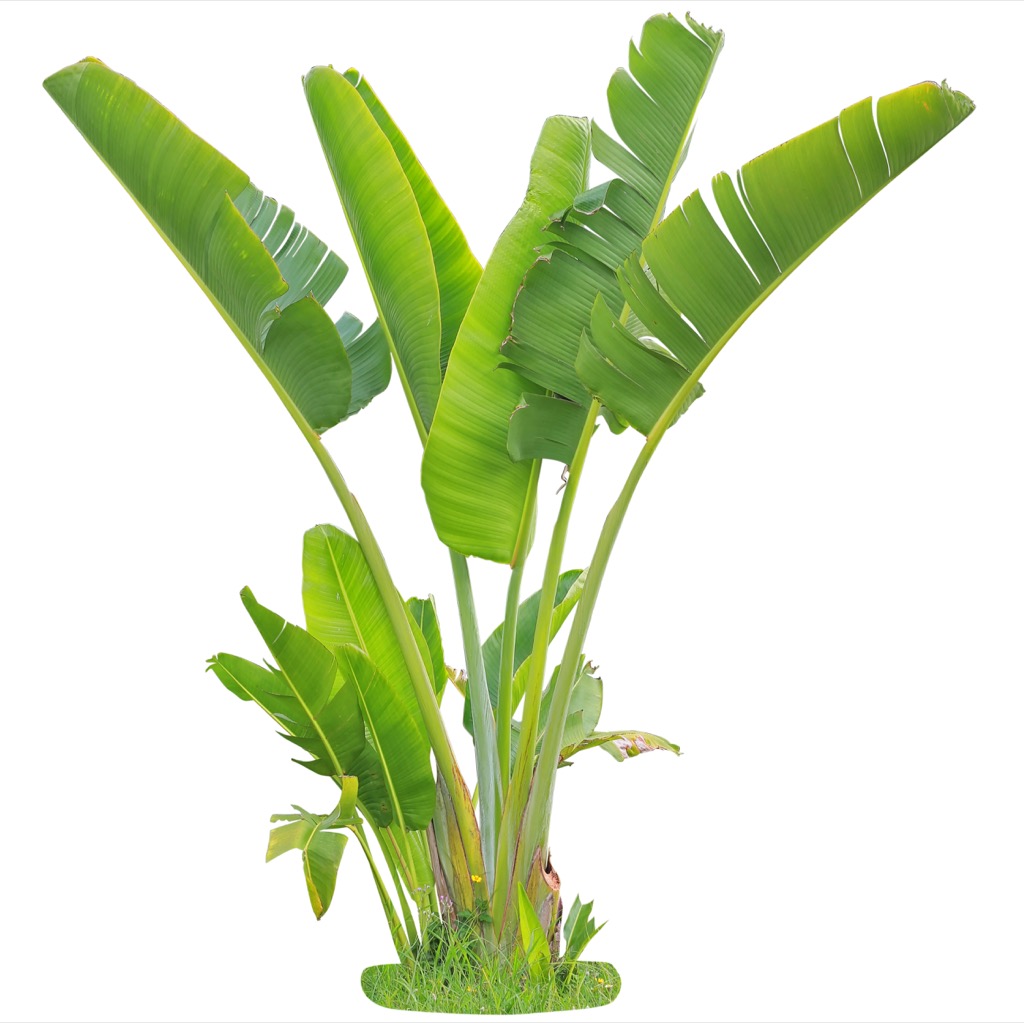 Banana tree plants instantly make any home look trendy. Get ready to work, though, if you bring one home: According to Plant Care Today, there are some important requirements you have to keep up with, including providing it with consistent warmth, moisture, and humidity—something that's especially hard during the winter months. 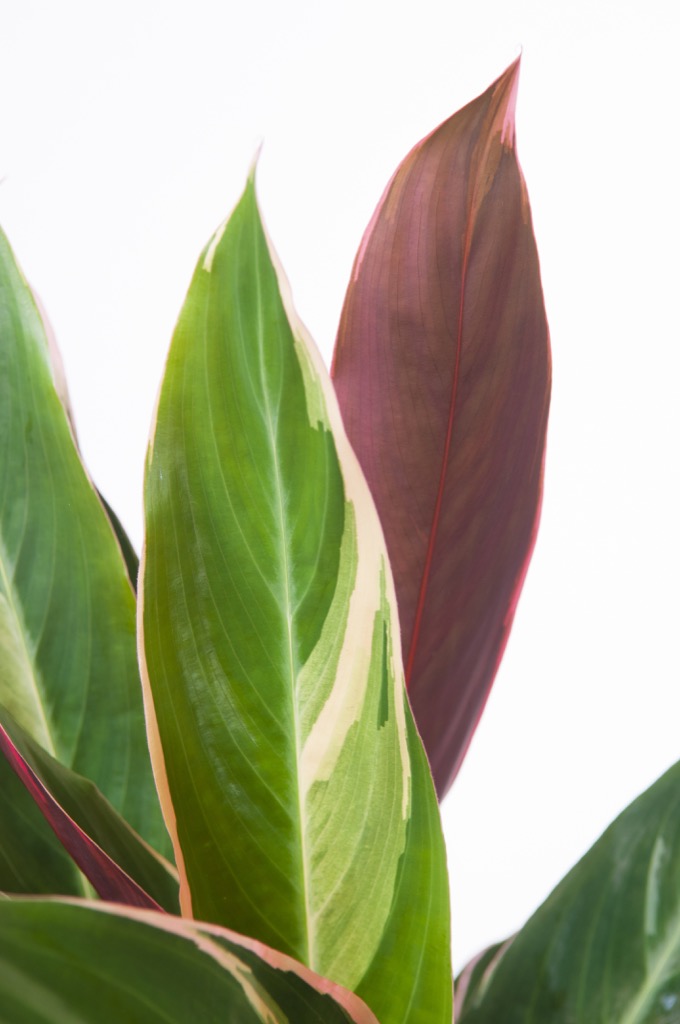 Triostar Stromanthe produces stunning white, green, and reddish-pink leaves. Like many other plants, though, its need for a high-humidity environment makes it hard to grow indoors. Not only does it need some shade since its leaves can get sunburnt, but it also needs to be misted regularly to thrive, say researchers from the University of Florida. 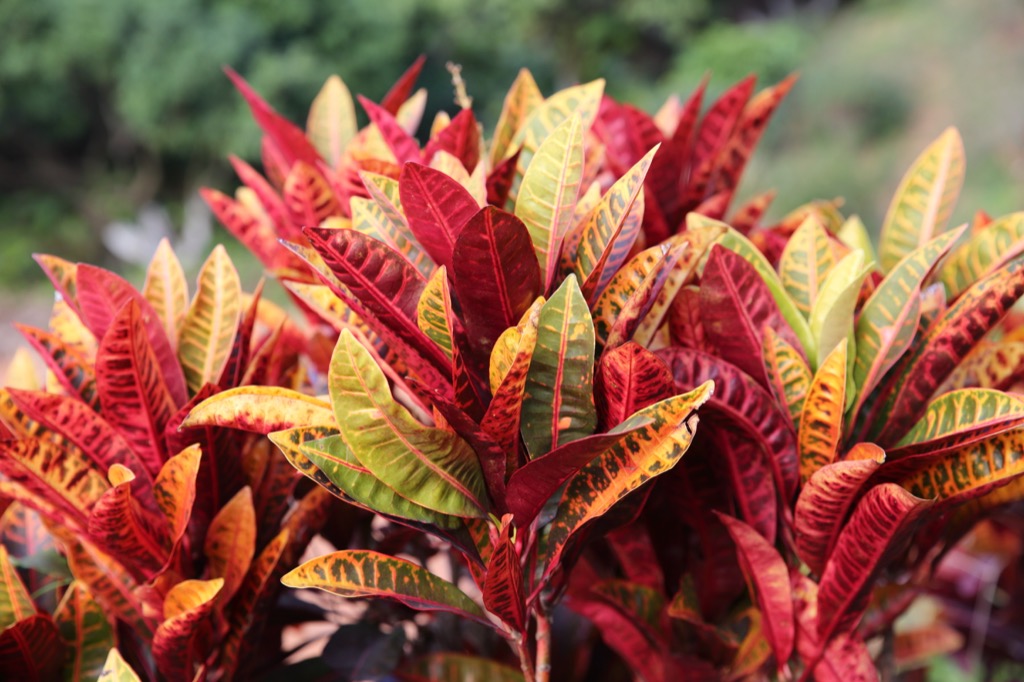 The croton plant comes with stunning green, yellow, red, orange, and pink leaves—basically, it's a rainbow. The problem is while it might look great at the greenhouse, it doesn't like being moved and can immediately lose most of its leaves when you do, says Gardening Know How. It can recover from that loss, but unless you have a set place to keep it and are up for giving it the high-humidity environment it needs, it might not be the best choice.

Spider Plants are known for being able to improve the air quality in your home. Unfortunately, they're also one of the worst options for allergy sufferers. If you notice you're having issues after bringing one into your home, give it to an allergy-free friend, stat.