"Anything else in the Box, Pandora?!"

On Wednesday, Frasier fans everywhere went into a fit of apoplexy when Deadline broke the news that Kelsey Grammar is currently considering pitches from writers about a proposed reboot of the beloved show, which ran from 1993 to 2004. Right now, there are no details about a potential plot, though that hasn't stop the most ardent admirers of the show to envision what it would be like in the today's day and age (i.e., Frasier and Roz have a successful podcast while he and Niles try—and fail—to create an app about how to pair the right wine with any food).

Unfortunately, the reboot would have to move forward without one of its central characters, as John Mahoney, who portrayed Frasier's lovably cranky, blue-collar dad, passed away last February. But the revival of the series could still be a huge success, since, like Will and Grace, the brilliance of the show depended not on its plot or character development so much as the witty dialogue and the endlessly quotable comebacks.

The original series found a second life in streaming, and has, to the surprise of many, proven extremely popular among Millennials. Many attribute this to the fact that, like me, lots of Millennials grew up watching the show as children. But there's more than '90s nostalgia at play here. Despite the fact that he is middle-aged when the show begins, Frasier's personality exudes many of the attributes ascribed to Millennials: he's spoiled, vain, self-centered, and overly preoccupied with how people perceive him (the episode in which he messes up a relationship with a supermodel because he's consumed with the need to prove to everyone she exists could easily have taken place in today's social-media-obsessed culture). And his love life closely mirrors that of other Millennials, who are constantly single because we are, according to dating coaches, way too demanding.

But Frasier would also be a great show to revive for the same reason that so many people prefer binging on The Office to watching the news, and the same reason Netflix is dropping dozens of comedy specials. In today's depressing and troubling times, people are seeking comedy as a way of couching the brutal reality of day-today life. While television today is, arguably, more of a high art than the laugh-track sitcoms of yesteryear, it seems people are growing tired of gritty dramas like Handmaid's Tale, which hit a little too close to home.

What follows is a short-list of some of the best jokes from the long-running show to get you excited about the potential reboot. So read on—and keep your hopes up! And for more hilarious humor from your favorite shows, check out The 30 Funniest Sitcom Jokes of All Time.

1
"Abe Lincoln had a brighter future when he picked up his tickets at the box office!" 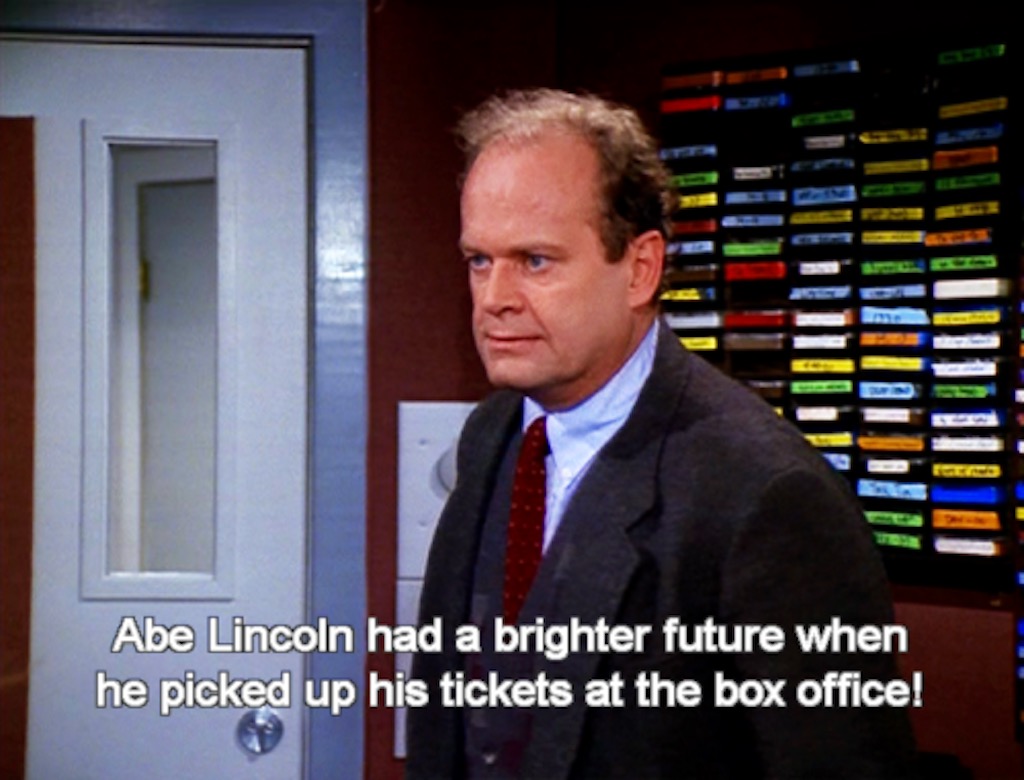 In season 3, episode 24, Frasier remembers his disastrous first day as a radio show host. When, following a bad call, he walks in on Roz trying to get transferred onto another show, he whips out this amazing line, which I still use when people ask about my dating prospects. 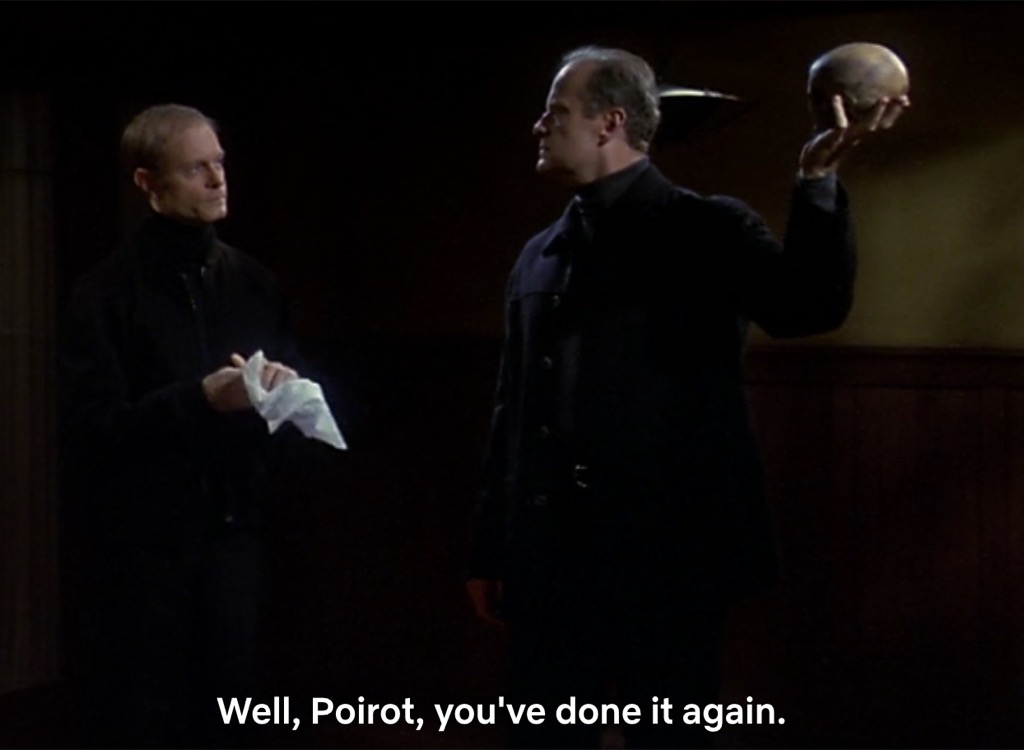 In season 9, episode 19, Frasier and Niles uncover a human skull under their childhood home, forgetting that they took it from a school production of Hamlet, and imagine that the new owner was involved in a grisly murder. While holding up the skull, Frasier says, "One thing is certain. Someone is very dead," to which Niles quips, "Well, Poirot, you've done it again." Also an excellent line to use when someone says something painfully obvious, as an alternative to SMH.

3
"If I were using that microscope right now, I still wouldn't be able to locate my interest in your problem." 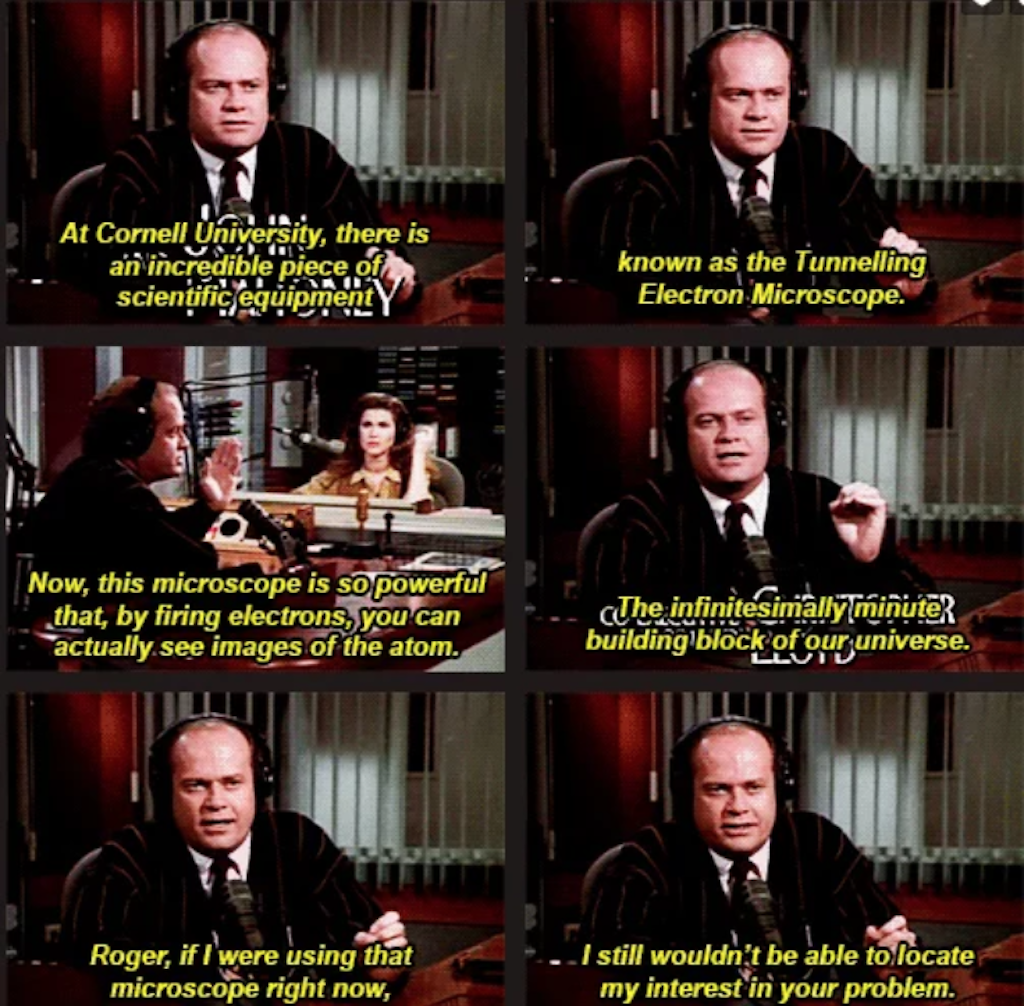 In season 1, episode 9, Frasier is listening to an insufferably boring caller, and responds with, "At Cornell University they have an incredible piece of scientific equipment known as the Tunnelling Electron Microscope. Now, this microscope is so powerful that by firing electrons you can actually see images of the atom, the infinitesimally minute building blocks of our universe. Roger, if I were using that microscope right now… I still wouldn't be able to locate my interest in your problem." This is a great line when someone is complaining about something insanely petty.ae0fcc31ae342fd3a1346ebb1f342fcb

4
"Copernicus called, and you are not the center of the universe!" 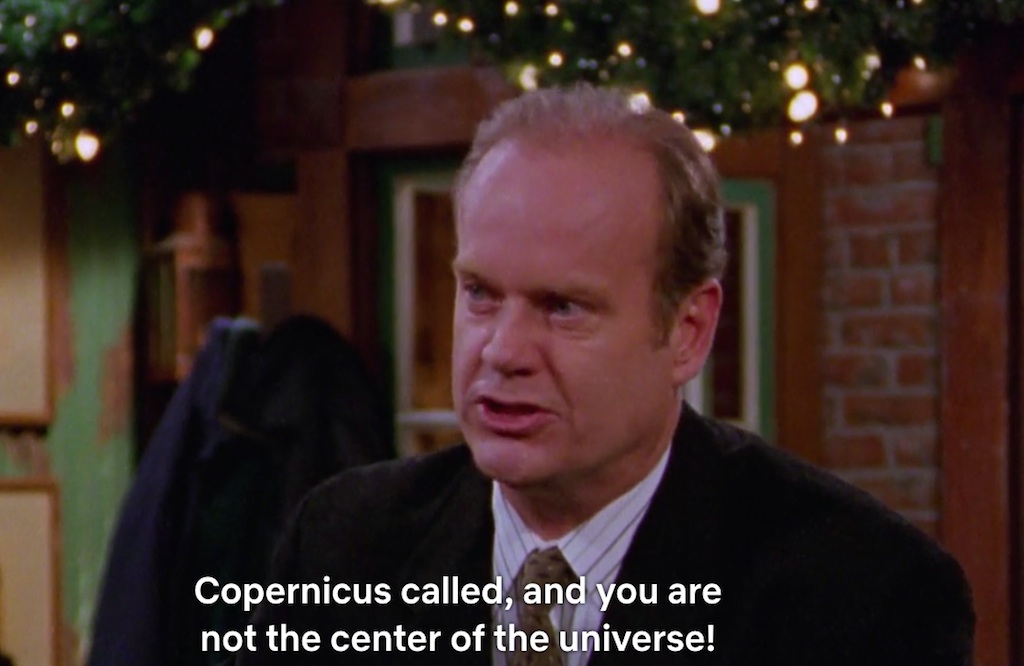 Frasier always had the best holiday episodes, and this one, from the 10th episode of season 10, contains one of the show's most oft-quoted lines. Niles, Martin, and Frasier are arguing about the infamous "Dancing Santa," and Niles says, "Why do you have to make everything so difficult." So Frasier responds with, "Excuse me Niles, but I have news for you. Copernicus called, and you are not the center of the universe!" And for more '90s holiday nostalgia, check out 16 Ways Christmas Was Better in the 90s.

5
"Anything else in the Box, Pandora?" 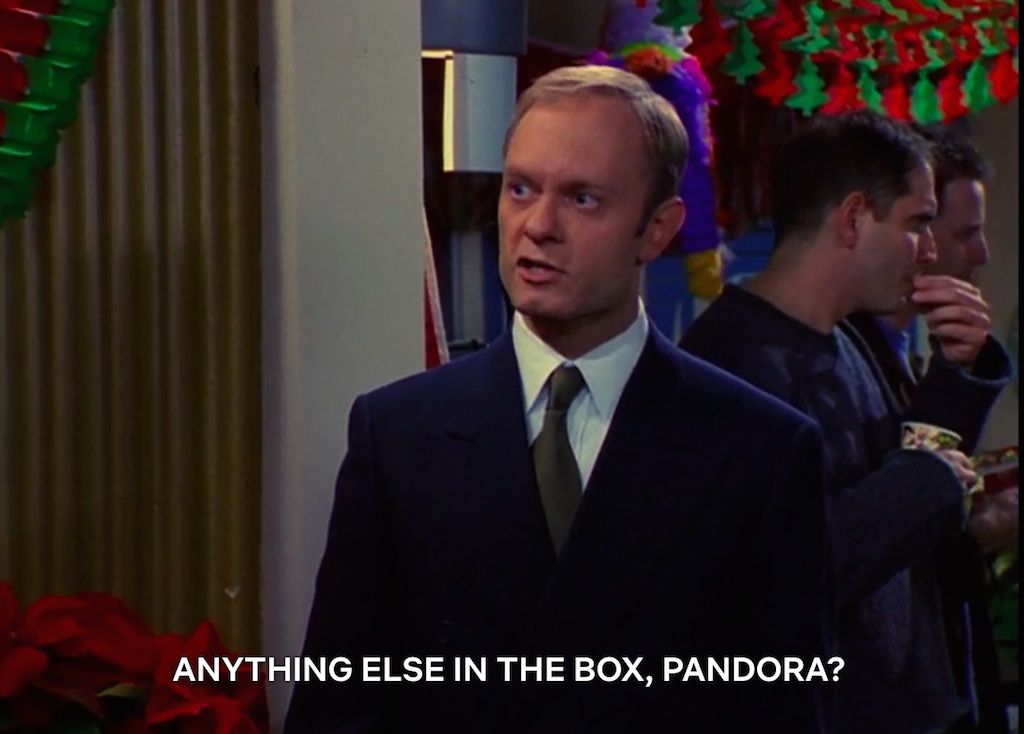 Season 7, episode 11, is another incredible Christmas episode. At a holiday office party, Frasier accidentally lets slip to Niles' new girlfriend, Mel, that Niles had recently seen his ex-wife, Maris. In response, Niles exclaims, "Anything else in the Box, Pandora?" which is a great line to use whenever one of your own friends invariably reveals a drama-causing secret. 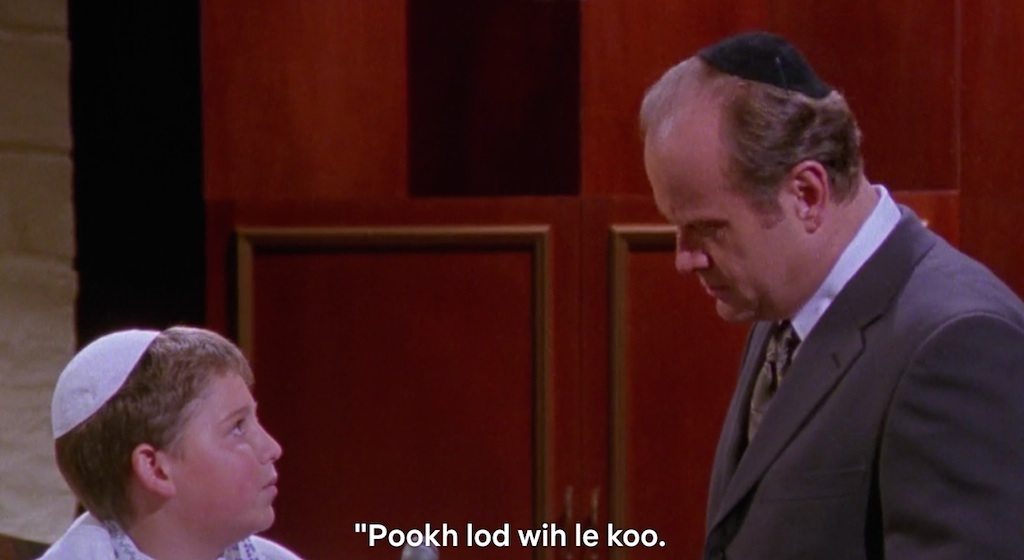 Unlike most of the jokes on this list, this isn't a quotable line so much as one of the funniest moments on the show. In season 10, episode 6, Frasier asks his nerdy co-worker, Noel, to help his translate the blessing he's written for his son's Bar Mitzvah into Hebrew. Noel gets mad at him for failing to get an autograph for him at a Star Trek convention, so, as revenge, he translates Frasier's speech into Klingon instead. Kelsey Gramma's delivery of what is clearly supposed to be a beautiful, heartfelt message to his son in Klingon is break-your-ribs hilarious. Luckily, Laughter Offers 20 Crazy Health Benefits—No Joke!

7
A Great Joke Between Friends 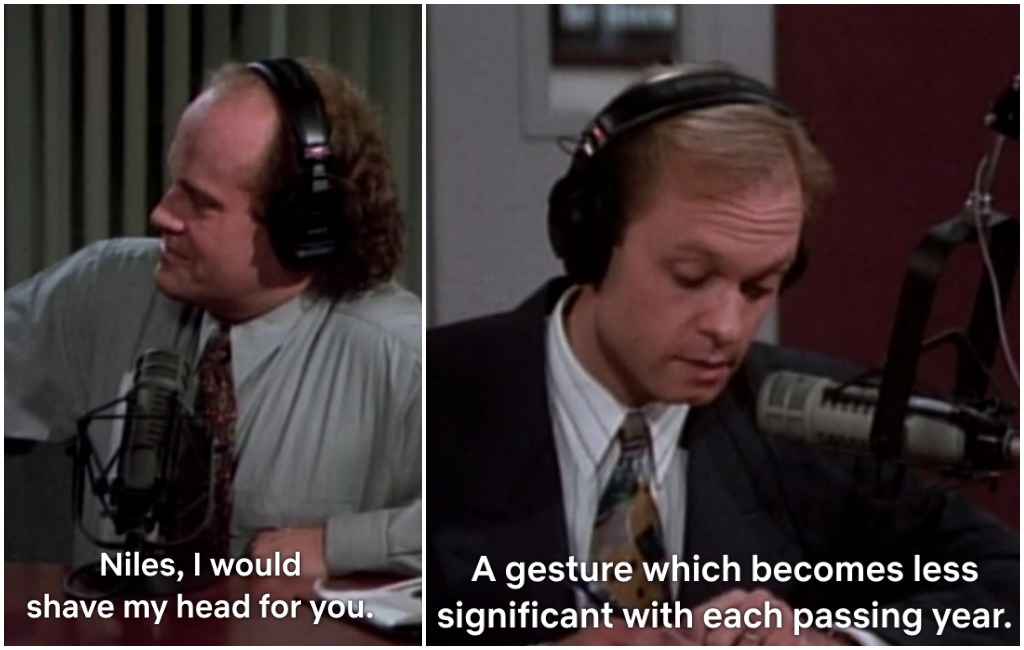 One of the show's best quips is in season 1, episode 22. Frasier, whose hair is clearly thinning out, tells his brother, "Niles, I would shave my head for you," to which Niles replies, "A gesture which becomes less significant with each passing year."

8
"Not since Quasimodo strolled the streets of medieval Paris…" 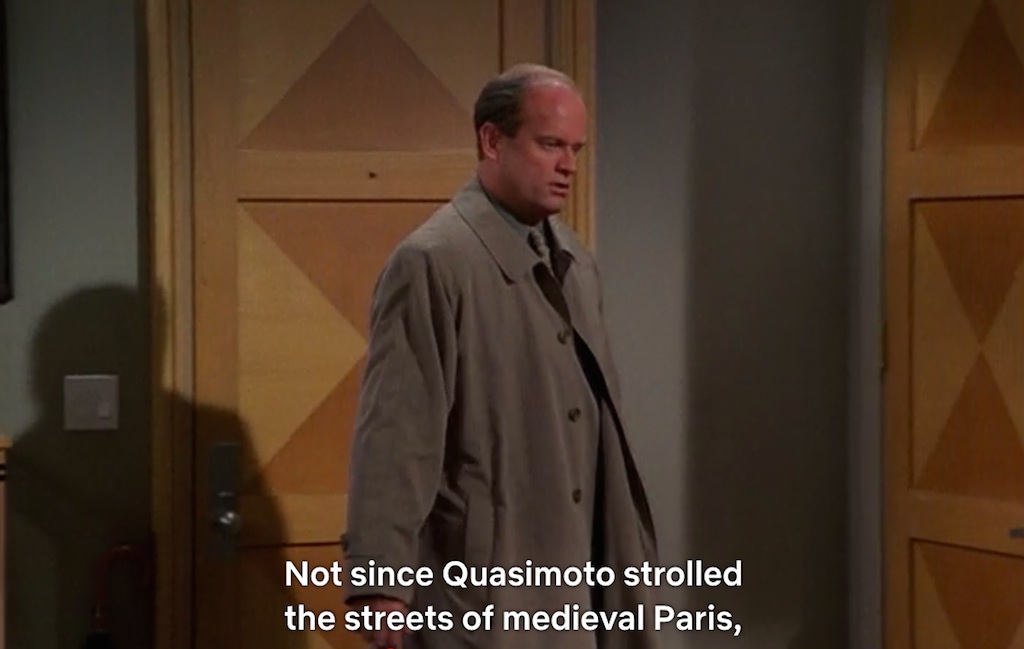 Season 4, episode 24, is a great example of how Frasier supplies lines that are extremely useful for the forever lovelorn. Frasier dines alone in a romantic restaurant, bringing his solo status sharply into focus. When he comes home and his father asks how the dinner went, Frasier brilliantly replies, "Not since Quasimodo roamed the streets of medieval Paris have so many people uttered the phrase, 'That poor man.'" (Despite the hilarity of the script, it appears the show's closed-caption writers didn't pay proper-spelling homage to Quasimodo—that poor man.) 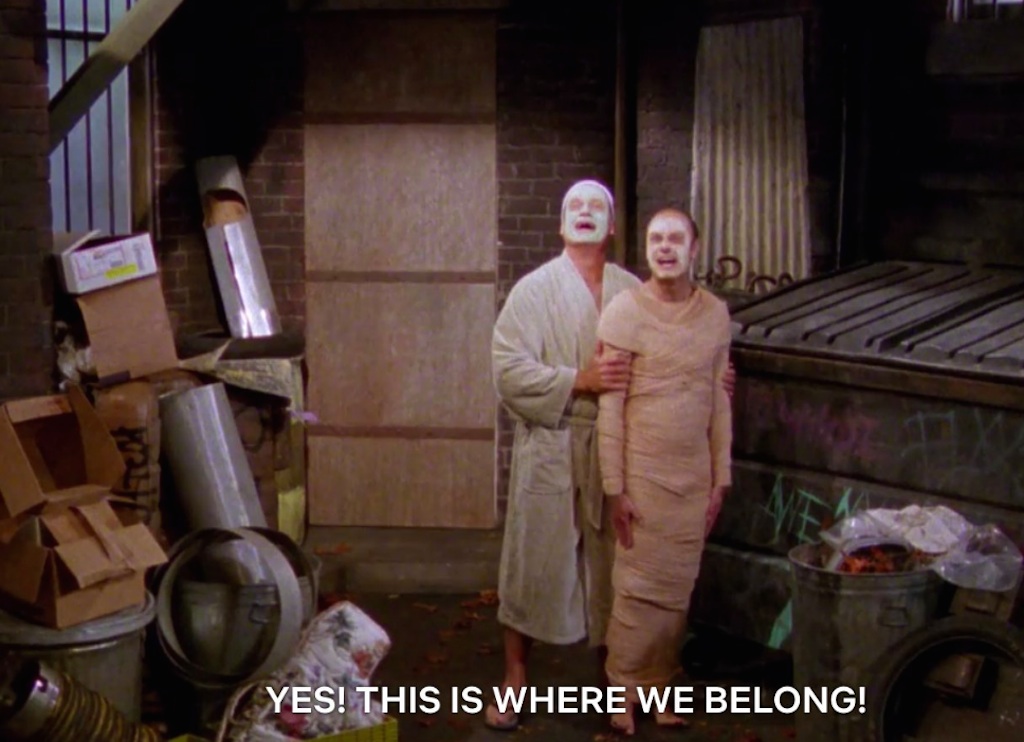 This, too, is one of the funniest moments on the show, as well as a great example of how the sitcom seamlessly blended slapstick comedy with genuine intellectual depth. In season 10, episode 11, Niles and Frasier score entry into an exclusive spa, but can't be happy until they know they have managed to get into it's most exclusive area. After scrambling to make it through the "gold door," they are lounging in the relaxation grotto when they notice there is a "platinum door." When the attendant tells them they can't go through there, they become obsessed with doing so.

"What are we doing?" Frasier exclaims, "Niles, this is heaven. Right here and now. Why do we have to think about someplace else?"

"This is only heaven for the people who can't get into the real heaven," Niles responds, perfectly illustrating how it feels to have the trademark Millennial malaise of FOMO.

He and Niles, who is mummified following a treatment, manage to shimmy through the door, only to find themselves in a dumpster alley. In addition to being one of the best bits of physical comedy ever portrayed on television, it serves as a fantastic allegory for the hedonic treadmill. 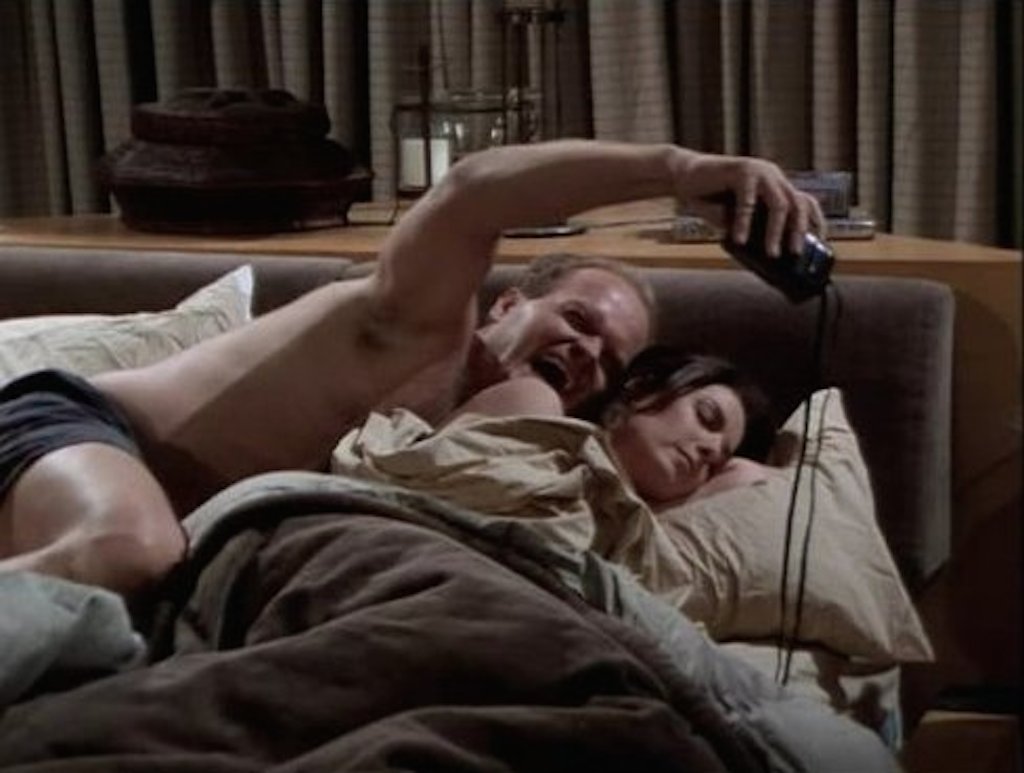 Season 5, episode 1, is one of the clearest examples of how Frasier is, in fact, a Millennial. He brings home a stunning, intelligent supermodel from his trip to Acapulco, and her only request is that they keep their relationship between them for now so as to avoid tabloid speculation. Easy, right? Not for Frasier, who becomes obsessed with proving to his family members that she actually exists, much like today's heavy social media users, who abide by the ironclad rule "pics or it didn't happen." The best part is that even when she storms out on him at the end, he's not upset about losing out on a great potential match so much as thrilled that his family finally got proof of her existence.

Diana Bruk
Diana is a senior editor who writes about sex and relationships, modern dating trends, and health and wellness. Read more
Filed Under
Funny • Humor • Jokes • TV
Read This Next
Latest News
Read This Next