20 Photos of 1980s Home Décor to Overwhelm You With Nostalgia

Anyone who grew up in the '80s can tell you it felt like a different century, not just a different decade. Huey Lewis and the News was topping the charts, Members Only jackets weren't just something people wore at costume parties, and the hair was bigger than ever. One of the most noticeable differences between today and the era of Reaganomics, however, is the aesthetic decisions we made inside our homes.

From glass brick walls to floor-t0-ceiling chintz, the '80s gave rise to countless interior design trends that are little more than a distant memory today.  So, take a trip back in time with us as we explore the home trends anyone who lived through the '80s can't help but feel a little nostalgic for.

Were they a wall? An interior window? Or just a plain bad idea? No matter what your take is on the glass brick trend, there's no denying that these clear blocks were everywhere in the '80s. For example, here they are in 1989's Look Who's Talking, starring Kirstie Alley and John Travolta.

Despite their popularity in '80s design, glass bricks weren't actually created in that decade—or even that century. The Falconnier Hollow Glass Brick, created in the late 1880s by architect and engineer Gustave Falconnier, was an early model of the '80s glass blocks we know and love (or hate) today. While they're largely seen in motels today, vertical blinds were a major trend in ultra-modern '80s décor. However, their questionable window coverage—coupled with their frequent breakage—have made them mostly a thing of the past.

If your home had honey oak cabinets in the '80s, you're far from alone. They were even featured in 1985's Teen Wolf, pictured here.

For many designers, the trend will forever be an emblem of the decade's style. "Those orangey oak cabinets that were so overused in '80s," says HGTV star Tyler Wisler. "They just reek of acid-washed jeans, big perms, and Sweatin' to the Oldies."

It may have been called Memphis Design, but the colorful geometric patterns that adorned '80s homes—and Saved by the Bell's The Max—actually came from Italy. The inspiration for its name was lifted from "Stuck Inside of Mobile With the Memphis Blues Again" off Bob Dylan's 1966 album Blonde on Blonde. And despite the popularity and proliferation of their products, Memphis Group—the folks behind those rainbow accents—only worked as a collective for seven years. 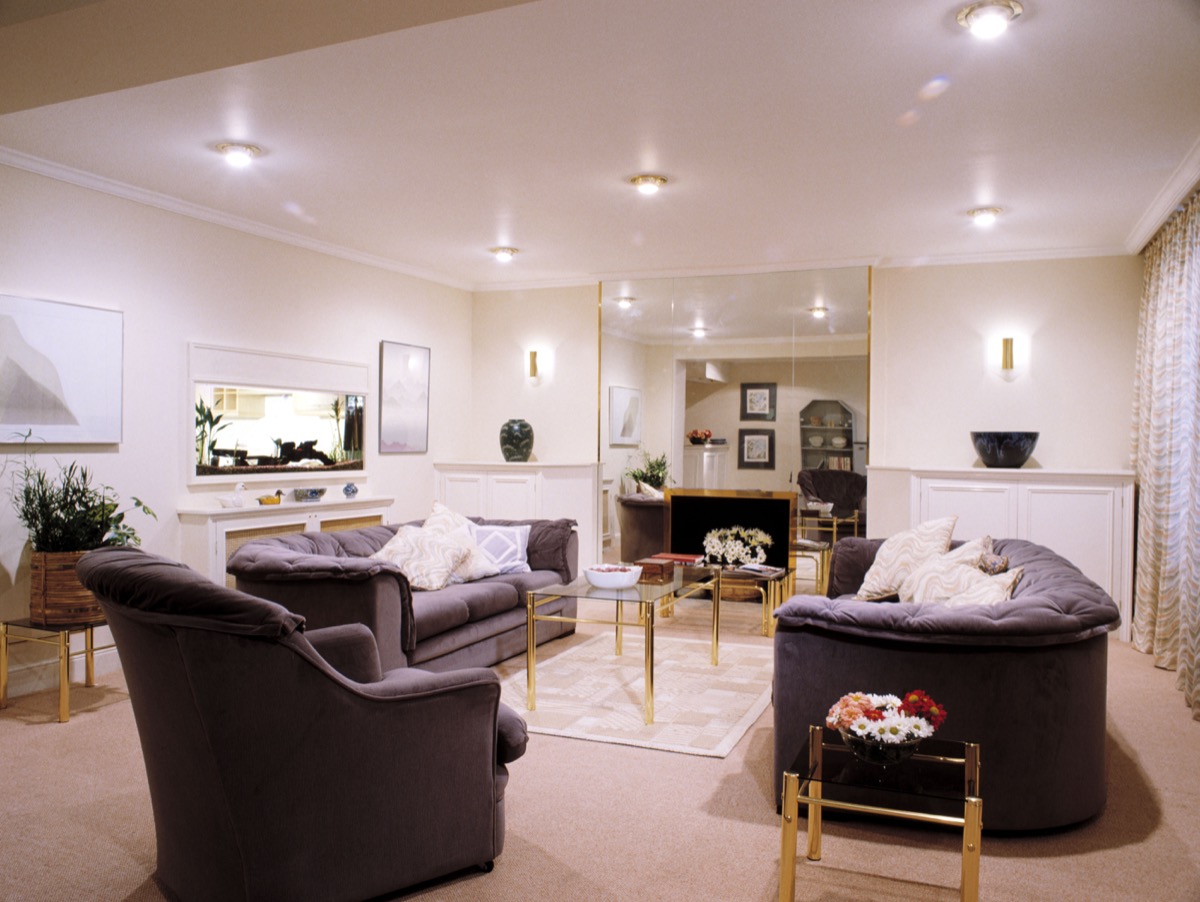 Taking a page from the Art Deco trends of the early 20th century, clear furniture was back in a big way in the 1980s. Thanks to the increasing popularity of Lucite during this decade, the clear furniture trend took on new life.

While virtually any floral bedding was a hit at the time, Laura Ashley's frilly, girly collection was particularly popular among the era's more fashionable home designers.

The stuffy aesthetic took over the bedrooms of countless young women during the '80s. For example, here's Kim Basinger sulking on a very floral bedspread in 1988's My Stepmother Is an Alien. 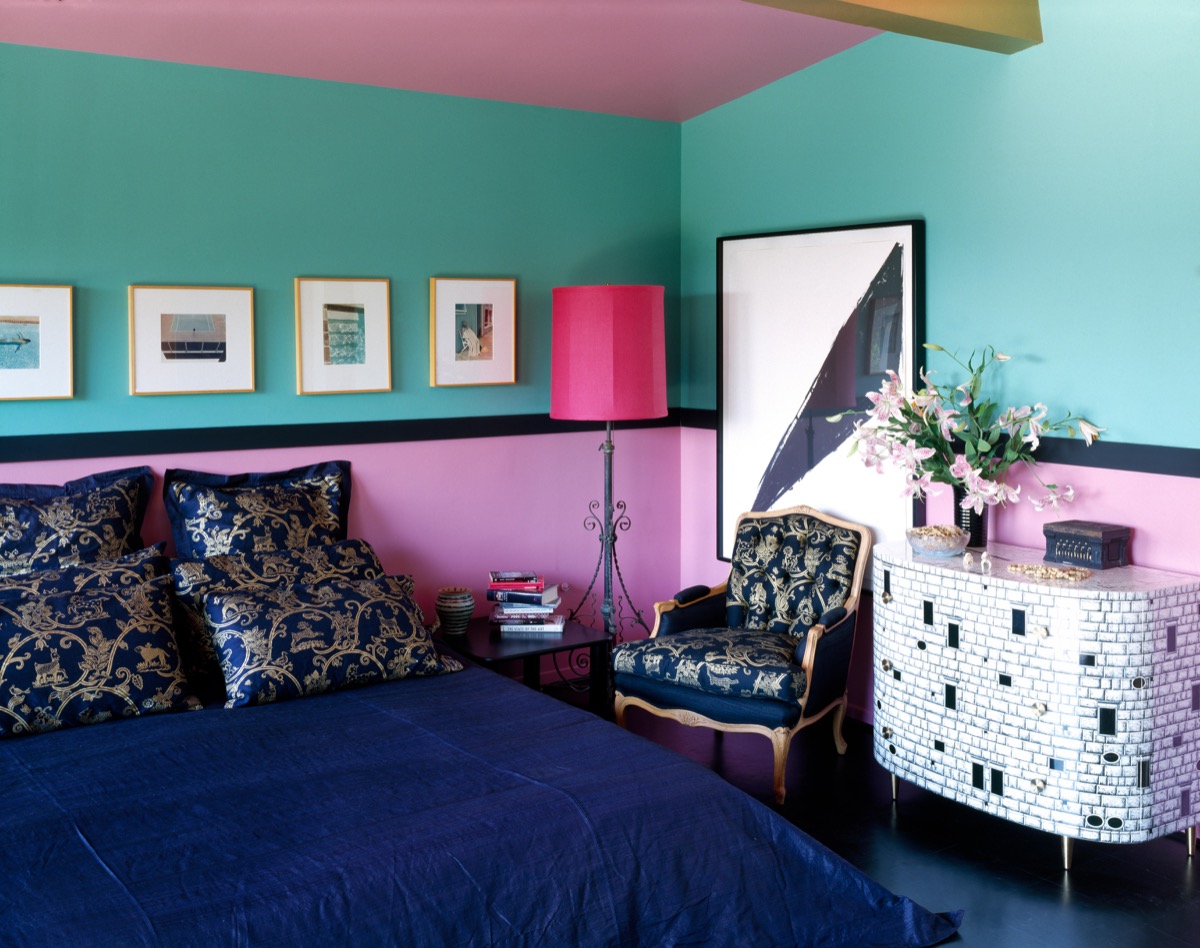 "Just as America went avocado green in the '70s, it turned mauve in the '80s," note Leatrice Eiseman and Keith Recker in Pantone: The Twentieth Century in Color.

This mauve movement can be largely attributed to artist Georgia O'Keeffe's death in 1986. Following her passing, much of her work became widely popular and brought "the mauve-inflected tones of desert earth, adobe, and high Sierra sunsets" into the spotlight, Eiseman and Recker note. 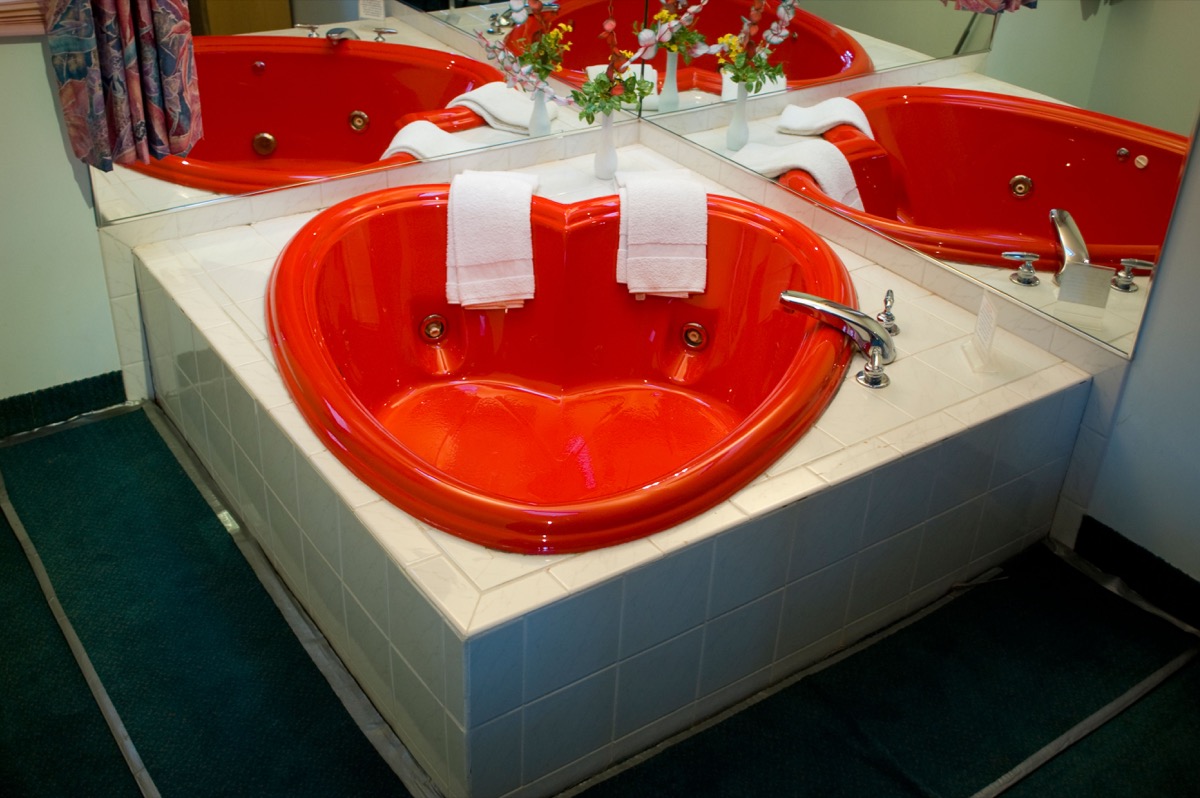 Love wasn't just in the air in the 1980s—it was built right into our homes. While the heart-shaped hot tub was invented in 1968 by Morris Wilkins, owner of the Cove Haven Resort in Lakeville, Pennsylvania, its popularity continued to soar in the 1980s, becoming a fixture in hotels and homes alike.

Chintz—i.e., multicolored floral patterns—was everywhere from beds to lampshades to drapes to walls in the 1980s. Here it is featured in 1984's Sixteen Candles, starring Molly Ringwald.

The popularity of the trend is attributed to celebrity interior decorator Mario Buatta, whose use of the fabric earned him the nickname "The Prince of Chintz." However, even Buatta knew his fascination with English-inspired décor was a bit out of step with his Staten Island upbringing. "I know a lot of this is affectation," he told the New York Times. "I know I'm not an English country gentleman. I'm basically a tradesman who goes in the front door instead of the back."

Taking a page from the French monarchy, stylish '80s homes had curtains so heavy they could crush a person, just like these pink ones in the 1984 movie Bachelor Party.

A two-panel set was hardly sufficient to cover windows in an '80s homes—truly stylish spaces also had matching valances and ornate tiebacks, too. 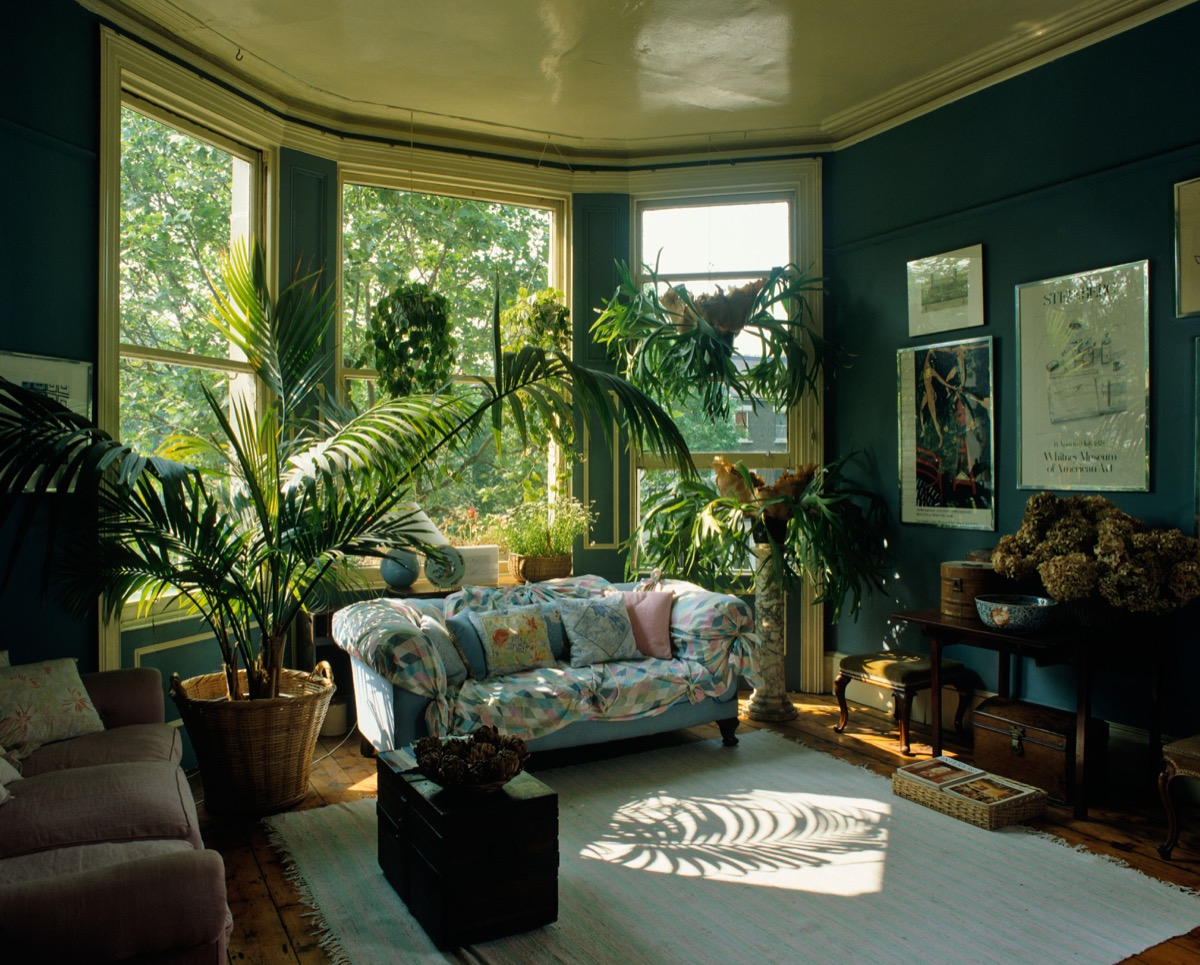 Even if you didn't have a particularly green thumb, odds are you still had quite the garden in the 1980s—albeit an entirely indoor one. Ferns, ficuses, and hanging spider plants were as ubiquitous in living rooms during this decade as flat screens today.

If you wanted to really highlight your walls in the '80s, two-dimensional art just wouldn't cut it. Instead, '80s homes had walls decked out in elaborate metal sculptures, like birds flying over marshes and bouquets of flowers.

If you grew up in the 1980s, odds are you had wall-to-wall carpeting in at least one room in your house. And if you or your parents were strict adherents to the era's interior design trends, the carpeting you had was teal, too—just like the Griswolds' in 1989's National Lampoon's Christmas Vacation.

Though lace curtains aren't the most practical, they blended in well with the girly frills and florals of the '80s. They were the perfect addition to Andie's room in the 1986 teen classic Pretty in Pink, pictured here.

The delicate fabric first entered the U.S. textile scene in the early 1900s, back when European culture had a strong influence on everything American.

While modern kitchens today may be home to granite counters and stainless steel appliances, back in the 1980s, it was all about lacquer cabinetry and countertops. The shinier, the better—just like the kitchen in the 1986 movie Cobra, starring Sylvester Stallone.

In the '80s, tropical prints were just as ubiquitous on walls, curtains, and bedsheets as they were on people's garments. On Golden Girls, Blanche Devereaux (Rue McClanahan)—pictured here—was clearly a fan.

From pinks and purples to soft blues and sea foam greens, pastels were all the rage amongst homeowners and interior designers in the '80s. For the pastel enthusiast, it wasn't unheard of to paint the entire house a subtle shade of light purple; for someone who just wanted to dabble in color, a simple throw pillow in light azure would suffice. But in 1989's Troop Beverly Hills, Phyllis Nefler (Shelley DuVall) clearly went for the former.

Brass was the metal of choice in '80s homes, with everything from bathroom fixtures to kitchen cabinets adorned in the goldish metal, as you can see here from The Cosby Show.

However, not only do brass fixtures date a home, the ones used in the '80s rarely made it to the end of the decade intact. "The brass was rarely solid brass. It was plated, and it betrayed itself in four years or so," interior designer John Saladino told the New York Times.

Long before there were iPhones, there were novelty phones, a staple in virtually every '80s teen's bedroom, like DJ Tanner's (Candace Cameron Bure) lip version here on Full House.

What was the point of calling your friends if you couldn't hand the receiver back to Snoopy or Mickey when you were done?

While the TVs were definitely smaller, the entertainment centers of the '80s were so large they could practically qualify as aircraft carriers. And if you miss the 1980s, check out these 30 Facts That Will Overwhelm You With 1980s Nostalgia.