Don't let the wrong cut add years to your look.

The right haircut can make all the difference when it comes to your look, especially as you get older. Unfortunately, for every great haircut out there that emphasizes your bone structure, hides fine lines, and gets people stopping you to ask where you got it done, there are a dozen unflattering cuts that are actually adding years to your look.

In fact, if you're trying to look younger—or at least want to avoid looking significantly older than your actual age—there are a number of popular women's haircuts you should avoid at all costs. From outdated trends to sneaky styles that draw attention to the signs of aging, make sure you know what not to ask for before you make the big chop. 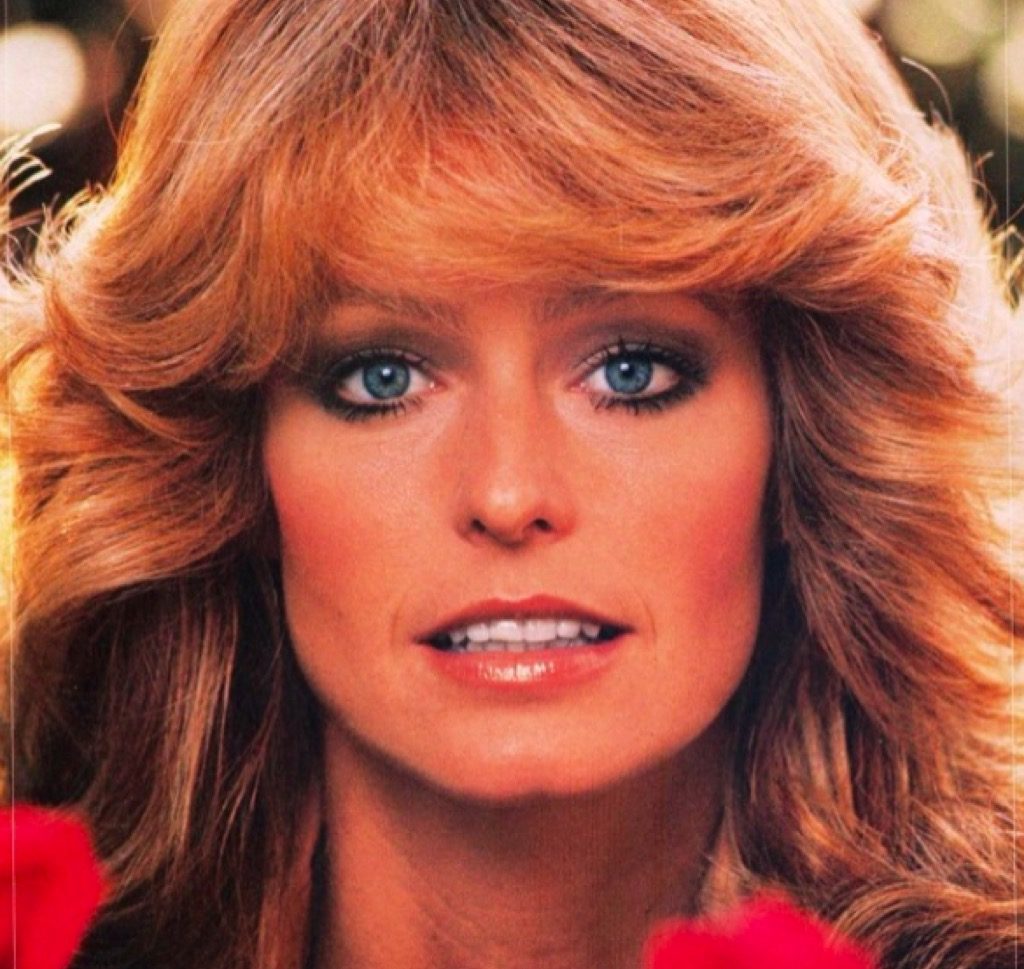 Farrah Fawcett's signature feathered hairstyle was a go-to for countless women coming of age in the '70s and '80s—and unfortunately, many women who got used to this look when it was still popular haven't quite been able to let it go. Unfortunately, this cut is a particularly egregious offender when it comes to making people look older. "A dated hairstyle can age a woman—like feathered bangs from the '80s," says master stylist and national Living Proof educator Shreeda Tailor. 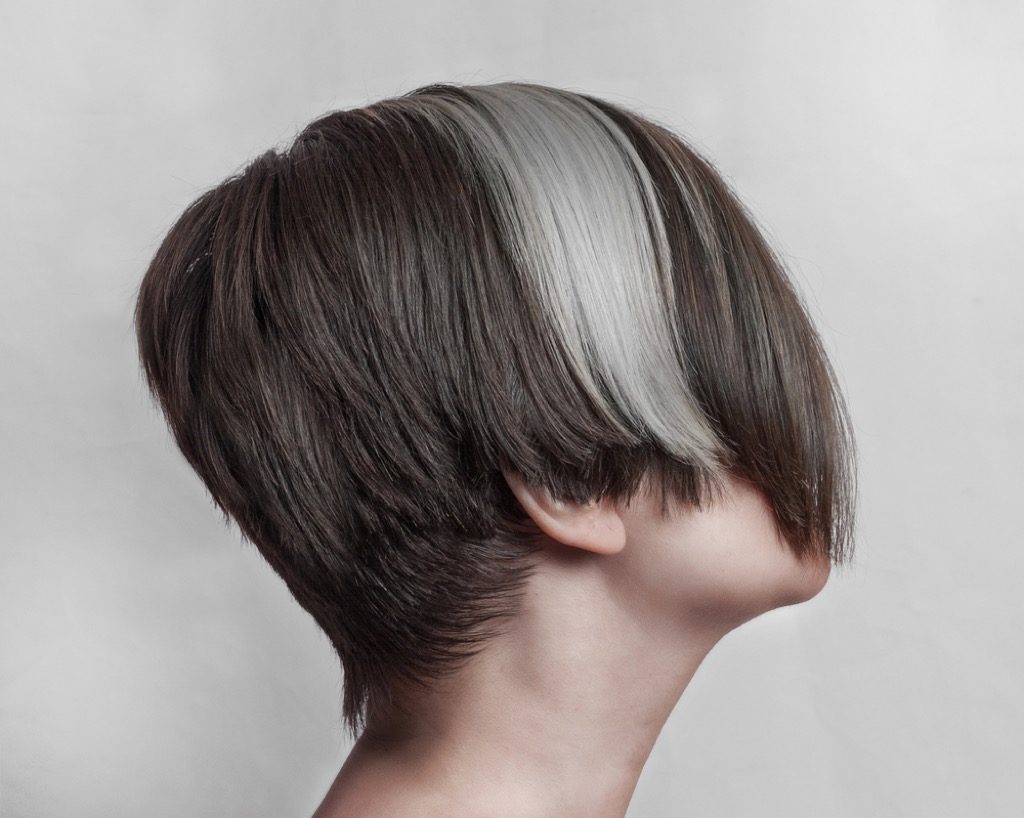 While the traditional Chelsea cut is shaved in the back with longer pieces and bangs in the front, this slightly-less-drastic modification has become increasingly popular in recent years—for better or for worse. Unfortunately, the cut can make you look older, as it draws attention to the neck, which tends to show early signs of aging, while the longer parts in the front of this cut tend to hit areas that show your age, like the forehead, eyes, and lower jaw. Though a closely-shorn cut may seem like a low-maintenance alternative to longer pixies, this style can dramatically emphasize the signs of aging. With virtually no hair to distract from fine lines, skin discoloration, or wrinkles, this cut can instantly age you.

However, that doesn't mean you should necessarily avoid all short cuts just to avoid looking older. "If [a woman] doesn't have the time or have the skill to do her own hair, she should think about going a little shorter so she can do a minimal amount of work with it," says stylist Marc Zelno of Delilah Salon in Brooklyn. While many people associate long hair with youth, keeping your hair long and stick straight can actually make you look older than you are. Pin-straight hair puts your face front and center—including all those little lines you're trying to obscure. Straight hair also looks less voluminous than hair with a bit of body, mimicking the natural loss of volume that tends to accompany the aging process.

Luckily, that doesn't mean that long hair has to be out of the question just because you're getting older. "Women can start wearing hairpieces," says Zelno. "It's not just for young women to wear wigs or extensions—they even have clip ons." Though a little volume can go a long way when it comes to making you look younger, opting for a short, spiky cut won't do you any favors—in fact, it can make you look far older than you actually are. "If you have an older woman who's lost some volume, the layering should be kept to a minimum, particularly if they have fine hair," says Zelno. While eye-length bangs can adorably frame your face when you're younger, if you're trying to shave a few years off your appearance, this look isn't for you. "If a woman has very pronounced lines or texture around her eyes, then bangs that draw attention to the eyes would be contraindicated," says Tailor.

Sure, it may be the go-to look of Vogue head honcho Anna Wintour, but the blunt bob-and-bangs combo is doing no favors for most women—especially those trying to look younger. As is the case with many blunt cuts, this harsh style puts emphasis on the eyes and jaw—two parts of the face most affected by age—and its sharp lines rarely create a youthful look.

While this look may have been the height of fashion half a century ago, if you're still getting your hair cut to make this style work, you're only aging yourself. Teasing and spraying—two requirements for anyone eager to master this look—are practices as antiquated as the bouffant itself. 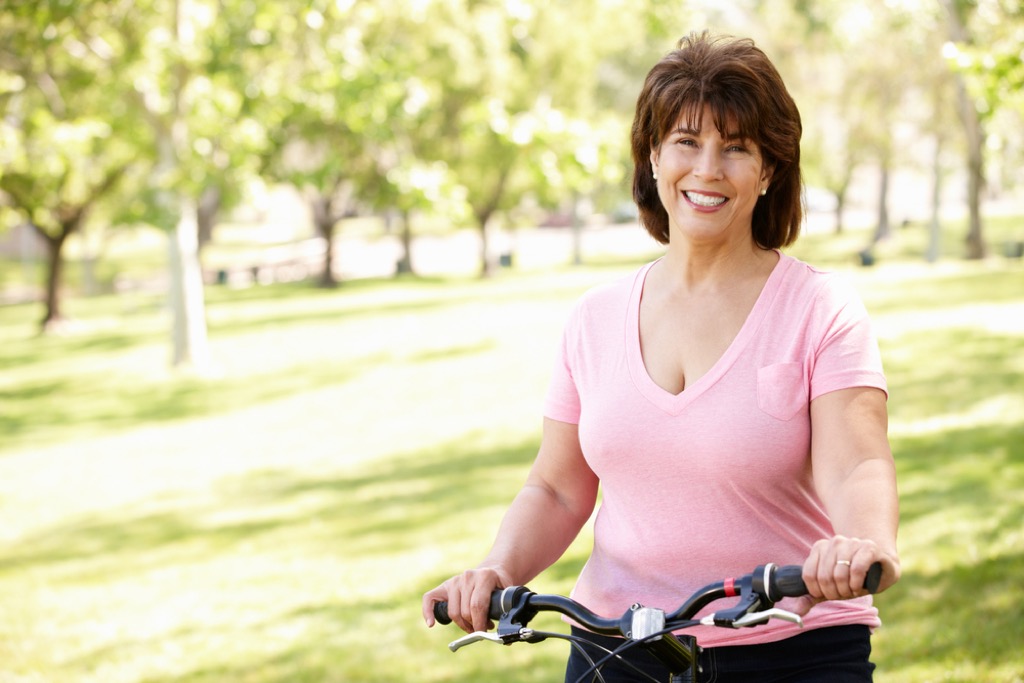 If you're thinking of getting bangs to obscure some of those lines on your forehead, go for it—just make sure they're not wispy ones. Not only will these thin bangs draw more attention to your hair's overall thinness, they're not particularly forgiving when it comes to hiding those fine lines bangs typically cover. 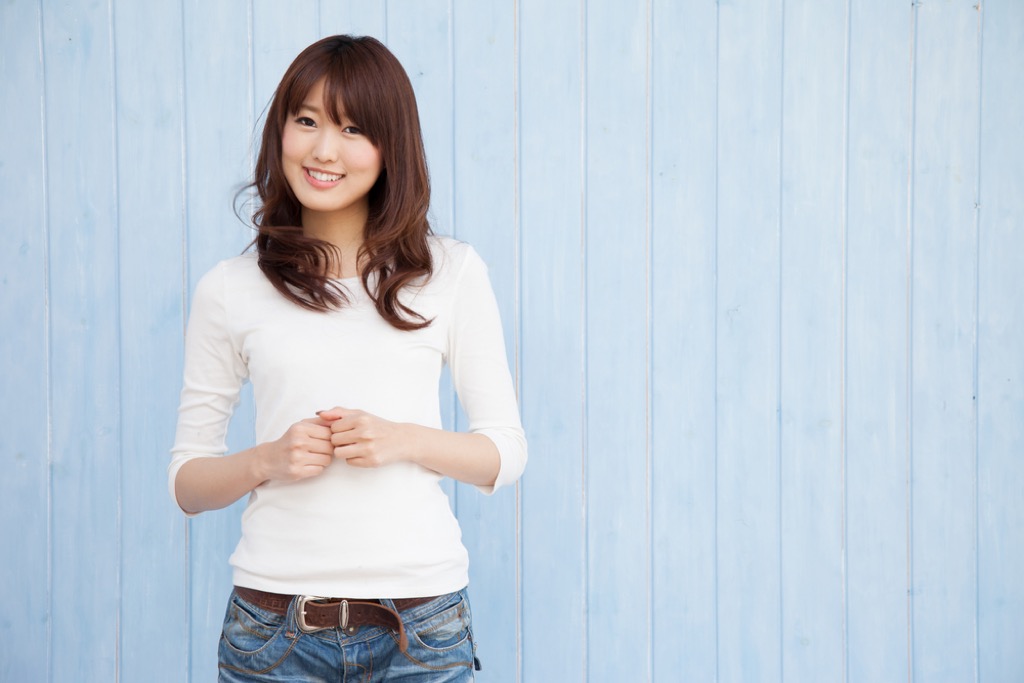 While many people associate having long hair with a more youthful look, as your hair begins to lose volume with age, those long layers can actually look dull and lifeless. "One misconception people have is that if they layer their hair, they're going to get more body out of it," says Zelno. "If someone has medium to thin hair, that's not the case—it's only the case with people with thicker, coarser hair."

Those closely-cropped curls probably aren't doing much to flatter your face—in fact, they could be making you look older. Not only is this style difficult to maintain—a single night of sleeping on it while it's damp can completely ruin the look—it's unforgiving for those with volume loss and, since your curls don't actually touch your face, they do little to highlight your bone structure or hide those fine lines or complexion woes. 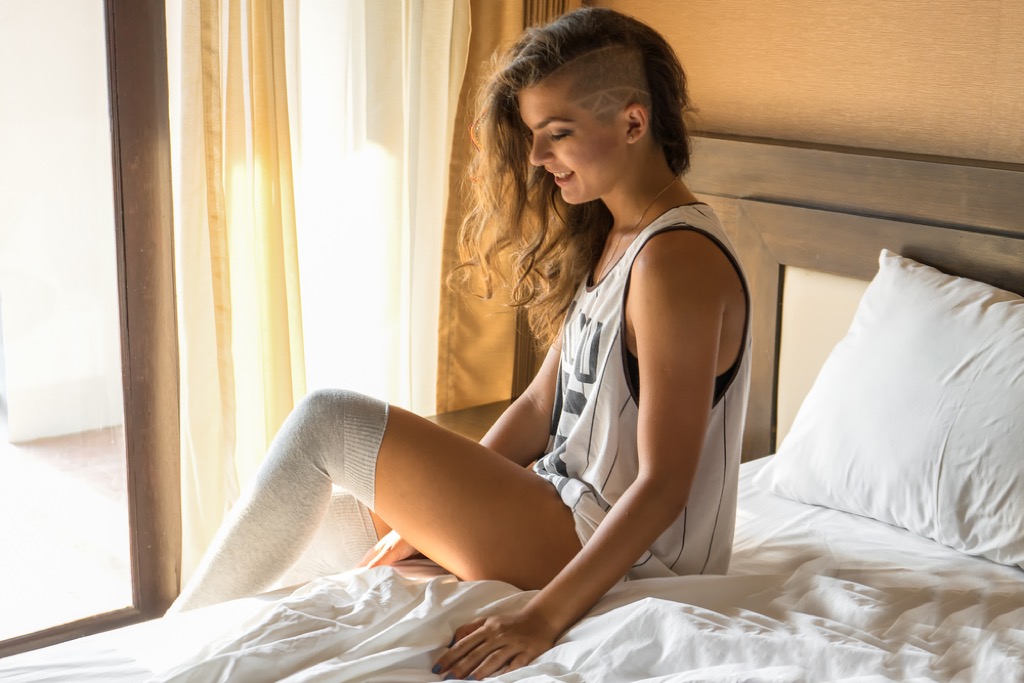 The undershave may have been the go-to cut for hipsters five years ago, but this look isn't going to do much for you except make you look older. "If it's not a current trend, a look from the past can make a woman appear outdated and thus older," says Tailor.

Tiny bangs may be a go-to for many 20-somethings, but if you're nearing middle age and still wearing them, you might be making yourself look older. The harsh horizontal lines created by baby bangs only emphasize those lines starting to appear on your forehead, and in many cases, trendy looks, like baby bangs, can make you look like you're trying too hard, making you look older in the process.

14
Flipping your hair in front 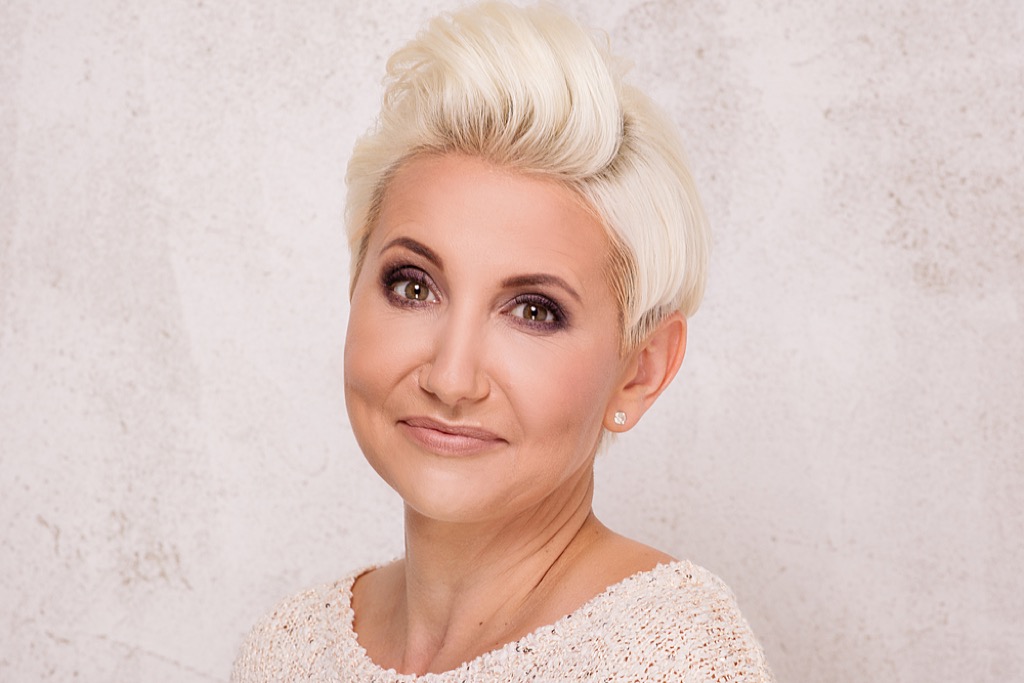 The front flip—a kind of mini-bouffant popularized in the early 2000s—can instantly add years to your look. Not only is this trend outdated, this style can draw attention to your forehead and eye area, bringing those crow's feet and fine lines front and center.

"The biggest misconception older women have is that their hair has to be lighter," says Zelno, who says that light blonde with a gray cast tends to appear gray rather than blonde. "Over-highlighting their hair when they get older tends to make them look older instead of younger." 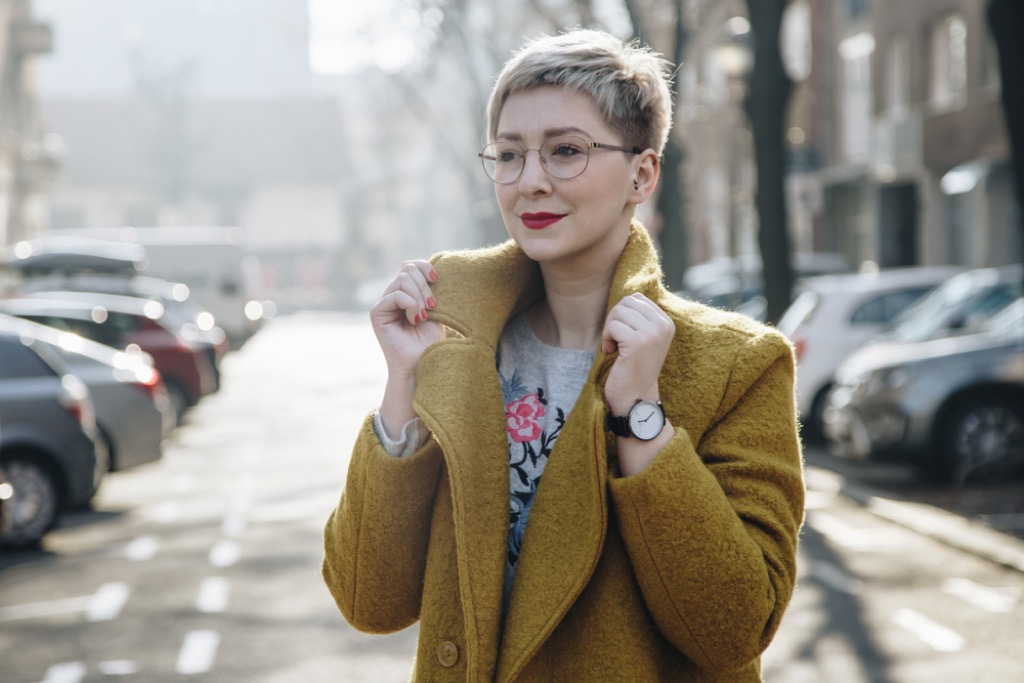 While pixie cuts can look adorable, if they're cut too short, they can make you look far older than you actually are. Not only do they draw attention to every line and wrinkle on your face, ultra-short hairstyles tend to be preferred by women of a certain age, making even young women look significantly older than they actually are when they get one. 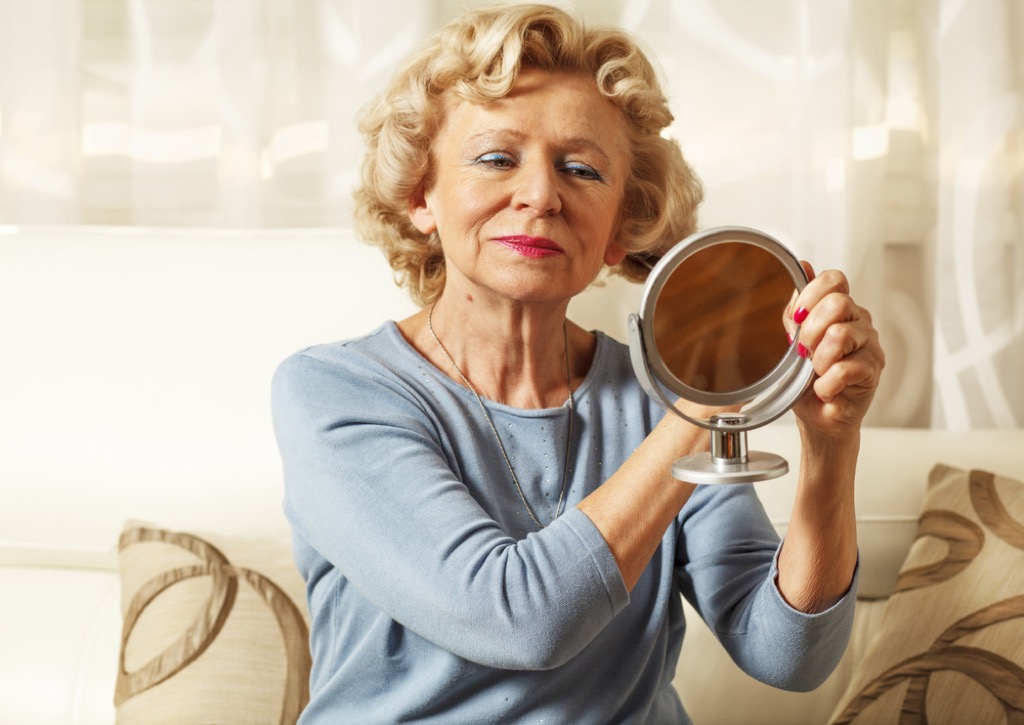 Adding some vintage appeal to your hair, whether you're busting out the victory rolls or the finger waves for a special occasion, can be cute, but going for those short, tight pin-up curls on an everyday basis can make you look like you're stuck in the past. "If you like a retro look, consult with your stylist to see how your favorite retro style can be given a modern twist," recommends Tailor.

Sarah Crow
Sarah Crow is a senior editor at Eat This, Not That!, where she focuses on celebrity news and health coverage. Read more
Filed Under
Grooming
Read This Next
Latest News
Read This Next