A lot of stars were born this year.

If we learned anything in 2018 it's to always expect the unexpected. This year, a megaladon found box office success amid negative critiques and a megabrand found a groundbreaking way to connect with consumers. On top of that, there was a 10-year-old yodeler who went from Walmart to Coachella, and the "cash me ousside" girl became a rap success, proving you can go viral twice.

Below, we've gathered the most noteworthy unexpected hits of 2018. We don't know what 2019 will bring us, but if it's anything like this motley crew, we can't wait to find out. 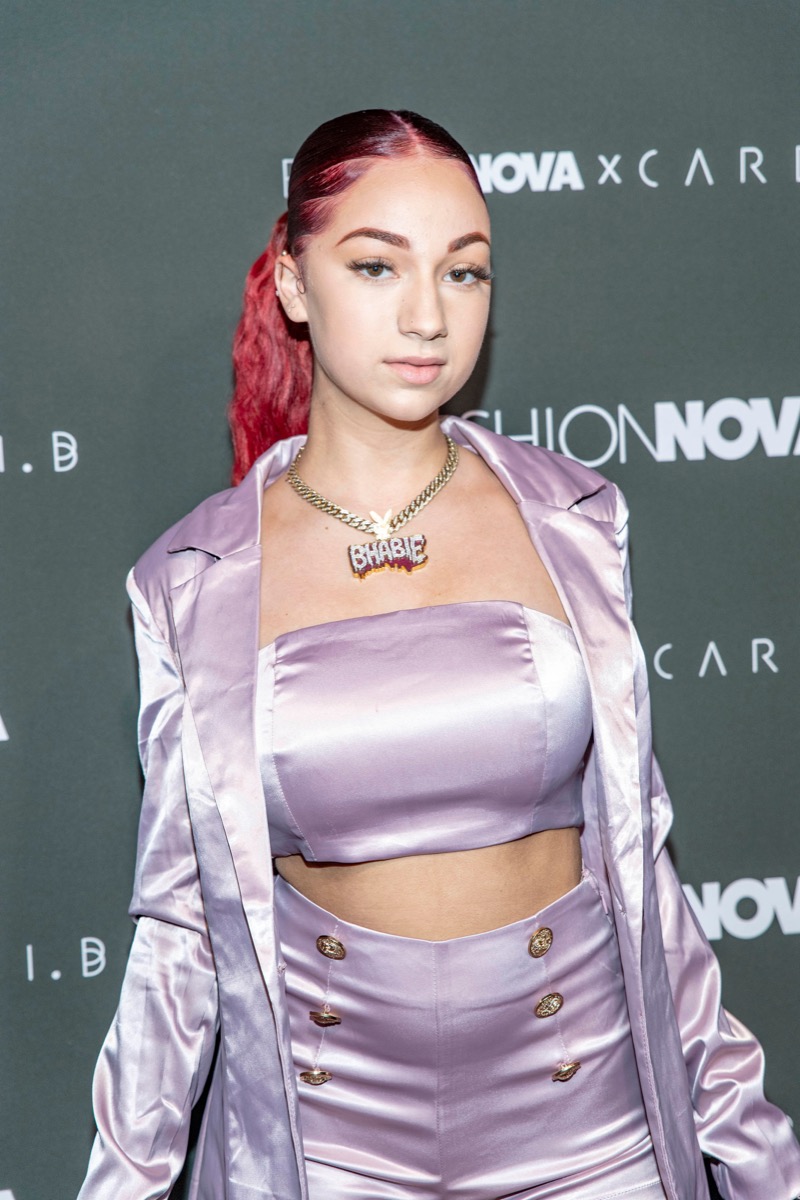 In 2016, the phrase of the year was probably, "Cash me ousside. How bow dah." The bewildering statement came courtesy of then-13-year-old Danielle Bregoli, a troublemaking teen from The Dr. Phil Show. In Bregoli's episode—titled "I Want To Give Up My Car-Stealing, Knife-Wielding, Twerking 13-Year-Old Daughter Who Tried To Frame Me For A Crime"—the audience couldn't help but laugh at her antics, leading Bregoli to respond with the now legendary catchphrase.

Two years later, she took the world by storm again, this time for her rapping. Bregoli became the youngest female rapper ever to appear on the Billboard Hot 100 chart with her debut single "These Heaux" and then had a massive hit that went gold called "Hi B*ch." She was signed by Atlantic Records, teamed up with big rappers like Ty Dolla $ign and Lil Yachty, and now has beef with hip hop queen Iggy Azalea, which is the sign of a true artist. How bow dah, Dr. Phil?

2
The 10-Year-Old Walmart Shopper Who Made Yodeling Cool 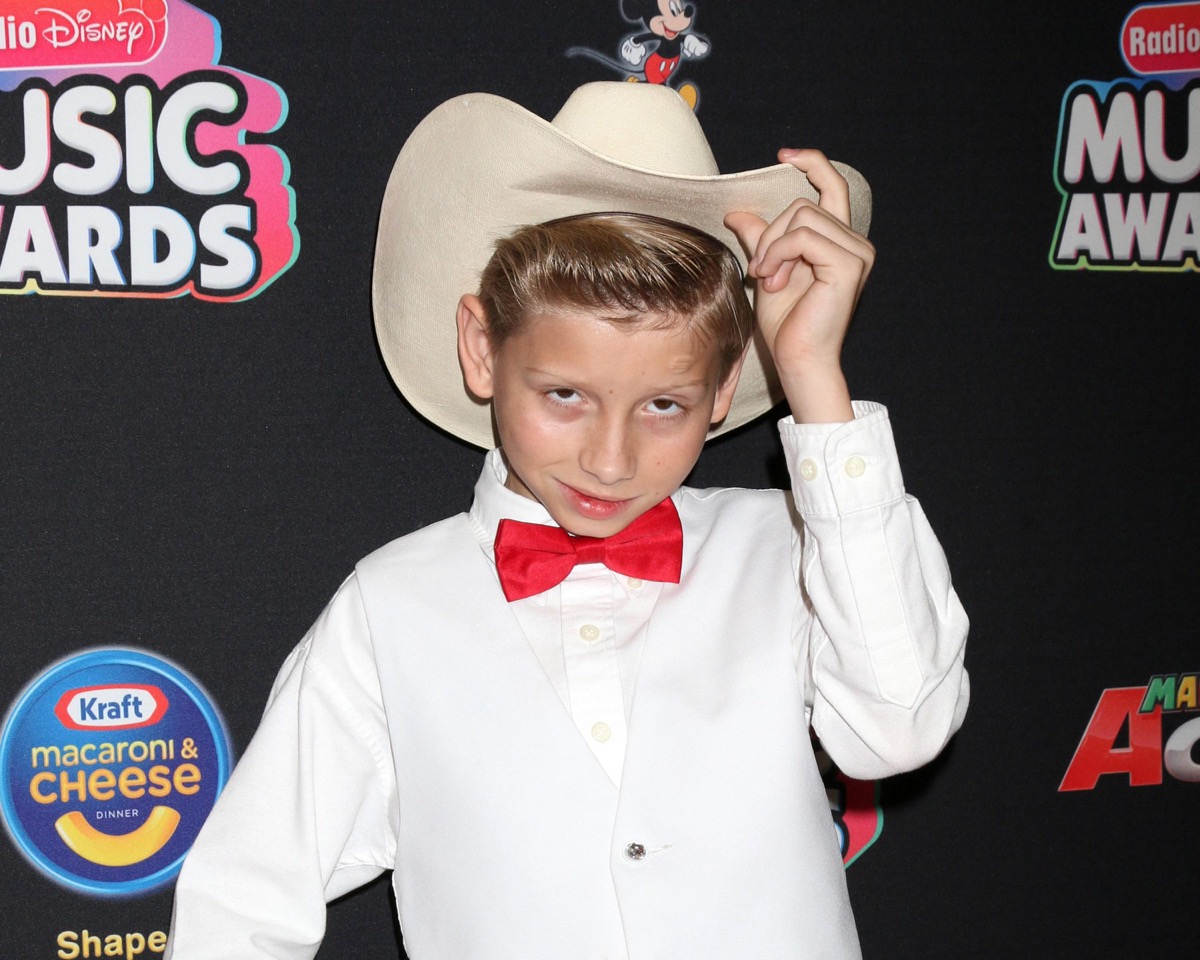 Since busting out a stellar yodel in an Illinois Walmart, 10-year-old Mason Ramsey has become an internet sensation, garnering millions of followers. Months later, the yodeling prodigy has released his own music and even performed at Coachella. Apparently, this year we learned yodeling can be cool.

While the Oscars struggled with its own lack of diversity, the historically traditional Walmart released a commercial during the 2018 awards ceremony that shattered stereotypes.

The one-minute ad—directed by a powerhouse team consisting of Dee Rees, Nancy Meyers, and Melissa McCarthy—quickly became one of the most talked about moments of the Oscars. It features young African American girls fighting a monster while an evil commander, played by Mary J. Blige, gives orders.

Half-way in, the audience realizes that the girls are merely playing in a Walmart box, and the monster is only one of their mothers, warning them that bedtime is imminent. In addition to the African American cast, what makes the ad so groundbreaking is that a lesbian couple serves as the matriarchs of the family and that the commercial was sci-fi in nature. It was a big moment, considering how rarely African Americans are featured in the genre.

Nearly a year after deleting his account in May 2017, Kanye West returned to Twitter  in April of this year, launching into a viral tweetstorm that took over the internet. From talking about the consciousness of the human race to praising Donald Trump and his presidency, West certainly did not come back quietly. His unexpected return to the platform gave the rapper the stage to wreak havoc on an even larger front—and people couldn't get enough of it in 2018.

5
The Meg Became a Hit Despite The Hate

This sci-fi horror film received a plethora of negative reviews, but it managed to make more than $527 million worldwide—a feat that earned The Meg the 18th spot on the list of the highest grossing movies in 2018. Considering all the bad press and without a huge star, The Meg did well for itself. A Forbes critic said he hadn't seen such an unexpected box office win in four years.

6
Nailed It! Turned Baking Fails Into a Huge Win

Since the success of shows like The Great British Baking Show and Chef's Table, audiences have been eager to craft their own sugary concoctions at home. But we all know too well that the results aren't always on point. Which is exactly where the Netflix series Nailed It! comes in. The show, which celebrates amateur baking failures, had three seasons in 2018. It was easily TV's surprise success of the year.

7
Queer Eye Was the Reboot We Didn't Know We Needed

The Fab Five returned this year and they were better than anyone could have ever imagined. The original Queer Eye for the Straight Guy premiered on Bravo in 2003 and helped the general public gain a deeper understanding of queer culture in a relatable and heartwarming way.

When it was announced that Netflix would bring back the series after over a decade, fans weren't sure what to expect. Many even doubted that the new iteration could do any better than its predecessor. But when Queer Eye first debuted in February, it far surpassed expectations. It was a huge hit for Netflix, which quickly brought the show back for a second season in June. Cue theme song: "All things just keep keep getting better." For more emotional TV moments from Queer Eye and others, check out 20 Times TV Made Us Weep in 2018.

8
Celebrities Streamed Fortnite, Proving They're Nerds Just Like Us 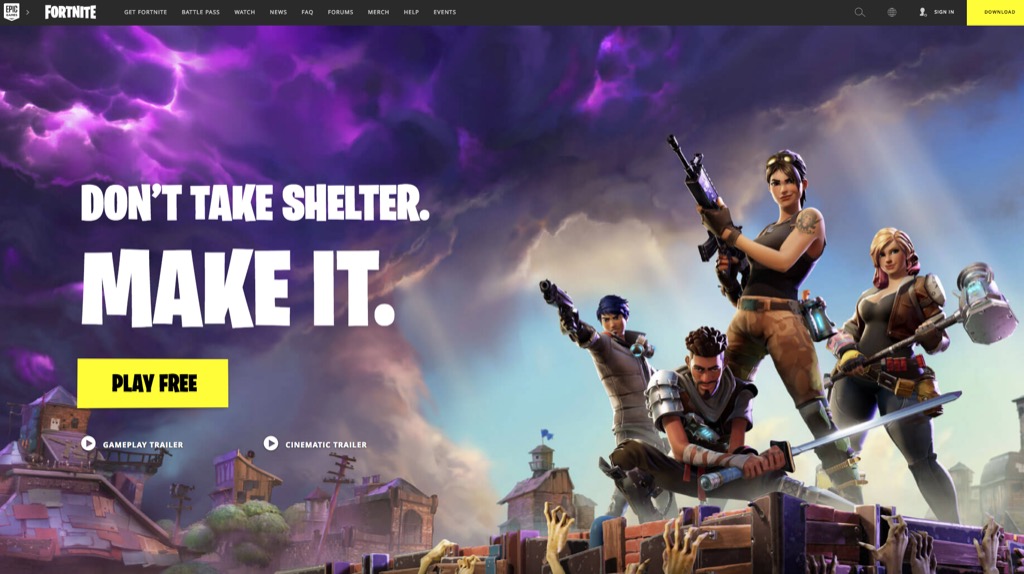 One of the more surprising realizations to come out of 2018 was the fact that celebrities can be video game nerds, too. From Drake to Joel McHale, the star-studded ProAm tournament featured quite a few familiar faces playing the latest version of the game, Fortnite: Battle Royale. As Pittsburgh Steelers' wide receiver Juju Smith-Schuster tweeted, "In the same week I met and recruited LeBron [James] to the Steelers and played Fortnite with Drake, Ninja, and Travis Scott. What a time to be alive." Indeed, Juju. Indeed.

9
IHOP Tricked Us and It Was Impressive

If you've ever been to IHOP, you know the chain serves more than just pancakes. But in 2018, they found a way to make sure of it: with a new title that literally flipped the P into a b, in honor of a new burger line. IHOP's rebranding definitely gained attention and it didn't take long for them to admit that was the point: They never actually planned to officially change their name, they merely wanted you to know they're more than their pancakes. You got us, IHOP.

While the love story portrayed by Lady GaGa and Bradley Cooper in A Star is Born captivated audiences around the world, the real star actually turned out to Charlie, Bradley Cooper's fluffy dog who appears in the movie. Fans everywhere went on a social media rampage to elect Charlie as Best Supporting Actor in the film. Time will tell if it works out, but our paws are certainly crossed!

11
The Chilling Adventures of Sabrina Proved Us Wrong

Netflix's The Chilling Adventures of Sabrina garnered a ton of praise after its debut in October, despite many cringing at the thought of the formerly funny and lighthearted character taking a different detour from the original with Melissa Joan Hart. For a series that took the comedy out of a beloved character and her witchy plights, audiences still seem entranced (or perhaps, bewitched) by Netflix's latest venture and its star, Mad Men alum Kiernan Shipka.

When he's not a goat doula on his farm in rural Vermont, actor Ezra Miller is busy crafting looks to challenge audiences everywhere—including a GQ spread, which went viral thanks to the actor's hot pink gloves, fur coat, lipstick, and crop top. Plus, the Fantastic Beasts star showed off his gender-bending style at nearly every event he attended this year. Here's hoping that the actor continues with his fashionable streak into 2019.

Throughout the past few years, podcasts like Dirty John (which is now a television show on Bravo) and Homecoming (which recently premiered on Amazon Prime) have transcended the audio world onto television. On top of that, they've brought in big stars like Connie Britton and Julia Roberts. Historically, it's been books that have been adapted for the screen, but these hits proved podcasts deserve the spotlight too. Stay tuned for more because FX is currently adapting a TV show of Welcome to Night Vale, and of course, Serial's story will continue on HBO.

14
The Art Of Scamming Was Mastered by Anna Delvey

The story of New York City socialite and expert scammer Anna Delvey, first featured on The Cut, went viral in a matter of minutes. The Russian-born twentysomething's wrongdoings—she owed obscene amounts of money to New York's hottest hotels and restaurants—seemed to come straight out of a movie. And soon, they might be: Shonda Rhimes is developing a Netflix series based on Delvey, who was arrested on six counts of grand larceny and is currently being held without bond in New York's Rikers Island prison.ae0fcc31ae342fd3a1346ebb1f342fcb

In January, CVS Beauty launched a new campaign called "Beauty in Real Life," which included the addition of a "Beauty Unaltered" watermark that signaled to customers whether or not an image had been photoshopped. Not only that, but the company announced that they aim to stop photoshopping their ads altogether, vowing to become a part of the recent movement to feature men and women of all races and sizes, sans editing. Much like Walmart's inclusive commercial, we didn't see it coming, but we welcomed it! 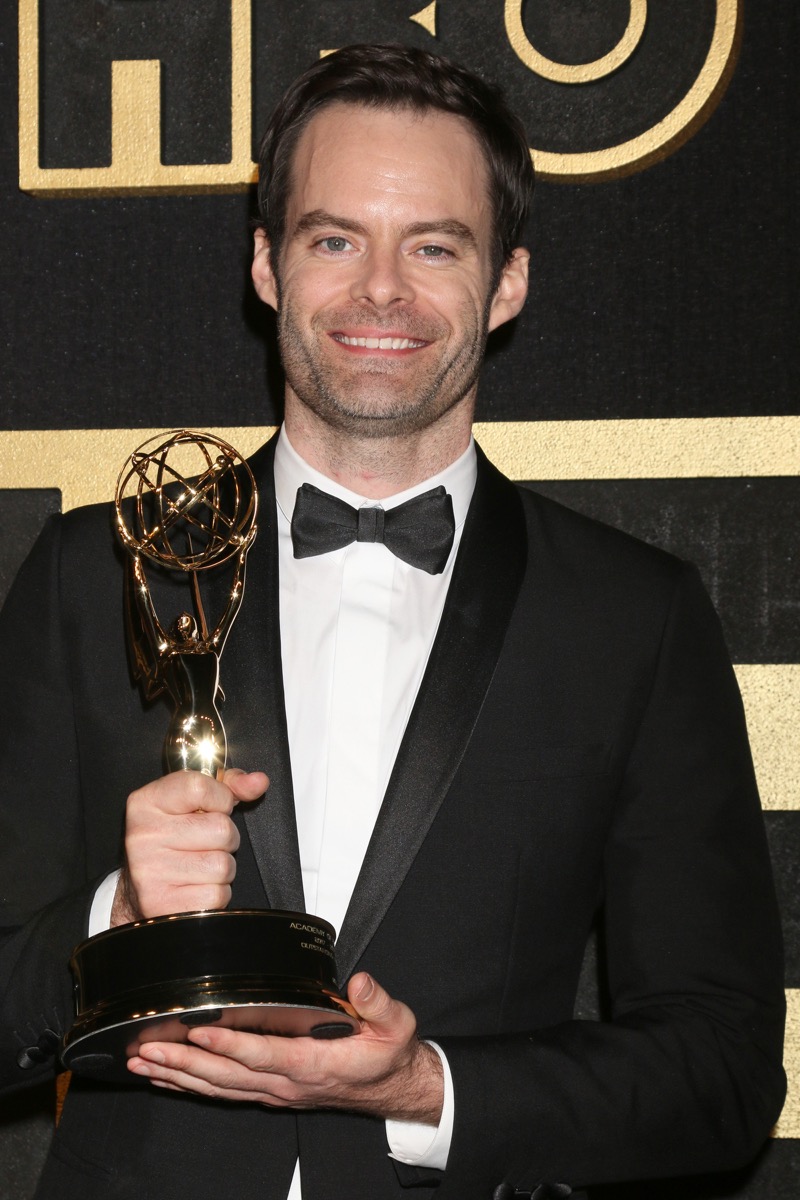 Many people didn't even know Bill Hader had a new series when Barry, the SNL alum's dark HBO comedy, earned him an Emmy for Outstanding Lead Actor in a Comedy Series earlier this year. Even one of Barry's writers told The Hollywood Reporter that he knows the concept—a hitman (Hader) tries to get into acting—"doesn't sound very good." But now, people are giving it a chance.

Superhero movies nearly all feature the same fight sequences and special effects, making it next to impossible to distinguish one from the other. However, when Black Panther hit theaters in February 2018, audiences saw something different. Finally, the longstanding Hollywood myth that audiences won't turn out to see a movie with people of color was disproved. Since its opening, in fact, Black Panther has become the highest grossing blockbuster in 2018, amassing over one billion dollars worldwide. And for more of what we loved to watch in 2018, check out The 15 Most-Watched TV Programs of 2018.

Ashley Moor
Ashley hails from Dayton, Ohio, and has more than six years of experience in print and digital media. Read more
Filed Under
Movies • TV
Read This Next
Latest News
Read This Next