Southwest Is Lifting This Major Restriction on Flights, Starting Feb. 16

It's been a tough time for major airline carriers and their passengers alike. Mass flight cancellations, due in part to a staffing shortage triggered by the pandemic, have been costly for carriers. Not to mention, miserable for travelers, as airports across the country have descended into customer service chaos. Beyond that, incidences of in-flight harassment and violence have soared sky high, which in turn led to policy changes aimed at controlling the issue. Now, those policy changes are shifting again. Amid dynamic industry conditions, read on to find out what Southwest Airlines is changing in the coming days.

RELATED: Never Do This When Your Flight Is Delayed, Experts Warn.

Southwest is bringing back alcohol service on its flights for the first time in two years.

Southwest announced the plan to resume alcohol sales on its flights this month after a break that neared two years, according to a corporate statement. Sales of alcoholic beverages are set to resume on Feb. 16.

The Texas-based airline had paused alcohol service in March 2020 just as the pandemic was taking hold in the U.S., and had extended the alcohol hiatus last year due amid the spike of in-flight disruptions among unruly passengers.

RELATED: Never Do This When Eating on a Plane, Flight Attendants Warn.

Southwest will add new nonalcoholic beverages to its in-flight service menu, too. 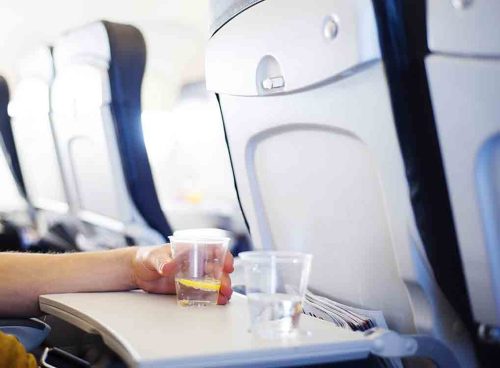 Southwest's alcoholic beverage menu is set to include beer, wine, vodka, tequila, rum, and bourbon on most of its flights that span at least 176 miles.

Given the long pause in service, Southwest will allow passengers to redeem any Southwest drink coupons that were set to expire in 2020 or 2021 for an alcohol beverage through Dec. 31, 2022.

Customers may be enthusiastic about alcohol sales, but flight crews are not.

Passengers are likely to greet the change with enthusiasm. "Customers have expressed a desire for more beverage options, so we're delighted to restore additional on-board offerings as a part of the Southwest hospitality that our customers know and love," said Tony Roach, Southwest's vice president of customer experience and customer relations, said in the statement.

But flight crews are far from as thrilled. The union that represents Southwest Airlines' flight attendants called the shift "both unsafe and irresponsible," according to Reuters. "TWU Local 556 is outraged at Southwest Airlines' resumption of alcohol sales," Lyn Montgomery, president of TWU Local 556, told Reuters. "We have adamantly and unequivocally informed management that resuming sales of alcohol while the mask mandate is in place has the great potential to increase customer non-compliance and misconduct issues."

RELATED: For more up-to-date travel news, sign up for our daily newsletter.ae0fcc31ae342fd3a1346ebb1f342fcb

Whether alcohol sales are a factor or not, the Federal Aviation Administration (FAA) pledged a "zero tolerance" approach to disruptive passengers amid so much violence in the skies. In 2021, the agency initiated hundreds of enforcement cases and referred dozens to the FBI for review, according to CNBC.

"Let this serve both as a warning and a deterrent: If you disrupt a flight, you risk not just fines from the FAA but federal criminal prosecution as well," FAA Administrator Steve Dickson told the outlet.

RELATED: If You Hear This on Your Plane, It Might Be an Emergency, Flight Attendant Warns.