Here's Why Your Phone Is Making You a Terrible Parent

Ignoring your kids creates a vicious cycle that is worse than you think.

Internet addiction is on the rise in America, and the affliction is particularly hurting young adults, many of whom report feeling increasingly isolated and depressed. But parents aren't immune to the diseases of the digital age either. One recent study found that 36 percent of adults between the ages of 30 and 49 admit to being online "almost constantly." For those that are parents, the effect that this is having on their children is much more severe than you'd think.

A new study in the journal Pediatric Research has found that parents who spend a lot of time on their phones during family activities such as meals, playtime, and bedtime, are hurting their longterm relationship with their children and causing them to behave badly. Read on to learn more about the study—and why you should take a second look at your phone habits. And if you're feeling overly dependent on your device these, it may be helpful to know these 20 Genius Ways to Kill Time without a Smartphone. 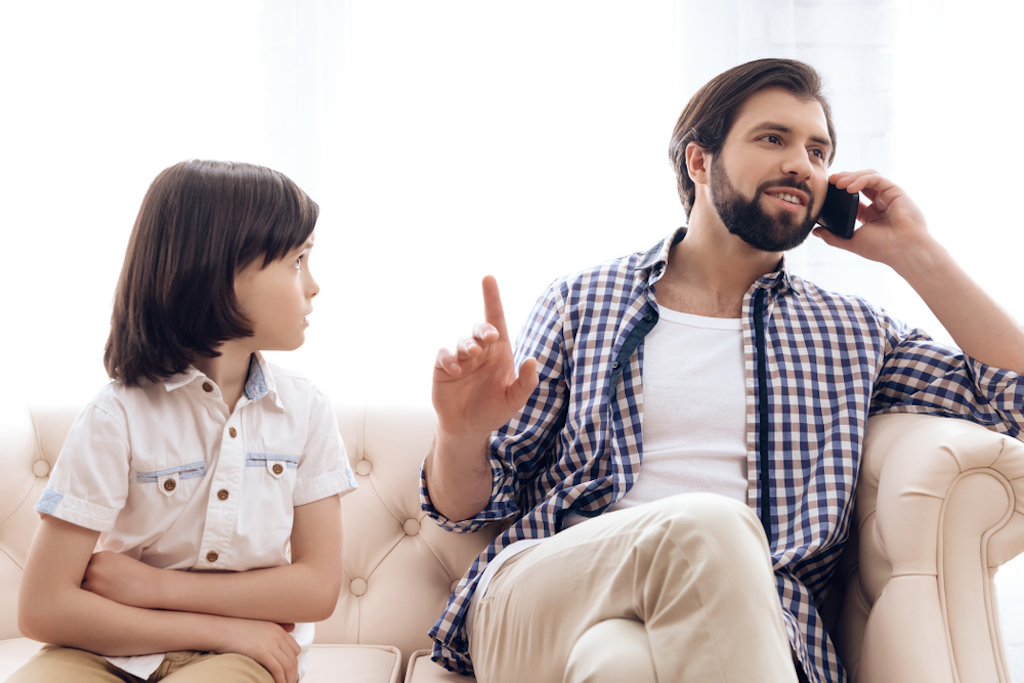 Between 2014 and 2016, researchers Brandon T. McDaniel of Illinois State University and Jenny S. Radesky of the University of Michigan Medical School gave 172 two-parent families with a child age 5 years or younger an online questionnaire that asked parents to indicate how often they checked their phones while with their children and how often their kids acted out. The parents also reported on their own levels of stress and depression, how much co-parenting support they felt they received from their partners, and how much their kids used technology. 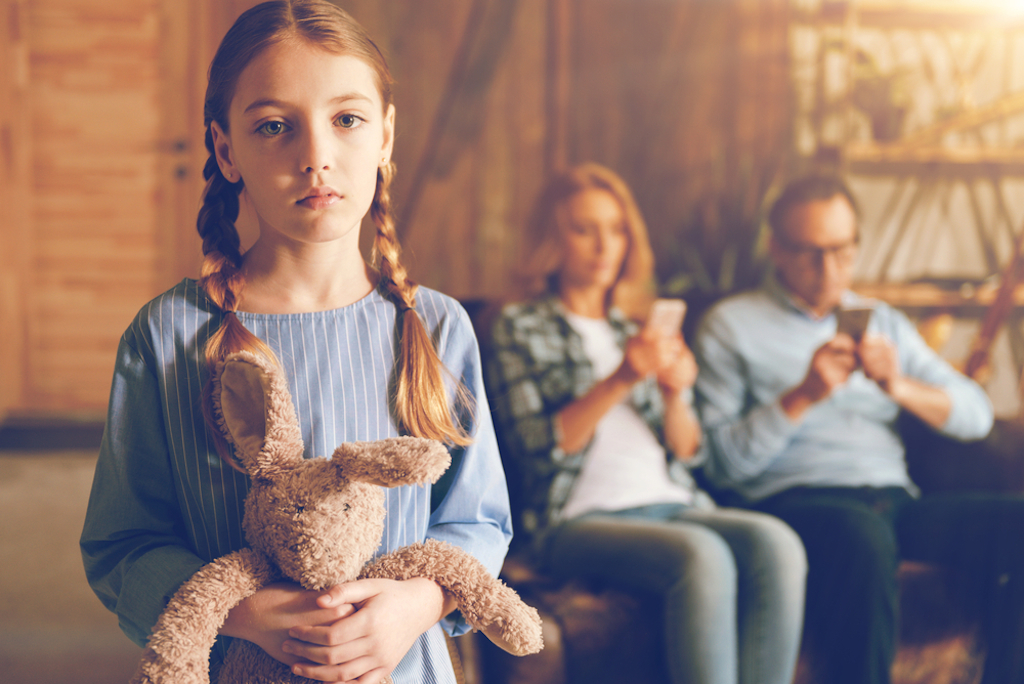 The researchers found an alarming amount of "technoference"—the official term for the way technology interrupts everyday face-to-face interactions—as it was found that smartphones or other technological devices got in the way of parent-child interactions at least once a day in almost every case. This corroborates with other studies that say that parents use technological devices for nine hours a day on average, a third of which is spent on smartphones. And for more about your telephone use, check out the 20 Ways Your Cell Phone Harms Your Health.ae0fcc31ae342fd3a1346ebb1f342fcb

According to the research, it seems that many parents turn on Netflix or flip through their phones in order to escape the stress of their child's difficult behavior. However, the data shows that this tactic backfires, as the lack of attention of meaningful communication leads to more sulking and tantrums in toddlers. Their bad behavior causes the parents to withdraw even further into technological devices, and both get caught in an increasingly terrible cycle that will damage their relationship further down the line.

"Children may be more likely to act out over time in response to technoference as opposed to internalize," Radesky added. 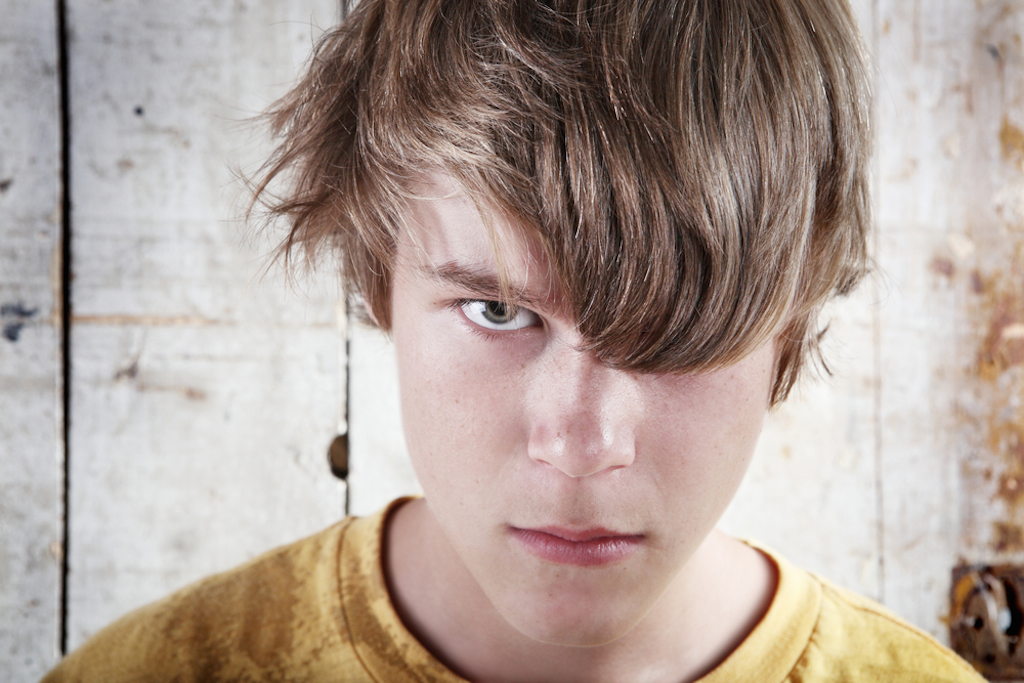 It's no secret that children need attention, and that ignoring them puts you at far greater risk of raising a teen that's vulnerable to substance abuse and other risky behavior. Recent studies found that parents who don't get enough sleep often end up not checking in with their teenage kids enough, leading them to act out by skipping school or taking drugs.

Since studies have also found that watching TV or flipping before bed seriously disrupts you sleep cycle, this addiction to technology is creating a spiral of bad parenting. Not to mention, if you're thinking of having more children, you should know that watching Netflix before bed is killing your sex life.

5
Other Side Effects Of Tech Addiction

Your smartphone addiction isn't just hurting your relationship with your kids, either. Research has found that "phubbing"—the act of ignoring someone you're with by engaging with your phone—is damaging all of your relationships. It's particularly detrimental to romantic relationships. Feeling isolated or ignored is the number one reason that women, in particular, cheat, and one of the primary causes for divorce.

So consider placing a ban on all technological devices when you're with other people, and imposing the rule on the entire family when you're together. No one wants to deal with a screaming toddler, but handling the situation instead of escaping into dog videos will benefit you enormously later down the line. And if you're still not convinced that technoference is a real thing, read about the Shocking Number of People Who Check Their Phones During Sex.

Diana Bruk
Diana is a senior editor who writes about sex and relationships, modern dating trends, and health and wellness. Read more
Filed Under
Parenthood
Read This Next
Latest News
Read This Next