If You Shop at Costco, Prepare for This Major Price Change in June

The warehouse wholesaler is due to increase the cost of this one essential soon.

Loyal shoppers flock to Costco for many reasons, but the ability to save a lot of money on purchases is likely to top most customers' lists. The warehouse retailer makes it easy to get a great deal on everything from everyday essentials to electronics and baked goods to batteries. But if you're a devoted Costco fan, you should be prepared for a major price change coming this June that could affect all shoppers. Read on to see what the beloved wholesaler is making more expensive.

RELATED: Target Is Getting Rid of This in Stores, Effective Immediately.

The price of Costco memberships will most likely go up in June of this year.

Costco may be unique from other discount retailers for offering items in bulk, but its most notable difference is the membership required to access those deals. And as half a decade has passed since the store made the last change to its annual membership price, executives are hinting that the cost of an entry card will likely be going up as part of the company's past price increase schedule.

"On average, they were done about every five—a little over every five and a half years, about five years and seven months," Richard Galanti, Chief Financial Officer for Costco, said during an earnings call on March 3, The Street reports. "And five years from the anniversary of the June of '17 would be this June. So I think the question will continue to be asked until we do or don't do something."

Experts project the price for annual membership could go up by $5 or $10 per year. 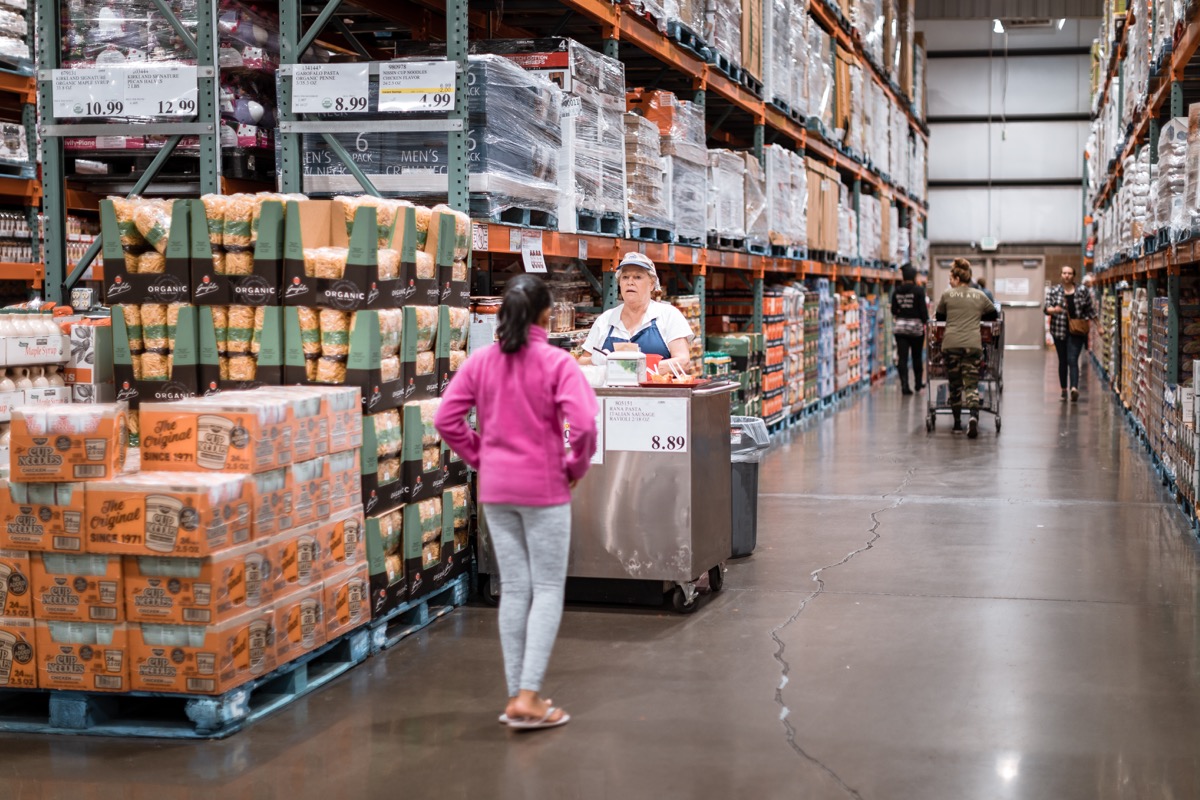 Currently, Costco customers have the option of signing up for two types of membership. Gold Star members pay $60 a year for access to the store for two members per household, including the ability to purchase items on Costco's website. Executive members pay a higher annual rate of $120, but they also benefit from receiving two percent cash back on all qualifying purchases of up to $1,000 per year.

Costco has raised the price of its memberships on schedule every five years, John Heinbockel, an executive analyst with Guggenheim Securities, wrote in a research note, according to Yahoo Finance. Considering this, he believes the annual cost for Gold Star memberships will rise by $5 to $65 per year, while Executive members should likely expect to see their prices go up $10 for a yearly fee of $130.

Costco customers have been renewing their memberships at a high rate.

Even though Costco has long been a beloved option for shoppers looking for a good deal, the pandemic saw a wave of new and regular customers alike flocking to the warehouse to pick up bulk quantities of essential items when lockdowns limited trips out of the house. But even as the world has begun to return to normal, the company said existing members are opting to stick with the store, boasting a membership renewal rate of 92 percent across the U.S. and Canada.ae0fcc31ae342fd3a1346ebb1f342fcb

"At the end of the day, we certainly feel very good about our member loyalty," Galanti said during the earnings call. However, he remained cryptic about the potential rise in membership cost, adding: "At some point, it'll happen. But stay tuned."

Costco isn't the only major retailer considering a hike in membership prices. As of Feb. 18, Amazon raised the price of its Prime subscription service from $119 to $139 per year for its customers in the U.S., USA Today reported. The cost of monthly memberships also increased by $2 from $12.99 to $14.99 for subscribers who don't hold an annual subscription.

Prime subscribers who already held membership before Feb. 18 won't see the price increase until March 25. After that date, their next renewal charge will reflect the new cost. According to officials with the company, the price increase reflects "the continued expansion of Prime member benefits as well as the rise in wages and transportation costs."

While it's only an add-on to the service, Prime membership has become popular among Amazon customers—especially during the pandemic. In 2021, the company said that it had added more than 50 million new subscribers over the previous year, bringing the worldwide total to more than 200 million paying members, The Verge reports.

RELATED: Shoppers Are Threatening to Boycott Dollar Tree—Here's Why.

Zachary Mack
Zach is a freelance writer specializing in beer, wine, food, spirits, and travel. He is based in Manhattan. Read more
Filed Under
News • Shopping
Read This Next
Latest News
Read This Next