15 Things You Should Never Buy at a Second-Hand Store

Put down the used hairbrush immediately.

With such a high demand for cheap commodities, the used goods industry is rapidly growing. According to the Bureau of Labor Statistics, the number of people employed by used merchandise stores in the United States jumped from approximately 125,000 in 2010 to more than 173,000 in 2016. There are obvious reasons to turn to a second-hand store for shopping needs (namely, because it's cheaper), but not everything can be acquired at the thrift store—at least, not without risks.

For instance, anything that touches your head—like a hat, helmet, or hairbrush—cannot be bought used without the risk of acquiring an infection. And godspeed if you decide to purchase a used phone at a second-hand store—that thing has a 50 percent chance of ever even turning on. Before you take a trip to the thrift store, read up on the items that you should avoid at all costs. And if you love a good bargain, then you'll appreciate these 20 Easy Ways to Stop Wasting Money. 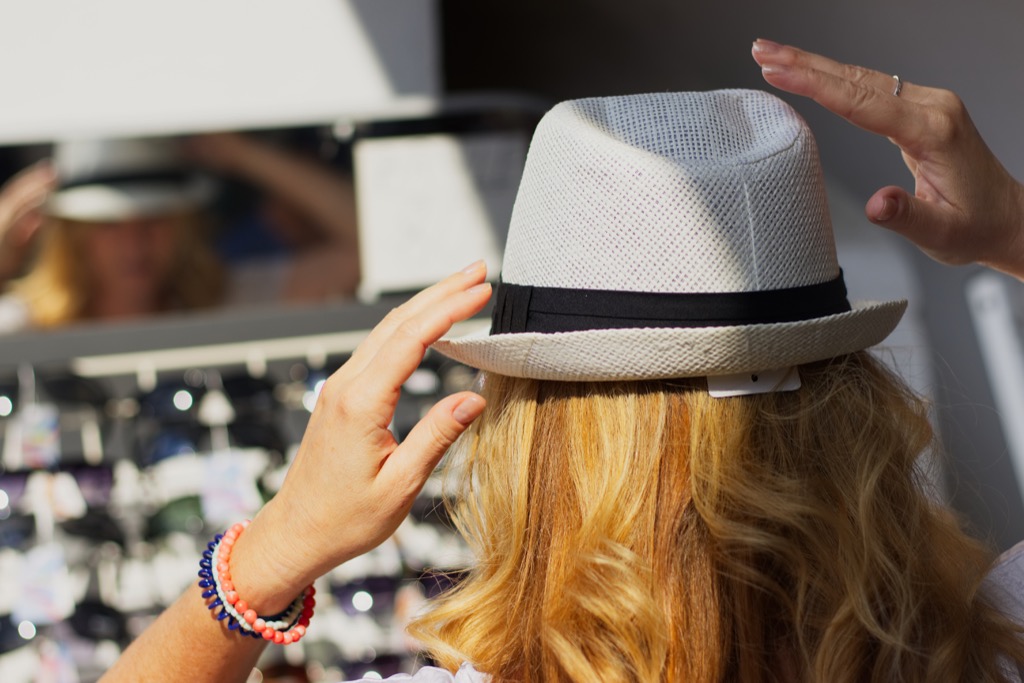 When you buy a hat at a thrift store, you know nothing about the previous owner's hygiene or health. Most people don't ever actually wash their hats, which means that if the last person to wear the hat had lice, then so much as trying on that hat could expose you to an infestation.

Buying a helmet at a second-hand store is just as bad as buying a hat. Helmets tend to be worn when people are sweating profusely—and when we sweat, we create a breeding ground for germs of all sorts. Not to mention that a used helmet could easily be damaged without your knowing it, which could put either you or your kids at risk. And for more cautionary tips, don't miss the 15 Ways to Be a Safer Female Solo Traveler.

"Germs, odors, bed bugs, mold, and allergens can all be lingering inside that cute stuffed bunny," warns Stacy Ott, CEO of Six Dollar Family. When it comes to your children's safety, you can never be too cautious, so always opt for a new stuffed animal over a used one with questionable origins. And if you're a parent, then you'll appreciate these 40 Lies Kids Say That Parents Always Fall For.

Think about all the things you've done on your mattress. Now ask yourself: Would you feel comfortable sleeping on someone else's mattress every night, knowing that they've likely done those very same things? Plus, you don't know whether a used mattress is teeming with bed bugs—and it's not worth taking that risk. 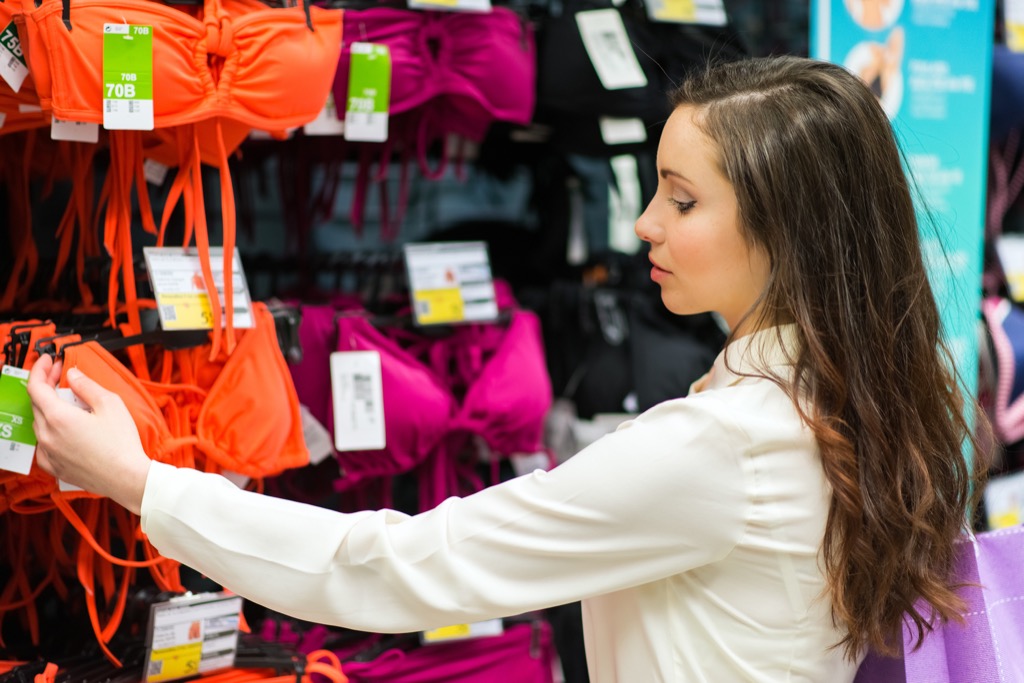 There's a reason that new swim bottoms come with a protective lining. Swimsuits aren't that much different from everyday undergarments, and wearing a used one is basically the equivalent of sharing underwear with a stranger. 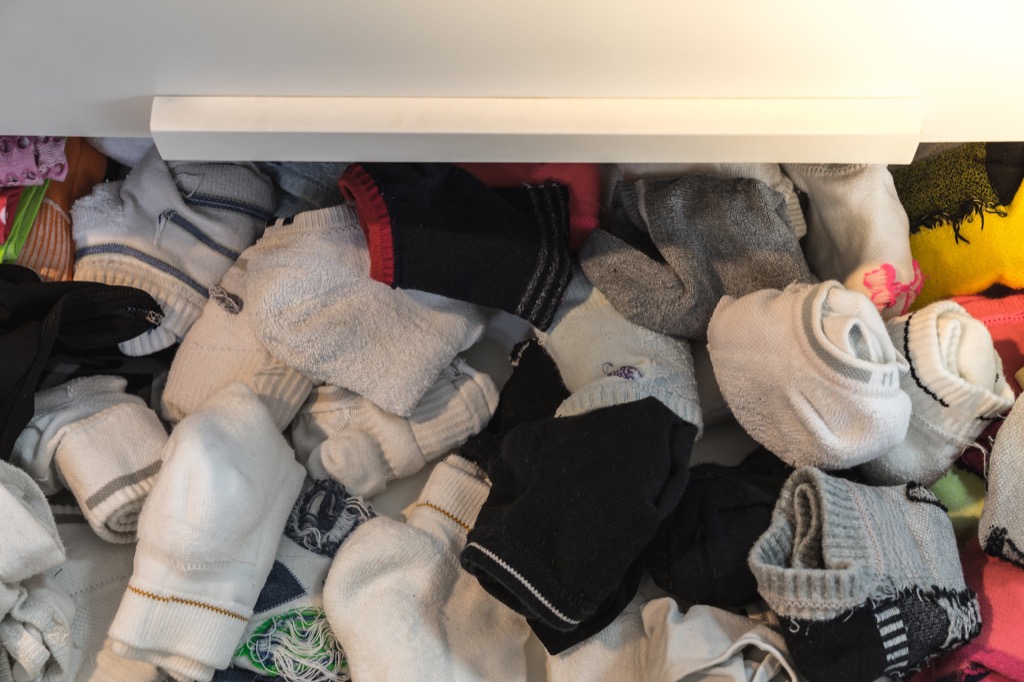 Unless they're in their original packaging, don't take a chance on socks at a second-hand store. Socks are a breeding ground for odoriferous bacteria—and in some cases, even a trip through the washing machine isn't enough to eliminate them. Pee-yew!

As Dr. Allison McGeer of Mount Siani Hospital in Toronto explained to Global News, using pre-owned makeup can lead to infections like cold sores and pink eye, or, in severe cases, "a multi-drug-resistant gram-negative bacteria that can lead to death." And while some people suggest using alcohol to kill germs living on the used items, Dr. McGeer warns that this "won't get at any bacteria that are even slightly protected by the makeup." And for more healthy makeup tips, This Is the Safest Way to Clean Your Makeup Brushes. 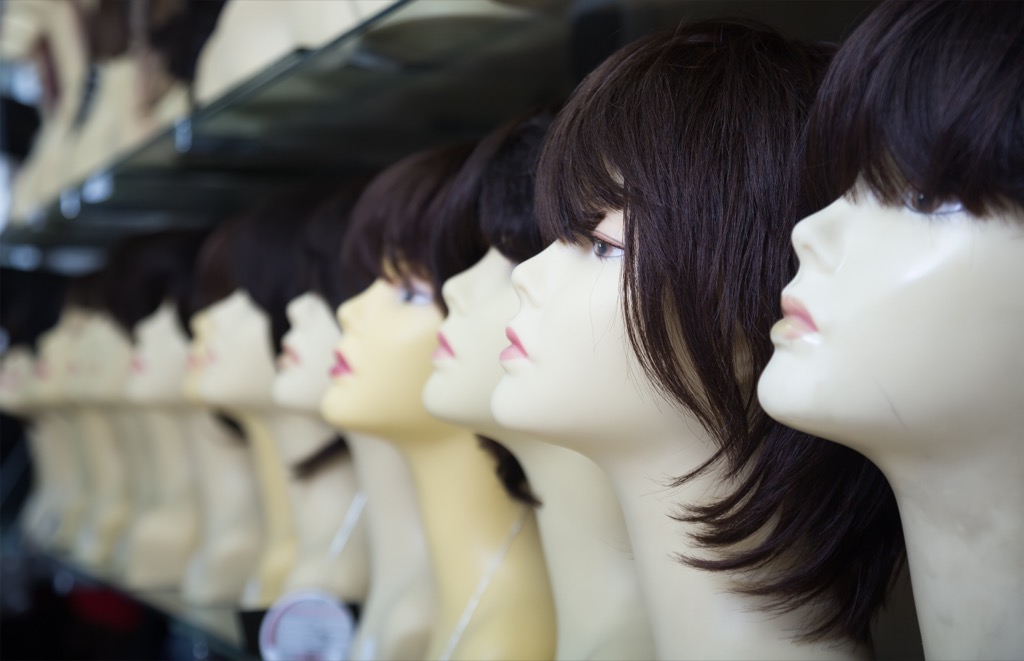 Like anything that sits on your head, used wigs are often crawling with germs. And not only that, but without the proper guidance of a specialist, you could end up buying a wig that you're allergic to.

Ironically, the kitchen sink is full of bacteria and other dangerous particles. One study found that the average kitchen sponge is home to zillions of microbes, many of which can cause infections. And if you don't know who's doing the dishes or how they're doing them, they you can't be sure just how many of those dangerous particles are being eliminated. This isn't a risk you want to take, especially when it comes to things you'll be eating off of. And for more ways to maximum hygiene, learn the 27 Ways to Clean Your House Like a Pro Housekeeper. 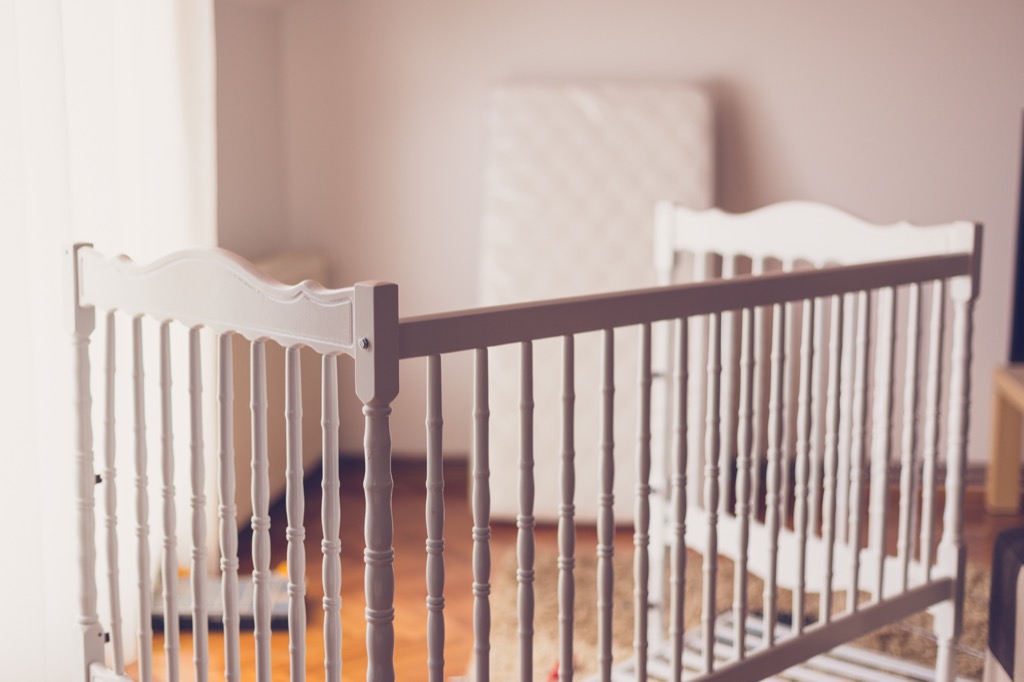 Having a baby might be expensive, but a crib is not something that you'll want to skimp on. "[Buying a used crib] can be incredibly dangerous for your infant since recalls are so hard to keep track of and often, damage is so small that it can go unnoticed," Ott wrote.

There are so many things that can go wrong with used electronics. A television can stop working, for instance, or a phone can have a faulty camera. And when these things do happen, your electronic won't be under warranty—as you bought it used at a second-hand store—so you'll either have to spend more money getting it fixed or just buy a new one, after all of that. 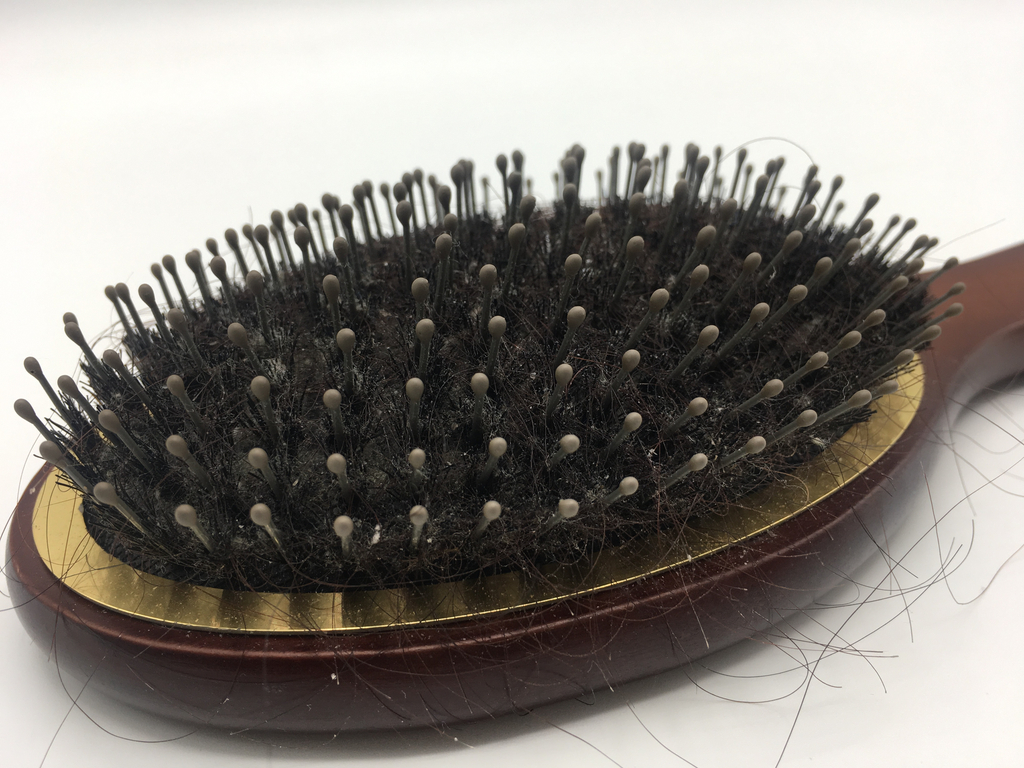 Between the old haircare products and the clumps of loose strands, hairbrushes are bacteria's best friend. "The buildup on your hair brush can serve as nidus for bacteria and yeast overgrowth, so there is an infection risk," Dr. Sejal Shah explained to InStyle. And most people don't know that they should be washing theirs at least once a week, so using someone else's hairbrush is like asking to get sick. 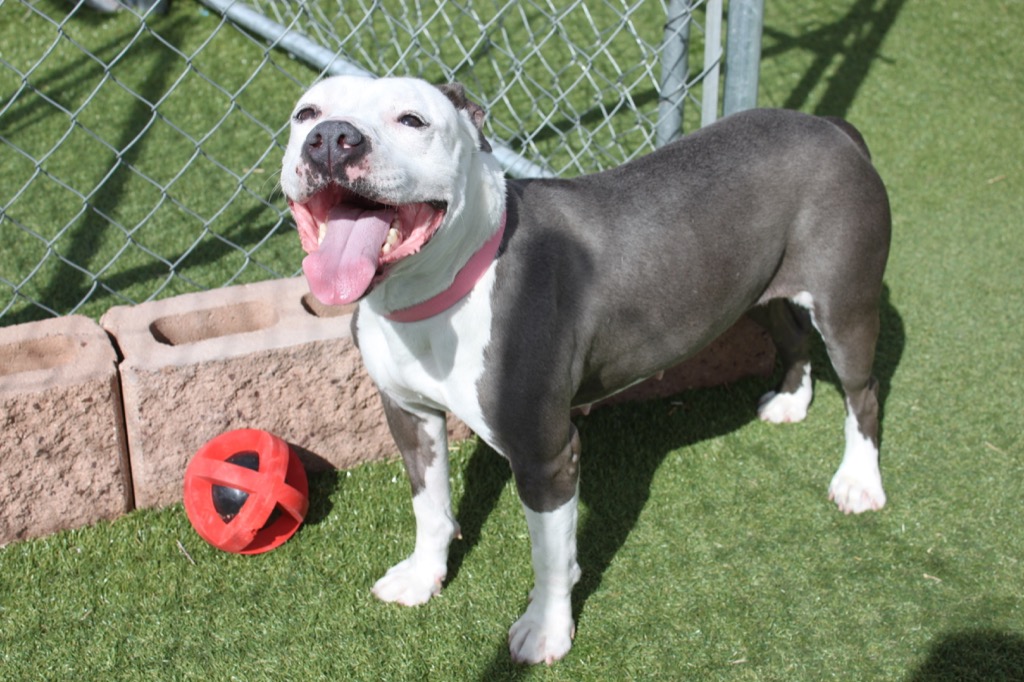 According to a study from the National Safety Federation, pet toys are one of the dirtiest items in your home. These toys are often covered with yeast, mold, and bacteria, including the bacteria responsible for Staph infection. Most people don't think twice about how gross their pet's toys are, and they certainly aren't going to right before donating them. Also, pet toys are just one of the 20 Things in Your Home You Didn't Realize You Should Be Cleaning.

If you see food at a second-hand store, the reality is that it's probably either expired, stale, or moldy. Groceries are expensive, yes, but so is a trip to the hospital.

"Older versions of halogen lamps lack the protective glass/wire frames over the bulbs to prevent the lamp's extreme heat from affecting flammable objects, like curtains," warns thrifting expert Sammy Davis. No amount of money is worth potentially setting your house on fire, so please, leave the halogen lamps at the thrift store. And for more second-hand shopping hacks, don't miss the 8 Tips for Shopping a Thrift Store Like a Fashion Stylist.