17 Amazing Christmas Stories That Show The Power of Human Kindness

For every Ebenezer Scrooge, there's a Bob Cratchit.

The Christmas season is a time of joy, it's a time for family, and it's even a time for totally stressing out. But it's also a time giving back to those in this world who are less fortunate, those who are suffering from grief, and those who need the comforts of yuletide cheer more than the rest of us.

If you're looking for some great, feel-good inspiration as we head into the holiday season, read on—because here we've compiled some major examples of human kindness during December. Just be sure to keep a box of Kleenex handy. 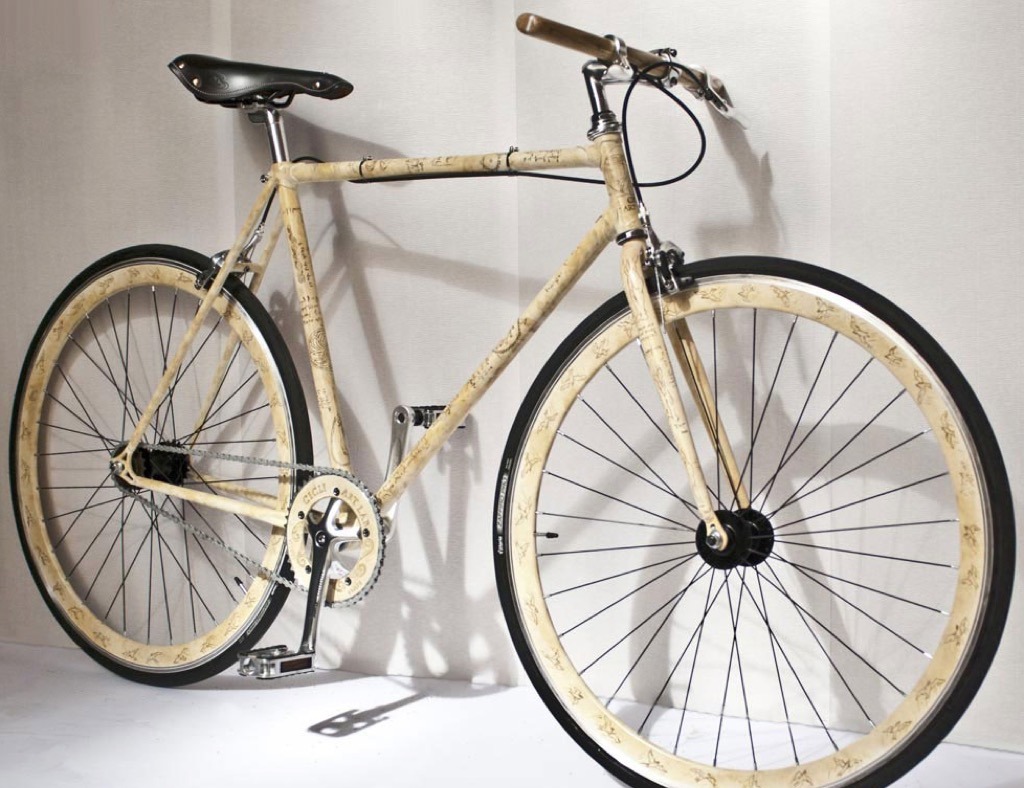 William Lynn Weaver shared with NPR an amazing story from his childhood in which his father treated a young stranger with remarkable kindness. After finding one of the family's bikes stolen, the pair tracked down the culprit, only to find the ten-year-old boy tearfully hiding behind his grandfather explaining that he "just wanted something for Christmas."

Returning home with the bike, Weaver's father began gathering coal and asked if the family had an extra set of wheels. Without a word, he returned to the thief's house, bike and coal in hand, and handed them over to the child—along with an extra $20. "Merry Christmas," was all he said.

Asha Beasley's father, Patrick, had been in the dog house for weeks for throwing out his wife's vintage Chicago Bears football jersey. When Patrick died suddenly in the lead-up to Christmas, Asha discovered within his closet a replacement for the jersey—wrapped up and ready to give to his wife. Following his guidance, Asha placed the jersey under the tree, surprising Mrs. Beasley in a heartfelt moment that would become viral. 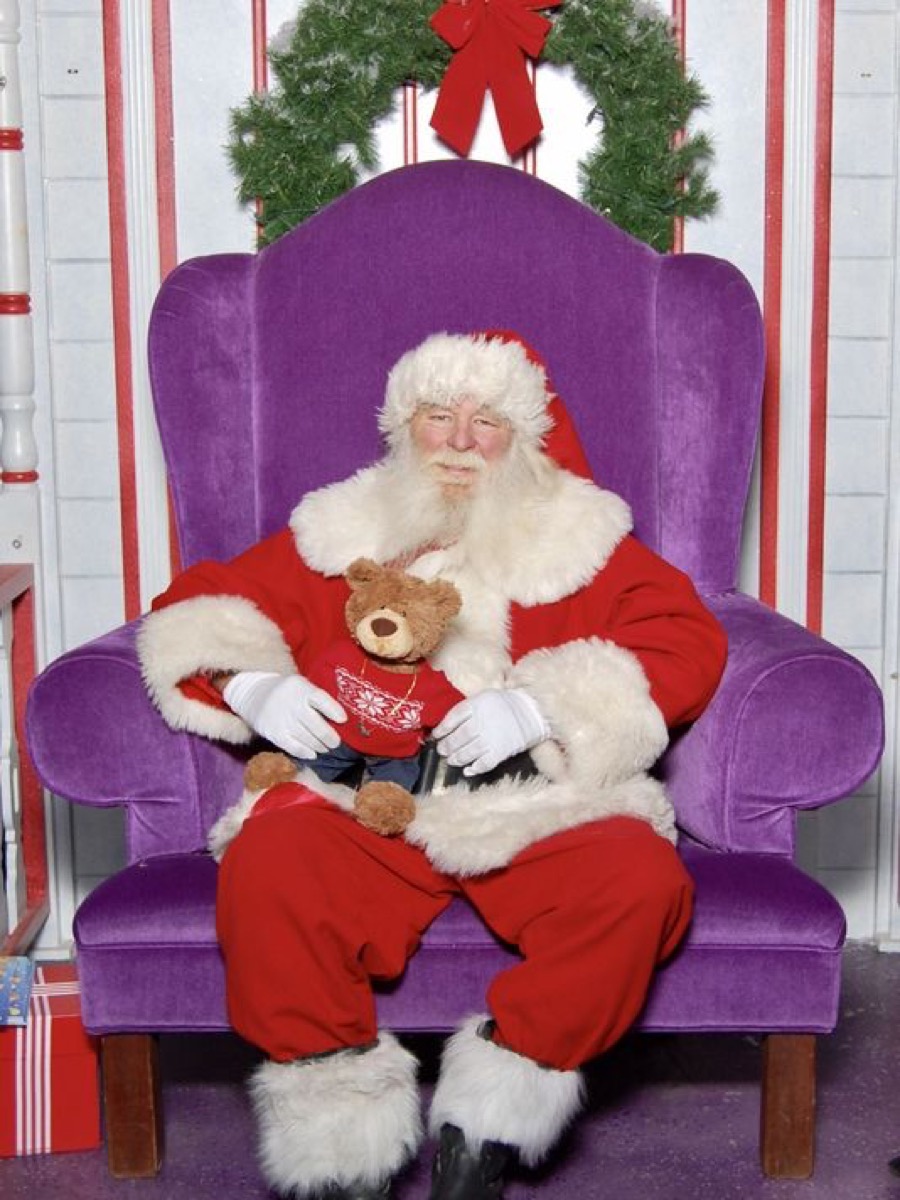 Amanda Berman had been given a teddy bear by a local ministry on the day of the birth of her son, Ian. After she lost Ian to complications soon thereafter, the bear became a token of his continued memory.

When Christmas came around, Berman apprehensively visited the local mall to ask if Santa would take a picture with her special stuffed friend. Despite Berman's fears that people "would think [she] was crazy," the meeting surpassed her expectations. "I was just in awe of the kindness and generosity of the people in the community…thank you from the bottom of my heart," she told the York Daily Record. 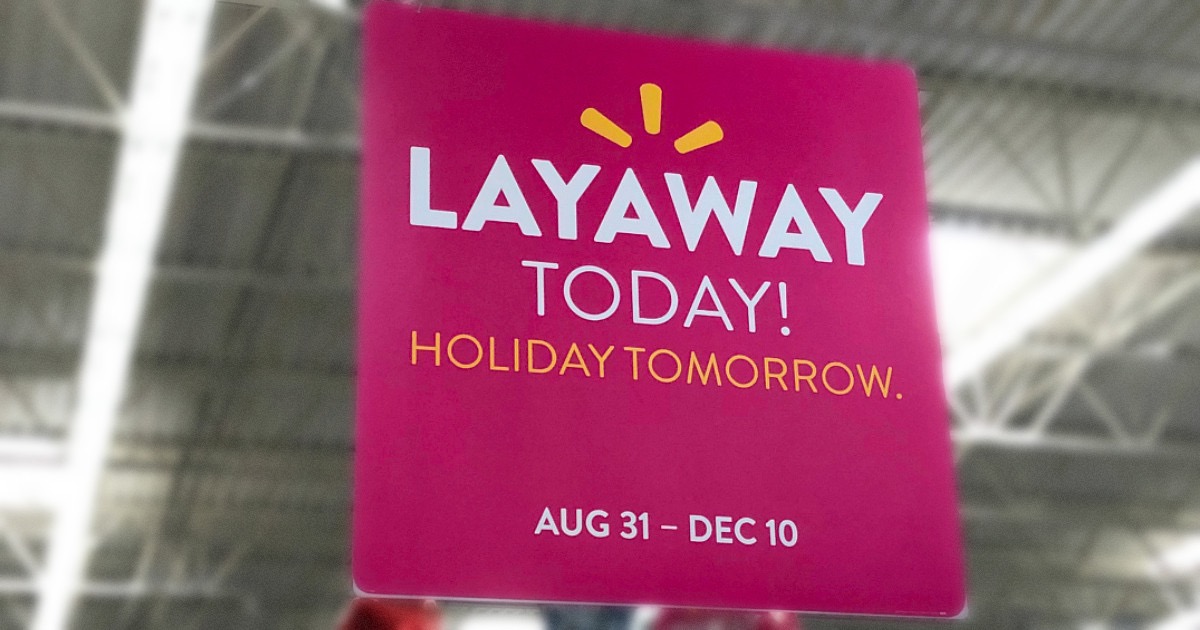 This year, hundreds of Walmart customers arrived at the superstore to find a surprise. While they were gone, a mysterious person had come in and paid off all of the Christmas layaway payments currently outstanding at the East Marlborough location—$29,000 worth of products.

While the man hoped to remain anonymous, he ran into one customer who after experiencing his generosity asked for his name. "Kris Kringle," he told her.

Nichole Philipps shared a Christmas story she received about a down-on-her-luck mother and son with the Grand Forks Herald. The two had been thinking about the cold, t-shirt-clad boy that had served them that day at the Wendy's drive-through when they received a generous holiday gift from their local church. Speeding off to Walmart, the pair spent their present on a jacket, afterwards heading back to Wendy's to surprise the boy with his gift.

"But you don't even know me," he protested as he received their generosity. "Doesn't matter. I know you needed a coat," the mother replied. 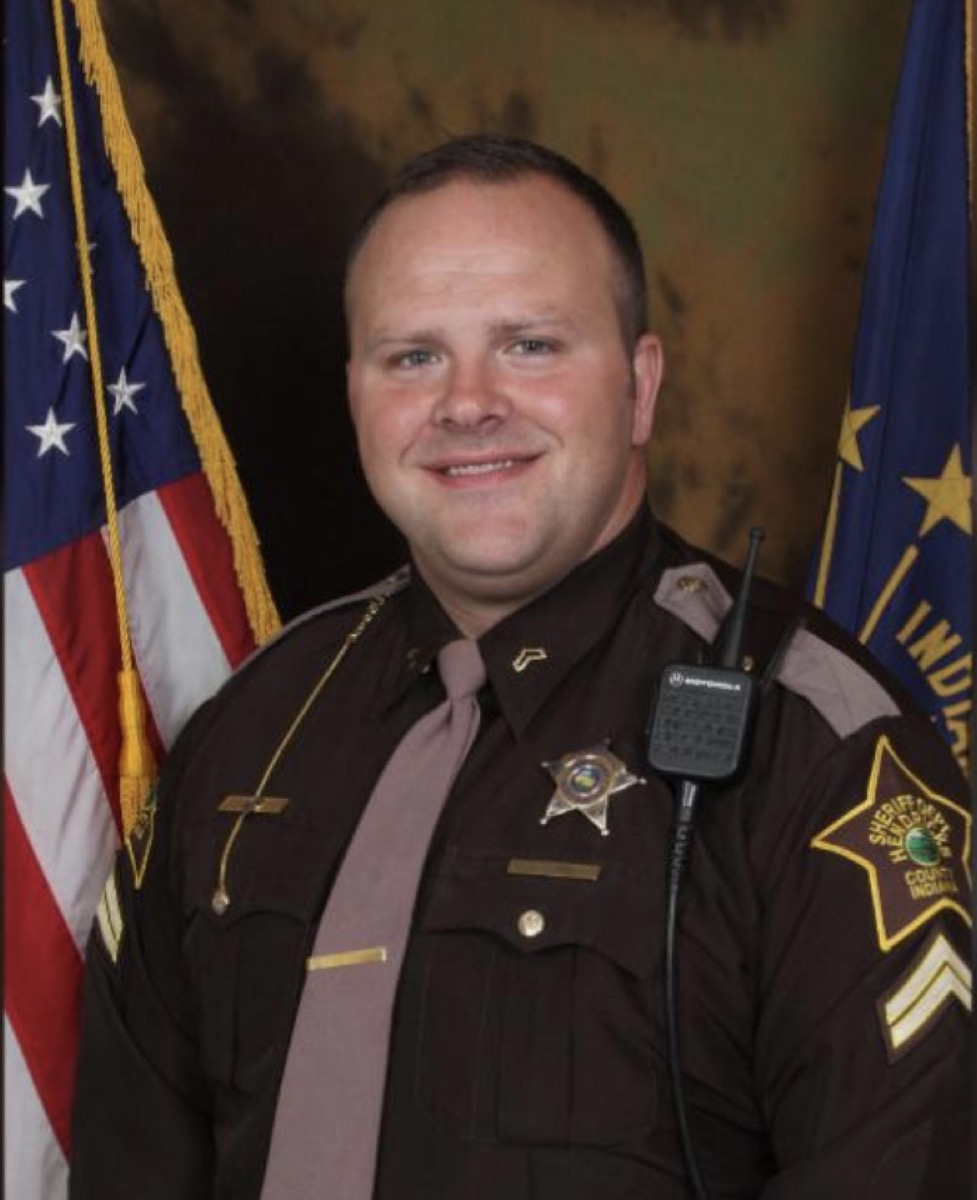 When Megan Nierman was pulled over for speeding and driving with expired plates, she tearfully explained that she was going through a difficult time as a single mother. Touched, the officer, Sgt. Evan Love, told her that if she renewed her plates within the week, he would rip up the ticket.

But that wasn't all: with Nierman and the upcoming holidays on his mind, Love solicited donations from family, eventually surprising Nierman at her place of a work with a Christmas card—and a $300 gift card to Target. "This guy is perfect," Nierman told CNN. "Any police officer should want to be like this guy."

Writer Hayley Webster shared a touching story about one of her childhood Christmases. After spending most of the lead-up to the holiday defusing tensions with the family, Webster found herself without much Christmas spirit—a fact lamented by her father's girlfriend who told it was "a shame" no one took care of her during the holiday season the way she cared for her younger sister.

When the big  day finally came around, Webster found an envelope waiting for her with the sheet music to "Walking in the Air"—a popular song she had been trying to teach herself on piano—enclosed, given to her by that girlfriend. "It was the nicest, loveliest, kindest, small, lovely thing," she said. "I remember it every year, every single year."

8
Christmas Day Meal For The Homeless 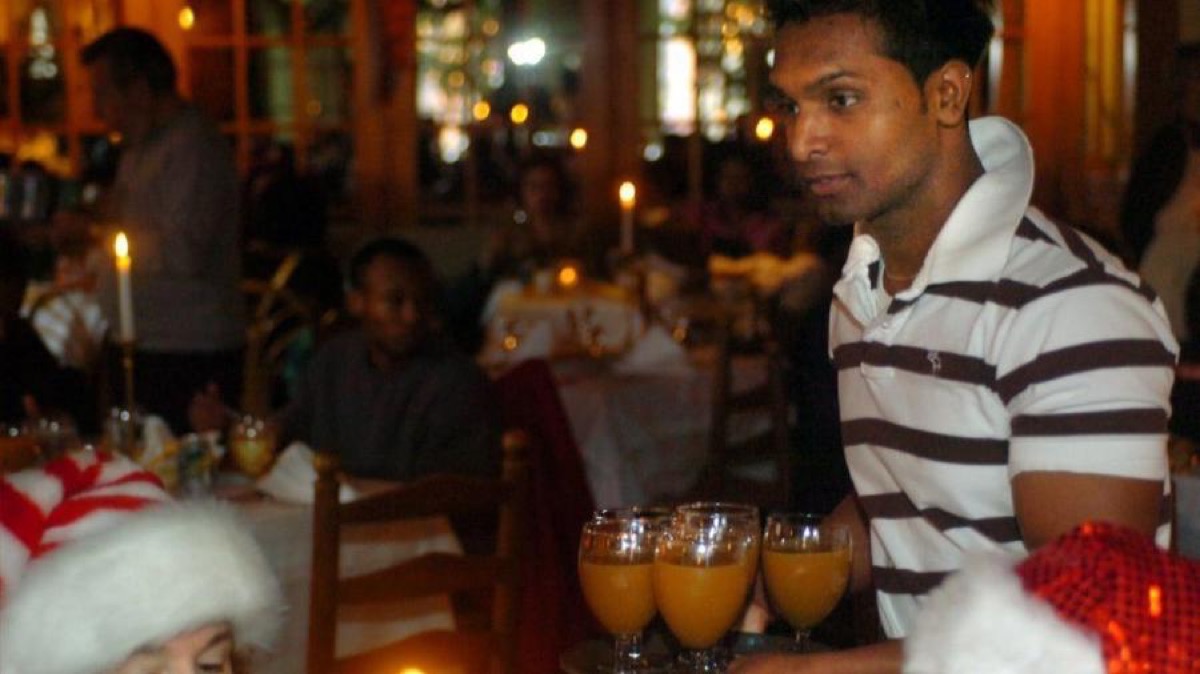 Every year, hundreds of homeless residents of Manchester, Connecticut, are treated to a warm, Christmas day meal courtesy of Make A Christmas. The organization, started in 2001 by then-high school student Raju Gomes, serves a white tablecloth dinner for those in need and collects presents for children. This year, the festivities will be held at Manchester Country Club, and calls for donations and volunteers have already been sent out. "This holidays…you and I have an opportunity to make a difference," says Gomes. 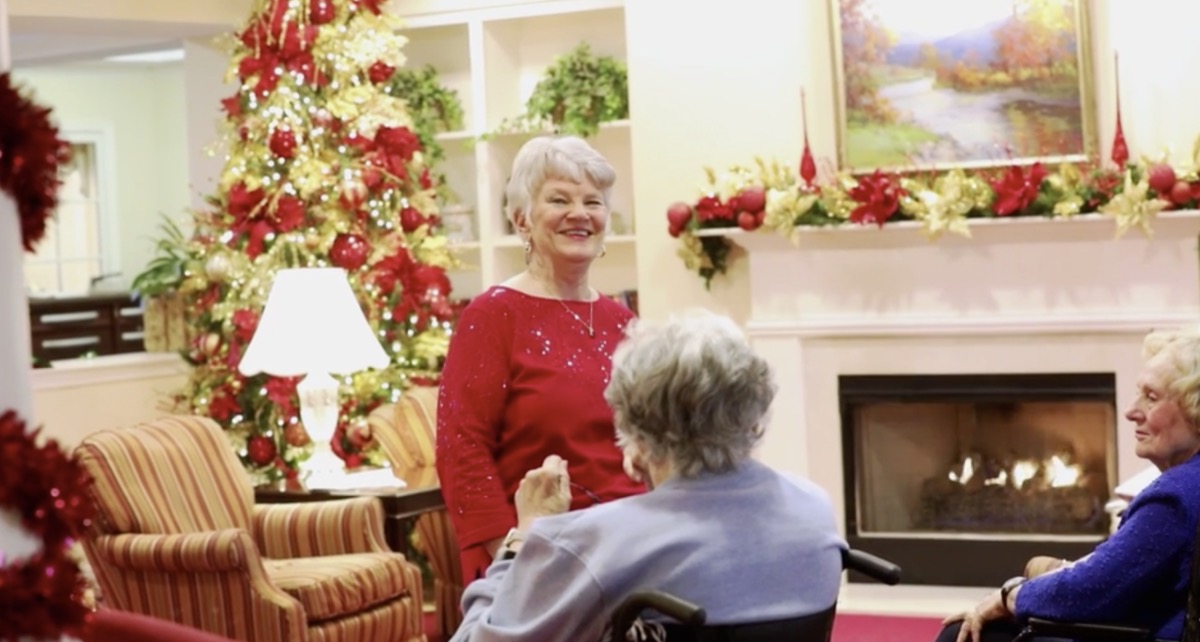 For years, Pat Lewis has been visiting the Kingston Residence of Sylvania assisted living facility to put up Christmas decorations for the residence. The practice—which takes over seven hours and costs hundreds of dollars—has earned her the affectionate title "Tree Lady." "If there are angels on Earth, she is one of them," said one volunteer at the home.

Lewis, meanwhile, is modest: "It's just my time of the year," she told reporters. 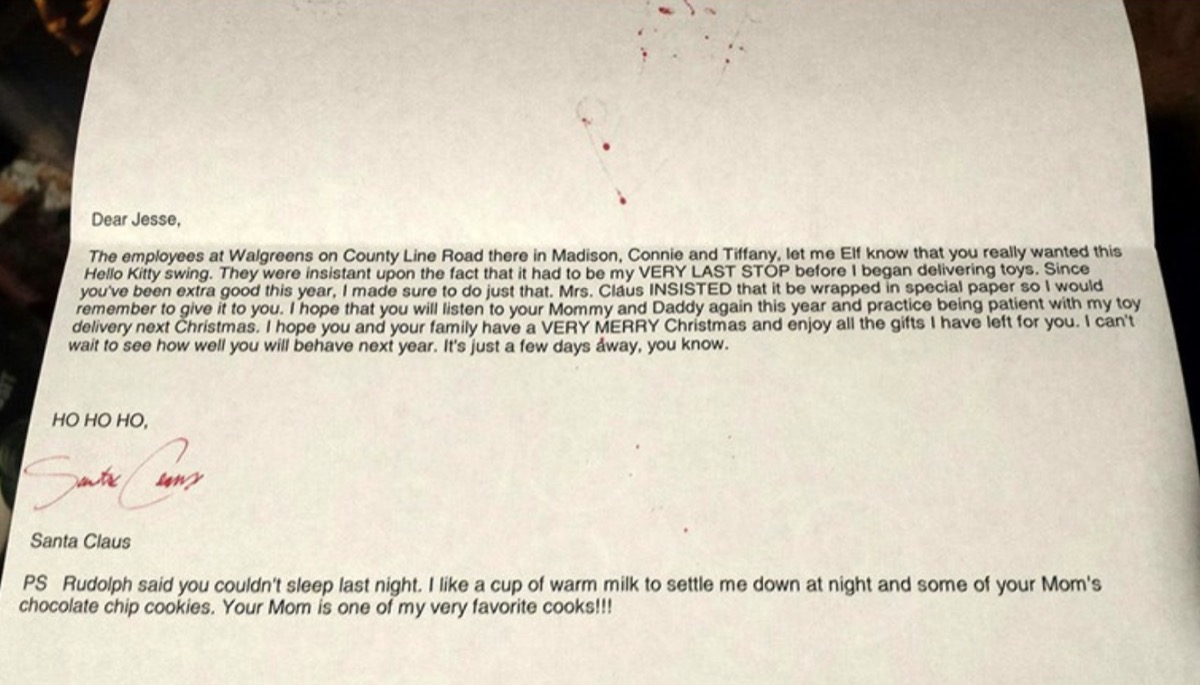 Jesse Cooper, 5, had been dealing with delays in behavioral control for years. When he showed great strength in remaining patient during a trip to the local Walgreens with his mother, the employees there wanted to do something special for the boy.

Purchasing the gift that his mother had set aside for him promising she would come back, they surprised the family by sneaking in a written note from "Santa Claus." After opening the gift on Christmas, the family found the note which—along with detailing the importance that Saint Nick placed upon this particular gift—added that Santa "can't wait to see how well you will behave next year." 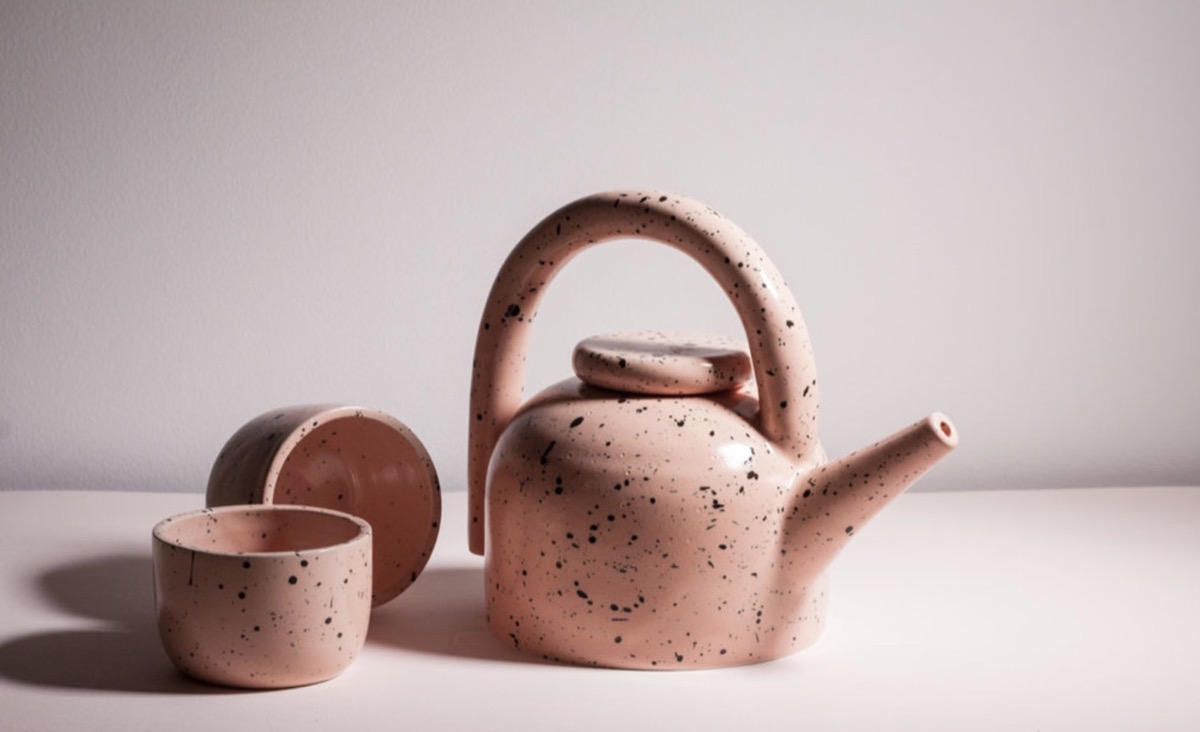 Writer Michael Langan shared a story of Christmas kindness involving his daughter with the Pittsburgh Post-Gazette. Having lost her husband in war, she was having a difficult time keeping up with work and remaining in a festive mood for the holidays knowing she would spend them alone.

On Christmas morning, however, her doorbell rang: a stranger came by to say she had left her credit card at the gas station and he was coming by to return it. After admitting he was embarrassed that the gift he had gotten her for her trouble was wildly inappropriate—he had bought her a tea kettle thinking she was an older woman—the two got  into a discussion in which each revealed they were recently widowed. Inspired by their connection, she invited the man in for tea from the new kettle he had brought. Neither had to spend Christmas alone. 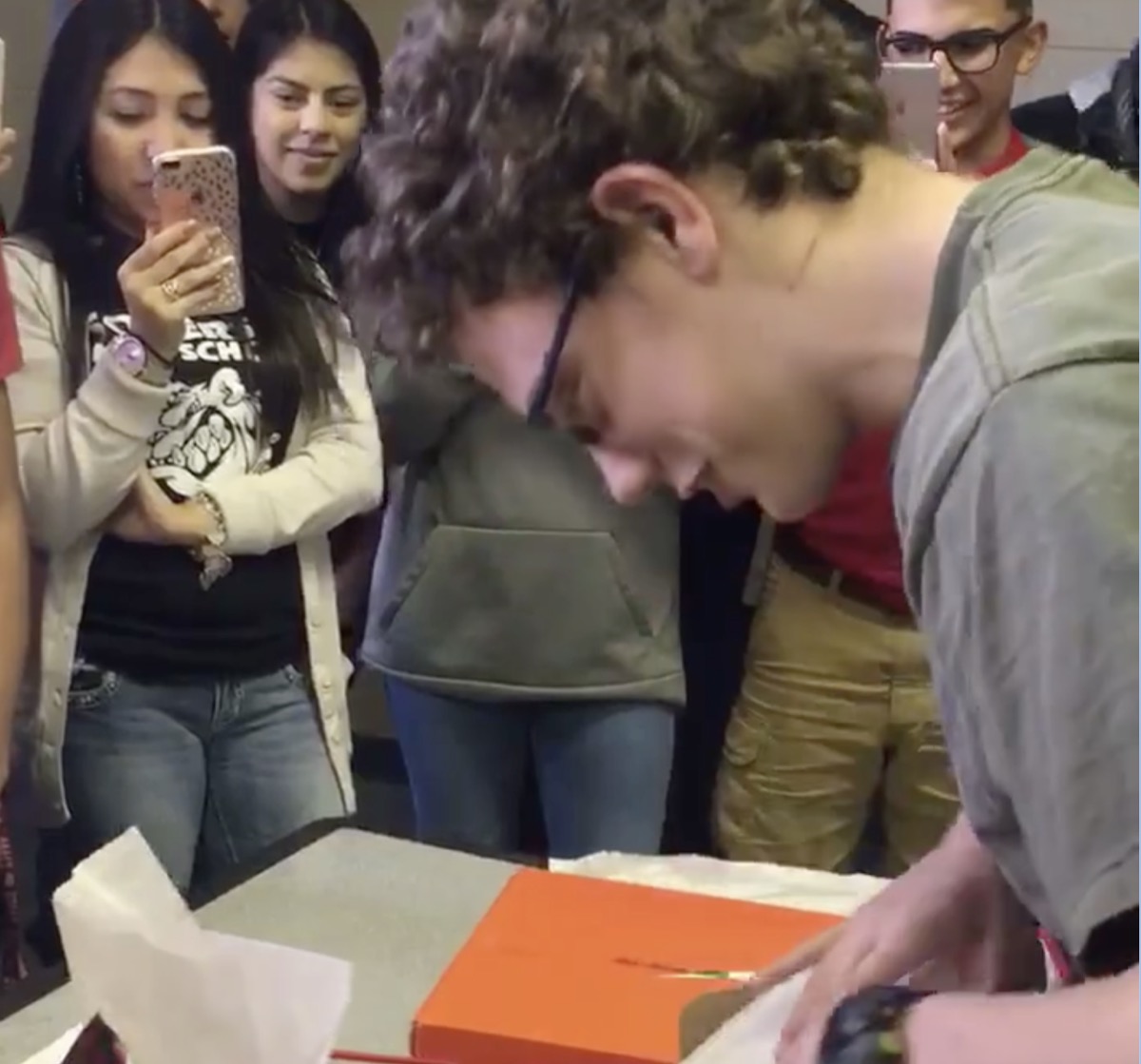 When two high schoolers learned that one of their friends was wearing boots one-and-a-half sizes too small for him, they decided to do something about it. Salvador Solis and a friend, classmates at a Texas high school, raised $180 between the two of them to purchase the friend, J.R., two pairs of Nike tennis sneakers for Christmas. They presented the sneakers of December 15 in a video that subsequently went viral. In it, you can hear J.R. exclaiming that only did they got his "favorite kind" of shoe, but his favorite color, as well—green. 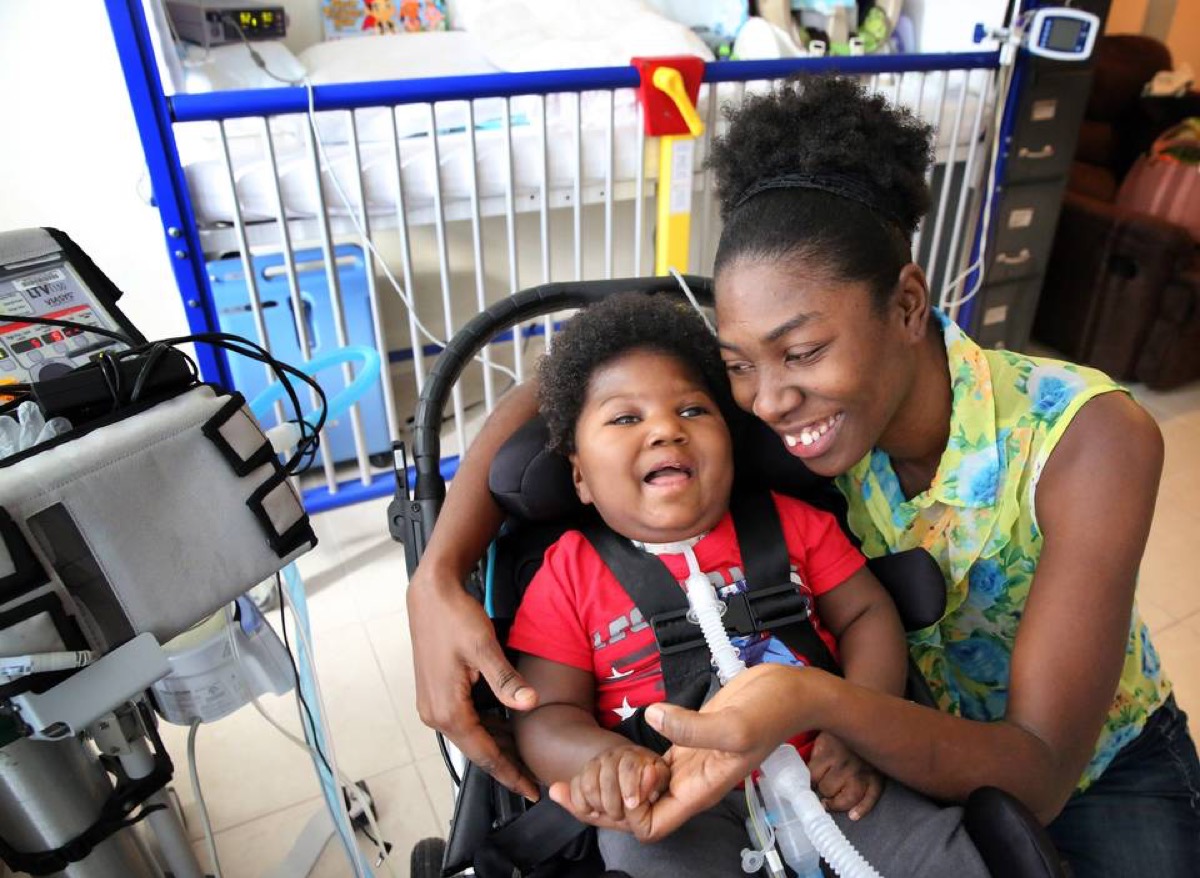 Wish Book is a Miami-based nonprofit led by the Miami Herald that has, for more than 36 years, delivered on the wishes of South Florida's neediest residents during the holidays. While the program has performed an endless list of good deeds, one of their most notable projects was for Samuel Augustine in 2017.

Born prematurely, Samuel faced a host of difficulties, and his family requested a wheelchair to replace one he had grown out of. Instead, the charity not only gave Samuel a new wheelchair, but brought in a furniture store and a design company to redesign the family's apartment in a way to make Samuel's transportation easier. All in all, the project cost upwards of $33,000, only about $8,000 of which was for the wheelchair itself.

When the television show Children In Need made it apparent to Jazmin Nicholl, eight, that there were kids close to home living in dire circumstances, she knew she had to do something about it. After some research, she decided to write and record a video appeal for the local charity Pied Piper, asking for donations of toys for the holidays. And her initiative paid off: since recording her appeal, the "response has been amazing," likely a result of her obvious earnestness. Kids these days… 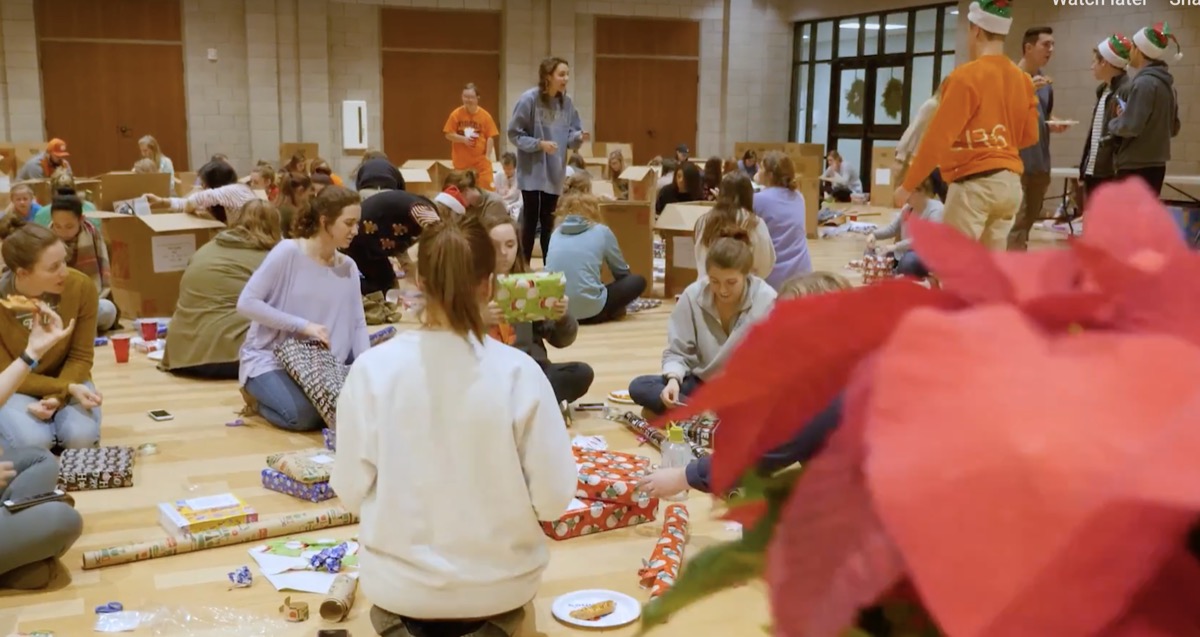 As a freshman at Clemson University, Price Crenshaw already had her mind at other things: giving back. Following recurrent dreams stemming from a moving speech she heard by the founder of Charleston Hope, a charity which wraps and delivers Christmas presents to elementary school students, she decided to begin her own chapter.ae0fcc31ae342fd3a1346ebb1f342fcb

Despite simultaneously dealing with the trials of freshman year, Crenshaw founded Clemson Hope and partnered with a whopping 620 elementary school students—three times that of the already well-oiled Charleston chapter. Nonetheless, when the day came, more than 100 volunteers helped wrap and deliver presents to the lucky kids, getting the job done.

16
The Act of Kindness Network 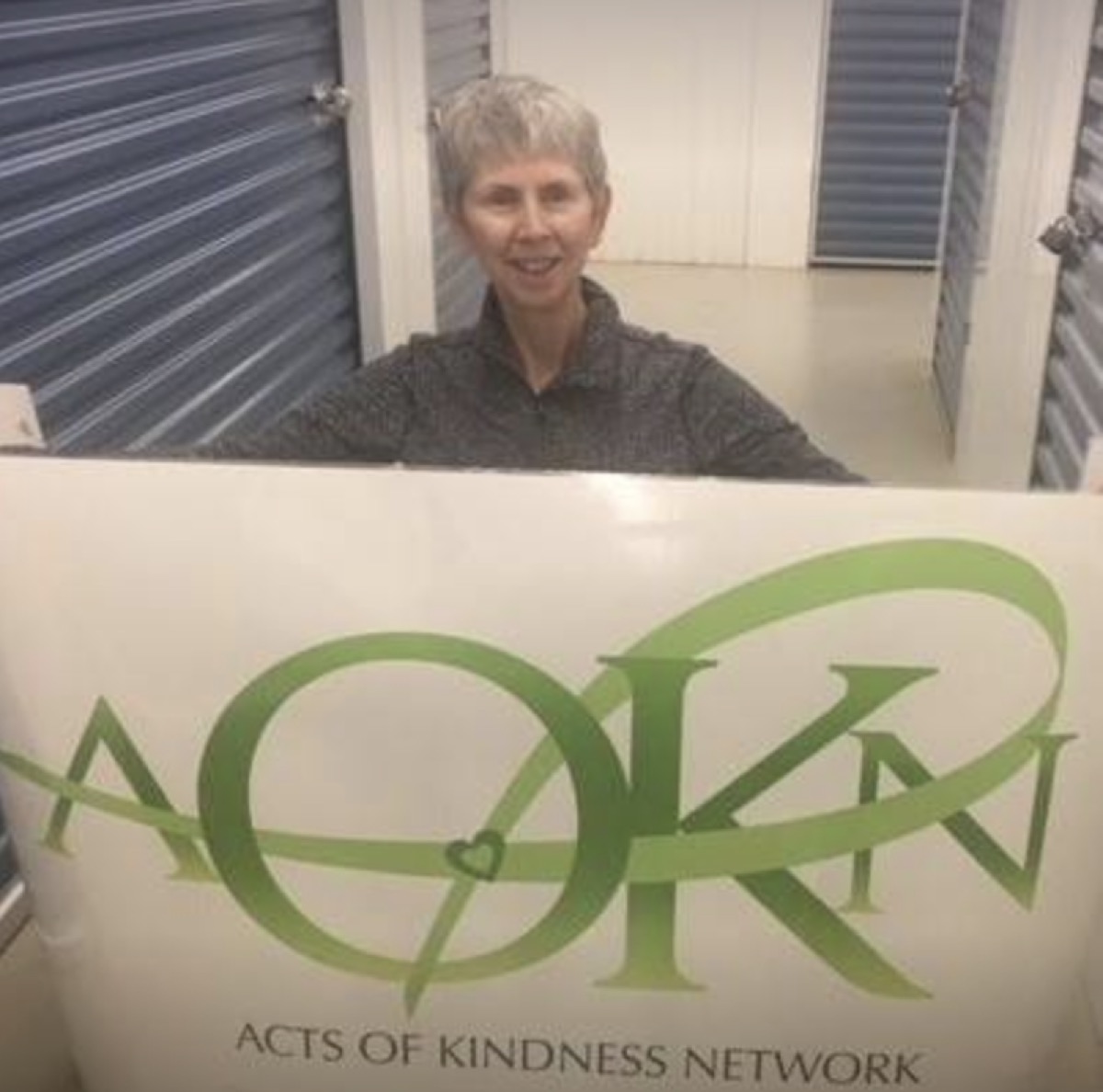 The Act of Kindness Network (AOKN) is a small, Burlington-based non-profit which since 2002 has been asking citizens to not only help those in need, but to identify them, too.

First, they ask residents to nominate others for potentially receiving a gift pack during the holiday season: "It could be a family member, a friend, a colleague or a neighbor who has lost loved ones to death or divorce," they write. Then, they ask residents to donate items or gift packs which the network can then distribute. The whole process helps the community together by offering the opportunity to receive and to give. Despite their small size, the AOKN had already received over 400 gift pack requests this year, with no signs of slowing. 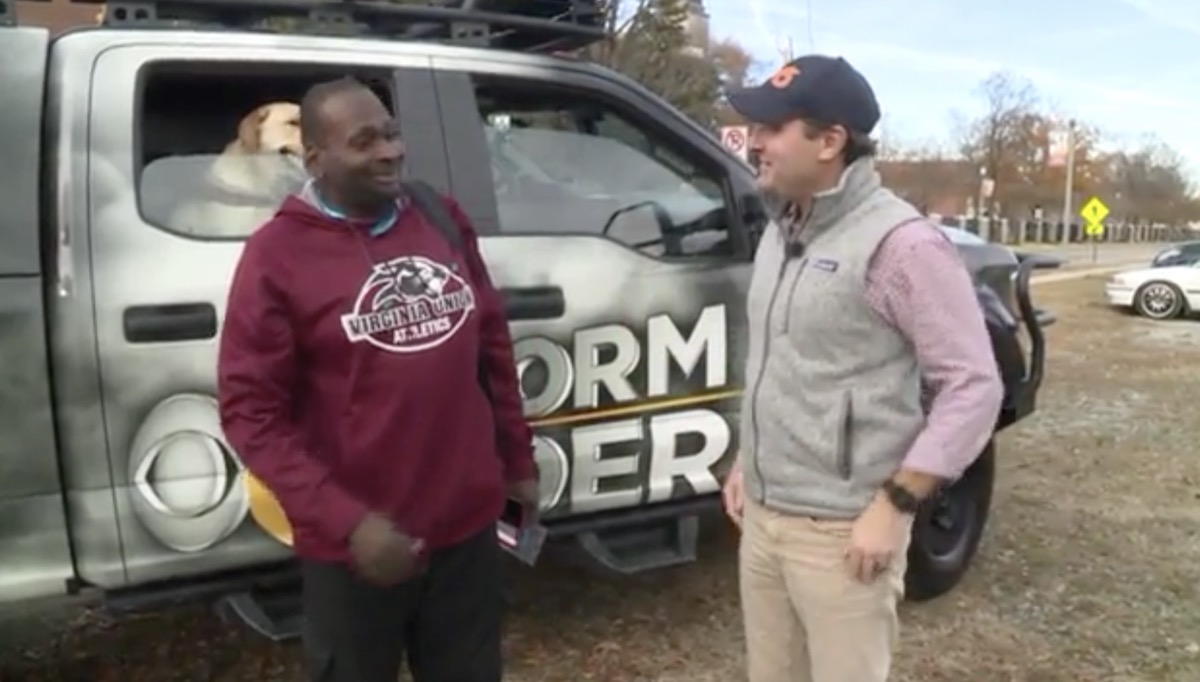 For the past few years, CBS meteorologist Zach Daniel has been putting his Storm Rider all-weather vehicle to special use during  the month of December. To spread holiday cheer, Daniel shows up to bus stops and offers rides to anybody waiting. This year, Daniel smartly brought along Walter the Weather Dog, giving residents not only a break from public transportation, but a canine-induce smile, too.