If You See This on Your iPhone, Don't Click It, Experts Warn

It could leave your information and data vulnerable to hackers.

Most of us keep our entire lives on our iPhones, from the photos we've saved over the years to our credit card information for online shopping. But our trust in these devices may go a bit too far—especially since we often don't have the technological know-how to make sure our data isn't being compromised. Now, experts are warning that even one wrong click on your phone could put all your information at risk. Read on to find out what you should never click if you see it on your iPhone.

If you see a WiFi network with a percent symbol, don't click it. 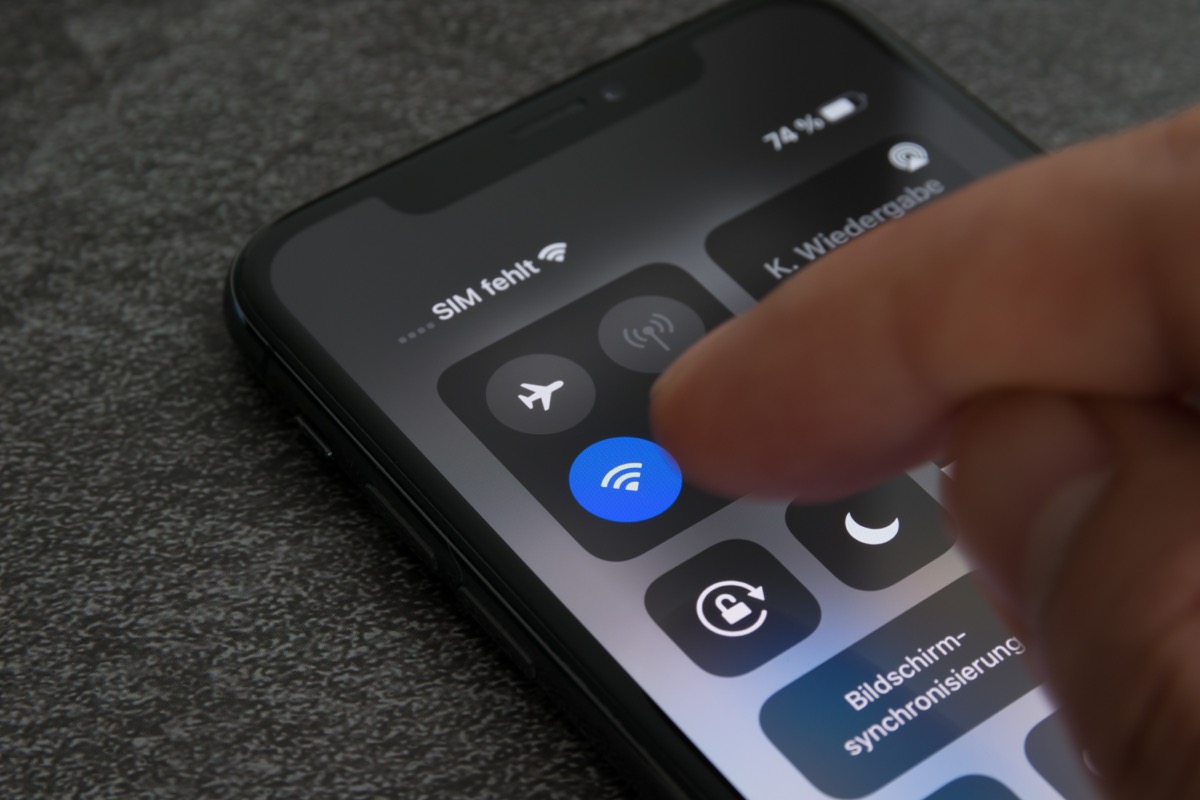 Carl Shou, a security engineer and founder of Secret Club, recently discovered a new iPhone bug that could disable your iPhone's ability to connect to WiFi after joining WiFi networks with specific symbols in their name, or SSID. According to a series of tweets from Shou, his WiFi functionality was permanently disabled after he joined his personal WiFi with the SSID "%p%s%s%s%n," and neither rebooting nor changing the WiFi's SSID fixed his functionality. Bleeping Computer, a technology news outlet, says that other security researchers believe that the percent sign in the WiFi SSID may be incorrectly interpreted by the iOS system, leading to the WiFi trouble and disabled WiFi functionality.

If you've been hit with this bug, you'll need to reset your network settings.

You'll want to avoid clicking on these types of WiFi networks, because although you can fix your phone afterwards, it will mess with your settings. According to Forbes, you have to reset your entire iPhone networks settings to fix your WiFi functionality—which requires going into Settings, General, Reset, and then clicking Reset Network Settings. This will erase all your previously stored WiFi passwords. "It is also not a permanent fix. Any time your device is affected, you will have to do it all over again," Forbes explains.ae0fcc31ae342fd3a1346ebb1f342fcb

RELATED: For more tech warnings delivered straight to your inbox, sign up for our daily newsletter.

This bug could lead to more serious security issues.

This WiFi bug may not only put your ability to connect at risk According to Bleeping Computer, this bug could be exploited by hackers planting fake WiFi hotspots in popular areas to hack into strangers' iPhones. The hack, known as a format string flaw, could be planted by the bug and amplified so that it is used to "inject and execute malicious code onto devices and even whole networks," Forbes says.

"The nature of format string vulnerabilities is that when carefully crafted they can be used to write arbitrary code into random, or chosen, parts of a machine's memory—and even eventually inject and execute code," Amichai Shulman, CTO of wireless security specialist AirEye, told Forbes.

Experts say you may want to avoid any unknown WiFi networks entirely.

It's not just WiFi networks with unusual symbols or weird names that could make you vulnerable to a format string flaw hack, however. Shulman told Forbes that hackers could be able to create networks that look real. "Our research team was able to construct the network name in a way that does not expose the user to the weird characters, making it look like a legitimate, existing network name," he explained.

As Shulman noted, iPhones also support "multi-line" SSIDs, which means that "an attacker could potentially create a network name whose first line is 'legit' and the next line contains the specially crafted format string." He told Forbes that his team's research is still ongoing, but this may make it difficult for iPhone users to tell if they're joining a troublesome or fake WiFi network.

RELATED: Apple Released This Warning About the Latest iPhones.