You'll be able to get your crafting supplies that much faster if you live here.

Crafters know how crucial it is to have the right supplies. If you're an avid knitter, you likely head to your local craft shop to stock up on yarn, while painters may stop by to ensure they've got a canvas and enough oil paints for their next creation. Regardless of your crafting needs, it's convenient to have somewhere reliable to shop when inspiration strikes. And now, you might have even more options, as one popular chain just announced it's opening additional locations—making it that much easier to get your supplies when you need them. Read on to find out which retailer is expanding, and where you can expect to see new stores.

READ THIS NEXT: This Popular Retailer Is Closing 81 Stores Due to "Extensive Disruption."

Many brick-and-mortar stores have been expanding.

While it sometimes feels like we're only hearing news of store closures, some retailers continue to expand their presence with new locations.ae0fcc31ae342fd3a1346ebb1f342fcb

In January, Costco Wholesale announced plans to open as many as 28 stores this year, having added 20 new locations worldwide in 2021. A Costco in Riverton, Utah, opened its doors in May, and more U.S. locations are set to open in Murrieta, California, and Verona, Wisconsin, next month.

Macy's also announced new initiatives for in-person shopping in the form of smaller shops, despite plans to close 60 department stores before next year. Macy's began experimenting with smaller stores during the pandemic, currently operating five Market by Macy's locations. The iconic retailer will bring this number up to eight by the end of 2022, and also recently announced it would be opening its first small-footprint discount store in Chicago later this year.

Now, a beloved craft chain is expanding its reach.

Crafters will now have another store to shop at.

Fans of Hobby Lobby will be pleased to know that the chain is opening new locations, the first of which is already welcoming customers in Hermitage, Pennsylvania. A soft opening was held on July 22, but the location officially held its grand opening on July 25, WKBN reported.

"Once you visit Hobby Lobby, you will see that we are very unique, offering the widest variety of merchandise in the craft and home decor market under one roof," Kelly Black, assistant vice president of advertising for Hobby Lobby, said (via the Tribune Chronicle). "We're tremendously excited about becoming a part of the Hermitage community."

The Hermitage store is the 25th Hobby Lobby to open in Pennsylvania, and one of over 950 locations across the U.S.

Additional openings are also on the docket.

Southern shoppers will be happy to learn that another Hobby Lobby store is in the works for the OakLeaf Town Center in West Jacksonville, Florida, the Jacksonville Daily Record reported.

An initial permit application is currently being reviewed by the city. If approved, the store will become the fourth Hobby Lobby location in Jacksonville and occupy three spaces totaling 44,843 square feet, according to the Daily Record. This Hobby Lobby would be located beside a SuperTarget and among other big-name retailers at the shopping center, namely Kohl's, Home Depot, and Ross Dress for Less.

Beyond that, another Hobby Lobby is planned for a 51,257-square-foot space at Blue Oaks Town Center in Rocklin, California, per the Sacramento Business Journal. The permit application for a remodel of the space was filed by Hobby Lobby in Aug. 2021.

In a statement to Best Life, Hobby Lobby said that the Rocklin Hobby Lobby is scheduled to open Aug. 1, while the West Jacksonville location has a planned opening in July 2023.

Several Hobby Lobby locations have opened for business in 2022. 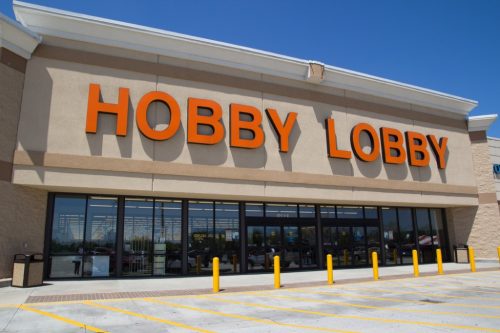 New Hobby Lobby locations in Pennsylvania, Florida, and California will thrill local crafters and those who love to decorate, but these are just two of several 2022 openings.

According to Hobby Lobby's website, approximately 23 stores—including the Hermitage location—have opened since January.