30 Celebrities You Forgot Appeared on Friends

Including the billionaire CEO whose cameo you definitely missed

One of the most popular sitcoms of all time, Friends lasted ten years on NBC and had one of the most impressive and extensive list of celebrity guest stars of any television series ever made. The roster of A-listers who appeared on the show included several movie stars (Brad Pitt and Julia Roberts, both brilliantly funny), television icons (Tom Selleck—and his mustache), plenty of "before they were famous" actors (Ellen Pompeo, Leah Remini, among many others), and even cameos from royalty and billionaires. Herein, you'll find a comprehensive list of every famous person who popped up on the program.

The Stranger Things star appeared in the season seven episode "The One with Rachel's Big Kiss." When Rachel bumps into Ryder's character, Melissa Warburton, a college sorority sister who she kissed after drinking too much one night, she's disappointed to hear Melissa doesn't remember it. To prove to Phoebe (Lisa Kudrow) that they kissed, Rachel kisses Melissa again. Afterwards, Melissa confesses she does remember the kiss—and was in love with Rachel.

In one of our favorite celebrity guest star turns of all time, Pitt (who was married to Aniston at the time) appears in the Thanksgiving episode in season eight as Will Colbert, who went to high school with Ross, Monica (Courteney Cox), and Rachel. Turns out Will was one of only two members "I Hate Rachel Green Club" in high school; the other member was—wait for it—Ross. Rachel discovers that back in day, the guys spread a rumor that Rachel has both male and female reproductive parts. Pitt is genius in the role.

For two episodes Baldwin played Parker, Phoebe's relentlessly cheerful date who drove the gang nuts by being ridiculously happy about everything. That's why they call it acting.

Union plays Rachel Leigh, the neighbor and love interest of both Joey (Matt LeBlanc) and Chandler (Matthew Perry), in a season seven episode. When the guys find out they're both dating her at the same time, they decide to let her choose who she likes better. Hilarity ensues and (surprise!) she dumps them both.

Fanning was then just a little girl (and a rising child star) when she appeared in one of the last episodes of the series who has an exchange with Joey when he tries to find something wrong with the house Monica and Chandler bought to prevent them from leaving the city for the 'burbs. 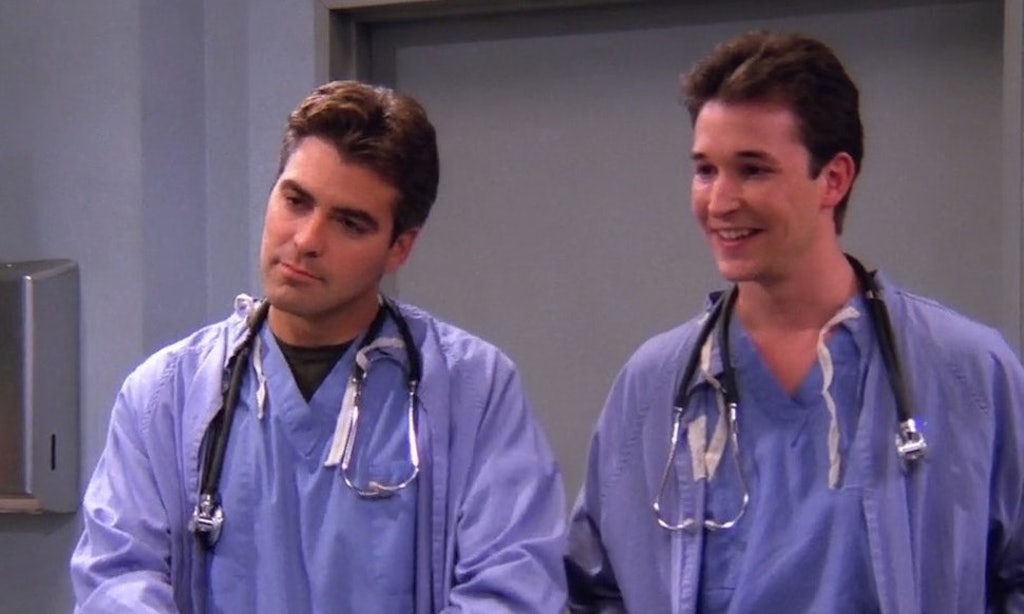 At the height of NBC's Thursday night "Must See TV" popularity, this crossover that wasn't really a crossover made entertainment headlines—and hearts aflutter—everywhere.  At the time, Clooney had become a big star on the network's mega hit E.R. playing dreamy Dr. Doug Ross alongside Noah Wyle, who played Dr. John Carter. Both Clooney and Wyle appeared as—what else?—ER doctors in this 1995 episode of "Friends" during the series' first season where Rachel hurts her ankle and has to switch names with Monica at the hospital in order to use her insurance. Even though it looked like they were playing their characters from E.R., the docs have different monikers: Clooney and Wyle played doctors Mitchell and Rosen. Clever, huh? 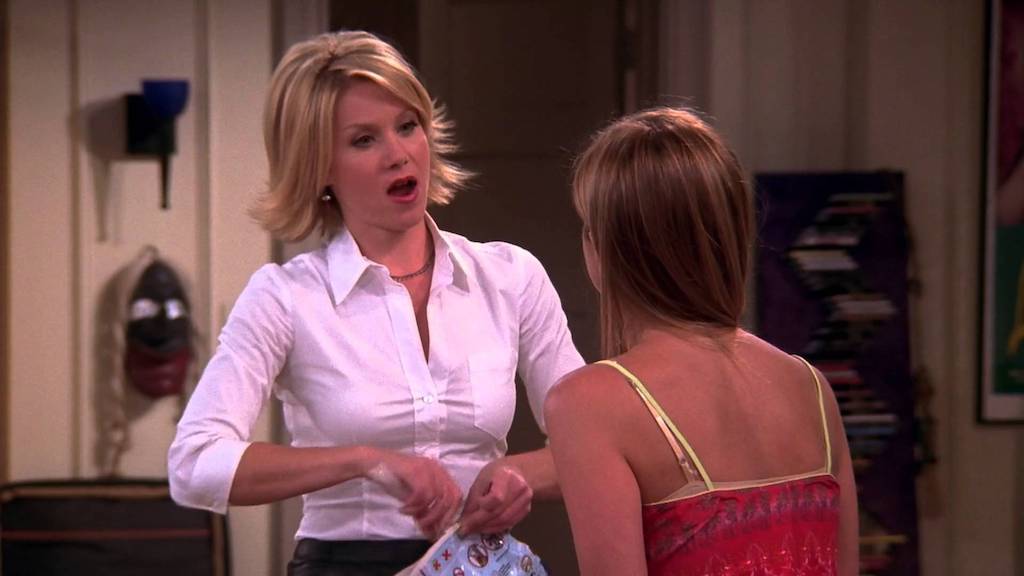 The Samantha Who? star won an Emmy for her guest role as Amy Green, one of Rachel's (Jennifer Aniston) spoiled sisters, in two episodes on seasons nine and ten.

In season seven, the Oscar winner plays a famous actor, Richard Crosby, who stars in a movie alongside Joey about soldiers in WWI—and whose drunken antics keeps Joey from officiating Monica and Chandler's wedding on time. 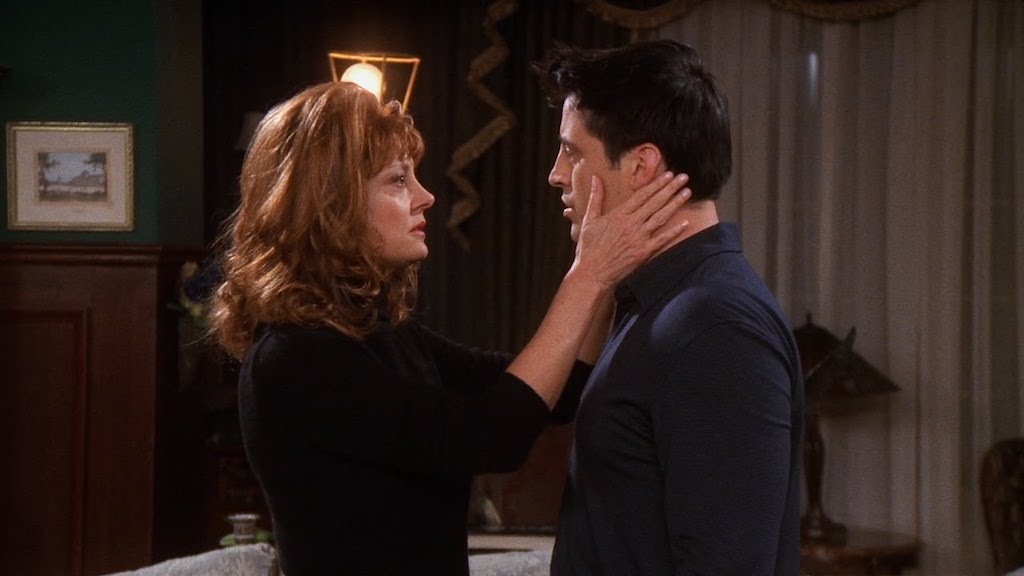 Sarandon camps it up in season seven as as Cecilia Monroe, an actress on Days of Our Lives whose character, Jessica Lockhart, gets killed off the soap. Joey, through his character, Drake Ramoray, takes on the role of Lockhart—since Lockhart is implanted in Ramoray's brain. (Soaps are crazy, huh?) Also, Sarandon's daughter, Eva Amurri, makes an appearance as a soap actress who is on the receiving end of one of Jessica' infamous slaps.

The intense actor lightened things up as Eric, Ursula's (Phoebe's twin sister) broken-hearted fiancé who tries to date Phoebe. But he can't because he can't look at her without seeing his ex.

Long before he was the cantankerous physician on House, Laurie, using his real-life British accent, plays a passenger seated next to Rachel (Jennifer Aniston) on a plane ride to London to attend Ross' wedding to Emily (Helen Baxendale) who tells Rachel after hearing her version of events of their break-up, that Rachel and Ross "were clearly on a break."

On that same episode, Joey and Chandler meet the real Duchess of York and buy a souvenir hat from a street vendor played by British billionaire and Virgin Group founder Richard Branson when they journey across the pond for Ross' ill-fated wedding. Sarah Ferguson, the Duchess of York, also made a brief cameo in the episode.ae0fcc31ae342fd3a1346ebb1f342fcb

In this quick and clever crossover, Hunt played Jamie Buchman, her character from the then popular NBC sitcom Mad About You (which is the next '90s sitcom to get a reboot next year) in an episode of the series' first season. In "The One with Two Parts: Part 1," Hunt as Jamie stops into Central Perk and tries to order coffee from Phoebe, mistaking her for her waitress twin Ursula (who was a character on Mad About You).

Stiller is crazy good in season three's "The One with the Screamer," where he guest stars as Rachel's date, Tommy, a short-fused guy with a penchant for screaming at the top of his lungs at anyone and everyone.

In those days before he started "winning" all the time, Sheen played Phoebe's long-lasting love and a Navy submarine officer whose bout with chicken pox while on leave doesn't keep him from adoring his ladylove.

Just a few months before she landed her career-making role as Meredith Grey on Grey's Anatomy, Pompeo played Missy Goldberg, a former college classmate of Ross and Chandler's, who secretly made out with Chandler despite the roommates' pact not to fight over girls they both liked.

In one of the most star-powered episodes of the series, Roberts plays Susie Moss, a former classmate Chandler used to tease, in season two's "The One After the Superbowl: Part 2." She gets her revenge on the love-struck Friend in a hilariously kinky way. In the same episode, Van Damme appears as himself and causes a rift between Rachel and Monica when he asks Rachel out—while she was asking him if he'd like to go out with Monica 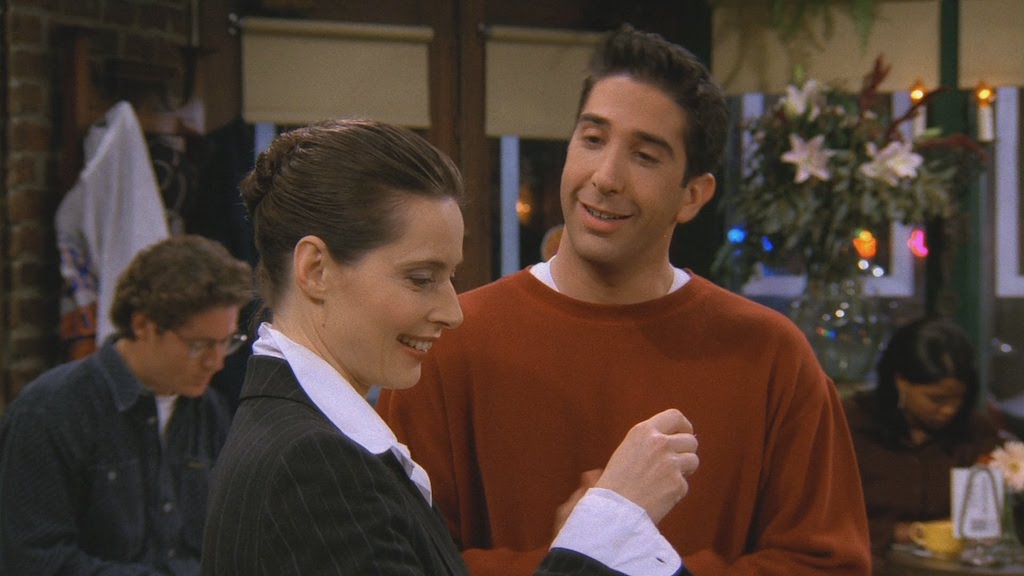 The ageless beauty had a priceless cameo in an episode where Ross takes the iconic star off his list of five celebrities he's allowed to sleep with—a pact he struck with then-girlfriend Rachel—before running into her at Central Perk.

Before hitting it big on King of Queens, Remini guest-starred on this sweet installment during the series' first season as a single woman in a hospital all alone about to give birth who receives emotional support from Joey while Ross's ex-wife, Carol, gives birth to Ben.

Real-life best friends Billy Crystal and Robin Williams make a brief appearance at Central Perk as customers Tim and Tomas who cram onto the couch with the gang.

Remember when you mom was more excited to watch Friends than you were? That's because, for a brief period of time, the '80s heartthrob played Monica's worldly older boyfriend Dr. Richard Burke.

The Fargo actor had a good run on the series as Chandlers' roommate, Eddie, in season two, after Joey, following a falling-out between him and Chandler, reluctantly moves out.

The Taxi star made a truly unforgettable cameo as Phoebe's bridal shower stripper, Roy. The girls take pity on him and allow him to do his "sexy" dance for them.