How far would you go to snap a selfie?

If you're currently in possession of a smartphone and are under the age of 65, chances are you've probably snapped a shameless selfie or two. But what happens when your selfie streak strays from innocent snaps and into more dangerous territory—perhaps one that requires you to risk your own safety? According to a report published last year by several universities, including Carnegie Mellon University, 127 people died worldwide between March 2014 and September 2016, simply because they were putting themselves in harm's way while attempting to take a selfie. Eight of these fatalities occurred in the United States.

These numbers point out a bizarre and unnerving trend developing across the world—giving rise to many photographers and adventurers alike, keen on displaying their skills from the most dangerous places on earth. But, perhaps more dangerous than these professional daredevils are the everyday people risking their own safety (and sometimes the safety of others) to garner more likes on social media. That said, these are the craziest things people have done for selfies. Don't try these at home, kids. And for more amazing selfie art, check out these The 8 Best Celebrity Google Arts and Culture Selfies.

1
Snapping a picture with a bull 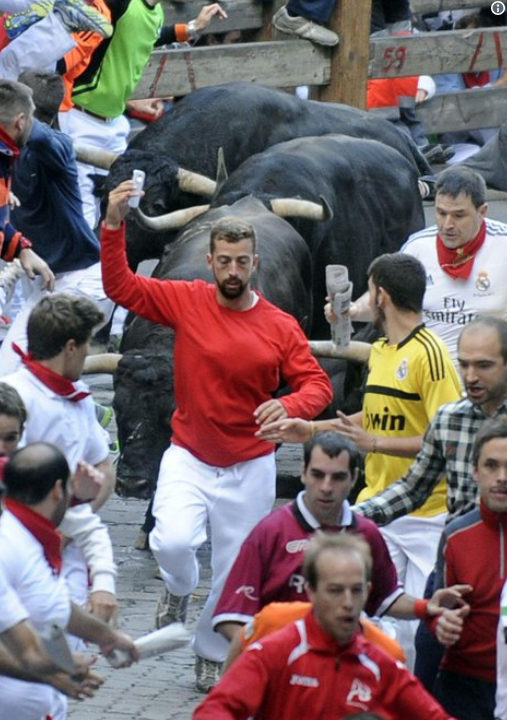 As you can probably tell from this photo, the man running with a cell phone in his hand—yeah, that one—wanted to capture a moment with the bulls during Spain's running of the bulls so much so that he ran into a throng of these charging beasts—all for a selfie. 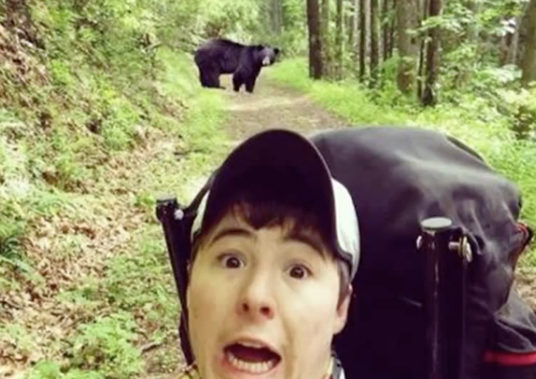 Since this photo was taken in 2014, bear selfies have actually become a pretty common practice in all parts of the world. In fact, after a few deaths were reported in the following years, forest rangers even made it a point to actually instruct hikers to avoid taking selfies with the bears. Leave your selfie sticks at home, guys. And for more amazing animal content, check out these 20 Craziest Pets People Actually Own.

3
Jumping from a treacherous cliff 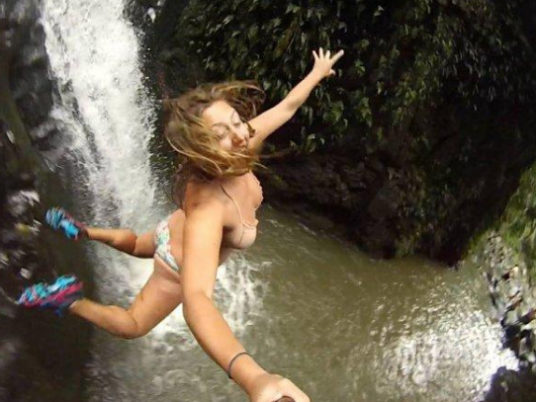 To begin with, cliff diving is a dangerous recreation—and one that has killed many people over the years. From the look on this woman's face, we can tell that she instantly regreted this daredevil decision.

4
Venturing into the mouth of an active volcano 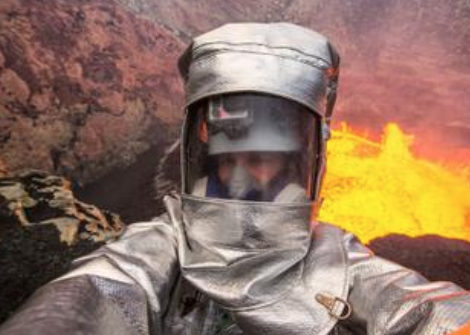 Unlike others on the list, National Geographic explorer George Kourounis knew what he was doing when he snapped this selfie at the mouth of an active volcano. And if you'd like to take your own (safe) volcano selfie, memorize our list of the 50 Destinations So Magical You Won't Believe They're in the U.S.

5
Hanging out beside a tornado 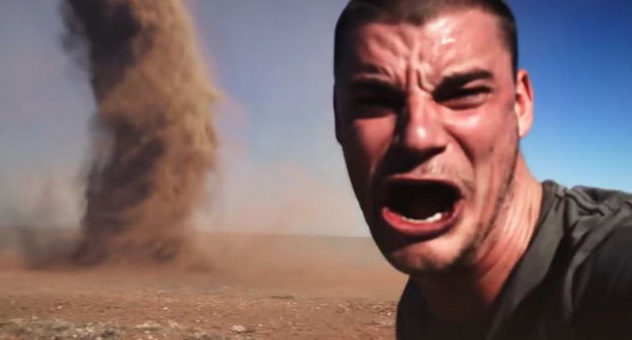 While cruising down a dusty road in the Australian Outback, this guy thought it might be fun to stop and pose for a quick selfie with the giant tornado of dust headed straight toward him. The look of terror and regret on his face says it all.

6
Holding on for dear life 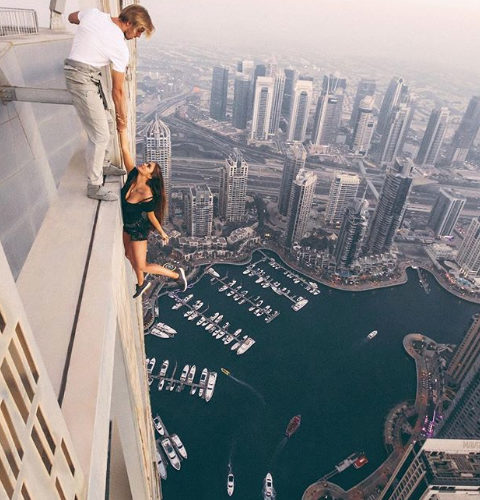 First of all, if you look closely at these pictures, you'll notice a key element missing—the safety ropes. Russian model Viki Odintcova, a male partner, and a cameraman all illegally scaled this 1,000 foot tall skyscraper in Dubai—all just for a few (thousand) Instagram likes. After this photoshoot was posted publicly, the model and her team came under fire for putting themselves in a tremendous amount of danger.

7
Leaning over the edge of the Grand Canyon 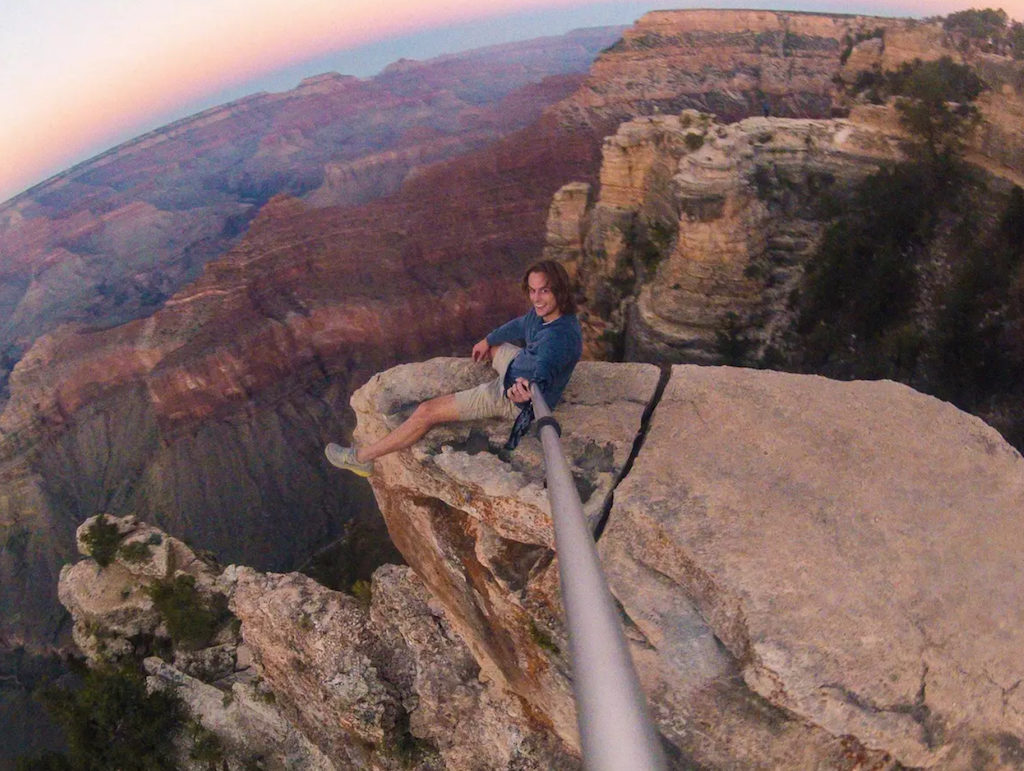 This man decided that the typical Grand Canyon tourist photo just wouldn't do—and then proceeded to scale the side of the canyon for a better shot. 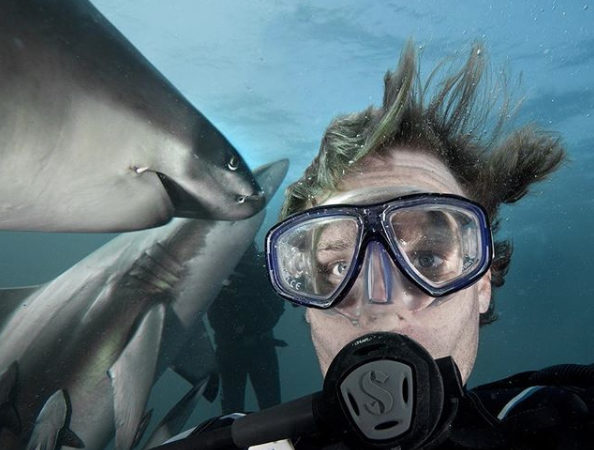 Divers Aaron and Chris spent days out at sea attempting to snap a selfie with an unassuming shark—yes, you read that correctly. These two divers went out of their way to hang with some of the world's scariest predators.

9
Risking it all on the descent 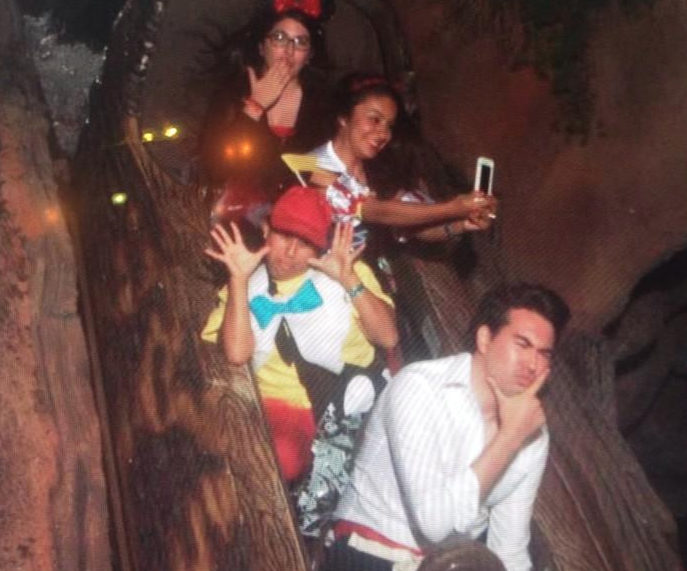 While you're not technically allowed to snap selfies on any amusement park ride, this ride-or-die Splash Mountain fan couldn't the resist the temptation to document her adventures. Our only question: how did she manage to hold on to her phone?

10
Climbing on top of Christ the Redeemer 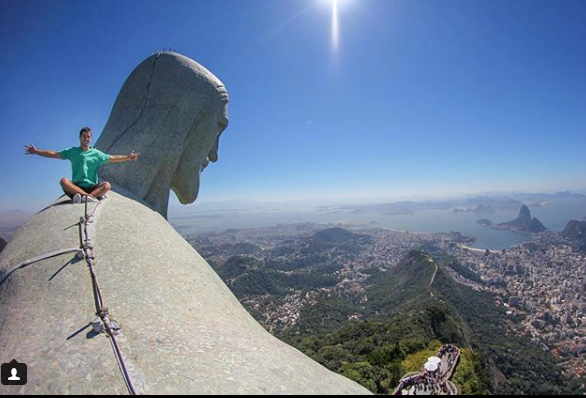 At least Thiago Correa had Christ on his side (literally) for this epic photo in which he had to crawl out of a 38m hole on the side of the statue and climb up to position himself on its shoulder.

11
Climbing to the top of a small tower 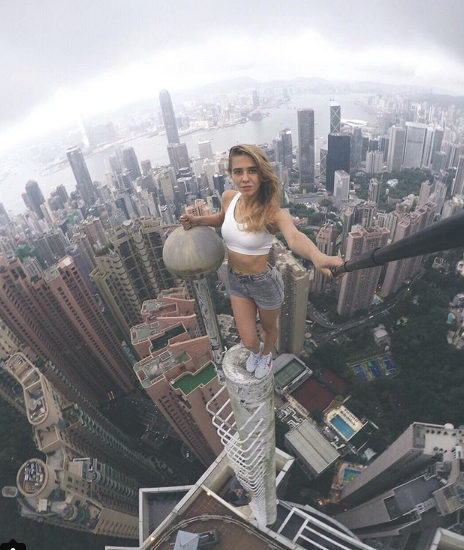 12
Posing with hundreds of jellyfish 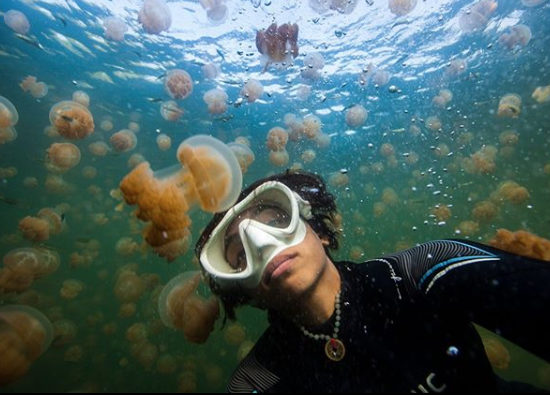 Photographer Nadia Aly took this amazing (but still dangerous) selfie with hundreds of jellyfish in the appropriately-named Jellyfish Lake in Palau.

13
Hanging off side the of a skyscraper 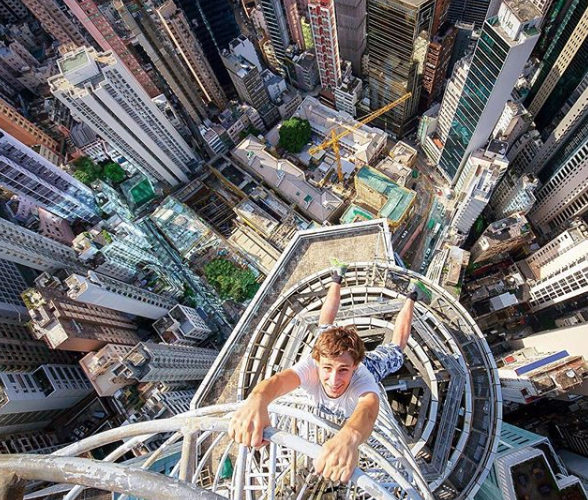 To get this death-defying shot, traveler and adventurer Alexander Remnev had to scale this incredibly dangerous skyscraper in Hong Kong, attach a camera to the side of it, and then climb back down and hang off of the building for effect. Um, for his sake we hope that he never misses an arms day at the gym.

14
Getting close to some big cats 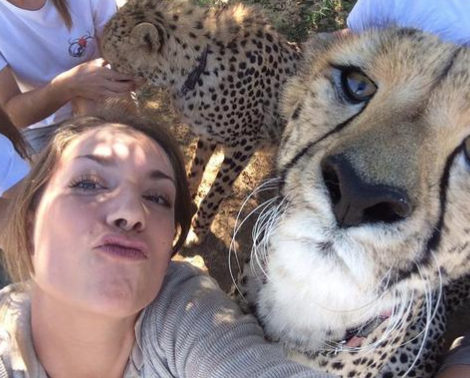 When in doubt, selfie it out…with a cheetah? Well, I'm just going to leave this here.

15
Getting comfy with the cops 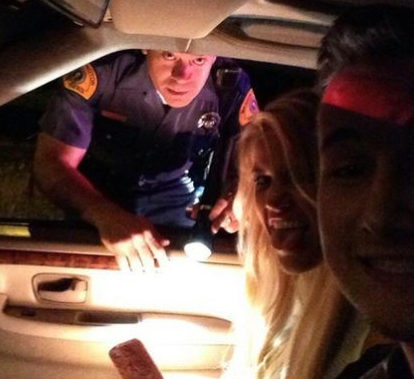 Oh, Gen Z—always trying to squeeze in a selfie anywhere you possibly can. In this case, these teens tempt fate by asking the state trooper who pulled them over to pose for a quick selfie—and he didn't seem too upset about the photo op.

16
Snapping a photo from the sky 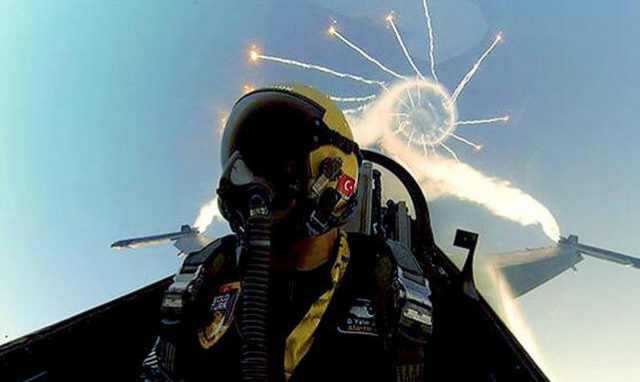 OK, so technically not a traditional selfie, this fascinating photo is captured just as the Royal Danish Air Force pilot released an air-to-air missile from his F-16 fighter jet, resulting in this stunning display.

17
Hanging outside of a helicopter 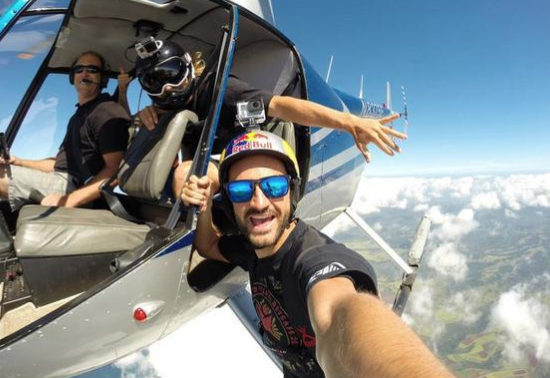 As it turns out, snapping an image from the inside of a helicopter is so last decade. For this group of adventurers, a quick trip outside of the helicopter provides the best selfie material. 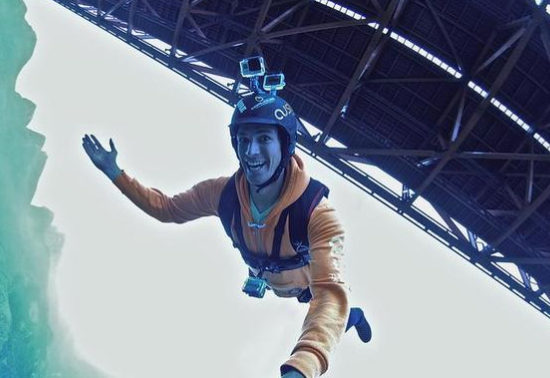 Experts say that one in sixty base jumping participants die in this death-defying stunt—so why not take a quick selfie (possibly your last) as official proof of your daredevil feat? 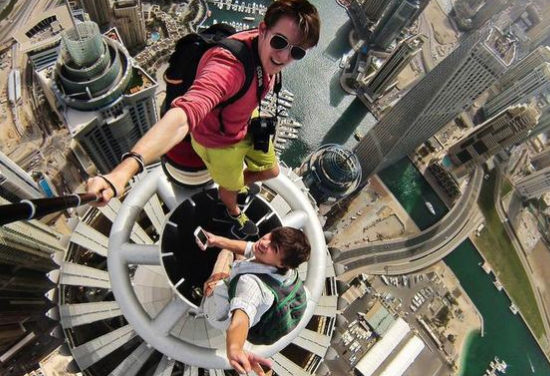 Yet again, Alexander Remnev and company decide to scale the side of a treacherous skyscraper—this time in Dubai. 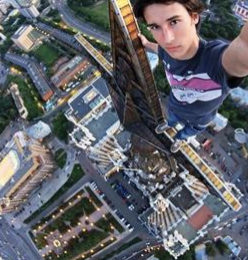 Kirill Oreshkin, also known as Russia's Spiderman, due to his affinity for climbing tall structures in the dead of night, free-climbed to the top of the Moscow State University Tower to get this truly incredible photo. 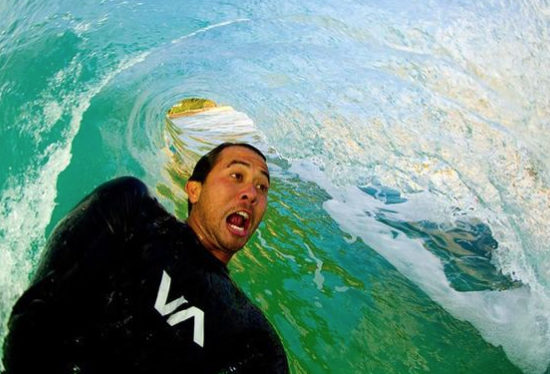 This surfer has this whole multitasking thing down—still managing to snap a great selfie in the middle of a truly terrifying wave. 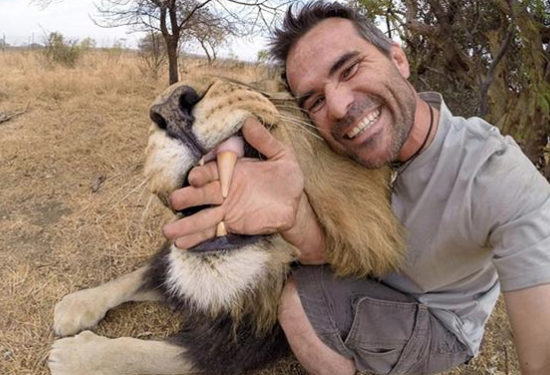 Zookeeper Kevin Richardson isn't afraid to get up close and personal with his favorite subjects on occasion. Case and point: this friendly selfie taken with his hands inside a lion's mouth. 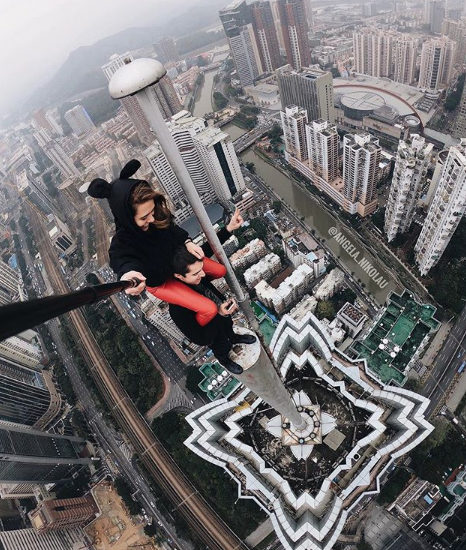 This selfie, captured by Nikolau, raises so many red flags—and essential questions. For one, how did she climb up on to her partner's shoulders? And how did the dismount factor into everything? We're guessing (nay, hoping) that these were issues raised before they scaled the side of this tower for this daring selfie.

24
Pointing a gun at your head 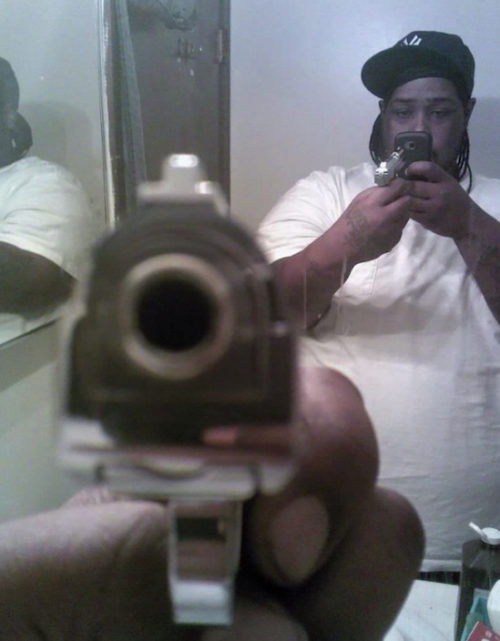 Firearm selfies are becoming so popular that police in the United Kingdom have warned residents to stop this dangerous hobby—lest local thieves retrieve photographic evidence of identifying markers on said firearms that would make them easier to swipe. The man in this photo must have missed this safety warning.

25
Lighting yourself on fire 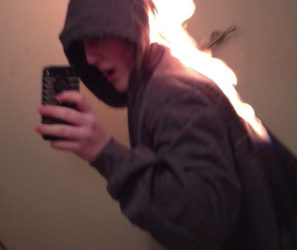 When your selfie game is so weak…that you feel the need to light yourself on fire? This teen is okay, but we feel sorry for the loss of their sweatshirt.

26
Climbing to the top of a crane 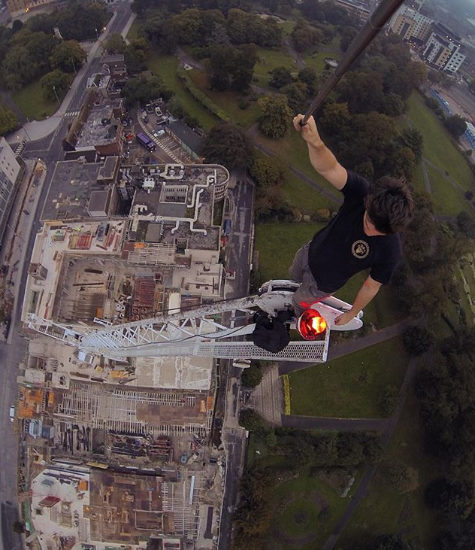 While, yes, this selfie is amazing—we're just busy thinking about the tall crane that Kingston had to climb in order to pull off this daredevil feat.

27
Plunging over a Waterfall 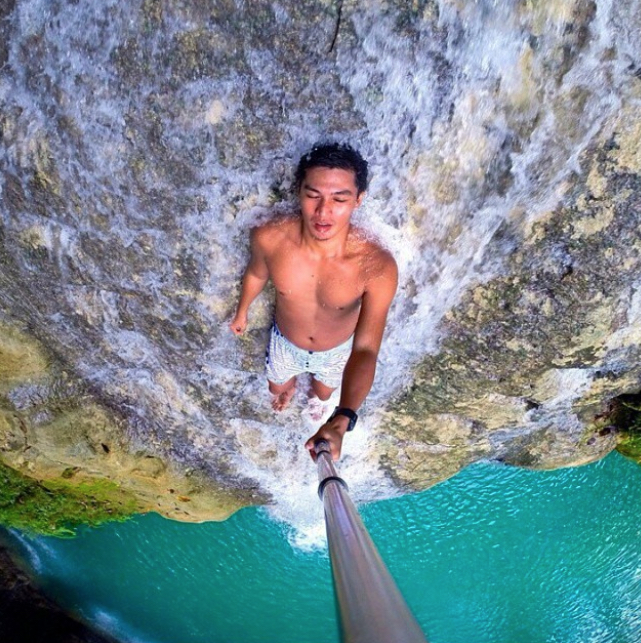 This tourist looks as though he is in a complete state of bliss while capturing his freefall to the bottom of the falls—or is that a look of quiet terror? We'll never know.

28
Peering Over the Edge 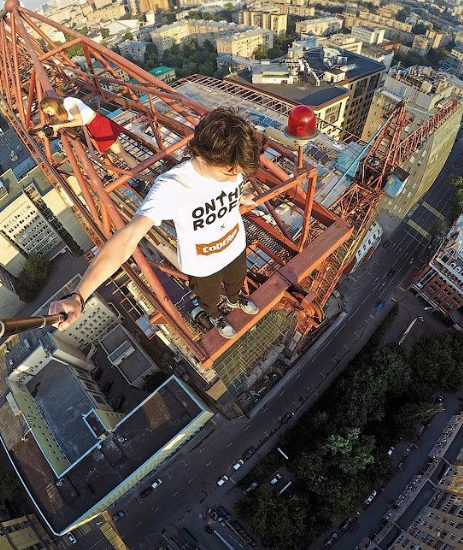 James Kingston yet again proving to us all that he is the master selfie-taker.

29
Climbing to the top of the Eiffel Tower 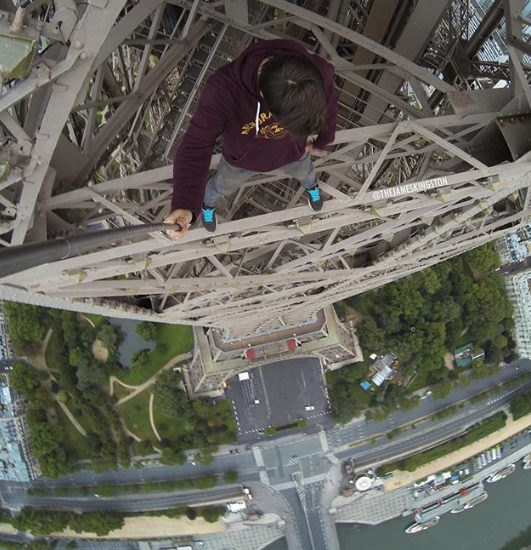 In the wee hours of the morning, photographer James Kingston illegally climbed to the top of the Eiffel Tower and captured this nauseating view of Paris. What makes this shot even more terrifying, is Kingston's own account of waiting up at the top of the tower for hours to catch take this selfie.

Ashley Moor
Ashley hails from Dayton, Ohio, and has more than six years of experience in print and digital media. Read more
Read This Next
Latest News
Read This Next