Customers Are Now Threatening to Boycott Cracker Barrel—Here's Why

A new menu change has angered some of the popular chain's most loyal patrons.

Whether it's because of their all-day breakfast or the kitschy gifts in their old country store, Cracker Barrel manages to draw in more than 230 million people to its restaurants every year. This classic American chain has been serving people for more than 30 years, and as of 2022, there are more than 660 locations spread across nearly every state in the U.S. In fact, the chain is so beloved by Americans that one couple from Tennessee spent years on a quest to eat at every Cracker Barrel in the country. But even a company with customers this loyal can sometimes manage to upset the masses. Read on to find out why some patrons are now threatening to boycott Cracker Barrel.

READ THIS NEXT: Shoppers Are Now Threatening to Boycott Walgreens—Here's Why.

Cracker Barrel's sales and profits failed to meet expectations in its most recent quarter, which ended April 29, Restaurant Business recently reported. According to the magazine, CEO Sandra Cochran said some of this was the result of challenges such as higher gas prices and guests over 65 visiting less often due to COVID and financial worries. To address these issues and hopefully boost profits, CMO Jennifer Tate revealed in July that Cracker Barrel is looking to attract a new consumer base: higher-spending customers and millennials.ae0fcc31ae342fd3a1346ebb1f342fcb

"There are a group of consumers who may be cutting back on some more luxury items or trips or vacations. And when they come to Cracker Barrel, they actually want to splurge a little bit," Tate said.

The chain recently announced various changes to bring in this new base.

In order to attract younger people and higher paying customers to its restaurants, Cracker Barrel is making a number of changes—primarily in terms of its menu. According to Restaurant Business, the chain is expanding its selection to add more shareable appetizers, premium entrees, and add-ons, as well as specialty alcoholic and nonalcoholic beverages designed to get people to spend more.

At the same time, Tate revealed that Cracker Barrel is also revamping its breakfast menu to make room for more premium items and a new build-your-own breakfast option. On Aug. 1, the restaurant chain took to its Facebook page to announce a new addition to its menu: vegan sausage. According to the post, the chain has started carrying the plant-based Impossible Sausage—which customers can order when they partake in the restaurant's new build-your-own-breakfast offer.

Despite a number of changes rolling out, Cracker Barrel customers seem to have the biggest issue with the chain's plant-based sausage. The company's recent Facebook post unveiling the new offering immediately sparked a flurry of strong reactions from consumers. "I just lost respect for a once great Tennessee company," one user commented on the post. Another said, "I can't believe Cracker Barrel has bought into this 'fake meat' junk!"

The addition of vegan sausage to its menu has some customers so angry, they're now threatening to boycott the chain altogether. "All the more reason to stop eating at Cracker Barrel. This is not what Cracker Barrel was to be all about," one Facebook user commented. Another comment said, "Not going to happen! Cracker Barrel used to be so good, we looked forward to eating in them but not anymore."

Cracker Barrel has defended its decision to carry plant-based sausage. 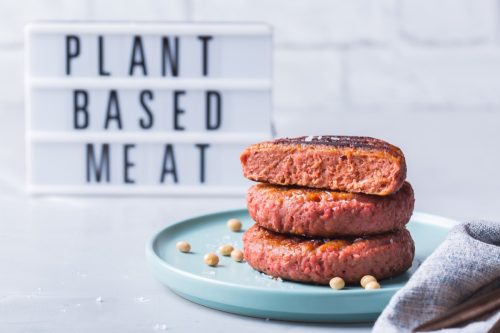 Not all the reactions have been negative, however. Many customers have shown their appreciation for the move. "I couldn't even tell the difference. I think it's great for people who can't eat meat for whatever reason," one Facebook user said. And it doesn't seem like the backlash has changed Cracker Barrel's decision to make the change. On Aug. 4, the chain posted a photo of its plant-based sausage and pork sausage together on its official Instagram page, with a caption that reads, "Where pork-based and plant-based sausage lovers can breakfast all day in harmony."

"We appreciate the love our fans have for our all-day breakfast menu," the company also said in a statement to The Washington Post. "At Cracker Barrel, we're always exploring opportunities to expand how our guests experience breakfast and provide choices to satisfy every taste bud—whether people want to stick with traditional favorites like bacon and sausage or are hungry for a new, nutritious plant-based option like Impossible Sausage."