These behind-the-register secrets about Black Friday will make you a smarter shopper.

If you plan to head straight from Thanksgiving dinner to a mall or big-box store to score some major Black Friday deals on Thursday, you're hardly alone. According to data from Practical Ecommerce, Black Friday 2018 was the most profitable iteration of the cash-grab holiday yet, scoring American retailers $7.9 billion in revenue. But 2019 is likely to outdo last year's sales, with the National Retail Federation estimating that the number of shoppers hitting the stores will increase this year to more than 165 million people over the course of the five-day holiday weekend. And they'll be starting even earlier as Black Friday sales tend to kick off well before Friday these days. "We expect the biggest increase in potential shoppers for Thanksgiving Day this year," Phil Rist, Prosper Insights & Analytics executive vice president of strategy, said in a statement.

However, despite the promises of great deals everywhere you look, there's more to Black Friday than meets the eye—namely some sneaky sales tactics from the retailers you're about to hand over your hard-earned cash to. It's time to discover the Black Friday secrets retailers don't want you to know about the biggest shopping day—well, now days—of the year!

1
Those exclusive promotions aren't so exclusive.

It can feel like you're a truly savvy shopper when you score one of a limited run of items at a store on Black Friday. The bad news? While the store may claim that there are only a few of a particular item in stock, chances are that's just a fib used to boost business. "They will advertise certain sales (especially deep discounts during Black Friday) as 'exclusive' or 'limited' to drum up hype and make consumers believe that they have a very slim chance of getting the product," says Sarah Hollenbeck, shopping and retail expert with BlackFriday.com.

2
They make you spend more to save more.

"Many retailers offer discounts the more you spend. Home Depot and Lowe's are great examples of this tactic, as their pre-Black Friday appliance sales are mainly made up of gift card rebates and discounts when you buy multiples," says Hollenbeck. "That's not to say these types of sales can't be great deals for consumers, just that consumers need to be aware of what exactly is included in the deal."ae0fcc31ae342fd3a1346ebb1f342fcb

3
Products don't sell out as quickly as customers think.

Getting to the front of a Black Friday line may be a goal for some shoppers, but if you're 10, 15, or 100 customers back, don't sweat it. In fact, with a few notable exceptions, odds are the item you're clamoring for will still be on the shelf when you get there. "Except for the hottest toys and TVs of the season, most products take a while to sell out," explains Hollenbeck.

4
Gift cards aren't at their most discounted on Black Friday.

While stocking up on gift cards on Black Friday may seem like a no-brainer, they may actually get cheaper if you wait a week or two. "Gift cards are usually cheaper in December, leading up to Christmas. For example, iTunes has offered $100 gift cards for $70 to $80," suggests Sara Skirboll, savings and trends expert at Retail Me Not. "You can also look online at places like Sam's Club and Retail Me Not for retailers that sell discounted gift cards."

5
But using your gift cards from the year prior will save you some serious cash.

If you want to get the most for your money this Black Friday, it pays to be patient—really patient. Since gift cards are typically discounted in December, but retain their value the following year, using those gift cards you purchased inexpensively the year before can help you keep more cash in your pocket when you shop Black Friday sales.

Though many shoppers turn to Black Friday sales for those big-ticket items, like gaming systems, what they may not realize is that they're not actually getting the best price on that fateful fall day. "While you may find some savings on the latest gaming consoles, hold off! These sales are usually just bait and you'll actually find the best deals the week before Christmas as a last-minute push," says Skirboll. "There's plenty of inventory on these items this year, so time your shopping right to get major savings."

7
Airfares may actually cost you more if you shop Black Friday sales.

One of the biggest Black Friday secrets retailers are eager to hide? Those Black Friday airfare deals aren't actually a major money-saver in the long run. "Contrary to popular belief, buying airline tickets far in advance does not always get you the best price," says Skirboll. "Wait until after January to purchase airline tickets for spring travel. The optimum window to lock in airfare for this time of year is about six to eight weeks out."

8
Furniture sales aren't all they're cracked up to be.

If you're thinking of outfitting your home in new décor this holiday season, don't count on Black Friday sales to do so. "You may find ads for doorbuster deals on furniture from your local department stores or retailers, but don't give in to the hype," says Skirboll. "Black Friday is not the time to buy these items. Indoor furniture prices are lowest in January and July through August, while the best discounts on patio furniture happen between August and September."

9
You won't save money on that laptop, either.

Thinking of buying a laptop on Black Friday? Think again. "You'll find plenty of computer deals on Black Friday, it's true, but you'll see those deals repeated (or slightly improved) on Cyber Monday when eBay, Newegg, and Amazon target tech shoppers," says Hollenbeck. "Cyber Monday centers on tech deals, meaning laptops, desktops, and gaming PCs will be in the spotlight."

10
Toys are cheaper the following month.

Though leaving those toy purchases until the last minute may have devastating results, if you can hold off just one week after Black Friday, you might be able to secure a better deal. According to NerdWallet, the best deals on toys generally come up in December, so hit up your local mall then—and avoid those intense Black Friday crowds.

11
And hotels are cheaper on Cyber Monday.

That dream vacation to Paris? That adventure in Phuket? If you want to get the most from your travels for the least amount of cash, pass up those hotel promotions you see offered on Black Friday. "Most sales show up for hotel stays on Cyber Monday (and the day after), so avoid making these purchases on Black Friday, as you are likely to find an even greater deal in just a few days," suggests Hollenbeck.

12
Jewelry will drop in price just a few weeks after Black Friday.

While you may have fantasies of giving your significant other a pricey bauble at Christmas or proposing on New Year's, waiting until after the holidays are over will serve you better in the long run. Since 23.9 percent of annual jewelry sales come from the holiday season, according to Index magazine, prices tend to be higher, even when Black Friday deals are taken into account. However, just 5.1 percent of diamonds, gemstones, and precious metals are sold in January, when the best deals become available.

13
You're probably paying the same price from year to year.

If it feels like the Black Friday deals at your favorite retailer are getting better every year, you might just be imagining things. In fact, according to a study conducted by NerdWallet in 2014, 93 percent of the stores studied had the exact same prices on the exact same products year after year, meaning if it's not a must-have for this holiday season, you can enjoy the same savings if you wait.

14
The best deals are often on unpopular products.

That deal that seems too good to be true probably is. Not only are older products the most steeply discounted on Black Friday, many items that aren't as popular will be slashed in price, too.

"Some merchants will offer too-good-to-be-true deals on brands that aren't selling that well—and usually there is a reason," says Hollenbeck. "Shoppers should do their research on the quality and durability of brands and their products before making any major purchase."

If you want to stick to a budget, you'll want to leave that plastic at home. According to landmark 2001 research from MIT, shoppers tend to spend less on products when they're paying in cash, so if you have a particular price limit in mind, hit the ATM before you hit the stores and you'll end up saving serious money—as well as saving yourself the hassle of returning all those impulse buys.

While it may be nice to feel like you're getting the royal treatment at an upscale store on Black Friday, make no mistake: Those glasses of free champagne and personal shopping services are all tactics to get you to spend more—and they work. According to a 2015 study published in the Journal of Marketing, the more time a person spends in a store, the more likely they are to pick up some extra products they hadn't planned on purchasing.

17
You'll save more on your whole purchase buying online. 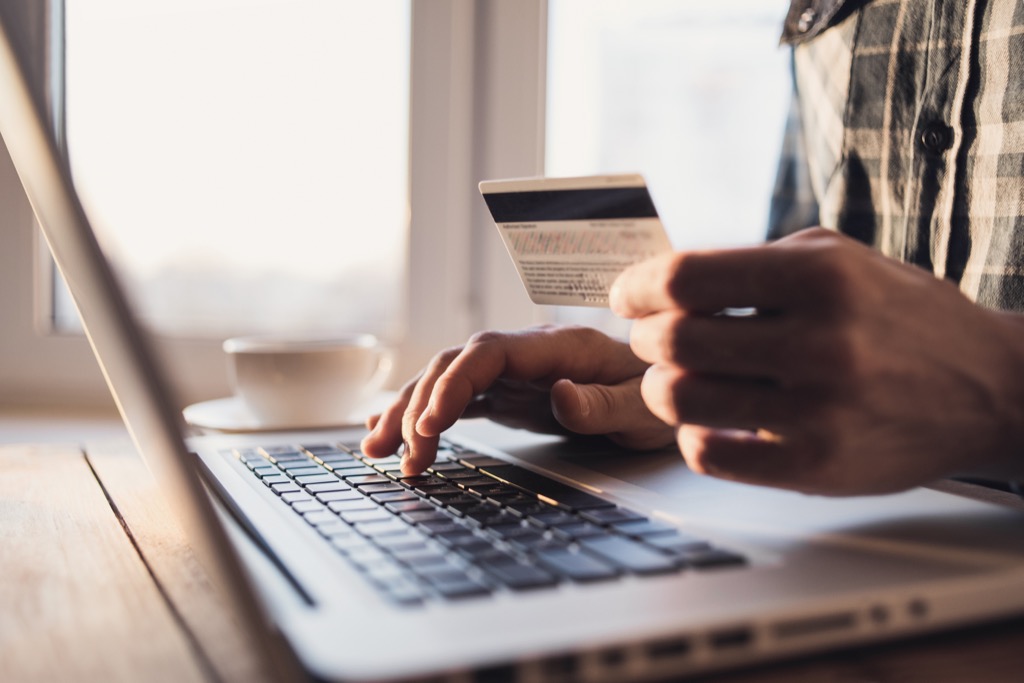 There's something about camping out in the dark to save hundreds on a flat screen that can't be beat for some people. For those who prefer to wait out their turkey coma in the comfort of their own bed, however, Cyber Monday often yields much steeper discounts for buyers.

"Clothing sellers, such as ASOS, Old Navy, Gap, and others, have a fantastic Cyber Monday tradition for clothing shoppers—sitewide discount codes. Instead of hunting for product-specific deals, just select what you want, enter the promo code and get 30 to 50 percent off your entire cart," says Hollenbeck. "And, speaking of sitewide discounts, Target has made it a tradition (several years running) to offer 15 percent off sitewide."

Sarah Crow
Sarah Crow is a senior editor at Eat This, Not That!, where she focuses on celebrity news and health coverage. Read more
Filed Under
Black Friday • Saving Money
Read This Next
Latest News
Read This Next