If You Have This Vegetable in Your Kitchen, Do Not Eat It

It could make you seriously sick.

Eating healthy may seem relatively simple, and many of us try to maintain a balanced diet in our daily lives. But with holidays and barbecues upcoming this Fourth of July weekend, it can be that much more difficult to adhere to those nutritious meal plans. And making matters worse, one vegetable, in particular, could even be dangerous to eat. Read on to find out which veggie you shouldn't consume, and what you should do if you have it in your fridge.

READ THIS NEXT: Walmart Just Issued This Urgent Warning for Shoppers at Over 100 Stores.

Recently, different fruits and veggies have been recalled, including fresh organic strawberries sold under the brands FreshKampo and HEB. In May, the U.S. Food a Drug Administration (FDA) announced that the berries were unsafe for consumption after regulatory agencies linked them to a hepatitis A outbreak.

And just last week, Daily Harvest—a meal kit service where fruits and veggies play an integral role—came under fire due to one product in particular. The company's French Lentil + Leek Crumbles were voluntarily recalled on June 23 after consumers reported that they experienced gastrointestinal illness and potential liver function issues after eating the plant-based product. And now, another vegetable is making headlines for all the wrong reasons.

You might want to skip this burger staple on the Fourth.

If you're buying toppings for your hamburgers this weekend, you'll want to avoid one family favorite—Vidalia onions. Often grilled and put on burgers, these sweet onions add a unique flavor—especially when paired with salty bacon. Luckily, only ones purchased at Wegmans are being recalled. The grocery store chain issued a voluntary recall for Vidalia onions, due to potential contamination with listeria. So, you might want to spring for yellow or red varieties instead.

According to the Mayo Clinic, listeria infection is a foodborne bacterial illness, and it is particularly dangerous for those who are pregnant, those over the age of 65, and people who are immunocompromised. Symptoms of infection include fever, chills, muscle aches, nausea, and diarrhea, which can appear anywhere between a few days or a full month after eating contaminated food. If the infection spreads to the nervous system, you may also experience headaches, a stiff neck, confusion or changes in alertness, loss of balance, and convulsions.

Raw vegetables often become contaminated with listeria bacteria from the soil they're grown in or if contaminated manure was used as fertilizer, Mayo Clinic explained.ae0fcc31ae342fd3a1346ebb1f342fcb

The recalled onions were sold in three states. 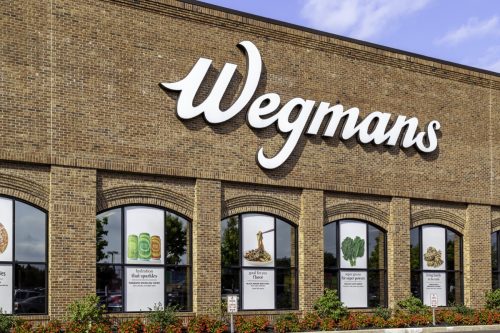 According to the recall announcement from Wegmans, potentially impacted onions were sold between June 23 and June 24.

The onions were sold in Massachusetts in Burlington, Chestnut Hill, Medford, Natick, Northborough, and Westwood; as well as in Pennsylvania at two Wegmans stores in Erie.

Don't eat these onions—return them instead.

If you've been shopping at any of these Wegmans locations, you'll want to give your fridge a once-over, just to be safe. Affected products were sold by the pound and might have a four-digit price look-up (PLU) sticker with the number 4159 or 4166, Wegmans said in the recall announcement.

Wegmans asks customers who bought these onions to return them to the customer service desk for a full refund.

According to Food Safety News, recalled products shouldn't be eaten. But if you did eat a recalled onion, Mayo Clinic instructs you to check for symptoms of illness and to contact your doctor if you experience any signs of listeria infection.