This Is the U.S, Airport You'll Wait at the Longest, Data Shows

Among 39 domestic international airports, this one has the longest security lines.

Traveling in the age of COVID poses an array of hassles for passengers. Industrywide, there have been mass flight cancellations brought on by staffing shortages, soaring ticket prices thanks to ballooning fuel costs, and shrinking occupancy to boot. But those inconveniences don't even take into account the anxiety triggered by endlessly waiting in line at overburdened airports (amid stressed-out passengers) around the country as demand for travel surges.

But when it comes to waiting times, not all domestic airports are created equal—and it helps to plan ahead if you know which ones pose the biggest possibility of substantial delays. It could mean the difference between making or missing that flight! With that in mind, the luggage storage company Bounce set out to investigate which airports have the longest and shortest wait times around the country.

To create its ranked list, they analyzed data from the Transportation Security Administration (TSA) and the U.S. Customs & Border Protection, comparing average wait times in both security lines as well as in passport control lines, plus a combination of the two. We reviewed the data to determine which U.S. airports have the longest security lines, a factor that affects every passenger, whether flying domestic or international. Note that these times just refer to the amount of time spent in the security line itself—you'd expect to spend much more time handling your luggage and overall navigating the terminal.

First, the good news: It might surprise you to learn that the New York tristate area's bustling Newark Liberty airport has the shortest wait times among 39 airports analyzed, at just five minutes and 18 seconds. Now for the bad news: Read on to learn which five U.S. international airports have the longest average security line wait times.

RELATED: The Least Trusted Major Airport in the U.S., According to Customers. 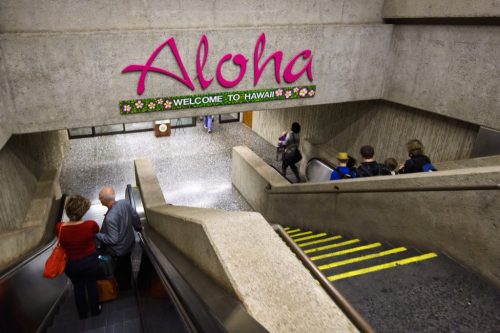 This airport in Honolulu, Hawaii ties for fourth place on the list with an average security line wait time of 25 minutes. (Comparatively, its average passport control wait time is just eight minutes and 14 seconds.)

New York's famously bustling JFK airport ties for fourth place on the list with a 25-minute security line wait time. Its passport control line is much dicier than Oahu's however: Expect to wait nearly 20 minutes for a combined total of nearly 45 minutes for international passengers.ae0fcc31ae342fd3a1346ebb1f342fcb

RELATED: For more travel news and tips delivered straight to your inbox, sign up for our daily newsletter.

San Francisco's SFO comes in at third place with an average wait time of 27 minutes and 48 seconds. That's just one minute less than the airport that nabs the No. 2 spot.

In second place is St. Louis Lambert International Airport, where the average wait time is 28 minutes and 48 seconds.

While Palm Beach's airport has the longest average security line wait time, another Florida airport took the overall slowest spot on the list when factoring in combined wait times for both security and passport control. That unfortunate honor goes to Miami International Airport, with an average security wait time of 24 minutes and 54 seconds, plus an average passport control wait time of 22 minutes and three seconds. Combined total wait time in Miami? It's 46 minutes and 57 seconds. (So make sure your phone is charged and pack a snack!)

RELATED: Never Forget to Do This After Your Flight Lands, Flight Attendant Warns.