Major Airlines Say Flight Cancellations Could Get Even Worse—Here's Why

After thousands of canceled flights, union reps say staff is at a breaking point.

Major airline carriers have been blanketing news reports lately—and for all the wrong reasons. Just last month, Southwest Airlines canceled nearly 2,000 flights. Then, over the four-day period spanning Halloween weekend, American Airlines canceled another 2,000 flights. These mass flight cancellations, along with others across the industry, have stranded thousands of travelers and created havoc in airports and for customer service agents across the country. It's already been the stuff of travel nightmares… and it could be on the verge of getting even worse. Read on to find out why.

Staffing shortages in a tight job market are causing mass cancellations across the airline industry.

Although Southwest initially pinned a portion of its problems on flight traffic control and weather issues, and American cited weather, per CNN, both of these major airlines' disruptions owed significantly to staff shortages across their rosters of pilots and flight attendants.ae0fcc31ae342fd3a1346ebb1f342fcb

Across the industry, airlines encouraged thousands of employees to take leave or accept buyouts when the pandemic hit. But in an unexpectedly abrupt turnaround, demand for domestic travel roared back—and that left airlines struggling to staff up to meet that demand in a job market suffering from an overall lack of candidates.

RELATED: Another Major Airline Is Cutting Flights for the Next 2 Months.

Airline unions say their members are under unsustainable levels of pressure.

Officials representing multiple airline unions say that their members have been pushed to the "breaking point" under these badly understaffed working conditions, CNN reports. Pilots and flight attendants are struggling to get adequate rest, a government-mandated requirement for the job. According to CNN, American Airline pilots have recently picketed to make their complaints known, and Southwest pilots are planning a similar approach.

The holiday rush is likely to compound the problem of canceled and delayed flights. 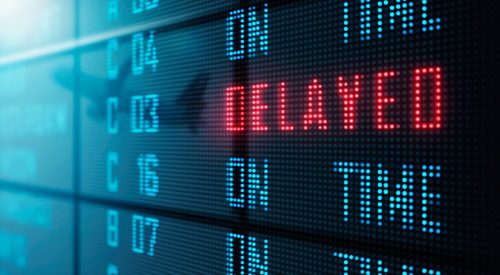 The crisis may be about to get worse before it gets better. "We want that flying to get done, but we don't want tickets sold that can't be fulfilled," Dennis Tajer, an American Airlines pilot and spokesman for the Allied Pilots Association, said recently, as reported by The Hill. "Are they biting off more they can they chew?"

Carriers are attempting to staff up to get ahead of the holiday travel rush.

Airlines are indeed expecting a busy season in the coming months thanks to holiday travel, pent-up demand, and a receding wave of the pandemic. And they're certainly doing what they can to make it work under challenging circumstances.

To mitigate the potential for chaos in airports around the country, Southwest trimmed its schedule for November and December. The company is also beefing up staffing ahead of the holiday travel rush that begins at Thanksgiving and carries straight through Christmas to the new year.

"So our reserves are over 20 percent for our crews, which helps you operate every single day," Southwest's next CEO, Bob Jordan told Yahoo! Finance. Reserve staff are on-call to report for whatever flights need additional staff.

That could potentially make a big difference: The figure is double the amount of reserve staff in place in October when the airline was forced to strike thousands of flights from its schedule, stranding travelers—and costing the carrier a whopping $75 million, per CNN.

RELATED: American Airlines Just Banned a Passenger for Life for Doing This.