You may want to opt for something else if you notice your flight attendant serving these.

When it comes to the most loathed parts of the flying experience, arguably nothing gets more criticism heaped onto it than airplane meals. And yet, no matter your opinion of what's served at 35,000 feet, the same food that's been immortalized as a stand-up punch line is often your only option to beat hunger on a long flight. But besides the idea of eating something that may not exactly be award-winning cuisine, some experts warn that certain meals served on airplanes can increase your risk of foodborne illness.

"In the restaurant industry, food is cooked and served without delay," Jean Dible, an airline food safety expert, told CNBC. "In the aviation industry, food is prepared at a catering company and then packed in insulated containers and trucked to airports to be put aboard the aircraft. [And] incorrect holding temperatures is the number one reason for foodborne illness on a worldwide basis."

And it may not just be the ability to keep food warm enough. While the catering facilities are meant to be regularly inspected and held to high hygiene and safety standards, the Food & Drug Administration (FDA) issued no less than 1,486 food safety citations to the three most utilized airline caterers and 16 airlines between October 2008 and December 2019, finding violations such as the presence of harmful bacteria and vermin, NBC News reports. So what should you avoid eating? Read on to see which airplane meals could be putting your health at risk while you fly.

RELATED: Never Do This When Eating on a Plane, Flight Attendants Warn.

Nothing is wrong with wanting to eat healthy while you're traveling. Unfortunately, experts warn the salad or diced fruit being served on your flight could potentially get you sick.

"When it comes to airline food, the more processed and cooked it is, the safer it is for avoiding food illness. This fact is not helpful for dieting, but it is good practice for eating out in general," Maria Hanson, a health expert with InsuranceProviders.com, tells Best Life. "Leafy greens are constantly on the list of recalled food items due to Salmonella and E. coli contamination. Sprouts are another prolific culprit in the food poisoning rankings, and tomatoes and celery often pop up in recalls. So skip the salads and opt for well-cooked food if your goal is to avoid food poisoning," she recommends.

However, there is still a way to snack on produce with less risk. "If you do want some fruits or veggies, look for something with a peel that you can remove, like an orange or a banana, or something in a can or a sealed container, "Dible says. 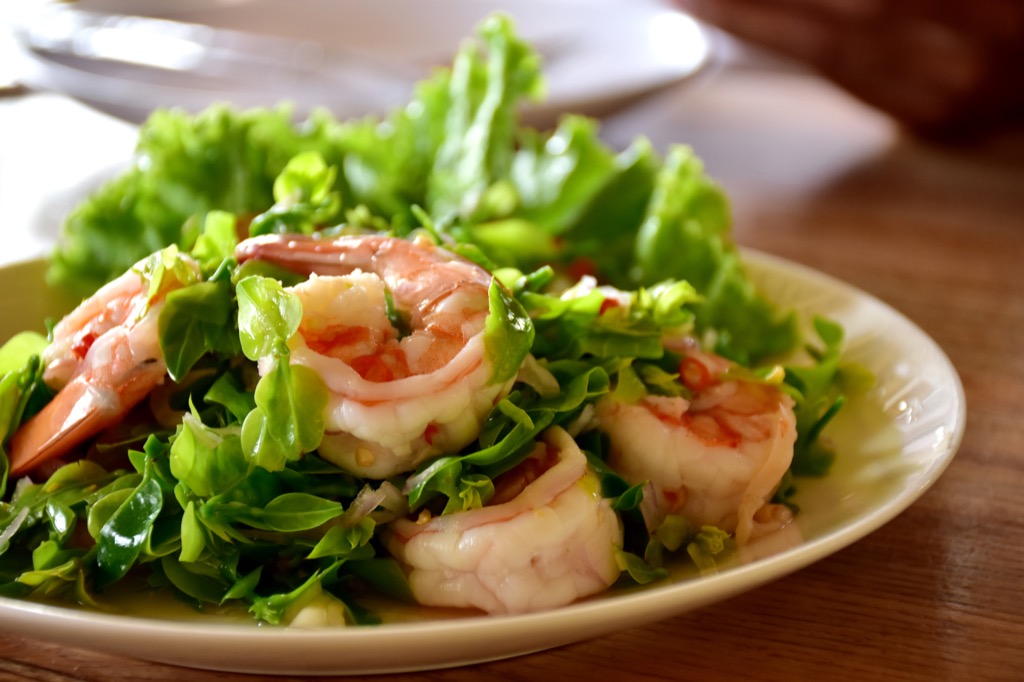 The option of chicken or fish on flights might seem like a dated cliche. But when it comes to seafood served on airplanes, shrimp can sometimes still make its way on the menu. "All seafood, but in particular shrimp and oysters, are pretty darn dangerous," Dible told CNBC, adding that "they serve a lot of shrimp aboard first-class."

However, if you're given the option, you might want to pass on the shellfish while you're dining in the sky: According to a 2015 study conducted by Consumer Reports, 60 percent of frozen shrimp sampled in a laboratory contained harmful Salmonella, Vibrio vulnificus, listeria, or E. coli bacteria, making it a particularly risky plane food.

While ice may not technically be part of your meal, there's a good chance you'll be enjoying a beverage alongside it. And even though ice is usually delivered instead of being made onboard using the bacteria-laden water from the plane's tanks, experts warn that it can still be downright dirty due to how the flight crew handles it during service and how rarely ice bins get sanitized.

"A common overlooked risky airplane food is the ice that comes with cold drinks. It can be a source of foodborne illness due to how many different people handle it, increasing the risk of contamination," Holly Klamer, MS, a Michigan-based Registered Dietitian Nutritionist (RDN) and writer, tells Best Life. "Ask for your cold beverages in a can or bottle without ice to avoid taking the risk."

As a staple grain and one of the most widely consumed foods on the planet, it's no surprise that rice often finds its way onto airline menus. Unfortunately, it can be dangerous when it isn't kept warm enough after cooking, allowing Bacillus cereus bacteria spores to grow and turn the dish into something that can make you quite ill.

According to an anonymous post on the foodborne illness forum IWasPoisoned.com, a passenger flying from Accra, Ghana to Houston, Texas on a United Airlines flight became sick mid-flight due to rice. "I was the only passenger in first class to eat the vegan meal. The rice smelled odd, but I had already taken a bite," the passenger reports. "I was so nauseous all flight but eventually vomited…By the time we landed, I had to be taken via ambulance from the tarmac to the hospital."

It's not at all uncommon for airlines to serve dairy along with their in-flight meals, whether it's yogurt at breakfast or a cheese appetizer with dinner. Unfortunately, experts warn that dairy products are particularly sensitive to issues during transportation and can quickly spoil.

In the case of some products, it can also be impossible to tell when it's turned to the point of being dangerous to eat due to bacteria such as listeria. "You can't see anything—there's no odor, nothing you can see. It's invisible," Dible told CNBC.ae0fcc31ae342fd3a1346ebb1f342fcb

Whether you're vegetarian on land or not, you may want to consider going without meat during your flight. Chicken, beef, and pork items can sometimes cause food poisoning when not cooked to the correct temperatures. Since meals go out en masse, it's not always likely that a flight attendant will notice if a meat dish was improperly prepared or cooked.

"You have to rely often on getting something steaming hot that looks to you well-cooked," Patricia Griffin, MD, chief of the Center for Disease Control and Prevention's (CDC) Enteric Diseases Epidemiology branch, told the AARP. "A thermometer is best. But cooking your meat products really well is very important."

But it's not just hot dishes you should be wary of: deli meats and cold cuts can also be potentially dangerous if not stored properly or become cross-contaminated during plating or preparation. If you're unsure or just unwilling to take the risk, you may want to opt for a bag of pretzels instead of that turkey sandwich that's being served.

Zachary Mack
Zach is a freelance writer specializing in beer, wine, food, spirits, and travel. He is based in Manhattan. Read more
Filed Under
Food • News • Travel Advice
Read This Next
Latest News
Read This Next