The No. 1 Sign You Have Black Widows in Your Home, Experts Warn

You may be dealing with a venomous spider is you notice this.

It's not uncommon to see a spider in your home, and most of the time, they're harmless. But in the U.S., there are a few dangerous spiders you'll want to keep an eye out for, including the dreaded black widow. One bite from this venomous spider can result in swollen eyelids, difficulty breathing, tremors, and in some cases, even death. But like most spiders, black widows are tiny—maxing out at 13 millimeters long—so it's not necessarily easy to know if you have one taking up residence in your home. Fortunately, experts say black widow spiders can be recognized by one clear clue that they tend to leave around your house. Read on to find out what they say is the tell-tale sign you have a black widow.

RELATED: If You Never Clean This, You're Inviting Black Widows Into Your Home.

If you notice messy spider webs in your home, you could have a black widow. 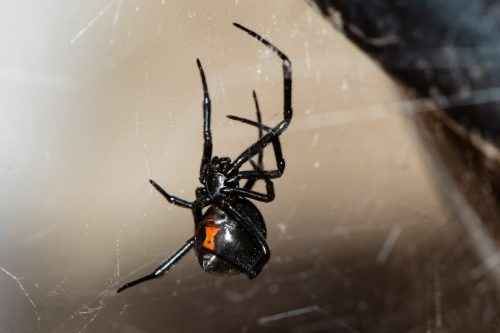 Most spider webs are elegantly formed in perfect repeating patterns, but a black widow's web will be anything but neat, according to Jordan Foster, a pest management expert at Fantastic Pest Control.

"If you're unlucky enough to share your home with those venomous spiders, the first thing you will notice is a lot of cobwebs," Foster explained. "Unlike the well-structured webs that many spiders produce, the one the black widow makes is very messy with no pattern to it."

Black widows also build their webs lower than other spiders.

You won't need to look up too high for a black widow's spider web either, says Rachel Strike, a pest control researcher with PestAdvisors. According to Strike, most harmless house spiders will build their webs up high in either the nooks or corners of your ceiling. Black widows, on the other hand, build their webs "near the ground, often in doorways or basement crevices," she says.ae0fcc31ae342fd3a1346ebb1f342fcb

Jack Miller, a pest infestation specialist and founder of How I Get Rid Of, says that black widows will usually be hiding in the darker areas of your house. They also prefer "seldom-used areas such as garages, basements, and crawl spaces," says Michael Thorne, a certified entomologist and technical service manger for Ehrlich Pest Control.

And for more pest-related tips, sign up for our daily newsletter.

If you have been bitten by a black widow, seek medical care immediately.

According to Throne, a black widow will likely only bite you when provoked or disturbed, as this spider tends to be more reclusive in nature. "Most of the time children or pets are bitten when they accidentally invade a web," he says.

A black widow spider bite will produce a sharp pain and leave behind red puncture wounds. Within 20 minutes to an hour after you've been bitten, you may notice other symptoms such as "pain and stiffness in the bite area, abdominal cramping, fever, chills, nausea, and vomiting," Thorne says.

If you suspect you've been bitten by a black widow, Thorne says "it is important to seek immediate medical attention. If treated, most symptoms subside in 24 to 48 hours. Untreated, symptoms can persist for weeks."

You should call an exterminator right away if you see a black widow in your home.

You might be willing to allow a spider or two their freedom in your house, hoping they find their own way out, but you should never do so with a black widow. If you see one, call pest control so they can deal with possible infestations, pinpoint access points, and treat your home, according to Foster and Thorne.

Fortunately, this spider is easy to identify. "It's hard to get the black widow spider confused. You will distinguish it from other spiders by the deep shiny black color of its body. The female is famous for the signature red hourglass marking on her abdomen, while the male can have white stripes on the abdomen, depending on the species," Foster says, pointing out that it's usually only the more recognizable female black widows that will bite.

RELATED: This Is the No. 1 Sign There's a Snake in Your House, Experts Say.