With the world's obsession with Princess Diana before—and after—her tragic death in 1997, it's only natural we'd want to know everything about her sons, Princes William and Harry and their wives and family. These days newly-minted duchess Meghan and future queen Catherine get a lion's share of the headlines for their flawless fashion sense, and the October wedding of the latest royal bride-to-be, Princess Eugenie is sure to make news. But there's another young royal who has lived a fascinating, somewhat under the radar life—and we love her for it. In celebration of her upcoming 30th birthday, here are 20 fascinating facts about Princess Beatrice. And for more amazing stories about the royal family, read up on the One Habit Royal Insiders Want Meghan to Stop.

1
She's named after another princess. 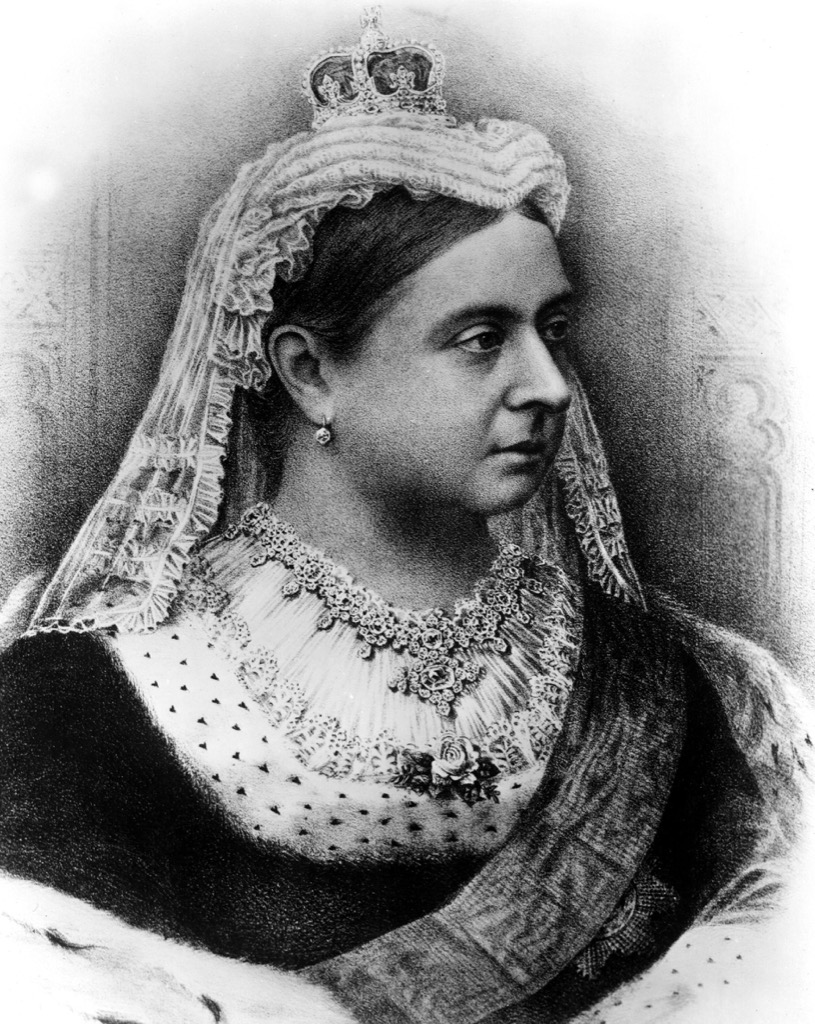 2
Her birthday is a palindrome. 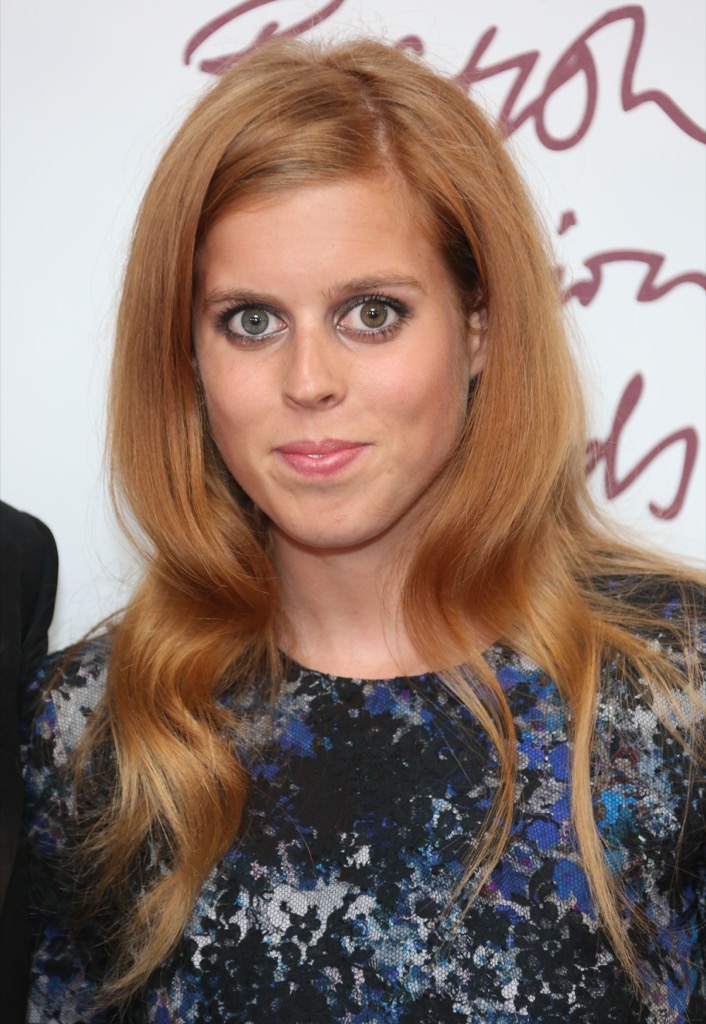 She was born on August 8, 1988 at the Portland Hospital in London, making her 8/8/88 birthday a palindrome—a sequence of numbers that read the same backwards and forwards. And get this: She came into the world at 8:18 pm.

3
She had a historic place in the of succession. 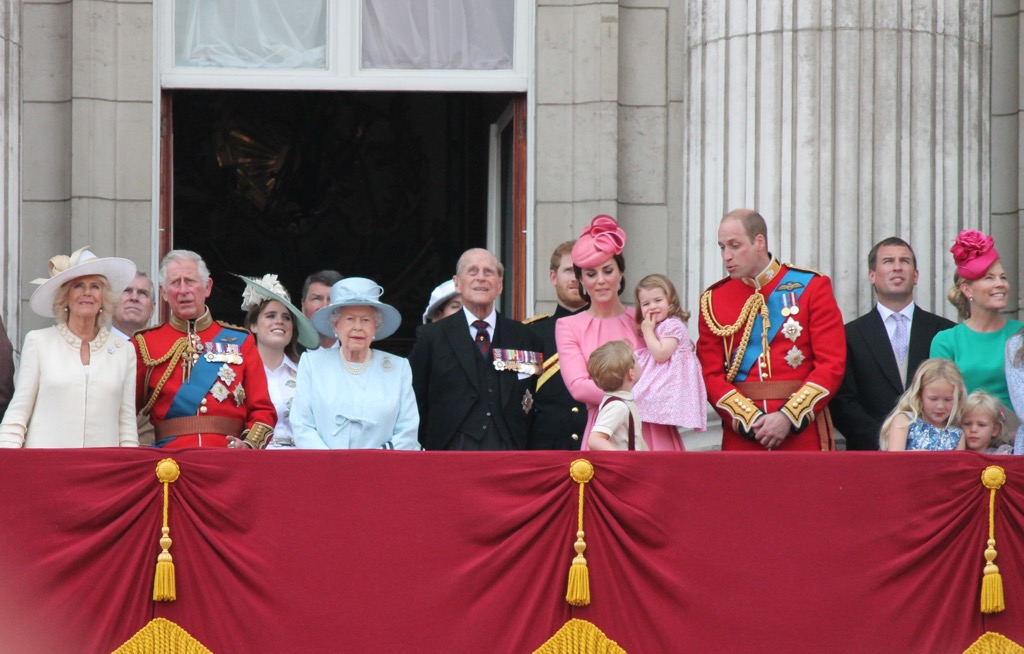 As the first child of the Duke and Duchess of York, and fifth grandchild of Queen Elizabeth II and Prince Philip, Duke of Edinburgh, Beatrice was the first female in the line of succession until 2013 when the Succession to the Crown Act went into effect declaring that princes no longer take precedence over their sisters, which brought an end to the system of male preference primogeniture that had been in place since the Act of Settlement of 1701.

When Princess Charlotte was born in 2015, Beatrice was dropped down to seventh in line behind Prince Harry. Prince Louis' birth earlier this year knocked her down another spot. She is currently eighth in line to the throne.

Beatrice and her sister Eugenie are two of only three of the Queen's granddaughters whose names are preceded by the royal designation, "Her Royal Highness." (The other is Princess Charlotte, daughter of Prince William and Catherine, Duchess of Cambridge.) Their cousins Lady Louise Windsor and Zara Phillips do not hold this distinction. 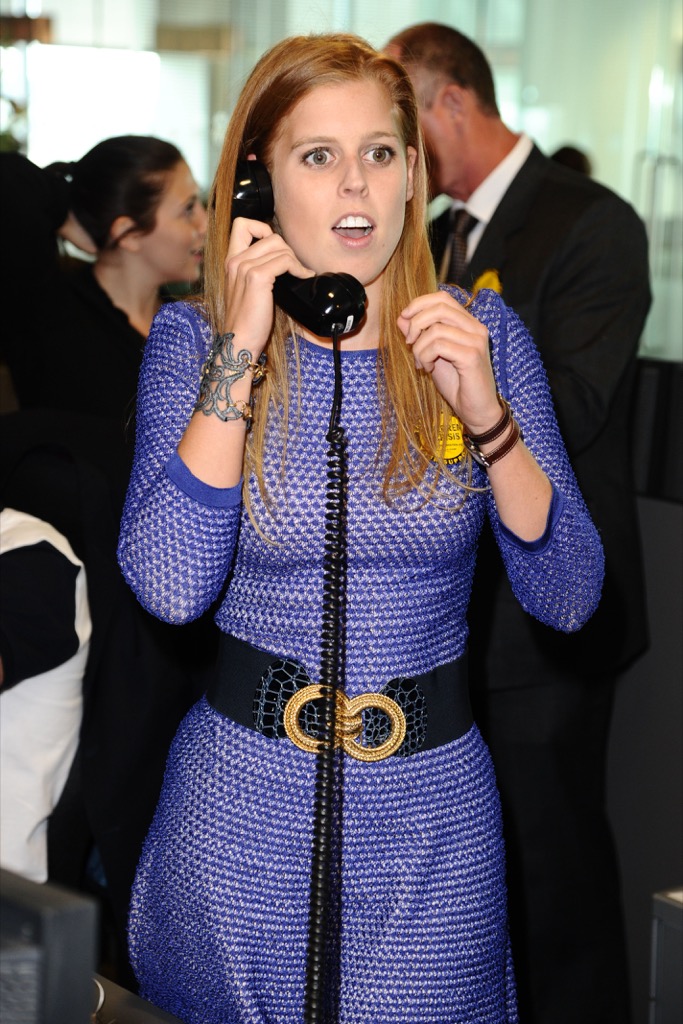 Although she often appears at events like Trooping the Colour, Princess Beatrice does not receive money (which comes from the British taxpayers) through The Sovereign Grant. (Prince William, on the other hand, has the full-time job to represent the crown.) In a cost-cutting measure, Beatrice even lost her police protection, in 2011. Her biography on the Duke of York's website reports she "works full-time in business."

6
She has a real job—but no one is sure what it is. 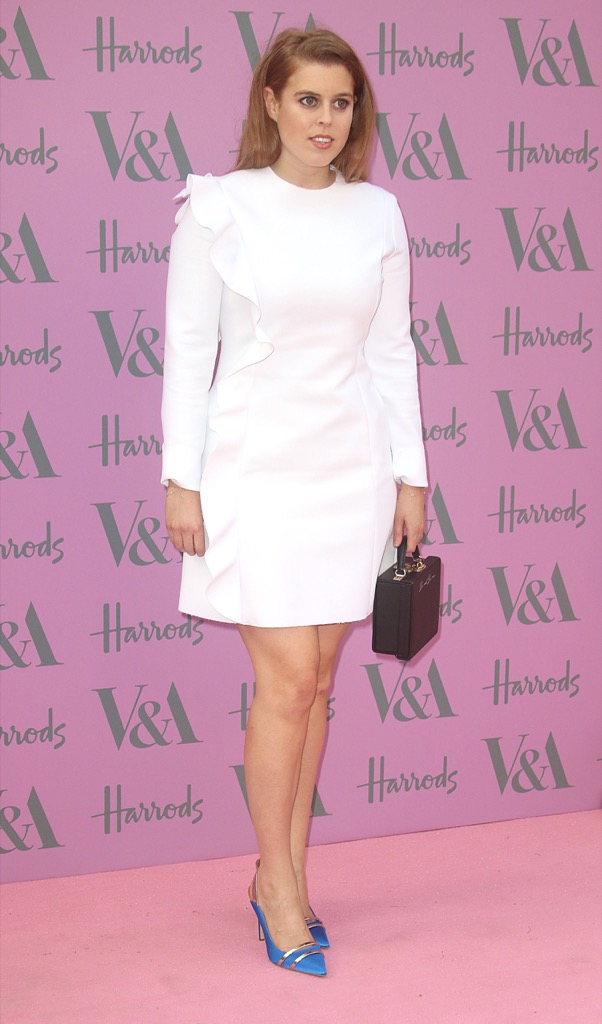 Beatrice has had several different jobs in recent years, including a gig with a venture capital firm. Her LinkedIn profile (where she's "Bea York") lists her current position as vice president, partnerships & strategy for the New York-based software company, Afiniti. Since she lives in the UK, it is assumed she's a "consultant" to the company, but The Daily Beast has speculated that the princess' greatest contribution to the firm is name recognition and access to her high-roller friends.

7
She's the first royal to run a marathon.

In 2010, she became the first member of the royal family to complete the London Marathon (something she proudly notes in her official royal biography). She and a group of friends wore colorful tutus and legwarmers for the race to draw attention to "Team Caterpillar," which was running to support a number of children's charities, including Children in Crisis, which was founded by her mother.

8
She works to stay in fighting shape. 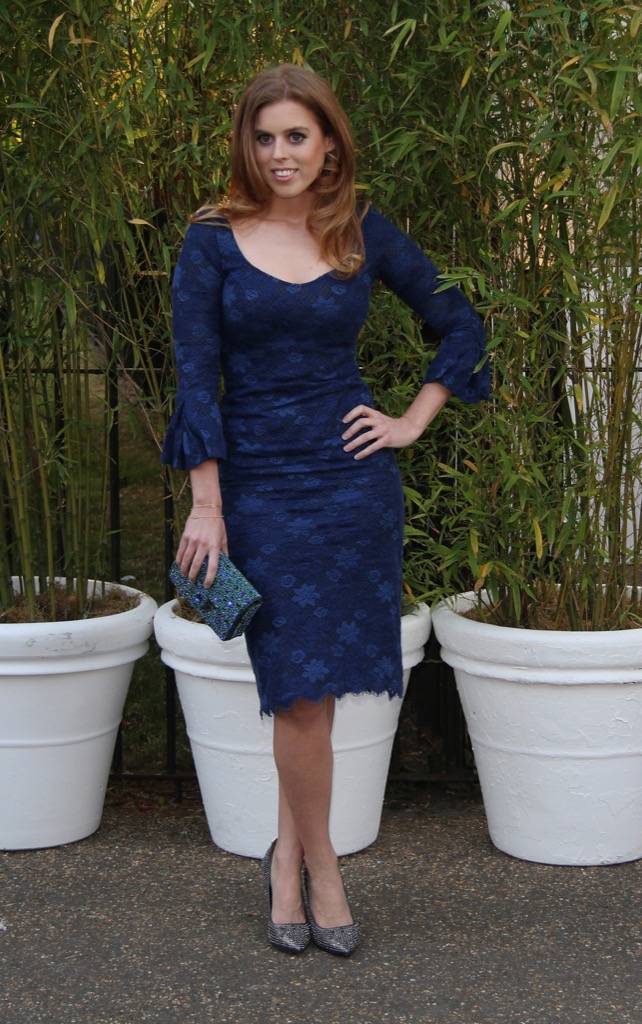 Beatrice lost nearly 20 pounds when she trained for the Marathon and has kept the weight off by going to the gym where she boxes and does lots of squats. She told the Daily Mail she was hurt—but motivated—by comments made in 2008, when unflattering photos of her in a bikini surfaced in the press. "I could have kicked myself for wearing it," she said at the time.

In 2009, Beatrice, who once studied drama, became the first member of the British royal family to ever appear in a feature film. (Meghan Markle made her first uncredited appearance in a movie in 2010). She had a small role in Young Victoria, which chronicled the early life of Queen Victoria and starred Emily Blunt.

In 2012, when Beatrice and several friends founded The Big Change Charitable Trust—which supports projects in the UK whose mission is to improve the lives of young people—she joined her fellow founders and climbed Mont Blanc in the Alps as the charity's first fundraising project.

11
She and Eugenie have been at the center of a royal family feud.

In October 2016, reports of a rift between Prince Andrew and Prince Charles over the future roles of Beatrice and Eugenie were widely reported in the British press. Palace insiders have sniped that Andrew feels his daughters are often overlooked and shortchanged when it comes to royal recognition and privileges. Some have even speculated that Eugenie's lavish wedding is Andrew's way of giving his daughters their overdue moment in the limelight. It is expected that Beatrice will be her sister's Maid of Honor.

12
Prince William's wedding was a turning point for her. 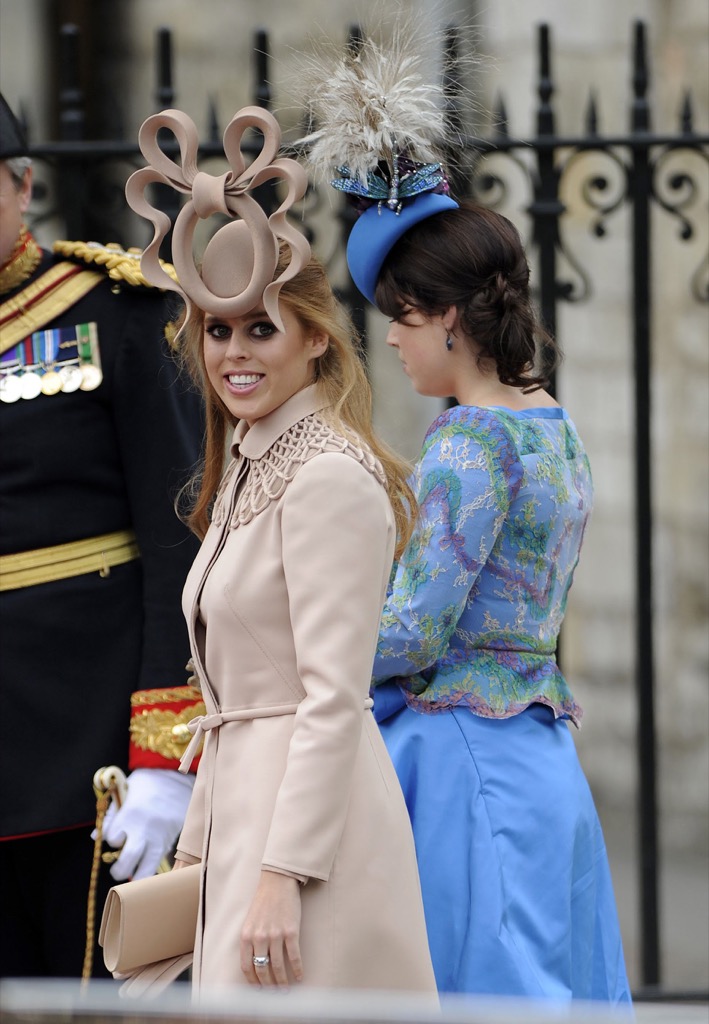 After being widely ridiculed for wearing a custom Philip Treacy hat that fashion critics compared to both a pretzel and a toilet seat to her cousin's wedding, The Express reported Beatrice had engaged the services of stylist Charlie Anderson whose clients include Emma Watson to engineer a style reboot for her immediately afterwards.

13
Her infamously ugly hat was auctioned off for charity. 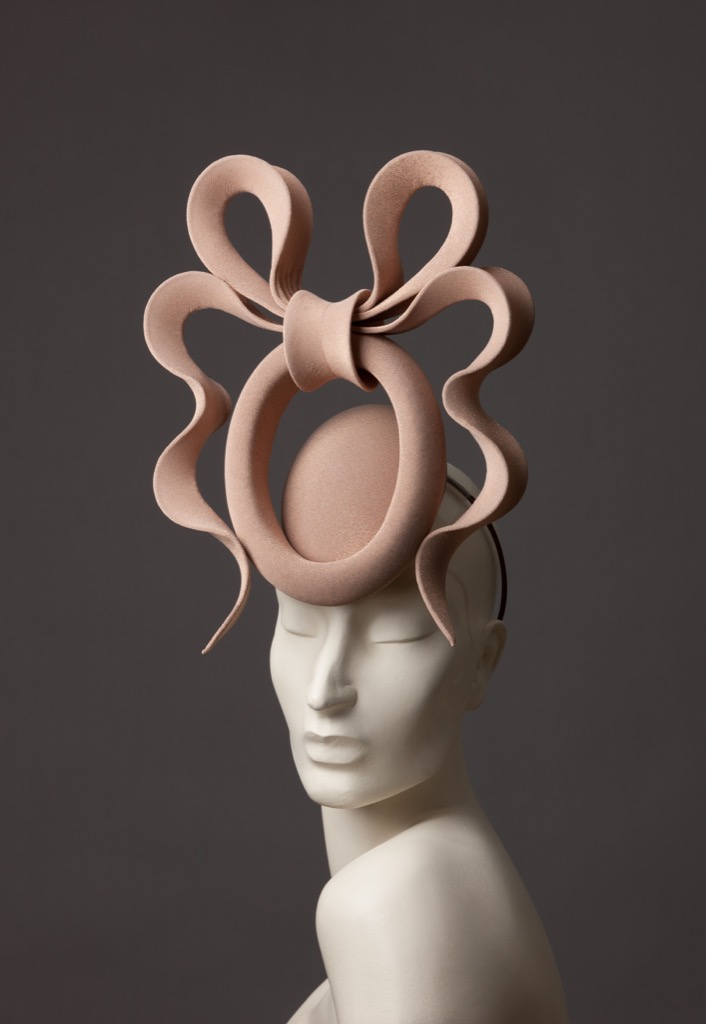 Beatrice turned her disastrous fashion faux pas involving the aforementioned hat into something positive when she donated the piece to an online auction benefiting children charities, where it sold for more than $130,000.

14
She's close to both her parents. 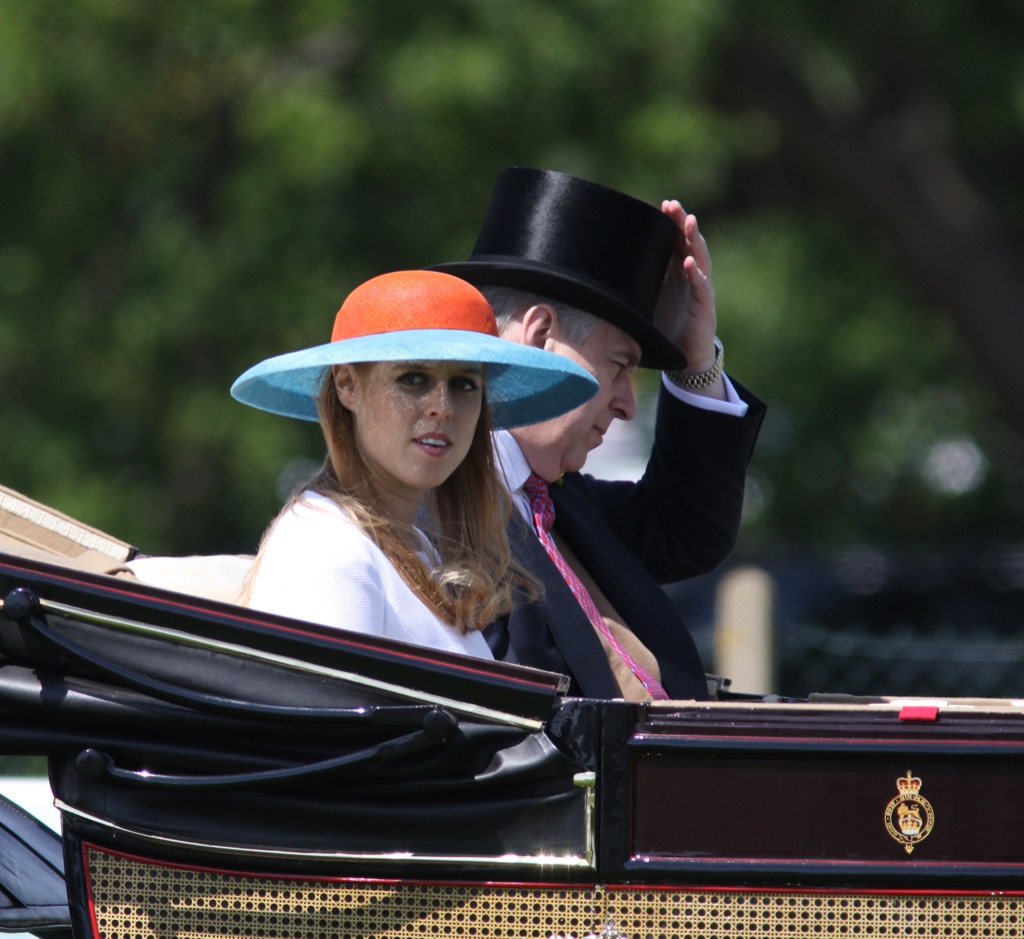 Her parents divorced in 1996, but continued to live together in the same house and have, by all accounts, raised Beatrice and Eugenie together. Beatrice has a very good relationship with her father and is fiercely protective of her mother despite Sarah's status as an outcast among the royal family following her involvement in multiple scandals.

Most recently, in 2010, Sarah was recorded offering access to her ex-husband to tabloids in exchange for £500,000, which reportedly cost her an invitation to William and Kate's wedding in 2011. Beatrice and Eugenie never wavered in their support. "We've been through some incredibly stressful times together as a family and every single minute she created joy," Beatrice has said of her mother. "I am so lucky that I get to learn from her every single day. I'm inspired by her ability to give, even when she's going through something hard." 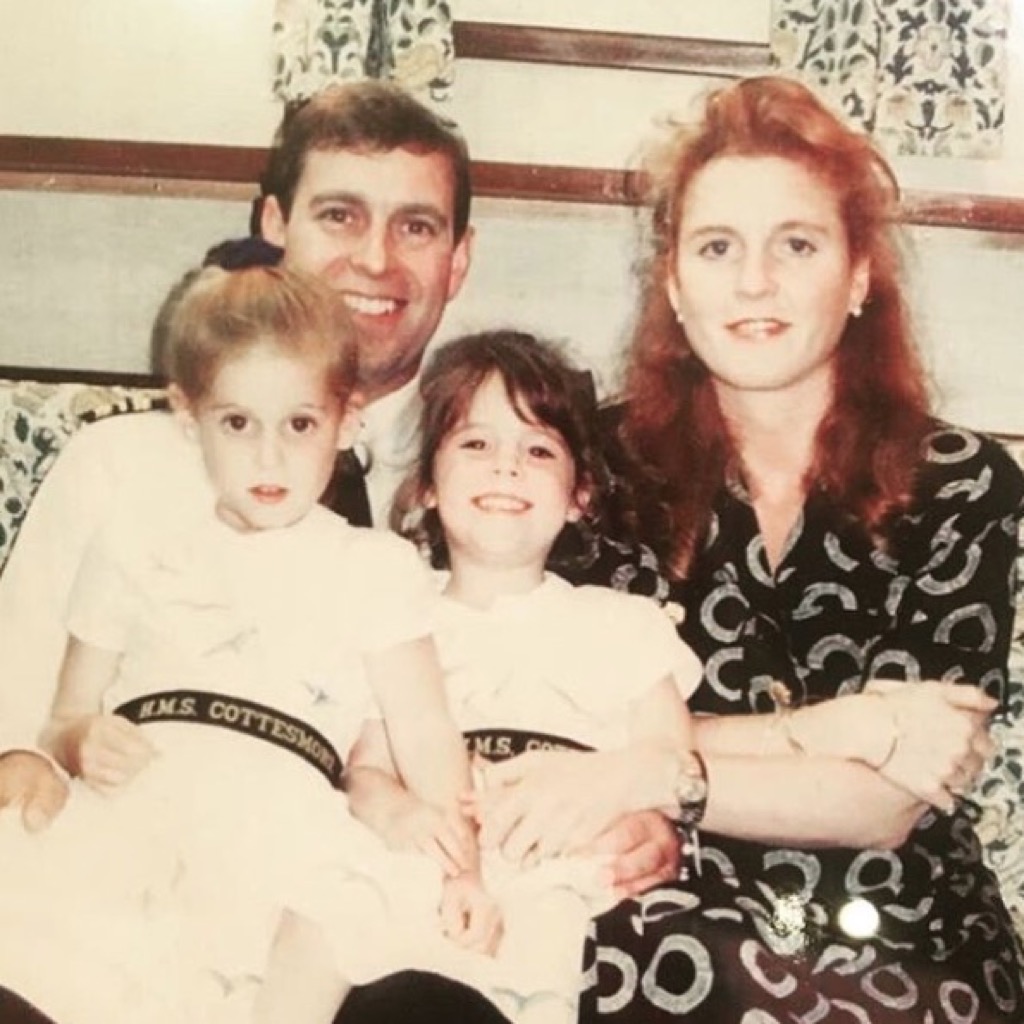 Beatrice was diagnosed as dyslexic as a child, and her parents would record themselves reading her favorite stories so she could still enjoy bedtime stories when they traveled. The princess is now patron of the Helen Arkell Dyslexia Centre and has spoken about how she sees the condition as an opportunity rather than a disadvantage. She has told children struggling with the condition, "It is an opportunity and a possibility to learn differently. You have magical brains, they just process differently. Don't feel like you should be held back by it."

16
She's been a runway model—for a good cause.

In 2007, Beatrice made her catwalk debut at London Fashion Week in the Fashion for Relief Show. She and her mother both wore black dresses by Dolce & Gabbana accessorized with millions of dollars' worth of jewels from Garrard.

Beatrice and Eugenie worked with their mother Sarah on a collaboration with British artist Teddy M to create the first ever royal graffiti-inspired painting. The work, titled "Royal Graffiti," featured the handwriting of all three royals and was auctioned off for charity. 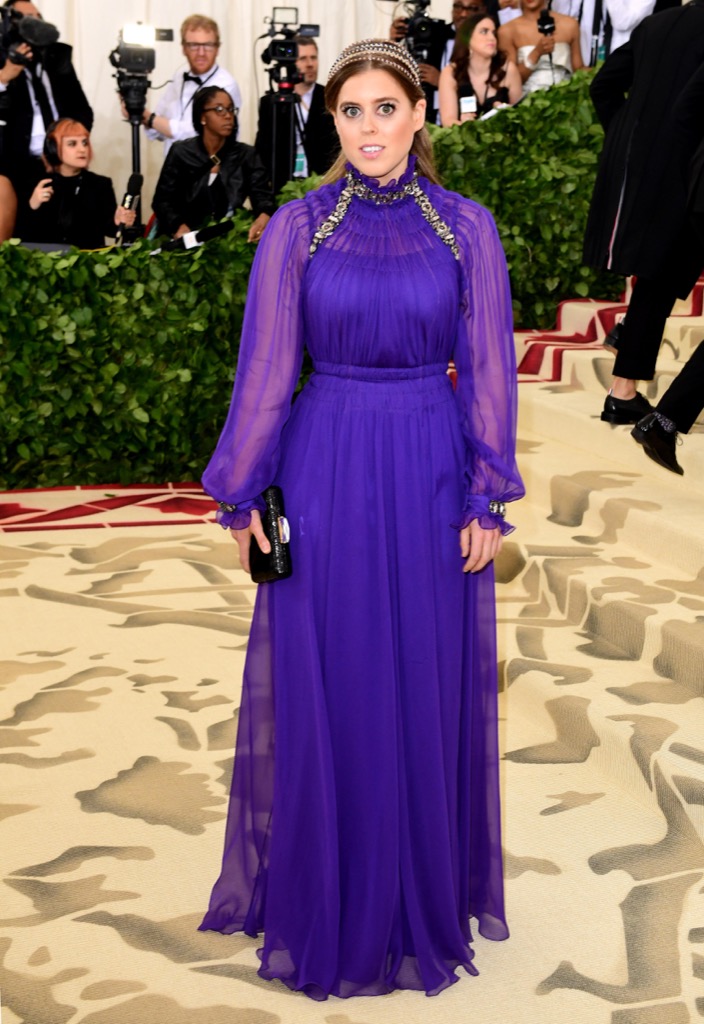 Beatrice attended the chi-chi Met Gala in New York City hosted by Vogue editor Anna Wintour in May of this year and looked every inch the princess. Her appropriately regal purple gown by Alberta Ferretti landed her on several best-dressed lists. In keeping with the theme "Heavenly Bodies," she wore a halo-like headpiece.

It was just announced by British Vogue's editor Edward Enninful that Beatrice and Eugenie will be featured in the fashion bible's behemoth September issue. Diana graced the cover in 1991 and Kate was chosen as the face of the magazine's special issue celebrating its 100th anniversary in 2016.

In his editor's letter, Enninful wrote the interview and photo shoot took place at their family home, Royal Lodge in Windsor, "where Princesses Beatrice and Eugenie welcomed Vogue into the heart of the Royal family." The York sisters won't be on the cover like Diana or Kate (that honor goes to Rihanna), but this is a major coup for the formally sartorially-impaired sisters.

When super model Karlie Kloss took to Instagram Stories on July 25 to post screengrabs of her closest pals reacting to the news she had gotten engaged to Joshua Kushner, she inadvertently revealed Beatrice's secret social media account. In the photo, Beatrice was caught with her mouth wide open as she learned the news. Kloss tagged "@Beayork," on the post with a purple love emoji.