Prince Charles' Most Controversial Moments That You've Forgotten About

The venerable royal is no stranger to landing in hot water.

Prince Charles' 70th birthday this month is drawing near. He is still waiting to be king, in the shadow of his mother, Queen Elizabeth, but otherwise personally fulfilled.

Forty years after he first met her, Charles has been married to the love of his life, Camilla Parker Bowles (now Duchess of Cornwall) since 2005. He seemingly has a good relationship with his sons, Princes William and Harry (though my royal sources say he is much closer to Harry). In the British papers, he was heralded as nothing short of a knight in shining armor when he stepped in at the last minute to walk Meghan Markle halfway down the aisle after her errant father, Thomas Markle, backed out, after his scheme to stage photos with the paparazzi was uncovered just days before the wedding. Then, on the big day, Charles charmed the world with the gallantry and kindness he showed Doria Ragland, Meghan's mother—the sole representative of her family to attend the wedding. After the ceremony, he stood in front of St. George's Chapel between Camilla and Doria arms linked with both women as a show of family unity.

But there was a time when Charles was often a subject of scorn and ridicule. During his ill-fated marriage to Princess Diana, which imperiled the very future of the monarchy, he often made headlines for things he'd surely rather forget. Well, we haven't. Here's a look back at Prince Charles' most controversial moments.

1
The "Whatever … love means" remark

Charles and Diana's marriage was doomed from the start. When the couple gave their very first interview on the day of their engagement in February 1981, the prince stunned the world when he gave one of the most awkward answers in history to a simple question: "Are you in love?" The blushing bride-to-be nervously replied, "Of course." The visibly uncomfortable prince then said, "Whatever 'in love' means."

The public didn't know at the time that the prince had all but been forced to marry Diana, who was deemed a suitable match for the future king because of her aristocratic background (and, even more important at the time, because she was a virgin) in order to secure an heir to the throne—even though he still loved Camilla Parker Bowles. This moment, forever enshrined in time on video, is a sad artifact of the disastrous union that nearly brought down the British monarchy.ae0fcc31ae342fd3a1346ebb1f342fcb

2
Charles goes to the opera at the worst possible time.

In 1991, eight-year-old Prince William underwent emergency surgery for a skull fracture after being hit by a golf club while playing with schoolmates. The young prince was kept overnight at London's Great Ormond Street Hospital following an hour-long operation. Diana spent the night sleeping in a bed set up near William's room so she could look after her son. Charles took a different approach.

Rather than stay and comfort his wife and injured son, after a fifteen minute visit, the prince left the hospital to go to the opera. It's no surprise that, when Buckingham Palace informed the press of the prince's decision to keep his previous engagement but "kept in touch with doctors" (this was long before mobile phones), he was bashed in the tabloids.

One of the most iconic photographs ever taken of Diana was shot during a visit to India with Charles in February 1992. The couple were expected to visit the Taj Mahal together, but Diana went on her own, which lead to the headline-making photograph taken by Martin Keene. It became the defining—and most memorable—image of the tour. Charles opted to visit an architecture school and was making a speech to industrialists while his wife sat alone on a bench in front of the famous "monument to love."

At the time, Diana told reporters her visit there "was a very healing experience." When asked what she meant by her comment, she replied,"Work that out for yourself." The Mirror reported Diana told her host Professor Mukund Rawat during the visit, "It would have been better if both of us had been here. But my husband has to be in Delhi."

The image became the embodiment of Diana's loneliness and isolation, and took on greater significance when the royal couple separated a few months later. Charles was roundly criticized in the media for not accompanying his wife. During their week long trip to India in 2016, Prince William and Kate Middleton seemingly paid homage to the late princess by recreating the shot sitting side by side in the very spot Diana posed all those years ago. Photographers also captured a rare moment of William losing his composure when the prince was snapped wiping tears from his eyes. 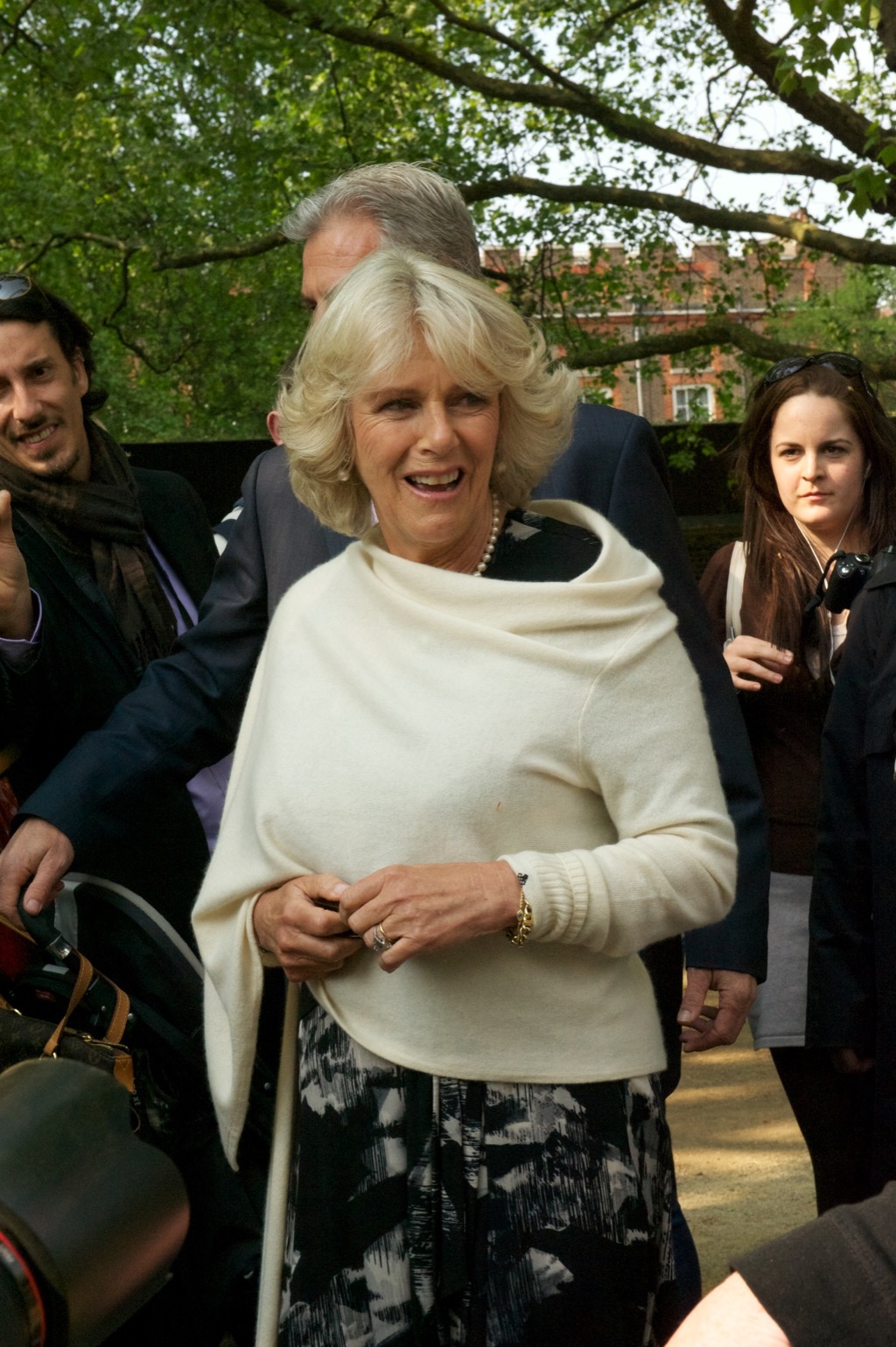 One of the most scandalous—and embarrassing—episodes of the prince's life occurred in 1992 when a tape of phone conversation between Charles and Camilla was leaked to the media. On the infamous recording, Charles said he wanted to… Well, just read for yourself:

Charles: "Oh god. I'll just live inside your trousers or something. It would be much easier!"

Camilla: "You are a complete idiot!" (Laughs.) "Oh, what a wonderful idea!"

The humiliating episode became known as "Camilla-gate" or, in some circle, "Tampongate."

5
His persistent criticism of architecture

Charles has often been criticized by the profession for his strong—and vocal—dislike of modern design. The Prince is best known for his harsh criticism (which was seen as an "attack") on modernism at a 150th-anniversary celebration at Hampton Court Palace attended by architects and design professionals in 1984. In his speech, he unexpectedly slammed a proposed extension to the National Gallery as "a monstrous carbuncle on the face of a much-loved and elegant friend." The plans were later scrapped.

Then, three years later, at the Corporation of London planning and communication committee's annual dinner Charles said: "You have to give this much to the Luftwaffe, when it knocked down our buildings, it did not replace them with anything more offensive than rubble."

In 2009, noted architect Richard Rogers blamed Charles for getting him thrown off the prestigious Chelsea Barracks project.  Rogers told the Guardian, "We had hoped that Prince Charles had retreated from his position on modern architecture, but he singlehandedly destroyed this project." Rogers claimed it was the third time the future king played a role in shutting down one of his projects, claiming Charles had also had a hand in the cancellation of his designs for, among other structures, the Royal Opera House.

According to a just released BBC documentary to mark his 70th birthday, the prince recently said he will stop "meddling" in architectural issues when he becomes king.

The televised 1994 interview with Jonathan Dimbleby, a well-known British journalist, was all but the final nail in the coffin of the Wales' troubled union. When asked if he had been "faithful and honorable" during his marriage, the prince answered "yes," then paused and added this kicker—"until it became irretrievably broken down, us both having tried."

The program, which aired on BBC and was done to mark the 25th anniversary of his investiture as Prince of Wales, was intended to show to a more human and warm side of Charles, but roundly backfired when the heir to the British throne publicly admitted that he had committed adultery.

Charles also said that he was not considering a divorce from Diana and but added, he did not believe a divorce should prevent him from becoming King. The prince also insisted there was "no truth" to the rumors he was having an affair with Camilla Parker Bowles and described her as "a great friend" whose support he valued.

The next day, The Daily Mirror expressed the overwhelming sentiments of the British people in an editorial which read, in part: "He is not the first royal to be unfaithful. Far from it. But he is the first to appear before 25 million of his subjects to confess." And for more juicy royal drama, Here's the Secret Story Behind Diana's Famous "Revenge Dress."