The most shocking, surprising, and unexpected revelations in the book.

Pamela Anderson first became a Hollywood tabloid sensation 30 years ago—thanks to a sex tape, semi-nude magazine covers, and a miniseries she inspired—and she's lived to tell the tale. And tell it she does, in her upcoming memoir Love, Pamela. She shot out of obscurity in the early '90s with Baywatch and became one of the biggest stars on the planet, a status only amplified by her marriage to Motley Crue drummer Tommy Lee and the (unintentional, they say) release of a sex tape shot on their honeymoon.

Three decades, three marriages, and two children later, Anderson can't step outside without a camera following close behind, and Love, Pamela aims to give the gawking crowds some context. Read on to find out more about five of the most shocking, surprising, and unexpected revelations in the book, which will be released on Jan. 31 in conjunction with a Netflix special.

1
The Only Time She Was in Love

Tommy Lee and Anderson married in 1995 and divorced three years later. He's the father of her two sons and co-star of the infamous sex tape that set the template for every ultimate celebrity reveal since. Their dramatic union even inspired the recent miniseries Pam & Tommy.

But Anderson speaks of her marriage to the heavy-metal hellion with tenderness. "My relationship with Tommy may have been the only time I was ever truly in love," she writes. "We had fun and our rule was no rules."

Anderson says the couple's private intimate video was stolen from a safe in their garage and turned into the blockbuster celebrity sex tape. She says it also destroyed their marriage. "It ruined lives, starting with our relationship — and it's unforgivable that people, still to this day, think they can profit from such a terrible experience, let alone a crime," writes Anderson, who says she's never watched the explicit footage.

"The divorce from Tommy was the hardest, lowest, most difficult point of my life," Anderson writes. She says that in 1998, she and Lee got into a confrontation as she held seven-month-old Dylan, with older son Brandon nearby. "Tommy ripped Brandon off me and threw me and Dylan into a wall," she writes.

She called police; Tommy ultimately served six months in jail for the assault. Divorce followed. "I was crushed. I still couldn't believe that the person I loved the most was capable of what had happened that night. We were both devastated, but I had to protect my babies." Today, however, the two "check in, every once in a while" in their capacity as co-parents.

In addition to Lee, Anderson married three more times—to Kid Rock, Rick Salomon, and Dan Hayhurst—but claims she experiences more romance after the last divorce. "I live a more romantic life now that I'm alone than I did in relationships," she writes.

"l light my candles, have my music playing. I have my piano, I'm sure it would be lovely if someone else was in my life and wanted the same thing but I've just never met them. It's usually about catering to them, and there has to be a balance." 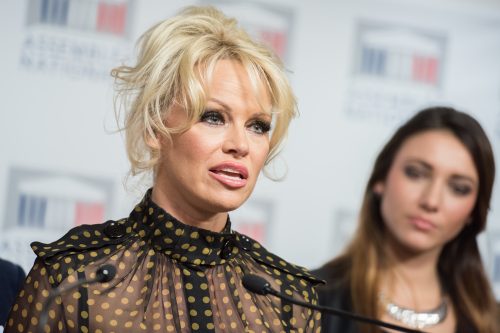 Anderson writes that she experienced sexual abuse as a child, and posing for Playboy was about empowerment. "I think about divine timing," Anderson told People magazine this week. "I needed to take my power back as a sexual being, as a woman. I remember looking at the pictures, thinking I still didn't like them but they're okay. And then I thought, 'Well, I really flipped the script.'"

"On one hand I was vulnerable," she said, "but I also felt how could it be any worse than where I was? And if I have a choice with my own body, I'm going to take it. I'm going to choose for myself."