This Is Why Everyone's Mad at LOFT Right Now

The popular clothing store's latest change to its apparel line has customers incensed.

Clothing stores have been hit hard by the pandemic, with foot traffic to brick-and-mortar locations diminishing amid coronavirus fears. According to the U.S. Census Bureau's "Shopping Trends in 2020" report, clothing and clothing accessories stores saw sales dip a staggering 28.5 percent—greater losses than even those seen in the restaurant sector. And while many clothing companies are doing anything they can to woo back consumers, LOFT just slashed the size of its customer base—and its former shoppers are fuming. Read on to discover what decision has LOFT customers threatening to quit shopping with the company for good. And for more major missteps from big names, This Is Why Everyone's Mad at Burger King Right Now.

The company is facing scrutiny after announcing its decision to limit plus size offerings. 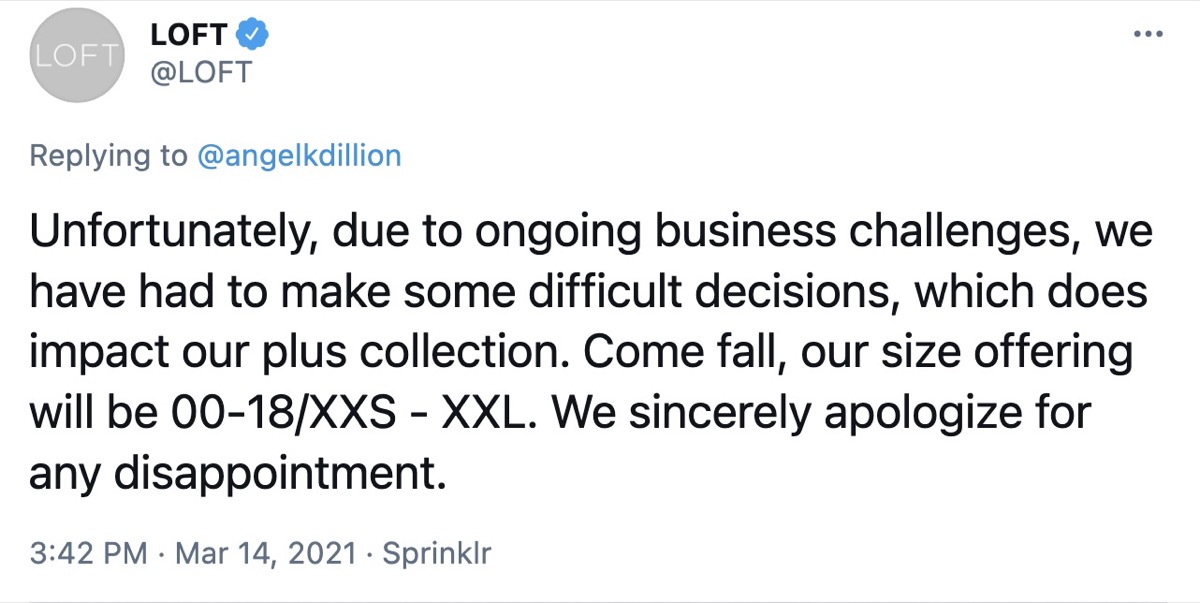 On March 14, LOFT, the division of Ann Taylor that's become a shopping destination for workwear and casual apparel, announced that it would be cutting a number of plus sizes from its range of garments, RetailDive first reported on March 15.

After being asked by a Twitter user whether or not the rumors about LOFT eliminating its plus size line were true, the brand confirmed that they were. As of fall 2021, the brand announced, LOFT clothing would come in sizes 00-18 and XXS-XXL, eliminating sizes 20-26 from its offerings.

And for the latest retail news delivered straight to your inbox, sign up for our daily newsletter.

The brand only introduced its plus size line three years ago.

The plus size women's retail market is estimated to reach $696.71 billion by 2021, according to Allied Market Research. However, it wasn't until 2018 that LOFT decided to tap into this valuable market.

"We also have petites, and we have maternity, and we have a tall assortment, and there's absolutely no reason not to go and do plus," Laura Jacobs, LOFT's senior vice president and chief marketing officer, told Glamour at the time.

And for more stores that aren't winning over customers, This Store Has the Worst Customer Service in America.

Former LOFT shoppers have taken to social media to express their outrage over the decision.

A social media backlash quickly followed LOFT's announcement, with many former fans of the brand accusing the company of being biased against larger customers. "Don't *apologize.* Get back in your meeting room and figure out how to include women of all sizes at your company," wrote one Twitter user. "You could've cut the massive offerings you have for petites, but we all know why you won't do that … Even when we know plus-size markets are lucrative your prevailing fatphobia is gross," wrote another.

Best Life reached out to Sycamore Partners, which owns LOFT, for confirmation and for a comment in regards to the backlash.

This isn't the first time LOFT has been the subject of body-image controversy.

At the start of 2015, LOFT found itself at the center of a body-shaming controversy after posting a video to the company's Facebook page in collaboration with the women behind YouTube channel #hotmessmoves. The video, which was part of a series with the motto "Just say no to New Year's resolutions," shows a woman frantically exercising with her body wrapped in plastic wrap. When confronted about the behavior by her roommate, the woman explains, "There's a…it's a wedding."

The video, titled #desperatemeasures, was intended to be a spoof showing why "your best resolution for 2015 should be: stay exactly the same." But the message didn't come across that way to commenters on Facebook, who were quick to decry the video, calling it "disgusting," "predatory," and "despicable." It prompted many to announce that they would no longer be shopping at LOFT stores. In a statement, LOFT told Today at the time that the video was taken out of context. "We teamed up with the comediennes of #hotmessmoves to create a series of videos on LOFT.com, which prove your best resolution for 2015 should be to stay exactly the same, because you're perfect just the way you are," a spokesperson said. The controversial video remains up to this day.

And for more brands in hot water, This Is Why People Are Now Boycotting Trader Joe's.

Sarah Crow
Sarah Crow is a senior editor at Eat This, Not That!, where she focuses on celebrity news and health coverage. Read more
Filed Under
Clothing Accessories • Fashion • News • Shopping
Read This Next
Latest News
Read This Next