The CDC Just Banned These Pets Amid Safety Concerns

The top health agency is concerned that bringing in these animals from abroad could spark an outbreak.

For most pet owners, it's hard to imagine life without their animal companion. And no matter if it's a trusty turtle, cute kitten, or beloved bird, our non-human friends usually find a way to become a special part of the family. But because of a developing health concern, the U.S. Centers for Disease Control and Prevention (CDC) has just announced that it will be banning certain pets in the coming weeks. Read on to see which animal the agency is prohibiting.

RELATED: If You Live Here, Prepare for More Sharks Than You've Ever Seen Before.

The CDC is temporarily banning imported dogs from more than 100 countries amid rabies concerns.

In a statement on June 14, the CDC announced that it would be temporarily banning the import of dogs from 113 countries that it has classified as high risk for dog rabies. The new policy, which goes into effect on July 14, also prohibits all dogs from entering or re-entering the U.S. from any country if they've been in any of the nations designated as high-risk in the past six months.

"This temporary action is necessary to ensure the health and safety of dogs imported into the United States and to protect the public's health against the reintroduction of canine rabies virus variant (dog rabies) into the United States," the agency said in its statement. "Rabies is fatal in both humans and animals, and the importation of even one rabid dog could result in transmission to humans, pets, and wildlife."ae0fcc31ae342fd3a1346ebb1f342fcb

The ban is the result of an increase in falsified rabies vaccination documents from abroad.

The agency says it put the forthcoming ban in place due to changes in policies abroad and certain impacts from the pandemic. "There has been a significant increase in the number of dogs that are being imported and presenting fraudulent or falsified rabies vaccination certificates," Emily Pieracci, a veterinary medical officer at the CDC, told Reuters. "Given the impact that COVID has had on these vaccination programs around the world, we're not really sure what our rabies landscape is going to look like in the future."

According to estimates from the CDC, six percent of dogs that come into the U.S. from other countries arrive from places considered to be at high risk for dog rabies. The list includes China, Russia, Colombia, India, Brazil, India, Kenya, Peru, and the Dominican Republic.

RELATED: If Your Dog Is Playing With This, Take it Away Immediately.

There are specific exceptions to the dog ban for some animals.

After the ban goes into effect, anyone looking to bring a canine into the U.S. from another country will need to apply for a special permit, the CDC said. The special exceptions will apply to some American citizens returning home after living out of the country with their dogs and those with disabilities in need of a service animal. However, the ban will not exempt new pet adoptions, puppies, or dogs used as emotional support animals in the permit process.

"I think it is important to stress that this is a temporary suspension. We recognize that this is not the long-term solution," Pieracci told CNN in an interview, who also predicted that the initial suspension is likely to last for 12 months.

"This is not going to affect most people that want to travel with their dogs," Pieracci said. "We are animal lovers. We support people wanting to import dogs from overseas, but we really want to make sure that it's done safely. This is not our end goal. We don't want this to be the permanent answer." But, she added, "we do need some time to figure out a better system so that we can make sure that rabies is not re-introduced into the United States."

The ban was also made for the well-being of dogs stuck trying to enter the U.S. 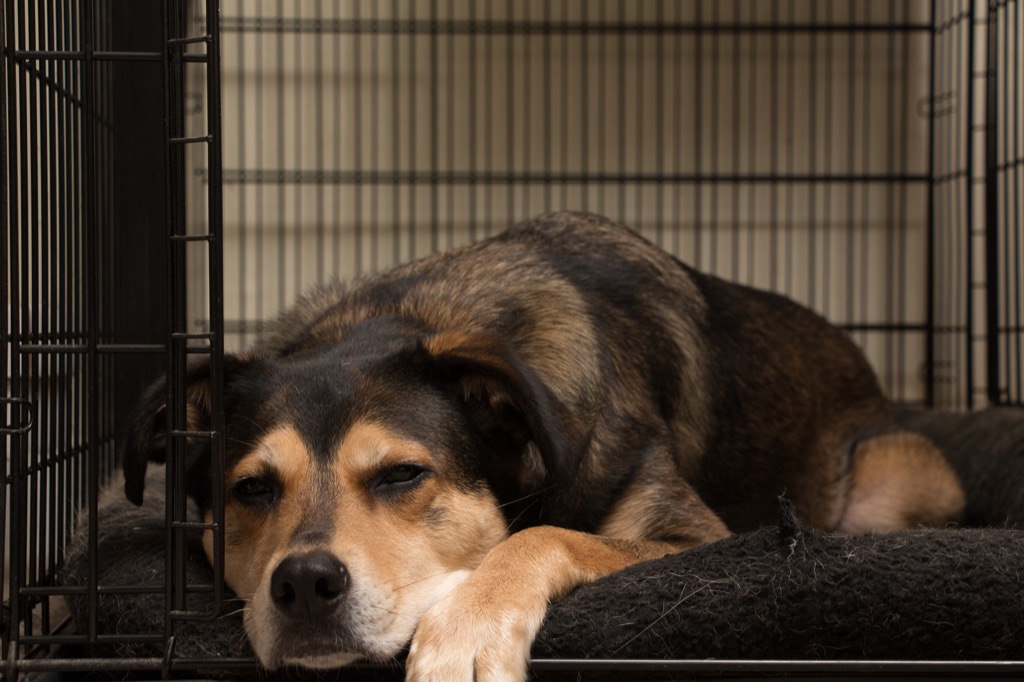 The CDC says the temporary ban was also put into place after a surge in pet importations in 2020 was met with logistical roadblocks brought on by COVID-19. "The pandemic created an unsafe environment for dogs," Pieracci told CNN.

Due to a reduced number of flights operating internationally and a decreased number of employees at airports, dogs were often stuck for long periods of time in their crates while awaiting processing. "Some of them have been housed in airline cargo warehouses for prolonged periods of time leading to illness and in some instances death of the dogs," Pieracci told Reuters. "We want people to be able to import dogs—but want them to do it safely."

RELATED: This Is the Most Aggressive Dog Breed, New Study Says.