19 Oscars Dresses That Cost More Than Your Car

These are the most expensive gowns ever worn to the Academy Awards.

The Academy Awards are like the Super Bowl of style. The Oscars are when Hollywood elite gather in Los Angeles to honor the best of the best in movie-making. But the awards show has also come to be about the dresses—the most expensive dresses, to be precise.

The world's most exclusive designers clamor to dress Oscar attendees so they'll say their name as they strut down the red carpet. And one way to ensure they get a lot of attention is to make an incredibly pricey ensemble. So, we've gone back over the years to find the most expensive dresses the Oscars have ever seen. Get ready to count down to find out whose Oscar dress was valued at $4 million! 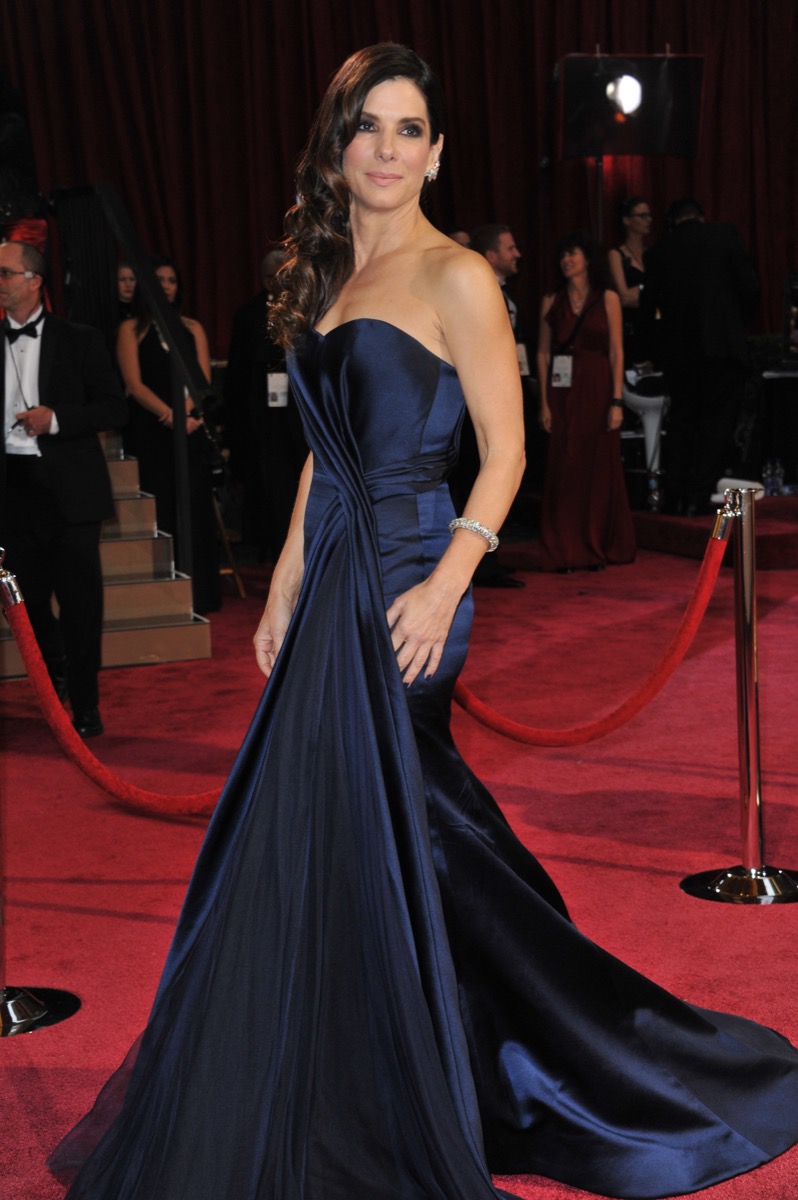 Gravity won numerous awards at the 2014 Oscars, but its star Sandra Bullock didn't snag the coveted Best Actress trophy for her stellar performance. That said, she turned heads in her navy Alexander McQueen gown with a sweetheart neckline and drool-worthy draping that cost an estimated $40,000, according to Style Caster.

When Saoirse Ronan was nominated for Best Actress at the 2016 Oscars for her work in Brooklyn, she strutted her stuff in an emerald Calvin Klein number that was valued at $60,000, according to Forbes.

"We wanted to create something youthful and sexy that would make her feel confident and beautiful," Francisco Costa of Calvin Klein told Vogue of the piece. "We chose the emerald green hue as a nod to both Saoirse's Irish heritage, as well as the film for which she is nominated." It's also, of course, the color of money. 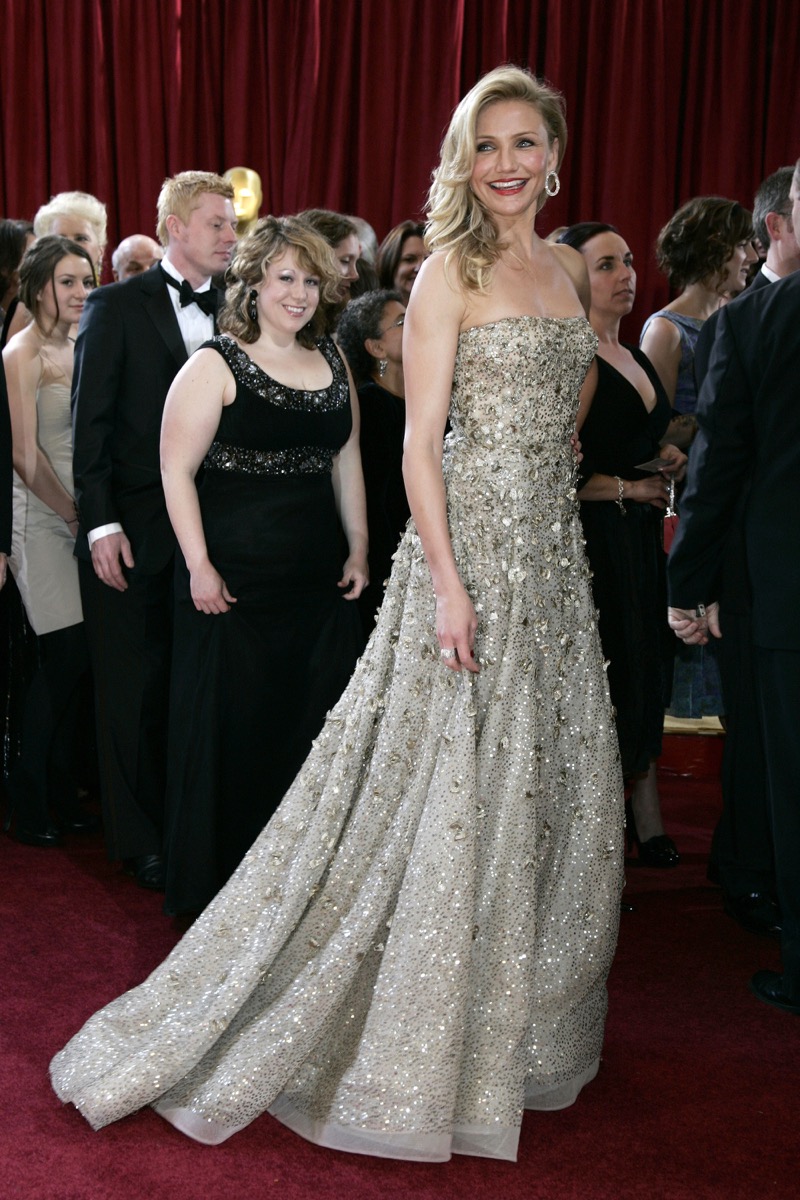 Cameron Diaz presented at the Oscars in 2010 and looked quite stunning doing it in a strapless Oscar de la Renta gown with champagne tulle and gold embroidery.

The dress, according to The Richest, also came with an impressive $62,500 price tag. 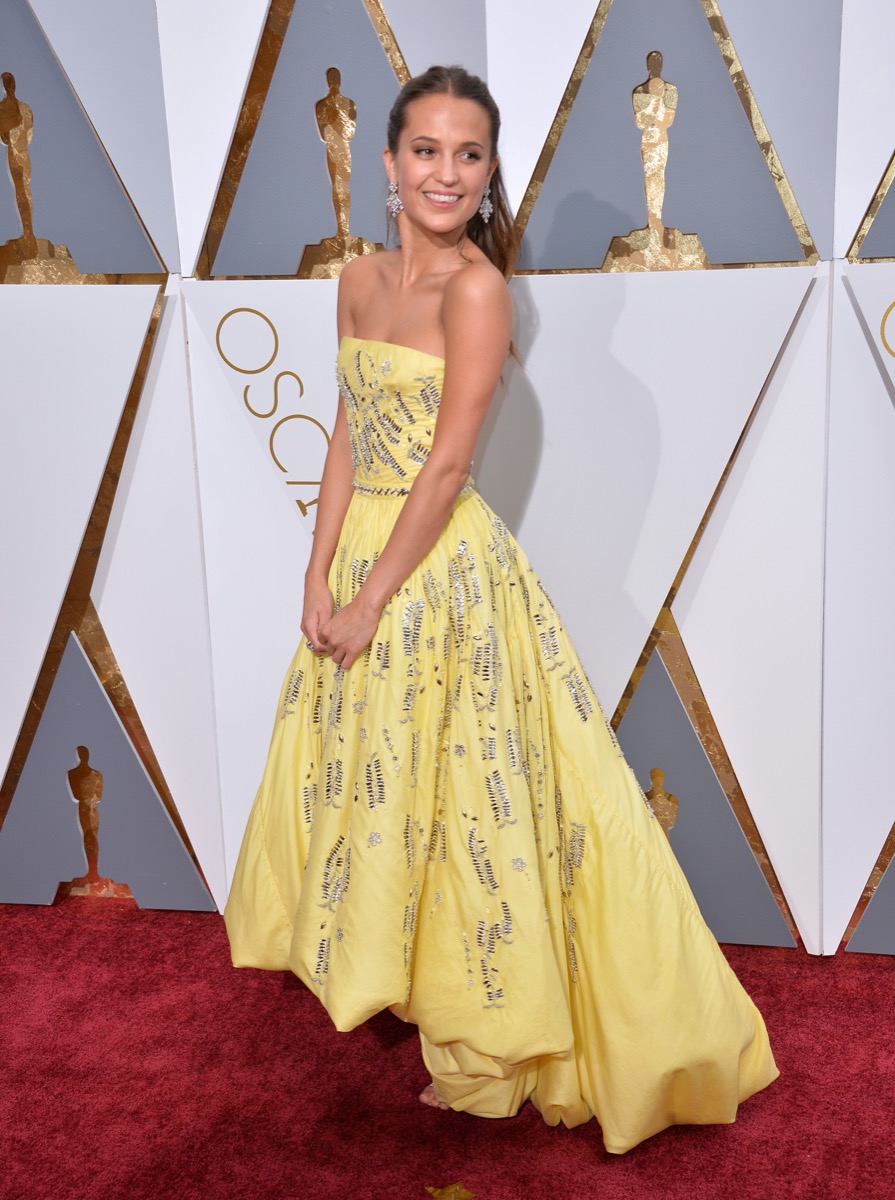 It was a big night for Alicia Vikander at the 2016 Oscars: She ended up walking away with the Best Supporting Actress trophy for her work in The Danish Girl.

For the grand occasion, the Swedish actress opted for a chic yellow $80,000 Louis Vuitton gown, according to Forbes.

Jennifer Lawrence wore Christian Dior to the 2014 Oscars, where she was nominated for American Hustle. Though she didn't win, her simplistic red Dior gown was queen of the carpet.

At the 2011 Oscars, Anne Hathaway was a nominee and a host. Celebrity stylist Rachel Zoe dressed Hathaway that year and called the opportunity to choose eight dresses for the show "the ultimate fantasy for both of us."

Yes, Hathaway wore many different outfits throughout the evening, but the one she wore on the red carpet was the priciest. Her red Valentino number was worth a cool $80,000, according to Vogue. 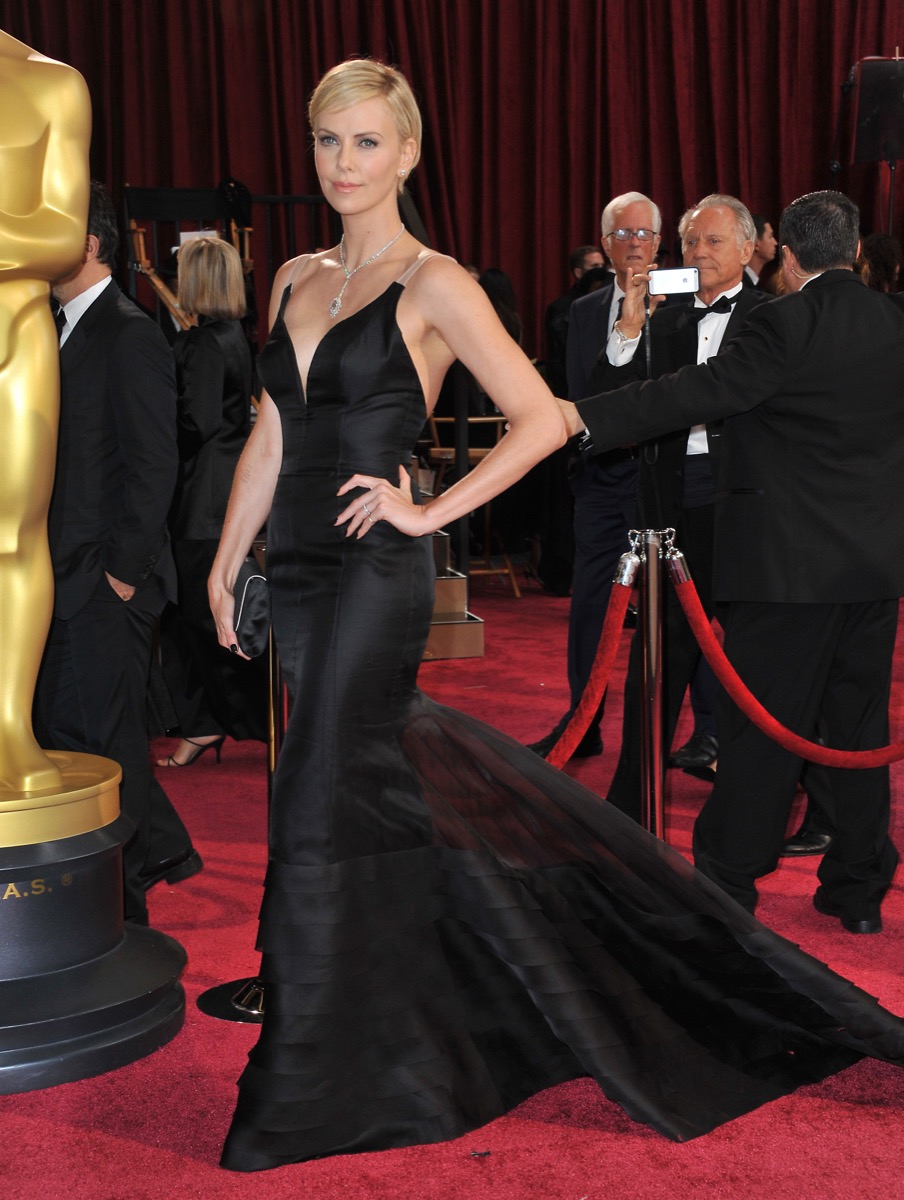 Charlize Theron attended the 2014 Oscars as a presenter and she donned Dior for the big night. Her dress, made of black satin and organza with a deep sweetheart neckline, was valued at $90,000, according to Style Caster.

But Theron has worn more expensive dresses to the Oscars, as you'll soon see.

While accepting the 2001 Best Actress Oscar for her role in Erin Brockovich, Julia Roberts rocked a black-and-white Valentino gown. The actor and her gown both earned their place in awards show history since the latter has an estimated $95,000 value.

In 2017, Roberts revealed to People that she kept the gown in a box under her bed so that she could give it to her daughter, Hazel, one day. 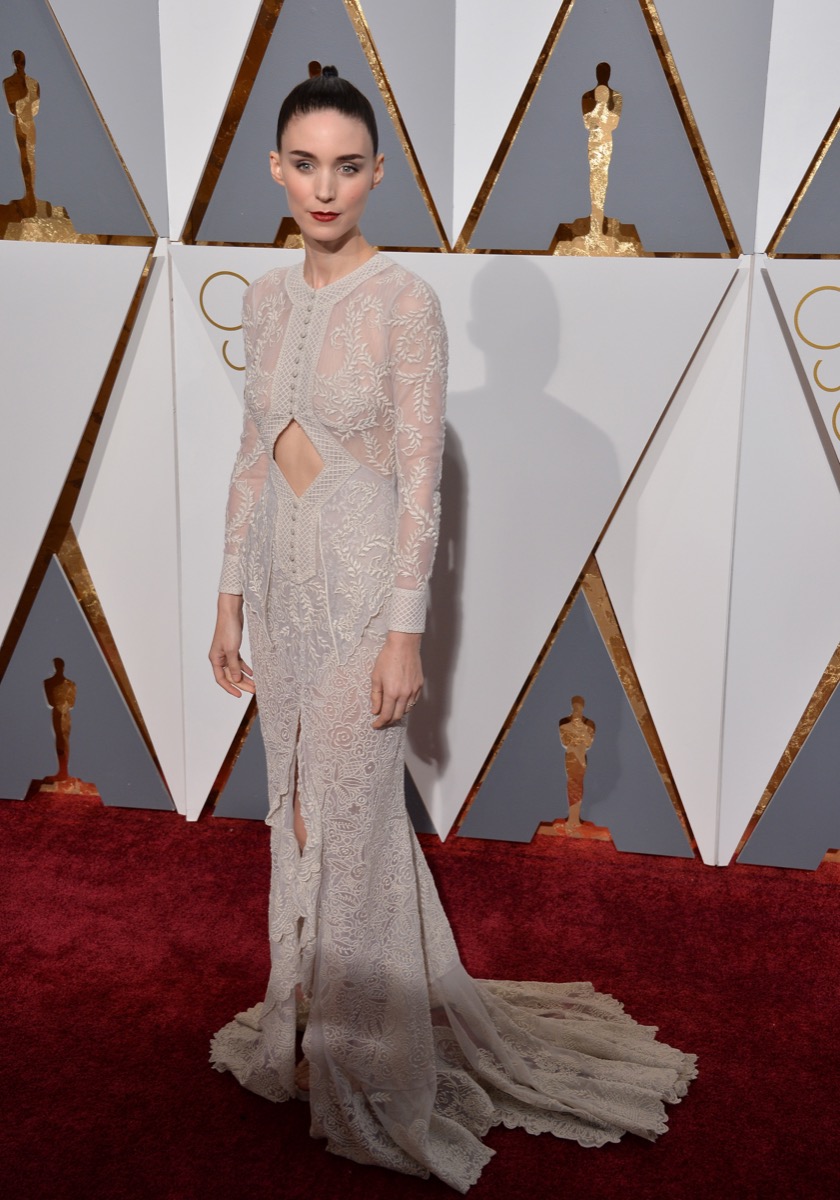 She may not have taken home the 2016 Oscar for her work in Carol, but you can't say that Rooney Mara didn't look like a winner when she stepped out wearing this Givenchy stunner.

The lacy white number with Gothic details wowed with its peek-a-boo cutout and high slit. And of course, its alleged price tag of $100,000, Harper's Bazaar reports. 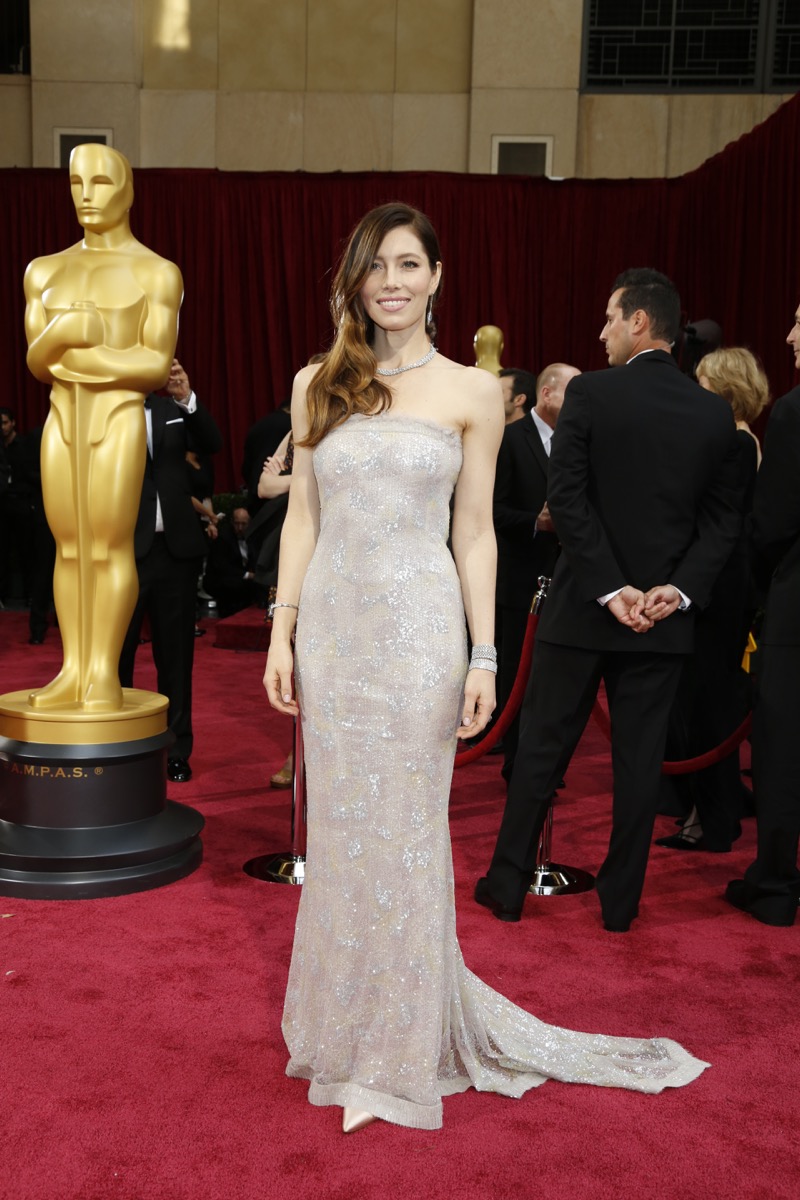 Jessica Biel wore a beautiful Chanel dress to present at the 2014 Oscars. She stood alongside Jamie Foxx to award the winners for Best Original Score and Best Original Song and looked great while doing it, especially considering the gown was valued at $100,000, according to Vogue. 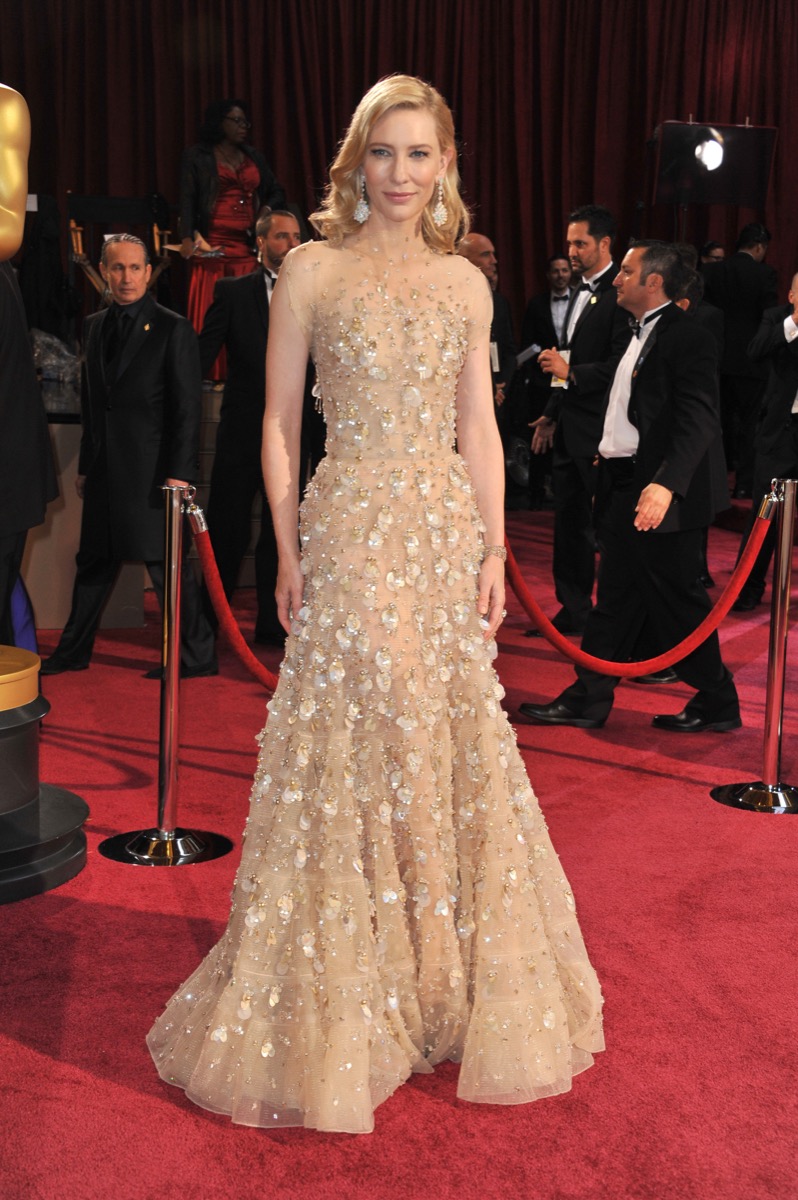 At the 2014 Oscars, Cate Blanchett won the Best Actress Oscar for Blue Jasmine. She opted for an Armani Privé gown, which, according to to The New York Times, was worth $100,000. That number, though, is nothing compared to her 2007 dress.

Theron joined Dustin Hoffman onstage at the 2013 Oscars to present. In her white Dior gown with a deep-V bodice, an embellished peplum, and a floor-sweeping train, she looked like a million bucks. Well, at least 100,000 bucks, according to Marie Claire. 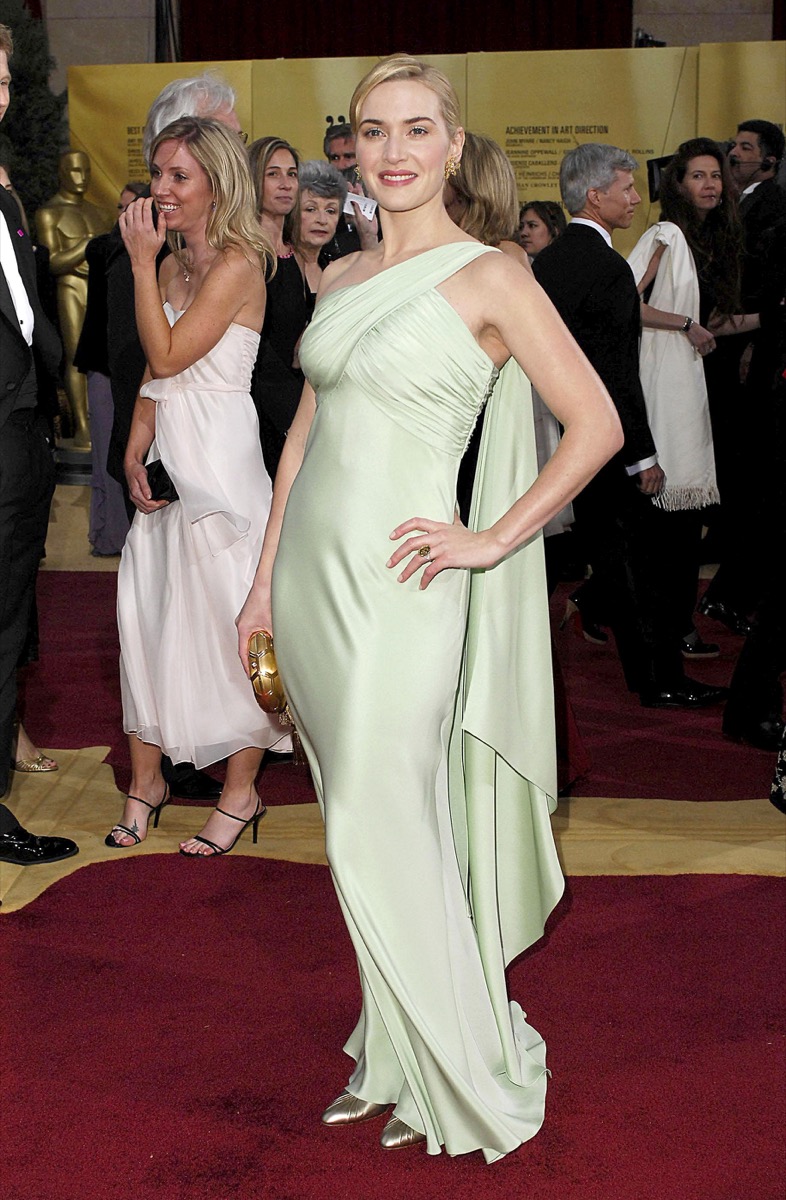 Kate Winslet had a little help picking out this mint-green Valentino creation when she was up for a 2007 Oscar for her work in Little Children.

Her daughter, Mia, actually assisted in choosing the silk ensemble, with Winslet telling reporters: "One day maybe she'll borrow this and play dress-up in it." But with a price tag of $100,000, according to Vanity Fair, that seems unlikely. 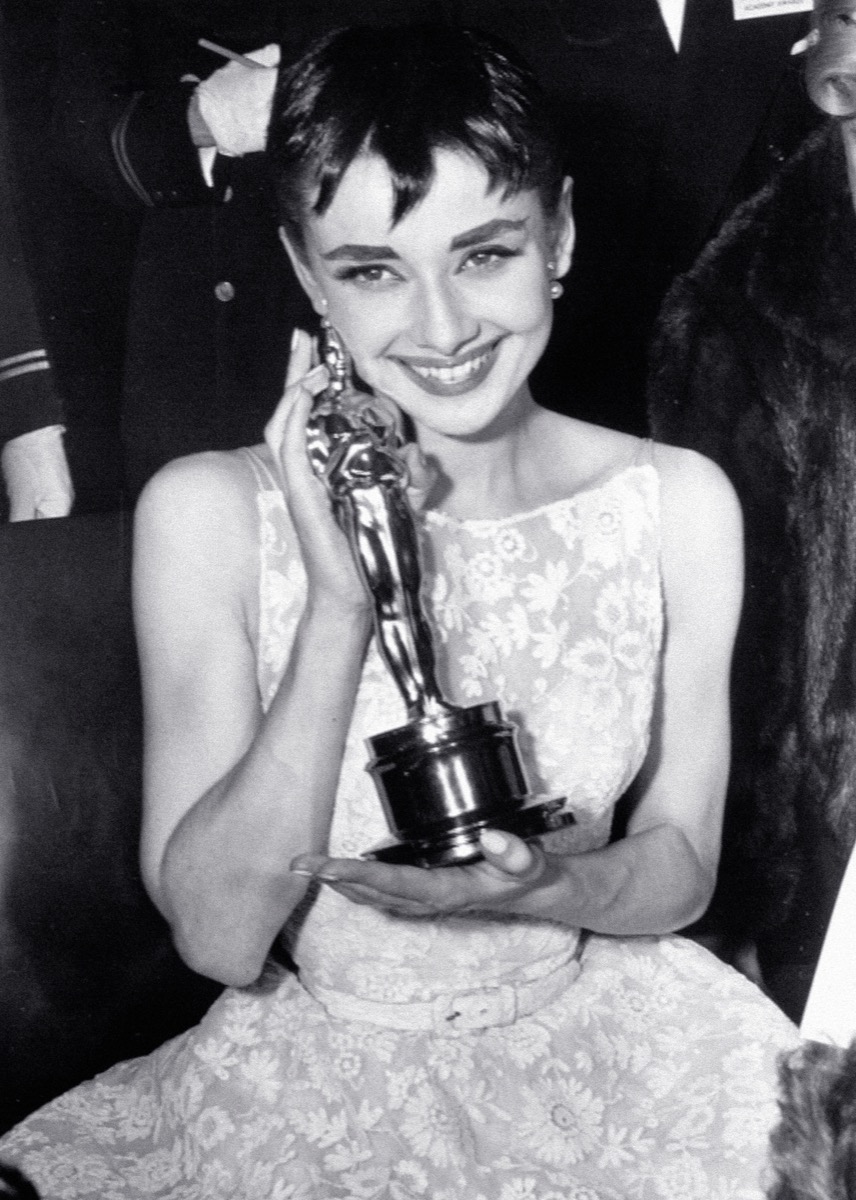 Audrey Hepburn wore a version of this gown in Roman Holiday. But her Givenchy floral number for the 1954 Oscars, with a boat neckline and white belt that cinched the waist, rocked the red carpet.

Hepburn won the trophy for Best Actress thanks to her work in that iconic movie and her mom later said she referred to the outfit as her "lucky dress."

Fresh off an Oscar win the year prior for 12 Years a Slave, Lupita Nyong'o was back as a presenter at the 2015 ceremony.

This time, the actress wore a Calvin Klein gown made of 6,000 pearls. Nyong'o called her wardrobe choice "a timeless and priceless piece of art." But it turns out, you could put a price on the gown.

After the biggest night in Hollywood, the dress, which TMZ reports was worth an estimated $150,000, was stolen. Nearly a week later, the gown was returned because the thieves allegedly learned the pearls were fake.ae0fcc31ae342fd3a1346ebb1f342fcb 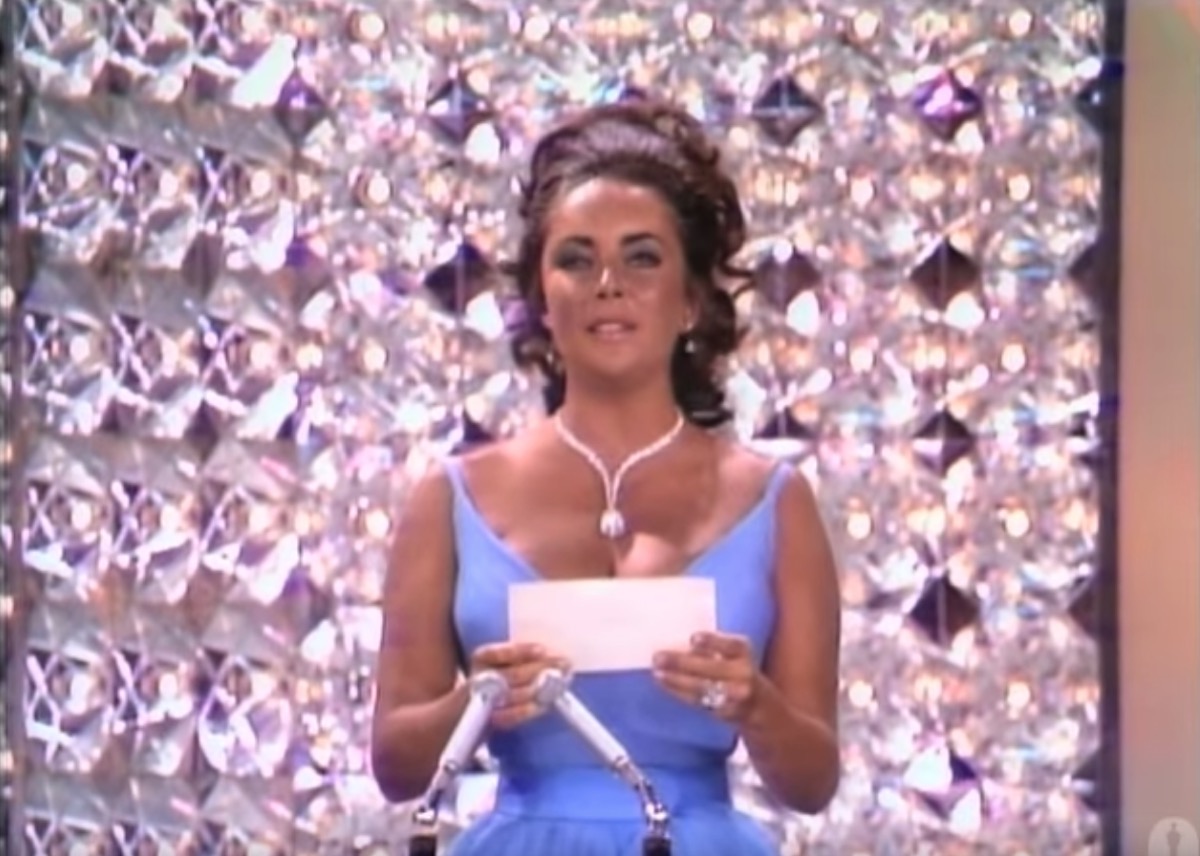 Elizabeth Taylor had the honor of presenting the award for Best Picture at the 1970 Oscars ceremony, but all eyes were on the legendary actress and her low-cut periwinkle chiffon gown. In one of Taylor's last interviews, she listed this piece specifically as one of her favorites from her very fashionable career.

Costume designer Edith Head designed the gown, which was auctioned off in 1999. Mattel—the makers of Barbie—paid $167,500 for it at auction, according to People. 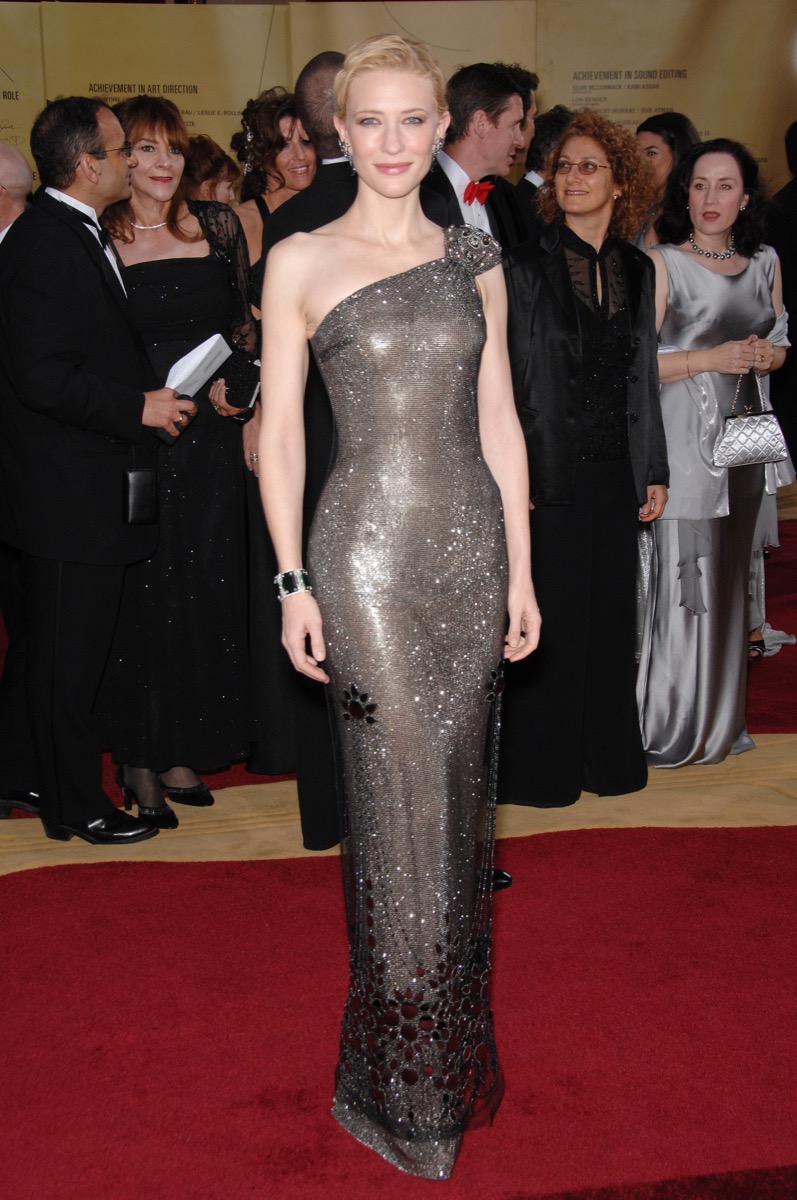 Though she didn't win the Oscar for her work in Notes on a Scandal in 2007, Blanchett certainly did look like a trophy in a gunmetal Armani Privé gown.

This one-shoulder piece—which is valued at a whopping $200,000, according to Harper's Bazaar—is covered with Swarovski crystals. 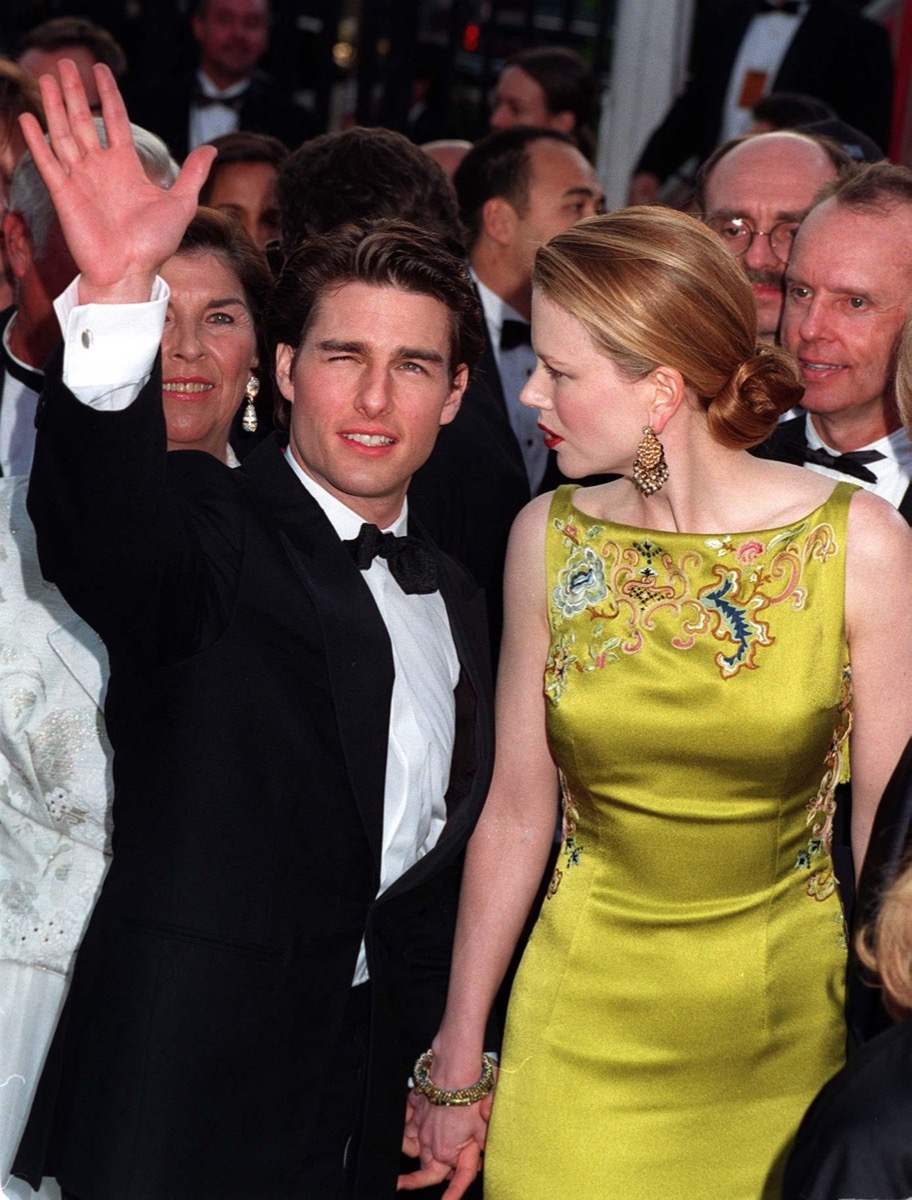 Nicole Kidman attended the 1997 Oscars with her then-husband Tom Cruise, who was nominated for Jerry Maguire. But everyone was talking about her that night.

The Aussie actress was reportedly paid $2 million, according to the New York Post, to rock this chartreuse Dior dress with Asian-inspired embroidery by John Galliano. "John made it for me, and I love it," Kidman told The Hollywood Reporter at the time. At that price, who wouldn't? 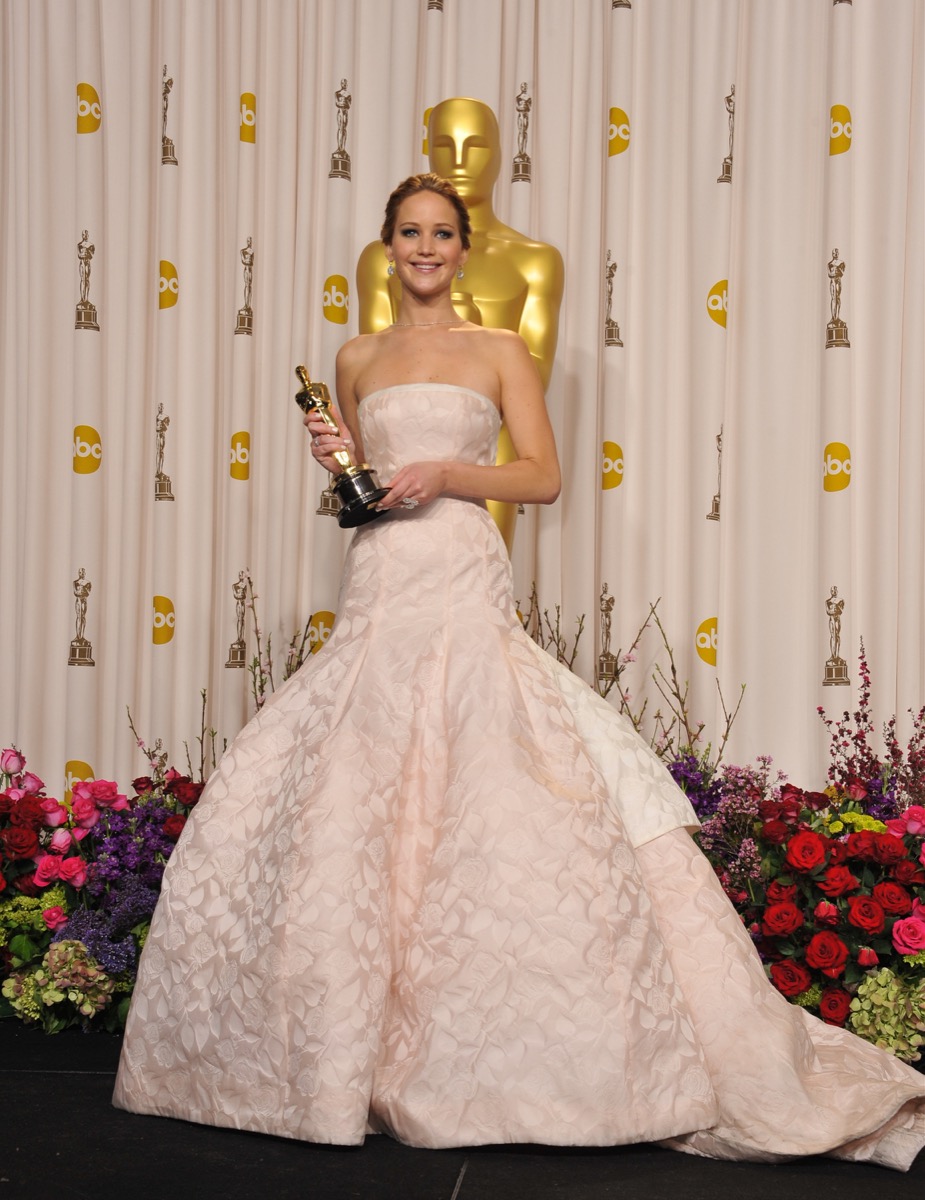 This gown is probably worth more than your cars, your home, your savings, and then some.

In 2013, when she won the Best Actress Oscar for Silver Linings Playbook, Lawrence also donned a Dior gown. But the reason this dress has so much value is because she famously fell up the stairs as she went to collect her award—and that extra airtime increased its worth.

According to a report by Kantar Media, the average cost of a 30-second advertising spot during the 2013 Oscars was $1.65 million. So, as Reuters explains, Lawrence "had more than 75 seconds of solo camera time. For a commercial spot of the same duration at the same time, Dior would have had to pay more than $4 million." And if you want to laugh at more awkward Hollywood moments, then check out 30 Most Awkward Celebrity Awards Show Moments.