The 8 Most Beautiful Dog Breeds, According to Experts

These good-looking breeds have "best in show" written all over them.

Deep down, most people know there's something uniquely lovable about each and every dog. Sometimes, it's their laidback and friendly demeanor. For others, it can be how poofy their coats can get. And some dogs can even make us love them even more just by being a little funny looking. Still, there's no denying that certain types of dogs have the kind of regal and majestic looks that make them stand out. Read on to discover the eight most beautiful dog breeds, according to experts.

READ THIS NEXT: The 10 Most Unique Dog Breeds, According to Pet Experts.

While some dog breeds may get noted for their athletic build or unique physical traits, others get praised for their luxurious fur.

"Samoyeds have a thick, luxurious coat that makes them one of the most beautiful dog breeds," Daniel Caughill, a canine expert and co-founder of The Dog Tale, tells Best Life. "They were bred as sled dogs in some of the coldest parts of the planets, which means they're hardworking, energetic, and love to play in the snow."

Certain types of dogs have found themselves idolized for their looks for millennia. This includes one breed that has endeared its way into becoming the companion of some of the most legendary rulers in history.

"The Saluki's beauty has been a thing of wonder for thousands of years," says Travis Brorsen, a pet expert for Animal Planet, celebrity dog trainer, host of My Big Fat Pet Makeover, and judge on the Discovery Plus series The Dog Games. "It's a member of the hound group and is one of the oldest dog breeds in the world. This sighthound was a favorite of kings, ancient pharaohs, and even Alexander the Great."

But beyond their looks, Salukis have managed to stay impressive by present-day standards. "They have agile bodies that make them great at sprinting," says Caughill. "Salukis are affectionate and loyal and are great for families."

READ THIS NEXT: The Dog You Should Have Based on Your Zodiac Sign.

As arguably one of the best-known dog species, the German Shepherd hardly needs an introduction. Its sharp features and imposing stature have made it practically synonymous with strength and security. And according to experts, it's not just their appearance that stands out.

"Made famous in the U.S. by the Hollywood hound, Rin Tin Tin, this stoic beauty is known for its life-saving abilities in search and rescue, bomb detection, and service dog work," says Brorsen.

"Loyalty, courage, and confidence are just a few of the German Shepherd's attributes," he adds. "Although they are very versatile in their abilities, they can become very protective of their loved ones—sometimes to a fault."

As the old saying goes, beauty is in the eye of the beholder. But according to experts, beauty can also be in the eye of whoever is holding the hair clippers at the grooming salon.

"While it may not be everyone's cup of tea, the Standard Poodle is the quintessential fancy dog and is a breed that's well known for its beautiful, and extremely varied, grooming styles," says Georgina Ushi Phillips, DVM, advising veterinarian and writer for NotABully.org.

"In fact, there are dozens and dozens of styles just for the standard poodle ranging from the classic lion cut to the much fancier cupcake cut and everything in between," she adds.

READ THIS NEXT: 5 Low-Maintenance Dogs You Barely Need to Walk. 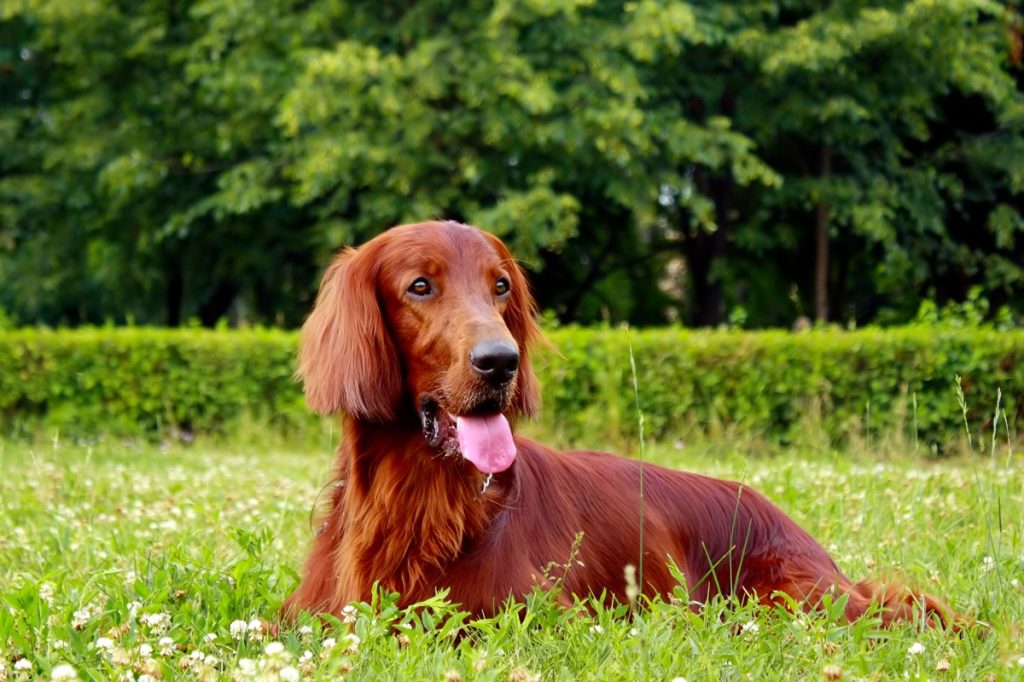 Different breeds' coats can run the gamut from frizzy and fluffy to practically non-existent. But one dog's sleek build and luxuriously long locks have made it a perennial favorite on the dog show circuit.

"The Irish Setter is often referred to as the 'rambunctious redhead,'" says Brorsen. "They are well known for being great with families, especially small children. Just remember—they require patience when training and have a gentle demeanor, so positive reinforcement is a must."

Like the German Shepherd, Rottweilers are often first seen as symbols of strength and protection—especially when they're put to use in that line of work. But experts say this brute strength can make it easy to overlook the subtle beauty of the powerful dogs.

"While many other breeds are known for their long lines and elegance like the Saluki, the Rottweiler is beautiful in a different way with strong limbs and a boxy but still beautiful frame," says Phillips. "The Rottie doesn't have as many color variations as some other breeds, but their classic black and brown pattern is still beautiful with its simplicity."

Weimaraners are a unique breed for their eye-catching, otherworldly natural coloring that almost makes them appear like vapor. Combined with their trademark light eyes, their appearance stands out as one of the most praised among experts.

"Known as the 'grey ghost,' the Weimaraner was kept a secret by the German aristocracy until it arrived in the U.S. in the 1920s," says Brorsen. "President Eisenhower, movie star Grace Kelly, and artist William Wegman were all beloved owners of this intelligent and energetic pup."

Not all pups need to be large or imposing to be considered regal and luxurious. One fun-sized breed is renowned for its looks and pugnacious attitude.

"The Papillon—French for 'butterfly'—is a member of the toy group," explains Brorsen. "But don't let the long hair fool you: This single-coated pup requires minimal grooming, is one of the most intelligent breeds, and one of the most competitive canines in agility trials."