Thank these guys for the resulting yard sales—and nothing else.

In 21 states, adultery is illegal. And in five of them—Massachusetts, Idaho, Oklahoma, Michigan, and Wisconsin—it's a straight-up felony. In fact, Michigan will dole out up to four years in the slammer for prosecuted offenders. Still, these strict laws don't seem to deter men from cheating. (Yes, men indeed do the bulk of cheating. As revealed in recent General Social Survey data, 20 percent of men have admitted to extramarital affairs, while only 13 percent of women have.) And while many guys are busted thanks to relatively small errors—a rogue email or a text, a pair of underwear left behind, et cetera—there are plenty of men out there who have seen their cheating ways come to light in spectacularly dumb fashion.

For instance, have you heard about the guy who got outed by Burger King? Or what about the one who spilled the beans while on live radio? Yes, these—and even more outrageous instances—have all actually happened. And we've gathered them all here. So read on, and thank your lucky stars you've been lucky enough to dodge these insidious fellas. And if you're looking for info on why all these dudes are circumventing the law (and their lovers' feelings), learn the 10 Biggest Reasons Why Men Cheat.

1
The guy who carried on an affair with his girlfriend's coworker. 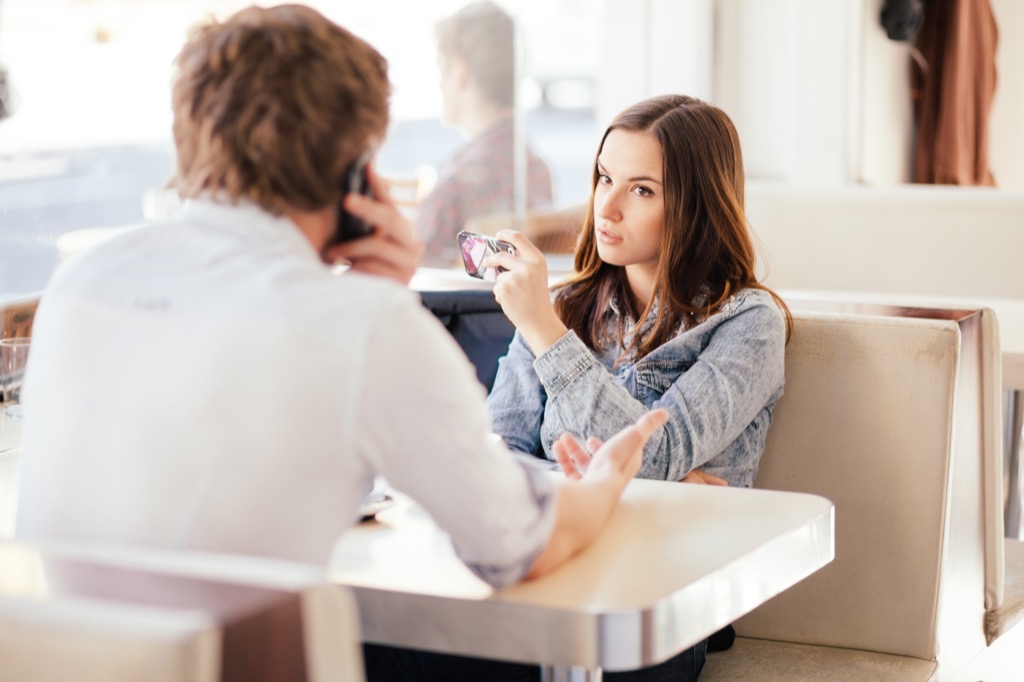 According to a wildly viral Twitter thread (30,000 retweets and counting) from user AyanaTheDiva, her boyfriend had been carrying on an affair with her new coworker—for a year. Here's how she found out. Ayana had recently started a new job, alongside an unnamed coworker. They started talking about respective boyfriends. When the coworker whipped out Instagram to show off pictures, Ayana was shocked to learn that, whoops, they had the same boyfriend.

2
The guy who outed himself on live radio. 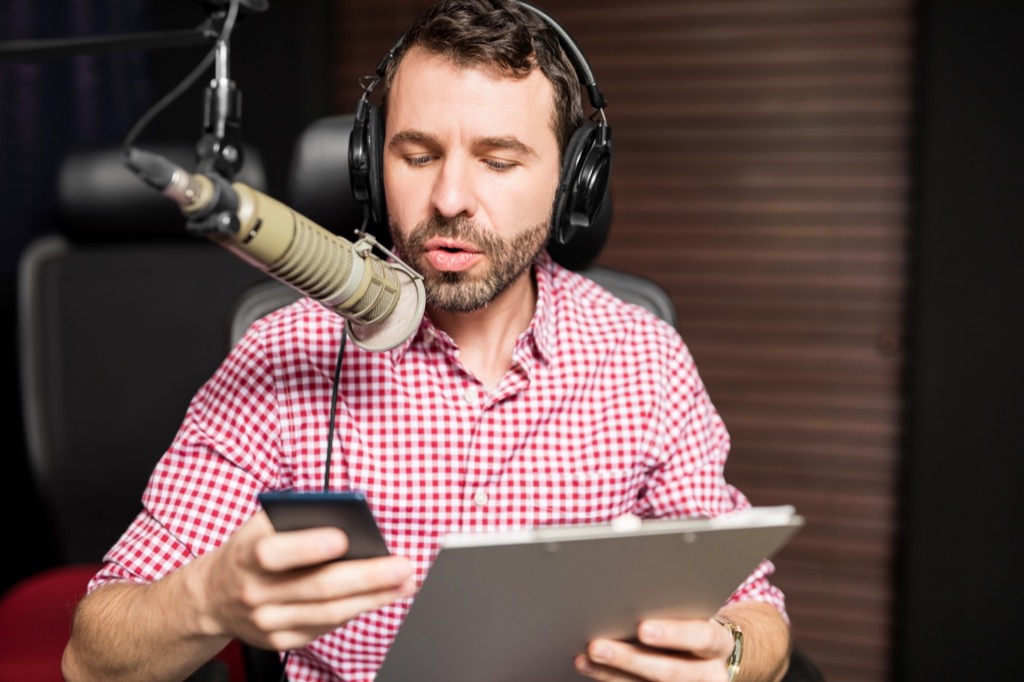 On an episode of The Niall Boylan Show, on Ireland's 4FM radio station, a guy named "Dave" admitted to cheating on his fiancée. His justification: he wasn't sexually satisfied with the relationship. Apparently, this ticked off the fiancée's friend, who recognized the guy's voice, called into the show, and outed him on the spot. And for more on infidelity, learn what micro-cheating is—and if you're doing it.

3
The guy who went on a wild ride.

As reported by French newspaper La Figaro, one (unnamed) man filed a $47 million lawsuit against Uber for revealing his infidelity, citing a glitch in the system. Here's what happened: He logged into Uber on his wife's phone for a single ride. But, after logging out, the app still sent notifications to his wife's phone. Apparently, he had been regularly traveling to a clandestine location to meet his tryst. His wife decoded the gambit—and filed for divorce. Next, learn the age when men are most likely to cheat.

4
The guy who wasn't photo-shy. 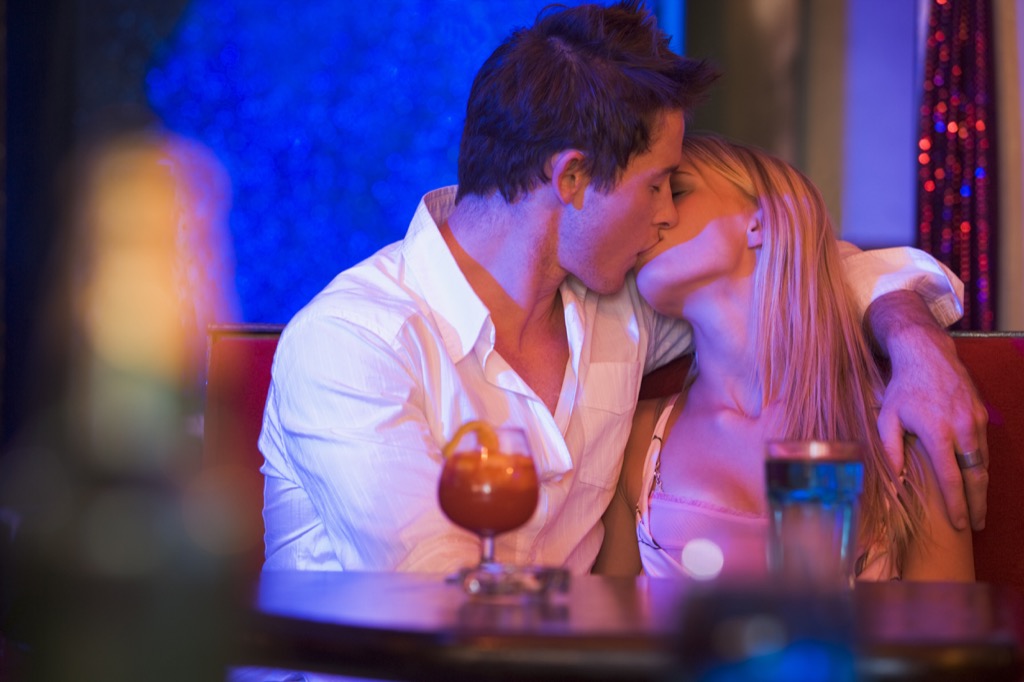 5
The dad who couldn't gamble.

We're taking this with a grain of salt (and you should, too), but it's so beyond the pale, it needs to be shared. In a widely spread viral text chain, a father, seemingly out of nowhere, informs his son of their home's security camera lock code. "Why would I need to know that?" the son responds.

"I thought you might want to delete the videos of you and Julia having sex," the father says.

"What about the ones of you and mom's yoga teacher?" the son asks, before extorting his father for $1,000 and a new car.

6
The guy who got caught in a whopper of a lie.

Instagram user jordan_vonsmith86 commented—and shortly thereafter (you'll see why in a second) deleted, though not before screenshots burned up the Internet—on Burger King's official account, "My girl legit took 20 minutes ordering in the drive thru last night, those whoppers were worth it tho lol [sic]."

The guy's actual girlfriend chimed in to say she doesn't recall eating dinner at Burger King—and that she doesn't even like the (objectively delicious) establishment in the first place. And for more 21st century romance, learn the 20 Online Dating Terms Older People Don't Know Yet.

7
The guy who didn't turn his phone off. 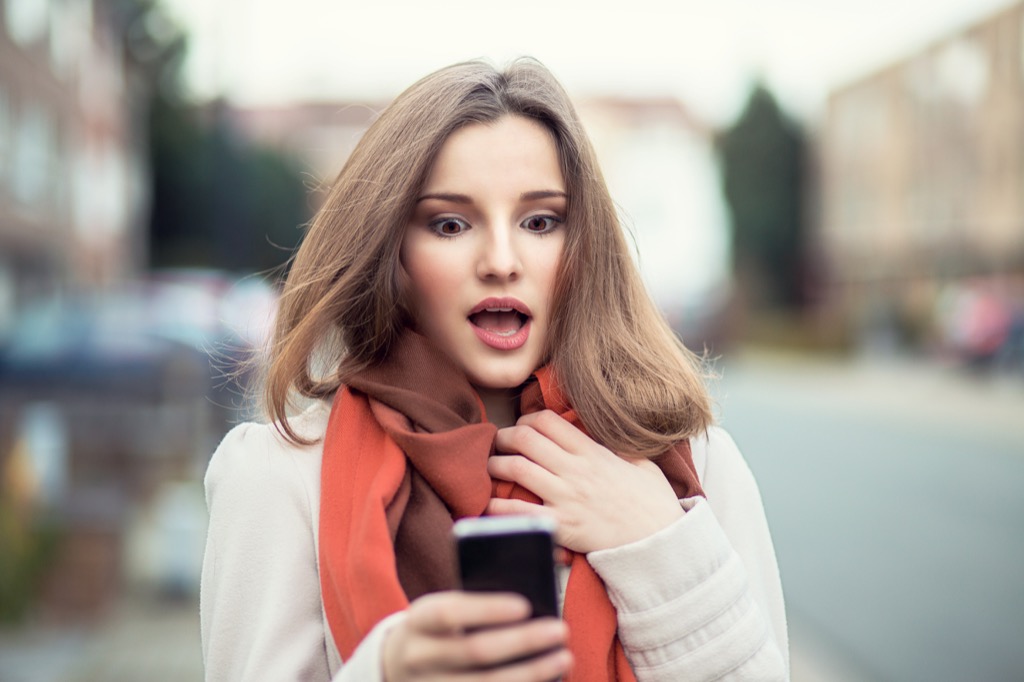 One British man, as reported by Metro, had a habit of hiring sex workers. Unfortunately, during one such rendezvous, he mistakenly called his fiancée… mid-deed. If you want to prevent this from happening to you, learn the single best way to stop pocket dialing people for good. (Or you could, you know, not cheat.)

8
The guy who didn't understand iMessage.

From Chentazi, via reddit: "My ex-fiancée had both an iPhone and a Macbook. If you know anything about iMessage, this means that he can send and receive texts from his laptop. I was using his laptop for homework (with his permission) while he was at work.

He got a text message from his ex, who he talked with on a regular basis. I was uncomfortable with her since she was 'the one that got away,' but she was married and he insisted he just thought of her as a good friend and I chose to believe and trust my then-fiancee. But the text she sent him that day seemed strange, just randomly saying "Just texting to say I love you" or something like that, and it just popped up in the corner for me to read. I opened the messages.

I found hours of sexting messages. Hours. He'd been sexting her that morning even, when I had slept next to him all night and we'd cuddled and kissed goodbye when he went to work. I wasn't home when he returned."

9
The guy who didn't pay attention to the "ship to" field.

One woman discovered her husband's infidelities thanks to pure carelessness. As revealed to BuzzFeed, the guy ordered his secret girlfriend a new credit card. Thing is, he mistakenly had the card shipped to his house. The wife surreptitiously filed for a missing spouse divorce and "accidentally" had the decree sent to her husband's office. 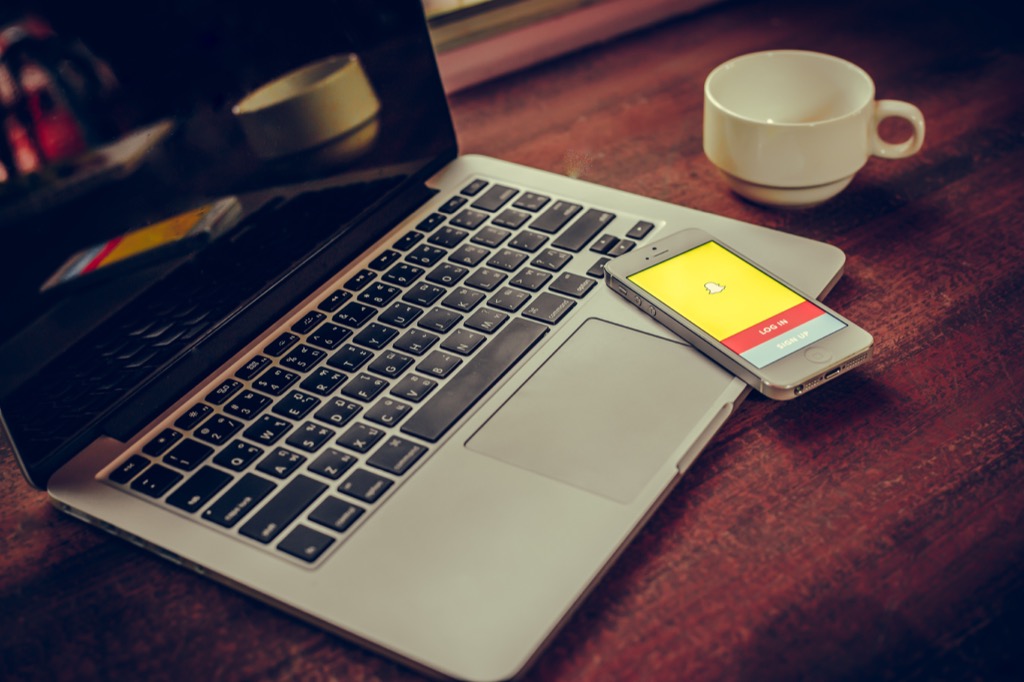 An Ohio State University known as "AJ" tried to pick up a fellow student via Snapchat. "Won't your girlfriend be mad if she finds out?" the girl asked, before posting AJ's feeble flirting attempts in the school's public channel. The chat quickly devolved into a school-wide vindication crusade—seemingly every student named AJ demanded the cheater's name be made public, to prove their individual claims of innocence—before blowing up into a bona fide Internet meme, garnering Snapchats from as far away as Mount Everest. And for more infidelity of this sort, learn the 20 Social Media Habits That Are Technically Cheating.

11
The guy who showed up at his partner's work.

One guy was dating a woman who worked at Disney. (Rides galore!) He asked her for free tickets to, according to BuzzFeed, "take his little sister." The woman turned out not to be his sister. Guess who the couple ran into?

12
The guy who pretended he was with a sex doll.

In this viral video, posted to Facebook, one jilted woman walks in on her partner hooking up with another woman. When confronted, he alleges that the other woman is just a sex doll. And for her part, she stands impressively stock-still and silent for some time—until the first women moves to touch her.

13
The guy who shared keys (and dated) his neighbor, and cheated anyway. According to Kanorado1, via reddit: "I was dating my neighbor, and his door was 10 feet away from my front door. One night, I had some friends over and he went out with his friends. My friends and I had some Nerf guns at my apartment, and my guy friend shot me in the eye and scratched my cornea. It was so painful. I didn't know what to do. It was pretty late at night and I had been drinking, so I decided the best thing to do was to take some allergy medicine and fall into a Benadryl coma.

I woke up the next morning and was in so much pain. I couldn't open my eye, and crying made it burn, which made me cry more. So, I ran over to my boyfriend's apartment, let myself in (we had copies of each other's keys) and, as I was going up the stairs to his room, I kept thinking, 'Hm, women's shoes! How weird.' And, 'I wonder whose pants those are!' But I was so set on having him drive me to the emergency room or something so I just busted into his room and there he was, in bed with his best girl friend. They hadn't heard me come in, so I just stood there for an uncomfortably long time."

14
The guy who suddenly started grooming.

From agoodliedown, via reddit: "His pubic hair was trimmed."

15
The guy who tried to juggle. 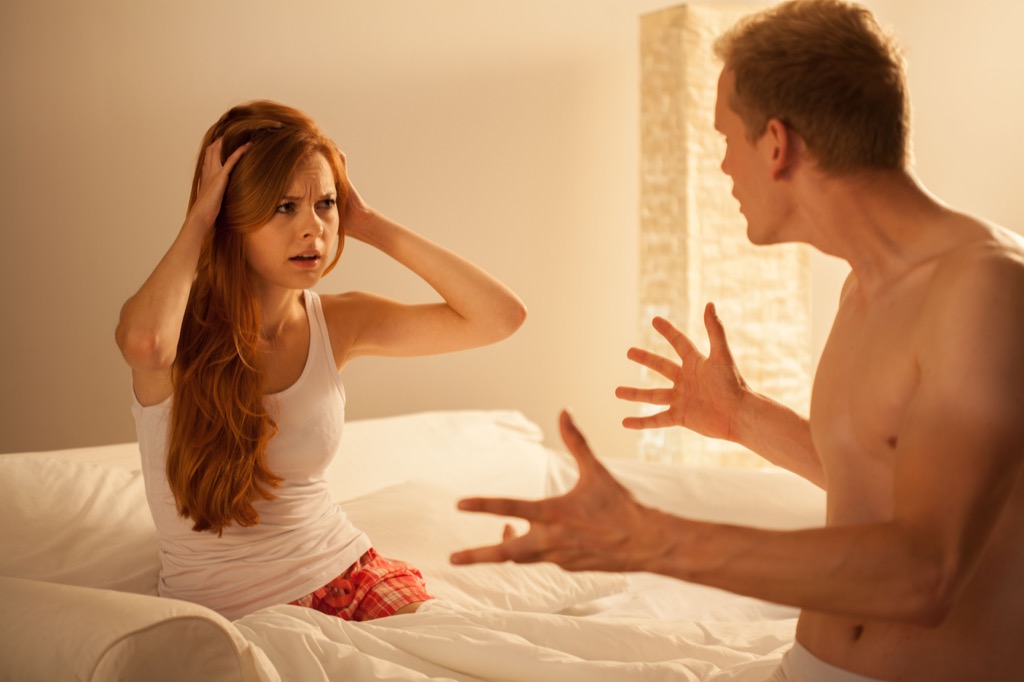 One guy thought it'd be a good idea to carry on two separate long-term relationships in tandem. (Fact: this never works out.) The whole thing crumbled when, as recounted in a now legendary Twitter thread, from ashedryden, one woman found out, called the other, and both left him. Ashe put it best: "I didn't think this [stuff] happened in real life."

16
The guy who got caught via Google Maps. 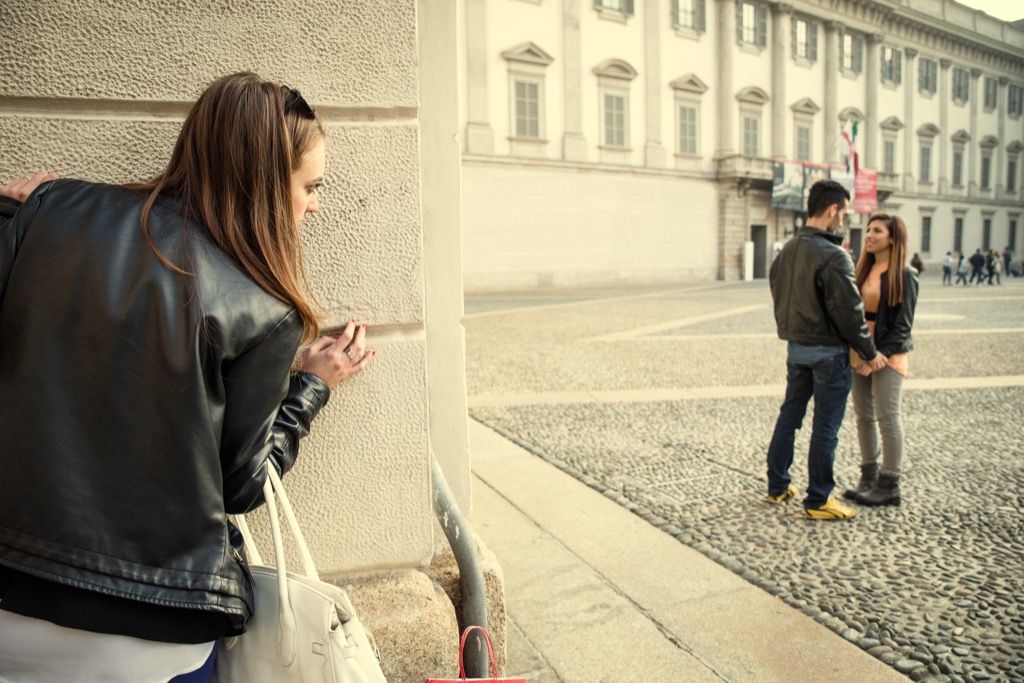 As reported by Express, a Russian man was caught by his fiancée as she was scrolling through Google Maps "street view" function, wherein you can can look through photo-captured renderings of real-world locations. In one shot, the guy was spotted canoodling with another woman.

17
The guy who used Tinder at the wrong time.

From 84th_legistlature, via reddit: "He cheated on me while I was right next to him, setting up other dates with girls on his phone."

Ari Notis
Ari is an editor specializing in news and lifestyle. Read more
Filed Under
Cheating
Read This Next
Latest News
Read This Next