Don't let these simple errors ruin your chances at love.

We all know the story: You've seen someone's online or dating app profile and you like what you see. Now it's time to suss one another out, to see if they're more than just a pretty face. You send a message or two, and wait for a response—but the response might never come. Those first poetic little messages will make or break your conversation, so it's imperative you get it right and don't make painfully simple mistakes.

Based on my conversations with a professional dating adviser and several female friends who are users of a dating app, it's clear that a sloppy barrage of messages can undo all the work you put into your profile in almost no time. Here are some things to bear in mind when you're playing virtual footsie with a beautiful stranger. Avoid these errors at all cost, and don't forget to first make sure your profile passes muster: Here are the 12 Biggest Dating-Profile Blunders Men Make.

1
Showing that you have no grasp of grammar. 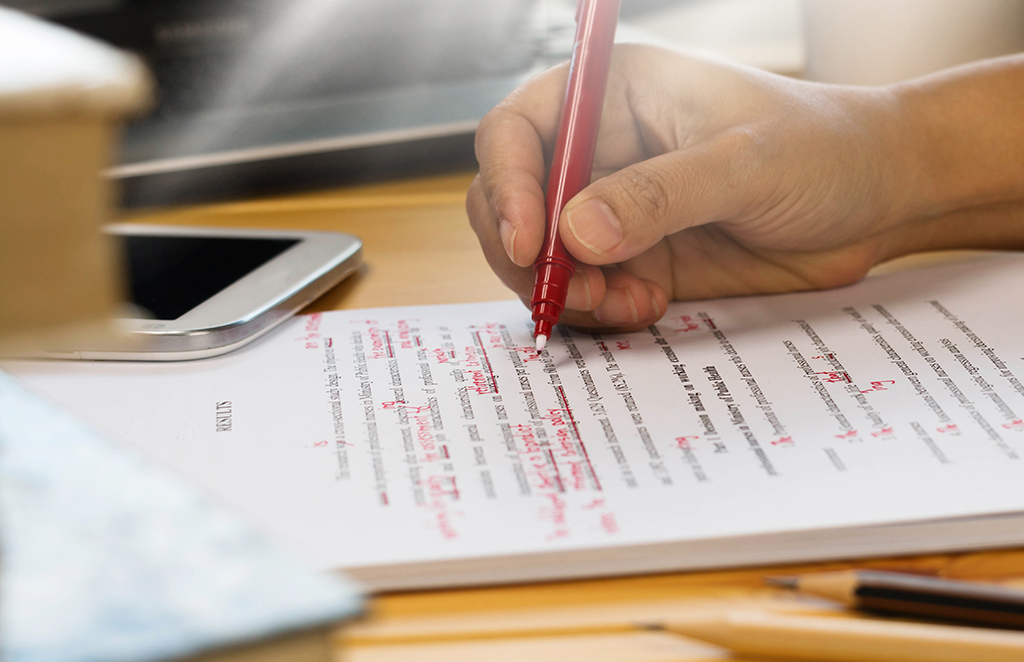 Yes, it's easy to send a typo when texting back and forth—especially when you're having rapid fire conversations with multiple potential dates—but people are going to notice, and not in a good way. "Glaring errors can make you look careless or lazy," says online dating wingwoman Em Hammel of menaskem.com. If you have a problem with spelling and grammar, that's fine. But lucky for you, we live at a time in which there are plenty of tools that check errors and improve how we come across in our writing.

That said, you really ought to re-familiarize yourself with some common errors that might make someone think twice about responding to your message. After all, knowing how to use good grammar and punctuation is one of the 30 Life Skills Every Man Should Know.

2
Not striking while the iron's hot. 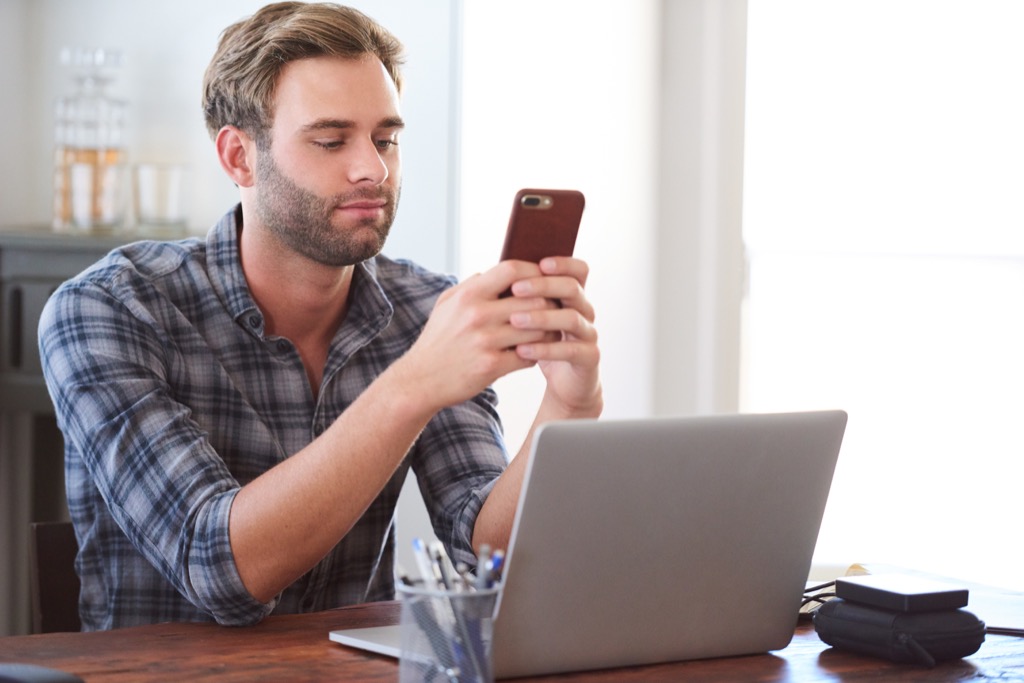 Internet apps are not for standing on ceremony, particularly if you match with someone on an app like Tinder. Message them straight away. With so much competition, people who do not respond quickly get overlooked or forgotten. According to Em, "When you dive right in and start a conversation, people are more likely to respond. If someone messages you first, try to message her back as soon as you can. If you do, you'll likely catch her in time to have a conversation while your profile is fresh in her memory." Once you do strike up a conversation, take the advice of the professionals and check out the 7 expert dating tips from Silicon Valley's top millionaire matchmaker.

3
Messaging while you're unavailable. 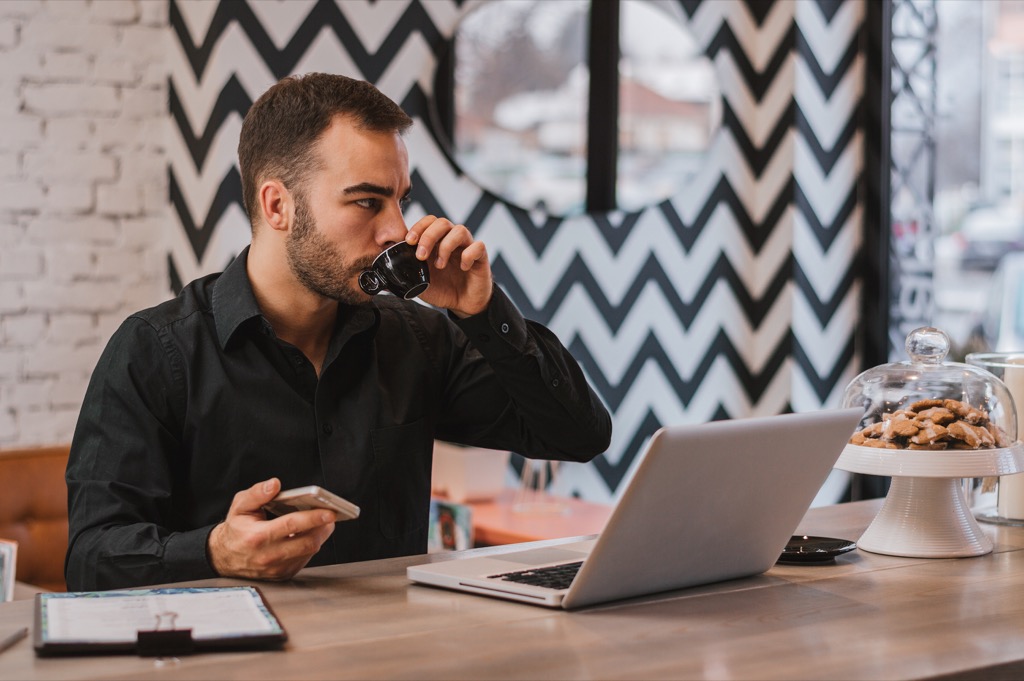 You've seen a woman that's pushing all your buttons, and then some. You message her because you're eager to make a connection, and things are going great. So great, in fact, that she expresses an interest in meeting up with you. The problem: You have an out-of-town wedding, then a business trip, then your parents are staying with you for a few days, and it's going to be a couple weeks before you're able to meet. Guess what? You probably shouldn't have messaged her in the first place.

While this note seemingly runs counter to the one before it, it makes perfect sense: It's not wise to start something you won't be able to pursue in person for a while. You run the risk of running out of messaging charm—or more likely, her attention will be taken be someone who's actually around. Luckily, apps like OkCupid allow you to keep track of people you like. Use features like this to ensure that a potential love match doesn't get lost in the shuffle; take care of your business, and then check back, since it's far better to initiate a chat when you're ready to meet. And speaking of OkCupid, it's one of the best dating apps if you're over 40 (but it's good for all ages, too, don't worry). 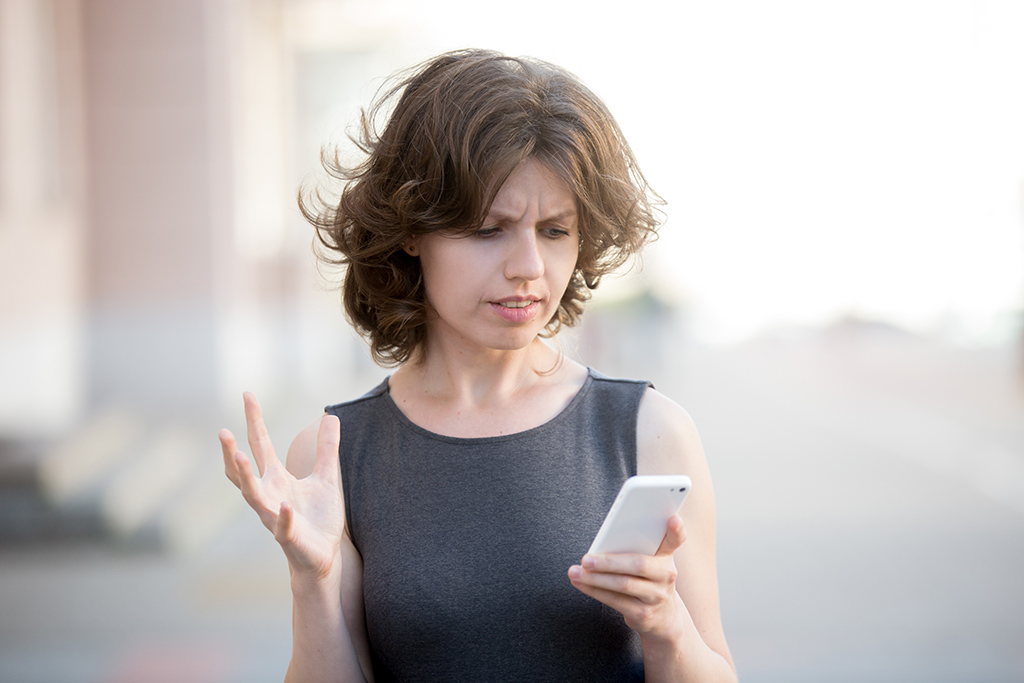 Dating app and site Zoosk did a little research on their users and happened upon an interesting truth: 87% of good-looking guys with compelling profiles were striking out with women because they were sending the same generic message to multiple people. We all know when we're getting a boilerplate email from a company that wants our business, and similarly, people can sniff out a little Control +C/Control +V action just as easily. From this, the folks at Zoosk concluded that while copying and pasting the same message to multiple women may seem like a good way to save time, it really doesn't pay off.

"Hey is for horses." Ever hear that quip from a grandparent when they overheard you using this most casual of salutations? Well, it's just as likely to provoke the ire of someone you're interested on going on a date with as it did with grandpa. It's lazy, it's generic, and it suggests that the amount of effort you put into anything is minimal. More research by Zoosk found that saying "hey" gets you 35% fewer messages.

A better tactic than saying "hey," "hi," "hello," "howdy," or "what's up?" is to dive right into something substantive, something that proves that you read their profile with some degree of care, something that points to common ground. For instance: "I don't really understand what's going on in Twin Peaks either! Think Cooper's going to wake up soon?" For more conversation starters that'll get you talking about your favorite shows and movies, brush up on The 15 Most Debated Movie Endings of All Time.

While saying a brief and generic "Hey" or "How's your Tuesday going?" is highly unlikely to intrigue her, going the other way and composing a very long and detailed message isn't much better. Be authentic, and hone in one thing she said in her profile that really resonated with you or a picture of a place that you've visited (or plan to), and build a fun, friendly, pithy first message around that. "Brevity is the soul of wit"—so said Polonius in Hamlet, and, if Shakespeare were checking over your OkCupid messages for you, he'd telleth thee the same thing.

7
Talking about her body.

Some people we polled—especially women—don't take kindly to initial messages that center on their body. "This sends the wrong message," agrees Em. "If the first thing a guy says to me is directed at my boobs, I assume that's all he's interested in. No thank you, sir." A much better approach is to focus in on your shared interests and ask her questions that will give you insight into her personality. "A sincere message that goes beyond the superficial will help you stand out," she says. Once you meet up in person for a date, though, genuine compliments never hurt: They're one of The 10 Sexiest Things to Say to Her On a First Date.

When a someone jumps straight to asking a person on a date without spending much time getting to know them, it conveys a cavalier attitude—or worse, desperation, like you'd be fine to get any warm body on a date. "When this happens, women assume this kind of guy doesn't care who she is, as long as she's available, with a pulse," says Em. You can prove you're more evolved than this by asking a girl about herself, her life, her job, and her interests before inviting her on a date. "This kind of conversation is really flattering to women, and men, too—it's nice when someone is actually interested in who we are, and not just what we look like," she says. This advice goes for when you meet in person, too: Don't do all the talking, fellas.

9
Being disrespectful or overly familiar.

"Online dating is intimidating for everyone. Respectful communication is key when you're first meeting and texting with someone new. Racial, political, or sexual statements will likely offend people," says Em. She continued, "… and a man who immediately references sex comes across like a sexual predator. Again: no thank you, sir!" Inappropriate language is just as bad as grammatical errors when it comes to alienating a potential date. Communicating respectfully is always important, but don't forget that there's also language that's inappropriate for your age: if you're over 40, here are 40 things you should never say (let alone text).ae0fcc31ae342fd3a1346ebb1f342fcb

With a few exceptions, people use a dating app with the intention of eventually meeting up with someone in real life. Em reminds us that apps like Tinder are all about impromptu meet-ups, and people who use them are generally not looking to have interminable message exchanges. "After a few fun text exchanges, go ahead and lock in a date," she says. "For example, you might say: 'Hey! I'm having fun chatting, want to do it in person this Thursday?' or 'Looks like we're both hikers. Before we hit a trail, want to meet over coffee?'"

11
Revealing too much too soon. 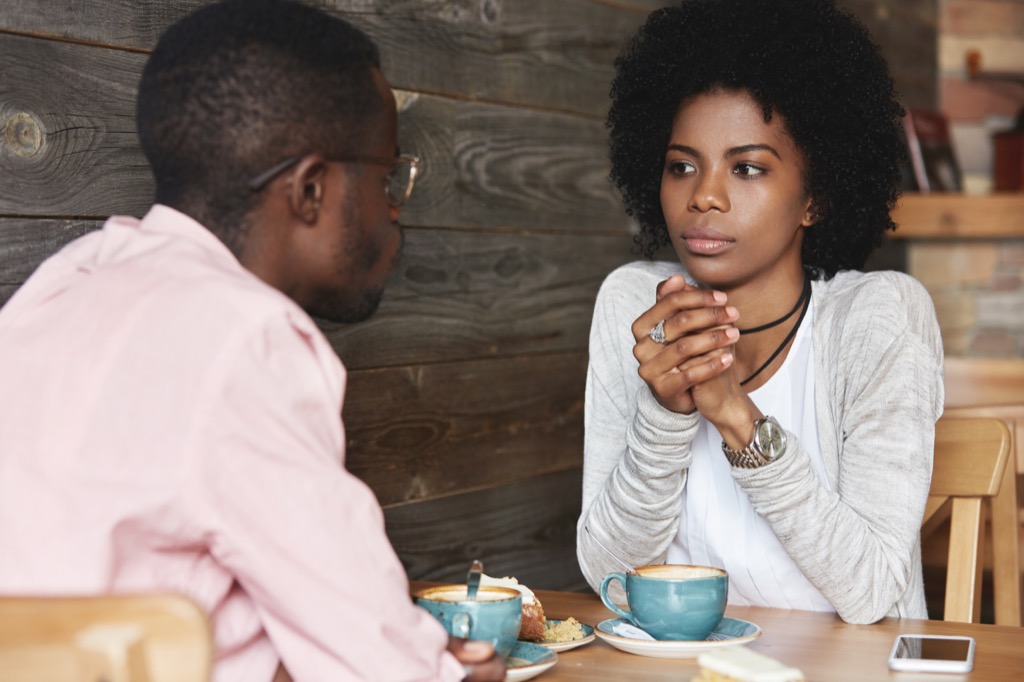 Transparency and honesty are (almost) always the best policy when it comes to interpersonal relationships. With that being said, Em points out that in the Tinder age, guys have a tendency to overshare when scheduling a date. "If you can't commit to a particular time because you're already going on a date with someone else, it's ok keep that to yourself!" she says. "Even though many people date around, most women don't like being told they have competition, and probably won't meet a guy if he tells them they're one of many people he's dating." If you're busy, simply tell her you have other commitments that night, and then propose another time you actually are free.

And if you feel like you're not making these mistakes but are still striking out, it might be that you're just not in the right city: Check if you live in one of The 50 Cities with the Worst Singles Scenes in America.