Costco Is Pulling These Products From Shelves in 2 States

You won't be able to purchase any of these items from the wholesaler if you live here.

Wholesale shopping is a unique experience, which may be why nearly 119 million Costco members in the U.S. cash in on the ability to shop in bulk and purchase exclusive products. You can purchase a year's supply of coffee during one shopping trip, or wait for the annual return of coveted (and criticized) seasonal items—all at an affordable price. But there are specific products that the warehouse club just confirmed will not be available for shoppers in two states to snag anymore. Read on to find out what Costco is pulling from shelves.

READ THIS NEXT: 8 Warnings to Shoppers From Ex-Costco Employees.

Items sold at Costco are a constant topic of discussion. 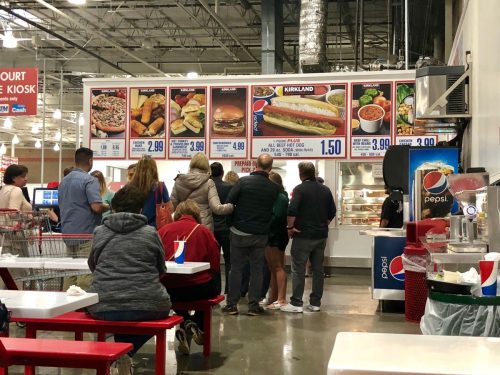 Costco products are often in the news, as they tend to have a cult following. Recently, members saw changes at the beloved food court. The popular chicken bake and 20-ounce soda underwent an inflation-induced price change, but Costco officials allayed fears by confirming that the hot dog-soda combo would never increase from its $1.99 price point.

The seasonal department isn't safe from scrutiny either: The Costco Wine Advent Calendar caused a stir recently, as shoppers were unimpressed with the selection. Reddit users claimed that Costco should be "ashamed to sell" the calendar because of the low-quality wine, and others stated that the 12-day advent cheese box and beer advent calendar were better investments for the holiday season.

Now, shoppers may find themselves up in arms about another department, which is missing completely.

Costco is pulling these items from two states.

Avid readers and Costco members might be upset to learn that books will no longer be sold at certain Costco warehouses, according to the Honolulu Civil Beat. The announcement was made to distributors by Costco media buyer Alexandria Kanenwisher in September, the outlet reported.

Members in Hawaii, where Costco has seven warehouses, and Alaska, where the wholesaler has four locations, will bid farewell to book sales, but the reasoning behind the termination hasn't been made explicitly clear. Kanenwisher didn't respond to requests for comment from Honolulu Civil Beat on the discontinuation of book sales.ae0fcc31ae342fd3a1346ebb1f342fcb

A spokesperson for Costco told Best Life that management has no comment at this time.

The biggest blow will be for local authors.

Costco managers in Hawaii pointed to slipping sales as the reason for removing books, which Honolulu Civil Beat journalist Denby Fawcett noted books were nowhere to be seen on her last visit to the Hawaii Kai Costco. But Bennett Hymer, owner of Hawaii-based publisher Mutual Publishing, told the outlet that Costco identified a separate issue.

"Costco told our office that the elimination of books in its stores had to do with the expense of shipping to Hawaii and Alaska, but that makes no sense because Hawaii published books were delivered locally, not shipped in," Hymer said. "Costco said also it was because of the expense of returning books that didn't get sold. But that still makes no sense because there was no shipping expense to return books to us."

Hymer added that Hawaii authors felt they'd "really made it" when their books were sold at Costco, which gave them shelf appeal while members shopped for groceries and other necessities. Now, these authors no longer have this opportunity, and there are fewer opportunities in general to buy and sell books.

"Independent bookstores notwithstanding, I wonder if parts of Hawaii are becoming book deserts," Jane Gillespie, production manager at Mutual, told Honolulu Civil Beat. "Yes, there's Amazon, but it's not the same as being able to browse and search a table of books or shelves of books. Local, specific Hawaii titles get lost on Amazon—they're only found if actively searched for."

Some Hawaii residents aren't as disappointed.

With Costco no longer acting as a bookseller, Barnes & Noble will be the only "big bookstore" in Hawaii, specifically. But while Costco generally sells books at a discounted price, helping members to save money, there is a cost for others. The Honolulu Civil Beat also spoke to Hawaii locals who weren't so sad to see books disappear from Costco, namely independent booksellers.

"Costco sold its books to shoppers for the wholesale price we pay for books," Christine Reed, founder of Basically Books in Hilo, Hawaii, told the outlet. "Basically Books has to tack on shipping and other costs to its book prices."

The elimination of competition with Costco in Hawaii is significant due to the wholesaler's ability to offer discounts, but the conversation about big-name booksellers and independent stores is not a new one. Nationwide chains like Barnes & Noble have been cited as the cause for the downfall of independent stores, but that retailer has managed to reinvent itself as an ally, primarily by keeping investments in brick-and-mortar stores.