If you've read about the insane pre-wedding bash that included a private performance from Beyoncé, you know it's not uncommon for brides to go a little overboard for their big day. But it's something else entirely when you go full Bridezilla on your guests.

Recently, one Reddit user posted a screenshot of the ridiculous demands one bride was making for her wedding in Hawaii, which is scheduled for next year.

"I am giving you a long notice of a year and a half to pick out something nice. The dress code is very specific because it will be used to create an incredible visual effect," she wrote.

Women who weigh more than 160 pounds, however, were relegated to simply wearing an all-black sweater and pants, as well as black shoes. And men who weight more than 200 pounds? Black sneakers and "camouflage."

She also told everyone to bring a change of clothing because they will be required to wear formal attire once the dancing ends.

"Remember, the venue is extremely upscale, and we want to be looking our absolute BEST, ladies and gents," she wrote. "Please, if you look like trash, so will we. All jokes aside, we want you to invest in an outfit valued at at least $1,000. This includes jewelry, accessories, makeup, and hair. Remember ladies and gents, this wedding is 24k themed for a reason."

Okay, where even to begin?

It should go without saying that asking people to dress according to their weight is utterly bonkers. Secondly, you cannot ask people to invest at least $1,000 into the outfit they wear on your wedding day. (If it's that important to you, you better splurge on them yourself, the way Sean Parker did for his Lord of the Rings-themed nuptials.) Thirdly, who wears a sweater to a beach wedding in Hawaii?

But it gets worse.

Apparently, the bride got wind of the fact that someone posted her dress code demands on Reddit, and she was not happy about it.

"It has come to my attention that someone went all the way down in this groups creation to screenshot the dress code requirements," she wrote in a follow-up post. "I could not be more crushed, betrayed, or saddened. I trust each and every one of you so intimately. Knowing someone went behind my back and made fun of me is one of the worst feelings everywhere. And boy, will you be paying." 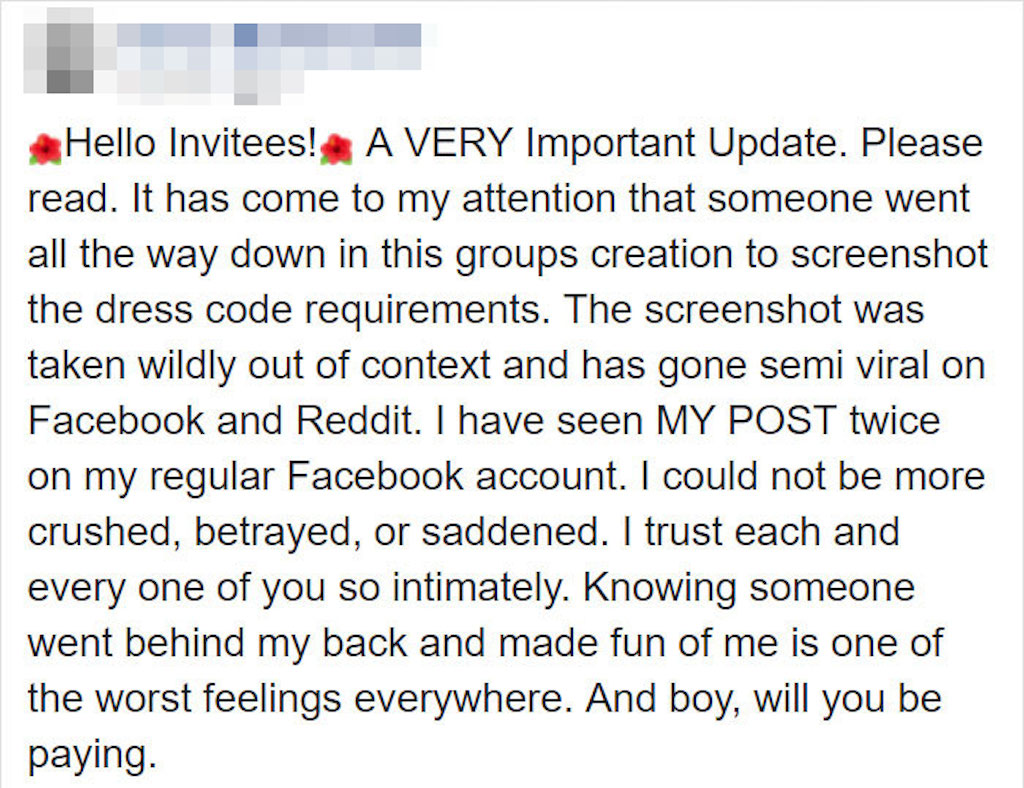 To root out the "snitch who sold" her out, she decided to host a "polygraph party" at her house.

You think she's joking? She's not. "We just bought a real polygraph test on Amazon for $99," she wrote. (Well, at least she's being good at budgeting.)

And, for the record, skipping out on the CIA-like festivities comes with some serious consequences. "After the testing is over and we find the rat who did this, we will all celebrate with drinks and appetizers," she wrote. "If you can't make it to the Polygraph Party, you will be presumed guilty unless you can provide a valid excuse." 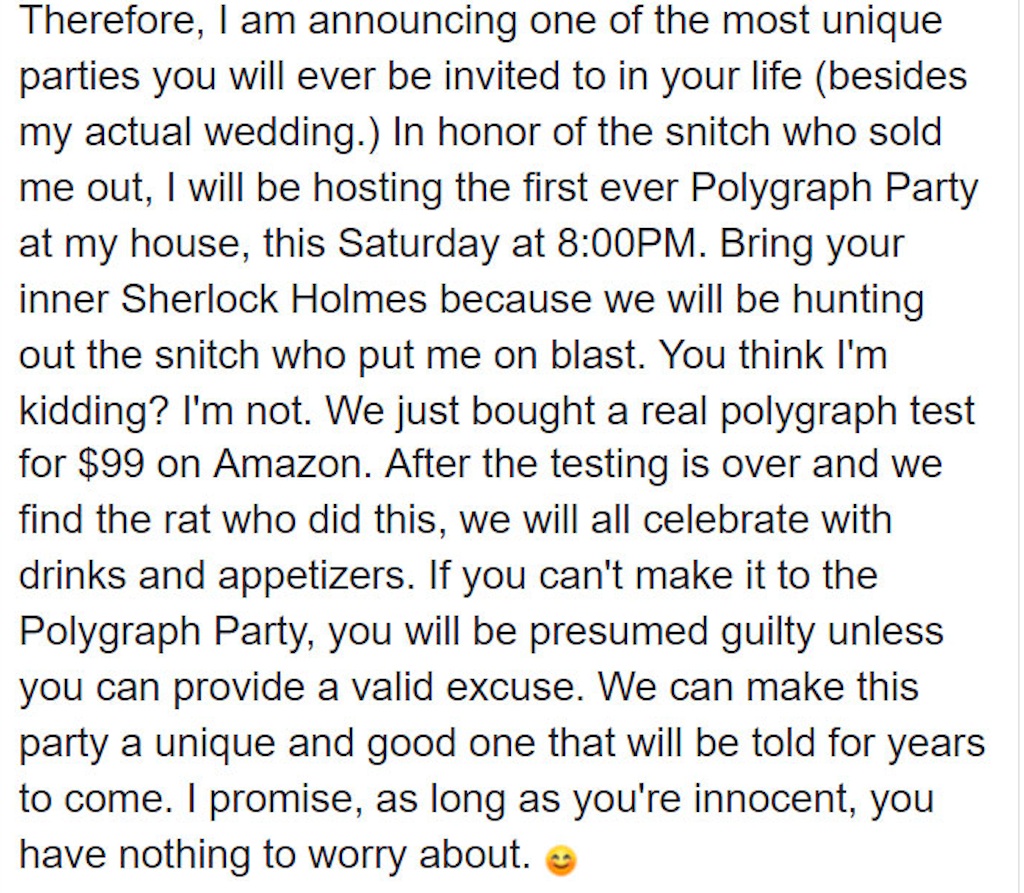 She then suggested that whoever the "rat" is come forward and admit their crime. "I won't retaliate, I will simply cut all ties and communication with you," she wrote.

It goes on. She then offered a $100 reward to anyone who had any "information" about who might have violated her "trust" and "wedding planning." She also very generously suggested that anyone who was unhappy with the dress code could "help the crew clean up after dinner, volunteer to take videos of [their] dance, or even contribute to the honeymoon."

Curious for more salacious details? Well, according to the bride, she and her future husband are "spiritual healers" who met at a "psychic's desensitization chamber" in Italy more than a decade ago. Okay then! And for more amazing stories of weddings gone horribly awry, check out the story of this bride who read her groom's cheating texts instead of her vows.ae0fcc31ae342fd3a1346ebb1f342fcb

Diana Bruk
Diana is a senior editor who writes about sex and relationships, modern dating trends, and health and wellness. Read more
Filed Under
Marriage • Weddings
Read This Next
Latest News
Read This Next