5 Body Language Signs That Mean Someone Is Jealous, According to Therapists

They'll do something very specific with their eyes.

A person's body language can tell you a lot of valuable information. For example, it can show if they're nervous, excited, scared, or exhausted. It could even tip you off to whether they're romantically attracted to you. However, it doesn't end there. According to body language experts, a person's gestures could decipher if they're feeling jealous. Ahead, those therapists outline the body language signs that signal envy. Take note, so you can stop a jealousy-based incident before it starts.

READ THIS NEXT: 5 Body Language Signs That Mean Your Partner Wants to Break Up, According to Therapists.

1
They cross their arms and legs.

Crossed arms often signal jealousy or insecurity. "Someone may cross their arms while talking, or if they're seated, they might cross their legs and lock them together tightly," says Megan Harrison, licensed marriage and family therapist and founder of Couples Candy. "They may also clench their fists or intertwine their fingers very tightly as if to emphasize the intensity of the emotion they are feeling. All these gestures demonstrate an attempt to emotionally protect oneself from possible rejection or betrayal by others." These gestures will typically appear with a general sense of discomfort.

2
They glare at you or turn away. 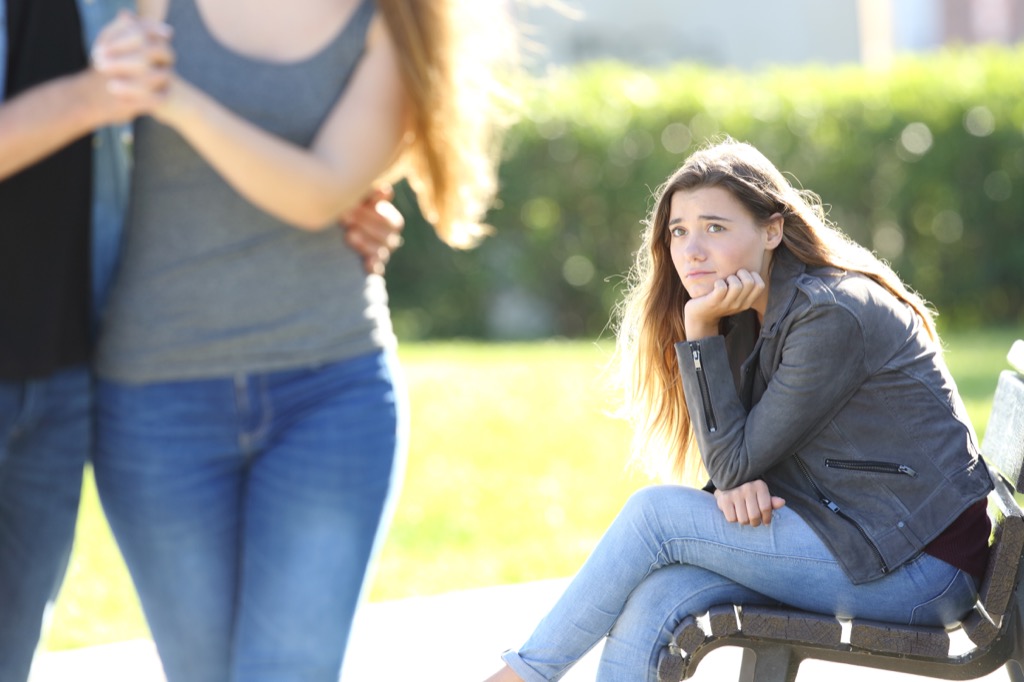 If someone is jealous of you, they might either turn toward or away from you, an action that can provide a sense of security, according to Harrison.

"Turning away could aid an individual in finding solace by creating distance between themselves and the source of their jealousy," says Harrison. "Alternatively, turning towards that person might give someone a chance to observe them more closely, potentially providing insight into why they feel the way they do." It could also instigate a conversation that allows the two to discuss their feelings.

A person's eye contact might also follow this pattern. "A person may avoid making eye contact with the person they are jealous of, or they may try to establish eye contact to assert their dominance or superiority," says Jeni Woodfin, licensed marriage and family therapist in San Jose, California. The choice they make depends entirely on the situation.

READ THIS NEXT: 5 Body Language Signs That Mean Someone Is Lying, According to Therapists and Lawyers.

3
They narrow their eyes.

There are other cues someone might give you with their eyes if they're green with envy. "Someone who is feeling jealous might narrow their eyes or look at the object of their jealousy with a piercing gaze," says Woodfin. "This behavior is often a sign of jealousy because it can indicate that the person is feeling threatened or is trying to assess a potential rival." It often occurs subconsciously, which makes it a great way to assess someone's true thoughts.

4
They puff their chest.

If someone appears to be making themselves look bigger, they might be feeling small on the inside. "Posturing or puffing out their chest can be a sign that the person is trying to assert their dominance or superiority, which can be a response to feeling threatened or insecure, which are common emotions associated with jealousy," says Woodfin. This can occur both consciously and subconsciously.

For more body language advice delivered straight to your inbox, sign up for our daily newsletter.

If a person can't seem to sit still, jealousy may be present. "Fidgeting or playing with their hair or jewelry can be a sign that the person is feeling anxious or nervous, which can be common when someone is feeling jealous," says Woodfin.

This nervous tick can also come in the form of self-soothing behaviors. "Touching the neck or face can be a sign of discomfort or insecurity, which can often be seen when someone is feeling jealous," Woodfin adds. The more of these behaviors you catch in tandem, the more insecure a person might feel.

Juliana LaBianca
Juliana is an experienced features editor and writer. Read more
Filed Under
News • Relationship Advice
Read This Next
Latest News
Read This Next