Park officials say that this painful process will be beneficial in the long run.

Yosemite National Park is a must-see destination for travelers, having been first preserved in 1864 and then designated as a national park in 1890. Visitors can enjoy almost 1,200 miles of beautiful valleys, meadows, waterfalls, and sizable sequoias. Those flocking to the park for the trees might be horrified to learn that Yosemite officials recently started to cut some down—but it's not for the reason you'd expect. Read on to discover why some trees are on the chopping block, and how it could help Yosemite in the long run.

READ THIS NEXT: The 8 Best U.S. National Parks for People Over 65, Experts Say.

There have been ongoing wildfires at Yosemite this summer.

Wildfires are one of the biggest threats to national parks, and two fires this summer—the Washburn fire and the Oak fire—have forced portions of Yosemite National Park to close and nearby residents to be evacuated. The Washburn fire also spread to the famed Mariposa Grove, where many of the giant sequoias loom, but thankfully that fire is currently 91 percent contained, according to an incident report. The Oak fire, however, began on July 22 and is only 26 percent contained.

Officials remain unsure of what caused the fires, but humans are suspected to have prompted the Washburn fire, the incident report states. Considering the severe damage wildfires can have—especially amid the ongoing threat of climate change and drought—experts have set a plan in motion, and it might seem counterintuitive at first.

Cutting down and burning trees is beneficial, park officials say.

According to The New York Times, officials at Yosemite are cutting down trees to control for wildfires, which is part of a larger initiative to protect forests at the park.

Cutting down trees (also known as "felling") can be helpful, as can intentional burns, officials say. Studies have shown that "moderately hot fires"—but not those that are overly hot—have several benefits and promote biodiversity, The New York Times reported. Core samples from Yosemite's trees even show layers of pollen and ash, suggesting that fires have been intentionally employed throughout history.

By felling and clearing trees, Yosemite officials state they are taking proactive steps against wildfire. Trees smaller than 20 inches in diameter are being cut down, as are dead trees, and dead and fallen trees are also being removed from the ground, according to the NPS project summary. The removal and thinning process "reduces post-drought and post-fire fuels" in the Merced and Tuolumne groves, the summary states, and officials say it must be done, even though the idea of chopping down these trees can be upsetting.

"It hurts people's hearts," Cicely Muldoon, superintendent at Yosemite National Park, told the Times. "But we have to use every tool at our disposal to save the forests and to save the park and to restore a healthy ecosystem and to keep people safe."

READ THIS NEXT: 8 State Parks That Are Even Better Than National Parks, Experts Say.

The project has drawn some backlash.

While Yosemite officials say that felling trees will make the park more resilient, a lawsuit is now standing in the way, pressing pause on the removal process. Led by the Earth Island Institute, the lawsuit wants to stop the cutting and thinning at Yosemite, per SFGATE, and argues that review procedures of the 1969 National Environmental Policy Act and the Administrative Procedure Act were not properly followed.

In an open letter to President Joe Biden, those behind the lawsuit allege that thinning is commercial logging in disguise. Chad Hanson, PhD, director and principal ecologist for the John Muir Project, a subsidiary of the Earth Island Institute, argues that largely thinned forests are actually more susceptible to wildfires, not less. And instead of interfering, he believes humans should let nature run its course.ae0fcc31ae342fd3a1346ebb1f342fcb

"Natural processes are meant to be the primary approach," Hanson said, per The New York Times. "Not chain saws and bulldozers and clear cuts."

The New York Times points out that Hanson has his fair share of critics himself, and other environmentalists and officials stand behind the process of thinning forests.

"Most of us are absolutely convinced that this is not only a good thing to do, but is absolutely necessary," John Battles, professor of forest ecology at the University of California, Berkeley, told The New York Times about "proactively" thinning and burning forests.

According to Muldoon, suppressing fires over several years has caused the forests to thicken, and fires become so hot that firefighters say it's like "battling hellish storms," the Times reported. Muldoon notes that this is why action needs to be taken via cutting. 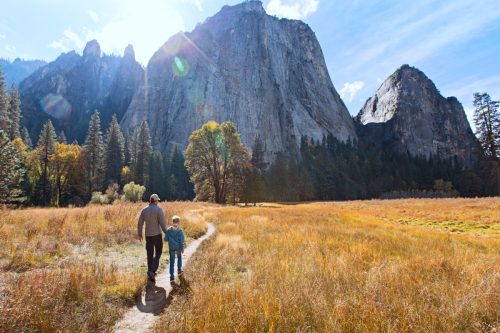 In terms of commercial logging versus felling, Garrett Dickman, forest ecologist at Yosemite National Park, told The New York Times that only six of 350 truckloads were sent to a sawmill, and the remaining truckloads were used at power plants to generate electricity. In addition, Dickman noted that the cost to load the trucks, between $1,200 and $1,400, is far more than the $60 profit made on 25 tons of material.

And while the Times states that the project only applies to 1 percent of forests at Yosemite, Muldoon also addressed the idea of leaving the park "unimpaired for the enjoyment of future generations"—a crucial component stated in the Organic Act of 1916, which created the National Park Service.

"If we've learned anything it's that we have been touching these lands forever—humanity has—and doing nothing is really doing something," she told the newspaper.