An ongoing event could affect your next trip to the famous destination.

Of all the natural wonders in the U.S., Yosemite National Park stands out as one of the most sought-after by outdoor enthusiasts and travelers. The nearly 760,000-acre site attracted more than 3.3 million visitors in 2021, making it the eighth most popular park, according to the National Park Service (NPS). But recent developments could seriously impact any trips to the site after officials issued a new alert about "hazardous" conditions at Yosemite right now. Read on to see what could affect your travel plans—and the very face of the park to come.

READ THIS NEXT: The 10 Best National Parks That Need to Be on Your Bucket List.

Yosemite already has some guest requirements that are important to know before you arrive. 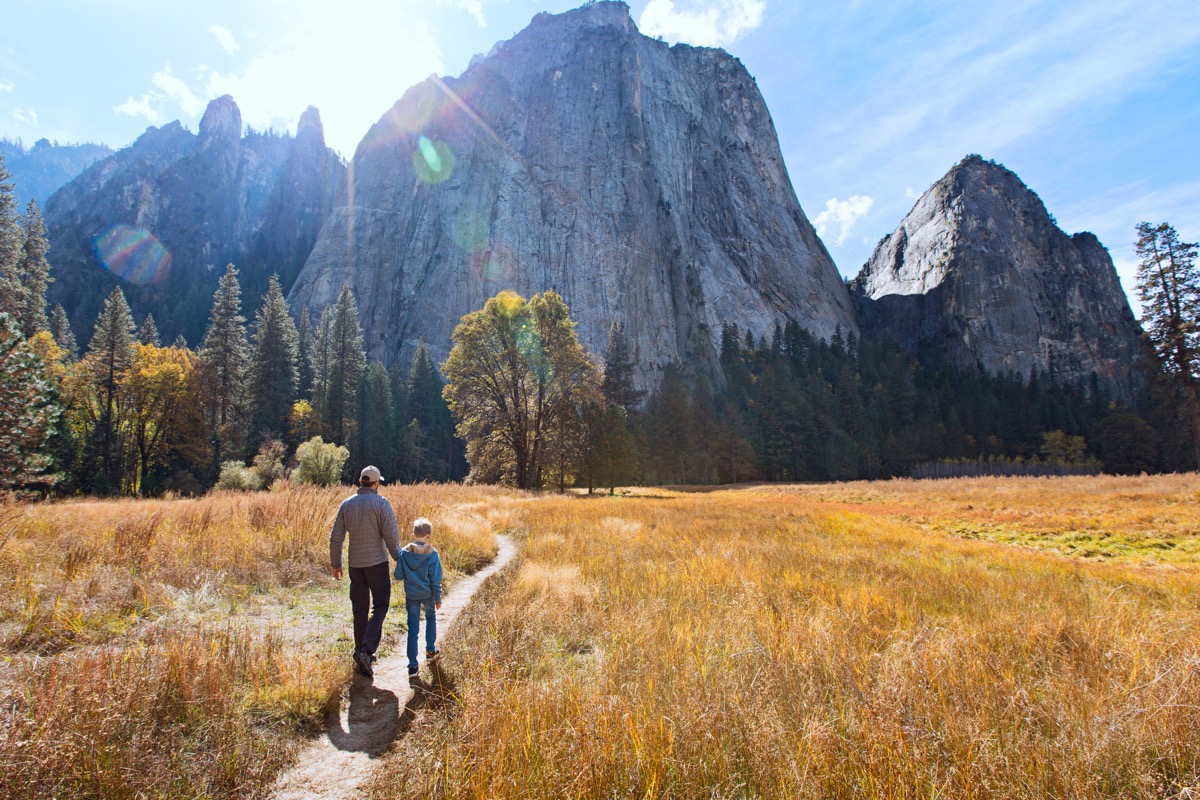 The forces of nature helped form the beauty and splendor of the National Parks. But as it turns out, they can also create issues when trying to visit them. Natural disasters and other emergencies can result in partial or complete closure of sites, such as the recent catastrophic flooding that hit Yellowstone National Park in June and ruined many of its roads, bridges, and other vital infrastructure.

The National Parks have also not been immune to the effects of the COVID-19 pandemic. Currently, Yosemite is one of four sites with a mask mandate in place for guests in all indoor areas due to the high risk of the virus spreading in its local counties, along with Yellowstone, the Grand Tetons, and the Grand Canyon, CBS News reported on July 6. But now, another serious issue is facing the famous California park.

Officials at Yosemite National Park just issued an alert about "hazardous" conditions at the site.

On July 20, officials from Yosemite National Park announced that the Washburn Fire had spread to over 2,000 acres in the park's Mariposa Grove. As a result of "hazardous" conditions, the park has closed its South Entrance and Wawona Road—otherwise known as Highway 41—to all except emergency firefighting traffic. Officials also issued a mandatory evacuation order for any visitors in the Wawona area in the park's southernmost limits, The Points Guy reports.

Visitors in other areas of the park could experience "emergency conditions" due to the wildfire.

Currently, the park's northern region remains open to visitors, including famous landmarks such as El Capitan, Half Dome, and Yosemite Falls. But officials reported that spreading smoke is already obscuring views and creating hazy conditions, which can be dangerous to some visitors in those areas.ae0fcc31ae342fd3a1346ebb1f342fcb

"Today it's actually the smokiest that we've seen," Nancy Phillipe, a Yosemite fire information spokesperson, said on July 10, per the Associated Press. "Up until this morning, the park has not been in that unhealthy category, but that is where we are now."

Conditions from the fire could even spread beyond the park and affect nearby cities, including San Francisco. "Smoke from the Washburn Fire is forecast to be transported into the Bay Area and is expected to impact the North and East Bay regions," the Bay Area Air Quality Management District warned on July 10. But while they advised residents to keep windows and doors shut and stay indoors if they smell smoke, they emphasized that "pollutant levels are not expected to exceed the federal health standard."

The fire is threatening one of Yosemite's most iconic features.

While many of the park's main areas are miles away from immediate damage, the Washburn Fire is threatening one iconic Yosemite fixture: the giant sequoia trees that make up the currently-closed Mariposa Grove. Officials said that more than 500 of the centuries-old trees were currently at risk—including the 3,000-year-old behemoth known as the Grizzly Giant—but that so far, the fire had not yet damaged any of the park's famous named trees, AP reports.

For now, firefighters are going to great lengths to slow the spread of the burning and protect the landscape, including wrapping the historic Galen Clark cabin in protective foil and installing other unique methods to increase humidity. "The combination of the removal of the hazard fuels and the prescribed burning that we've done, with the temporary sprinkler system that is in place, we are confident that's giving those giant sequoias the best protection available," Phillipe told CNN on July 11.

Zachary Mack
Zach is a freelance writer specializing in beer, wine, food, spirits, and travel. He is based in Manhattan. Read more
Filed Under
Destinations • Health Advice • News • Safety • Travel Advice
Read This Next
Latest News
Read This Next