In 2018, there's no need to follow a predetermined script.

While plenty of people still do traditional weddings, themed weddings are very much on the rise. The more we break from romantic convention, the more inclined people feel to celebrate their love in a way that is unique to them.

Oftentimes, these themed weddings go viral, and social media users make hateful comments suggesting the bride and groom are "dorky," "sad," or "out of their minds." But the truth is, there's something really romantic about two people proving that they're on the same offbeat page and share some of the same quirks. And, oftentimes, these weddings can be really fun and silly, more like a Halloween party than the super-serious rites of passage your grandparents attended. Here, we share some of the weirdest themed weddings that actually happened. 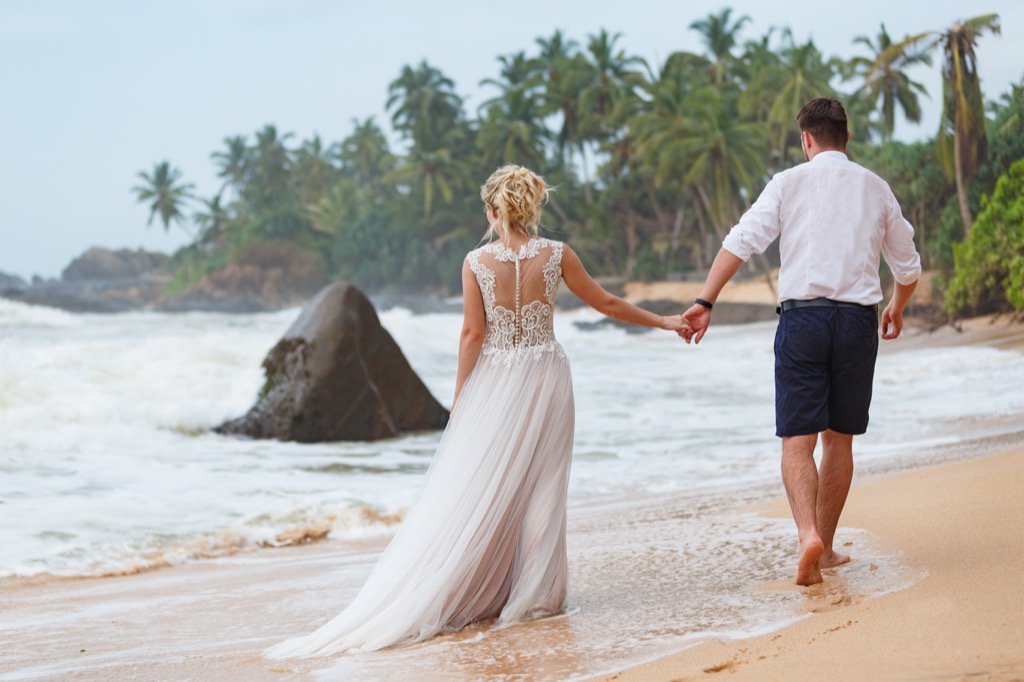 In 2011, Jamie and Christopher Chandler got married dressed as Princess Ariel and Prince Eric, and even has a stuffed Flounder at the aisle to bear witness to the happy day. The father of the bride walked her down the aisle dressed as King Triton, and the pre-wedding photos show Jamie combing her long, bright red hair with a fork. 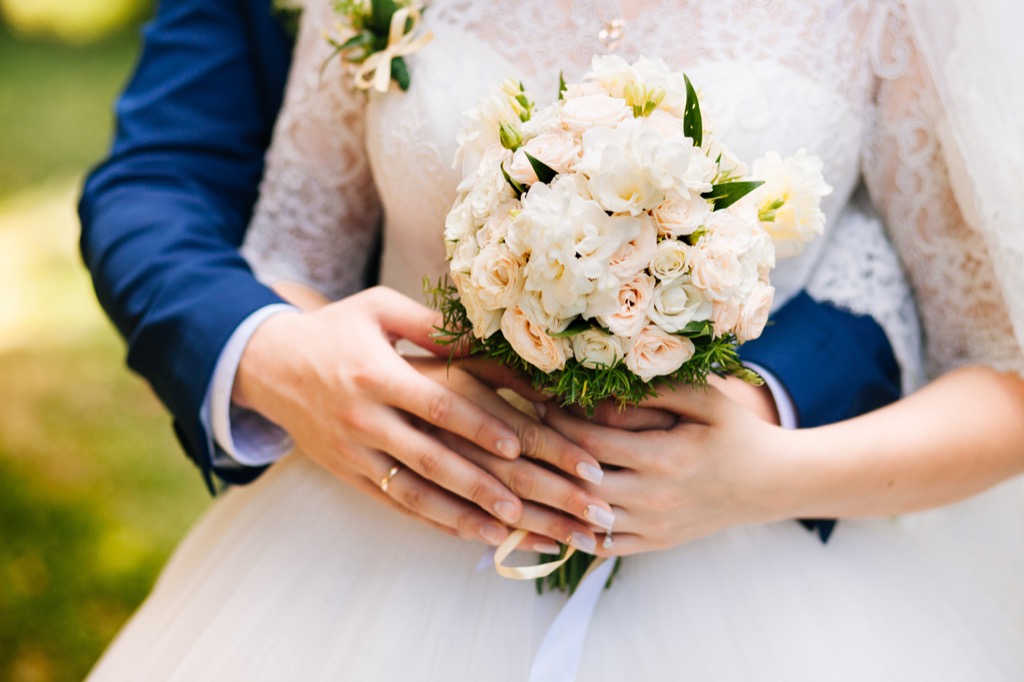 In 2016, Stephanie Dodd and Samuel Goetsch spent $65,000 on an elegant Harry Potter-themed wedding. The aisle was lined with pages from the books, the seating assignments were fastened to Quidditch hoops, and the programs were printed in the style of The Daily Prophet. In case that's not enough, they also had a live owl actually deliver the wedding rings. 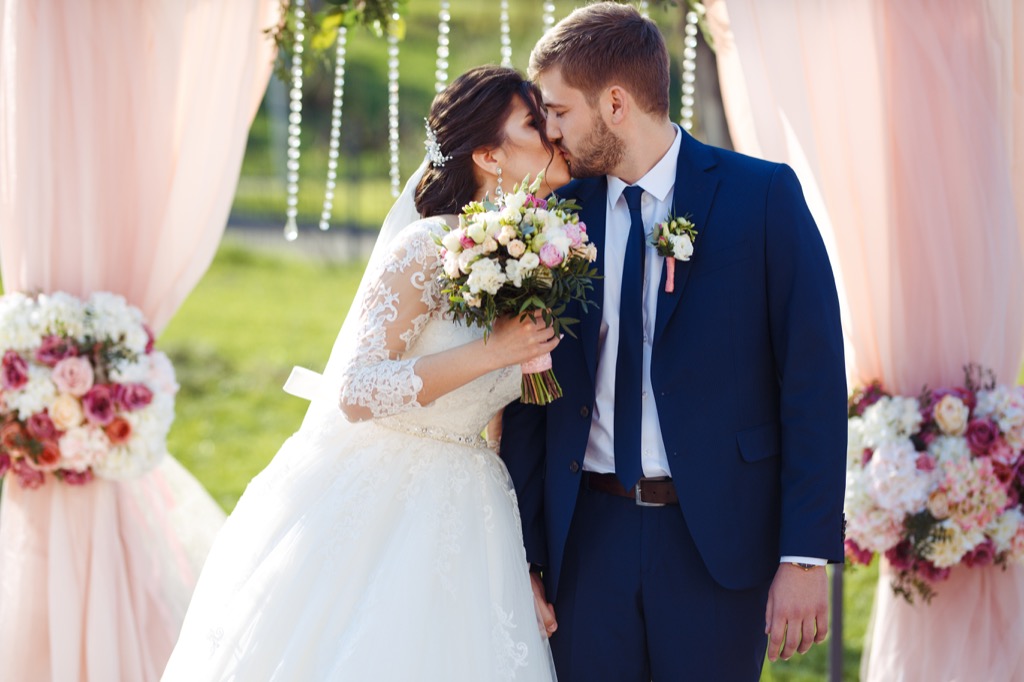 In 2014, Robert and Meredith Bonilla got married while walking down the frozen food aisle at Costco. It might sound strange but it's actually quite sweet, as that was where they first met. For the record, Costco doesn't usually allow weddings, but the store gave them special permission after falling for their sweet story. 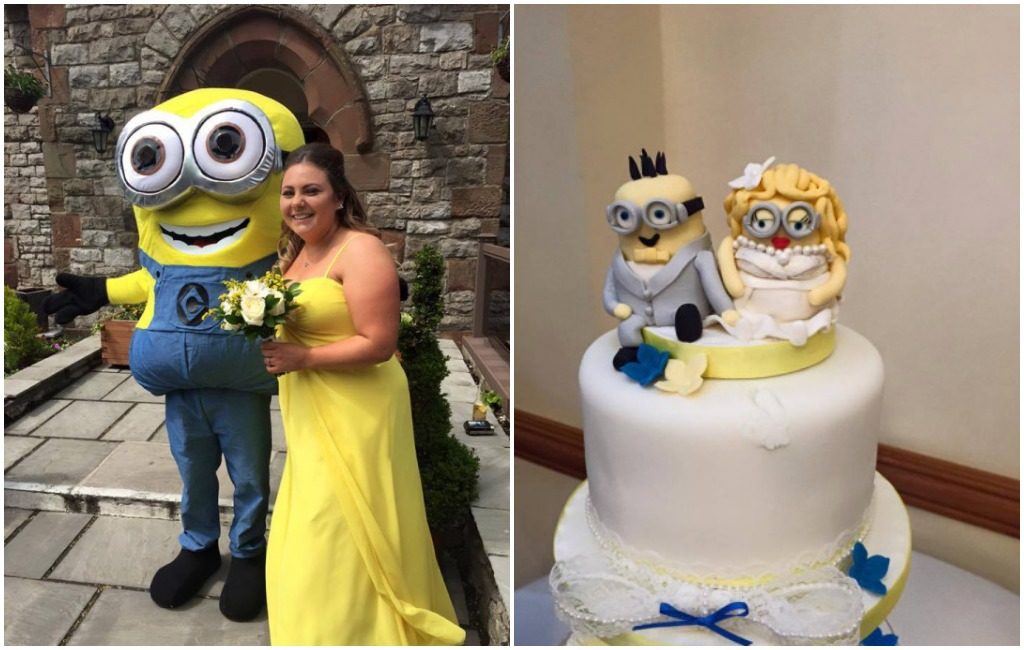 In 2015, Sam Finan and Bob Thomas had a #OneInAMinion wedding based on the animated comedy Minions. There was a Minion-themed cake, little stuffed Minions placed on all of the dinner tables, and, of course, a Minion to serve as witness. 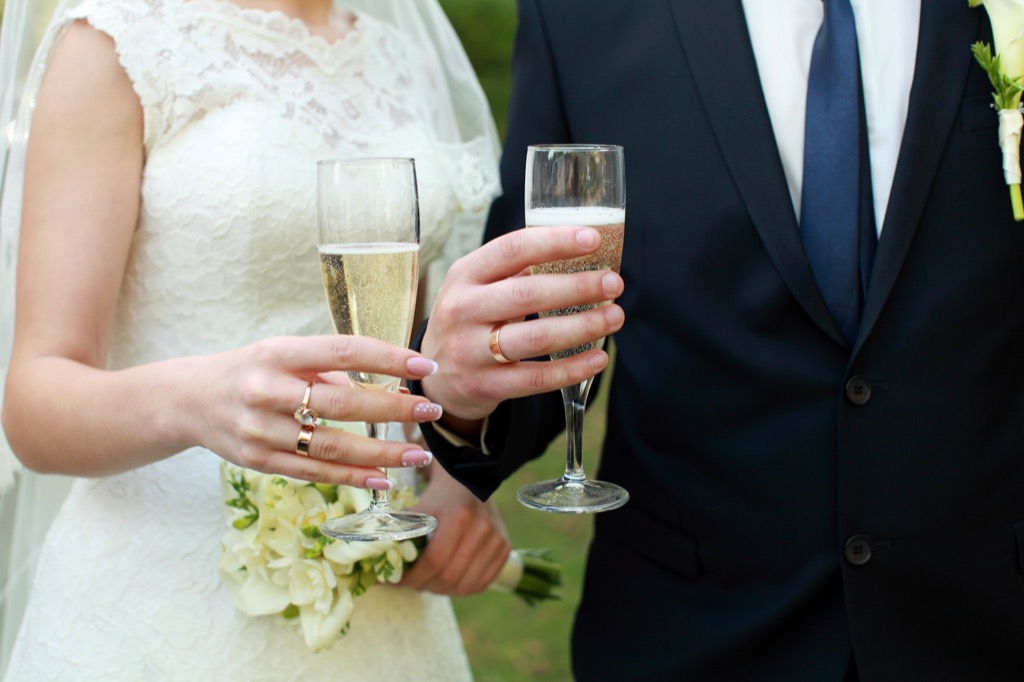 Anuj Patel and Sumita Dalmia first met on Twitter in 2013, when Sumita replied to a tweet Anuj posted regarding extra tickets for a game. They started messaging back and forth and were friends for a year before things took a romantic turn. Given that the site was their Cupid, they incorporated it into virtually every part of their wedding, placing the Twitter birds onto their wedding cake, the table place cards, the menus, and so forth. 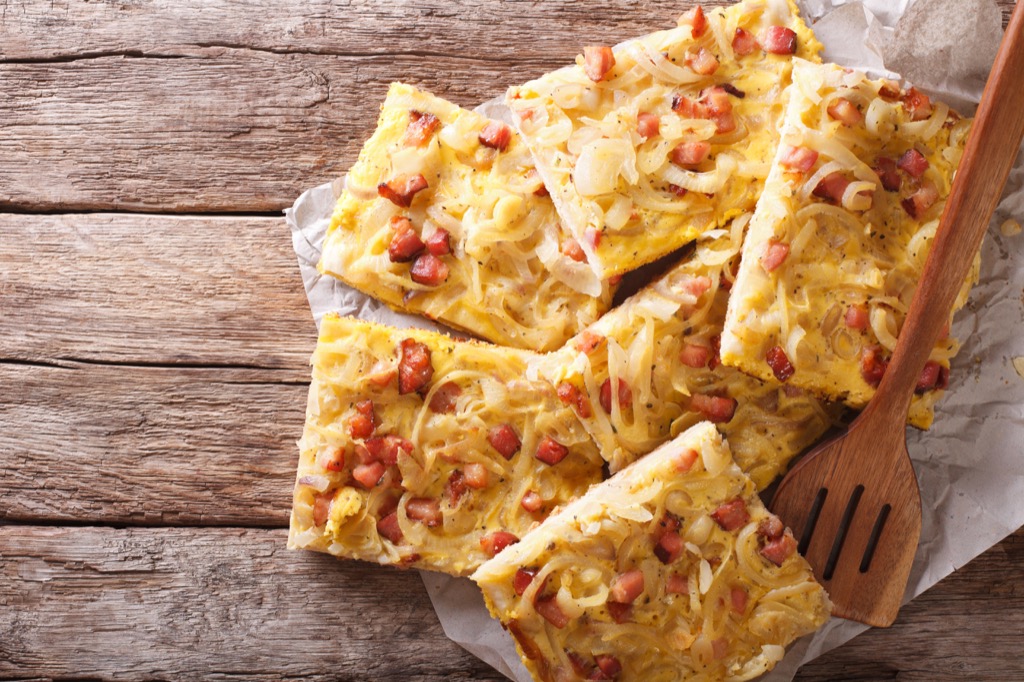 In 2013, Adrienne Dunvan and Eddie Quinones won a contest that enabled them to get married at San Diego's Big Bite Bacon Festival. There were bouquets made of bacon, a cake sprinkled with bacon, a wedding aisle carpet featuring slabs of bacon, and guests wearing bacon vests. Basically bacon everywhere. 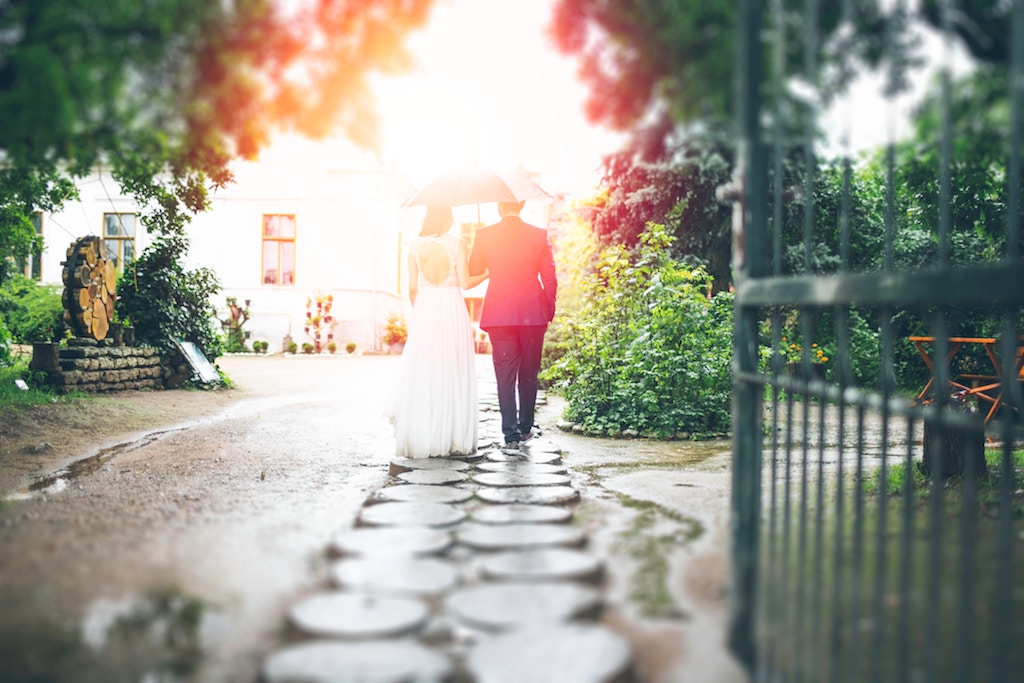 Given that Natalia and Rafael Kurzawa met in a tearoom, they knew their wedding would have to be an ode to Lewis Caroll's Alice in Wonderland. The whimsical reception was inspired by the Mad Hatter's tea party, so it included signs reading "This Way," vintage teapots and pocket watches, grass-covered tables, and pink and purple flowers. The bride wore black-and-white striped stockings, and the groom, of course, donned a top hat with a few playing cards lodged in the rim. 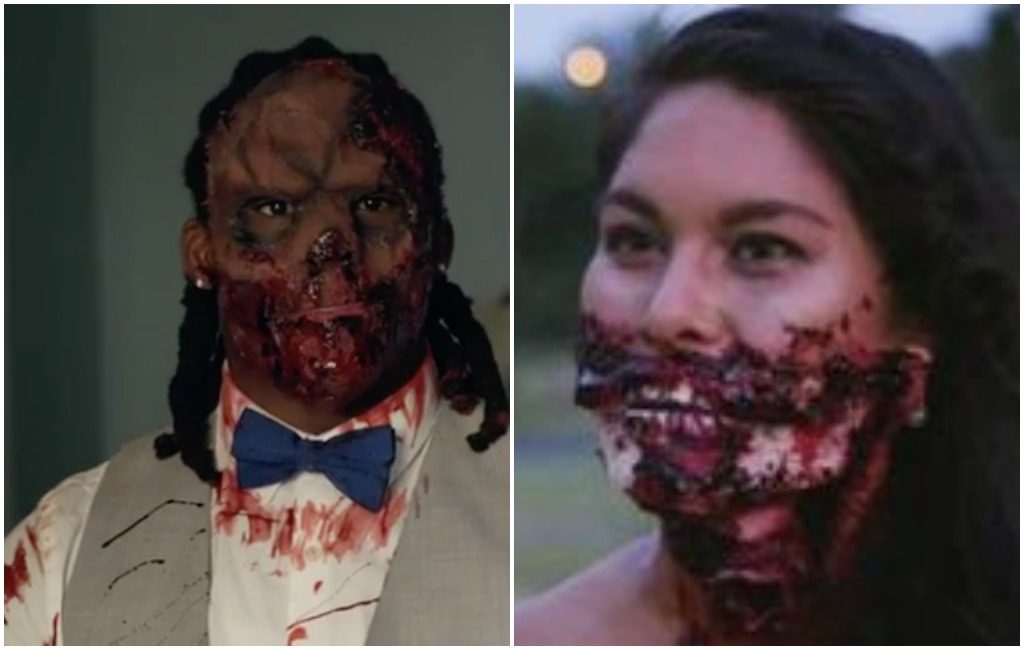 In 2016, NFL player DeAngelo Williams married his bride, Risalyn, in a Walking Dead themed ceremony. Williams had a makeup artist transform him, his bride, and all of their guests into zombies, and then shot a video in which the guests chase them around. "Everybody goes through weddings. They walk down the aisle. It's over with," Williams said. "[The zombie wedding] is a time for us to laugh and point and say, 'Ha, you look goofy.' It gives us a chance to step outside our comfort zone and put on our acting skills, whether we possess them or not."

9
Lord of the Rings

In 2013, Napster founder Sean Parker shelled out $10 million for his enchanted wedding among the towering redwoods of California's Big Sur. Each of the 364 guests were given a Lord of the Rings-inspired costume to wear that was made by the film's actual costume designer. Fairy lights, petals, and garlands were strewn everywhere to make it look like the elven kingdom of Rivendell, and the reception area even had fur-pelted seats and beds.

For this wedding, the bride and groom really morphed into their Edward Cullen and Bella Swan. Bold wine was served in small glasses that made it look like blood, their old-school suitcases had tags on them that read "Mr. and Mrs. Cullen," and there were jars filled with pins that read things like "Life S*cks," "A Vampire is For Life," "Bite Me," and so on with little droplets of blood for extra effect.

Why choose one Disney movie as a theme for your wedding when you can pay tribute to them all? That's what one couple who got engaged by the Sleeping Beauty Castle in Disneyland did. Each of the tables had their own theme. The Cinderella one included an elegant pumpkin carriage, The Little Mermaid table featured some of the odd items in her underwater collection, The Snow White tabled had a centerpiece of poisonous apples, and the Tangled table had an array of lanterns.

To be fair, lots of people have Star Wars-themed weddings, but some take it further than others. This couple had Darth Vader officiate and acted out a whole scene in which he had to fight off anyone who objected to the nuptials.

In 2017, Dan and Bianca Ryckert won the Love and Tacos Contest and became the first couple to get married inside the chapel in Taco Bell's flagship restaurant in Las Vegas. Taco Bell decor was everywhere, Bianca held a bouquet made of sauce packets, as was Dan's boutonniere. Of course, tacos were the main dinner item, along with a wedding cake made of Taco Bell's Cinnabon Delights.

In 2012, Nate and Sasha met on an Imgur thread about, of all things, picking up women at funerals. A year later, they were married, and since Imgur was their virtual matchmaker, it became the theme of the wedding. They had an Imgur-themed wedding cake, and a bunch of their Imgur friends flew from across the country to attend the nuptials.

In 2014, one couple decided to have a Game of Thrones-themed wedding in honor of their favorite show. They had an acoustic guitar version of the theme song playing during the procession, and the "Rains of Castemere" theme as the bride walked down the aisle. The party favors read "Lady Valentina and Lord Jesse," and the tables were each named after a different house. They also had a wedding cake that read, "Unbowed, Unbent, Unbroken," the words of the House of Martell. The bottom layer was meant to represent dragon scales, whereas the top stands for Jeffrey's Crown. 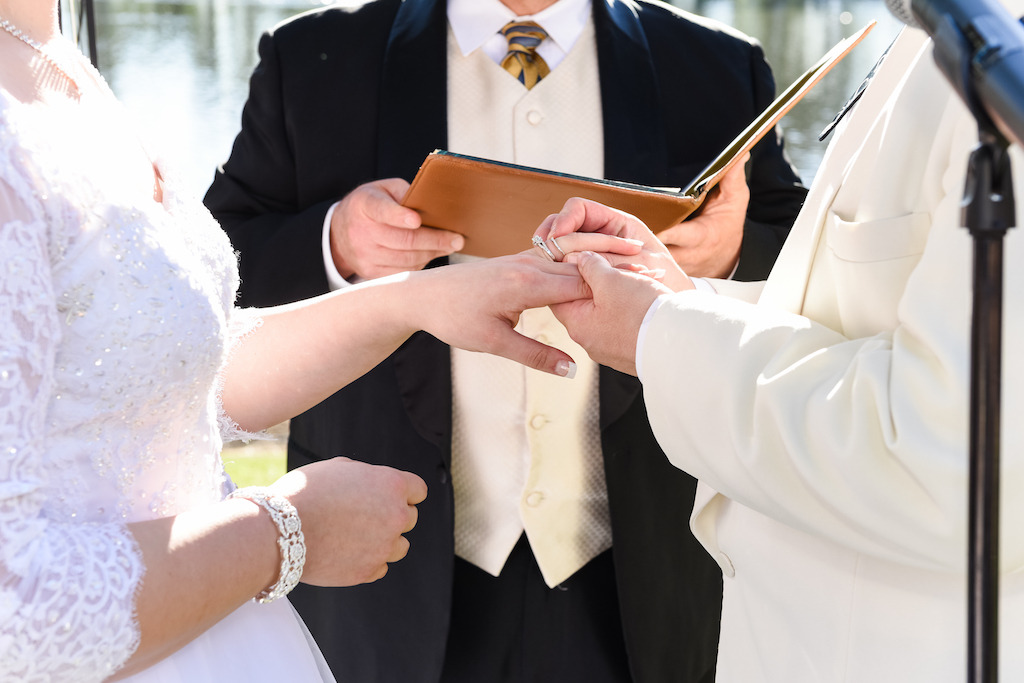 Last April, Bess Wohlner and Jeremy Simons tied the knot in a Delta-themed (yes, the plane company) wedding in Tennessee. The airline carrier played a big role in their relationship, as they had to do long-distance for a little while. They separated for some time, but reconnected when they happened to be on the same Delta flight from New York to Tel Aviv. Once they got engaged, they sent out Delta-approved "Diamond Status" save the date cards and made the airline their official theme. Wedding guests were welcomed with first class amenity kits, and the bride and groom walked down the aisle on a branded airline mat. The food was served on Delta flatware, and they ate their wedding cake on the beverage carts. There was even a room with a green screen simulating the inside of an airplane in which guests could pose for photos with oxygen masks.

Last September, Garrett Smith and Jason Bitner dressed up as best friends Woody and BuzzLightyear from Toy Story for their Illinois wedding, and shared their first dance to the movie's theme song, "You've Got a Friend In Me." Their entire wedding party wore Disney outfits as well, and Smith's parents dressed up as Ursula and King Triton while Bitner's dad dressed up as a pirate and his mom went as Tinkerbell. Each of the tables had decor inspired by a Disney movie, and they even dusted off their old Disney VHS tapes to put on display. "I really like how Buzz and Woody have such a strong friendship throughout all the three movies," Smith said of the decision. "And like in any marriage, you have to have a strong friendship and mutual respect for one another."

Is there anything cuter than puppies? No. That's why when Meghan Butler chose to have her bridesmaids hold puppies instead of bouquets at her 2017 wedding, the resulting photos immediately went viral. Best of all, the decision served a good cause, as all of the puppies were subsequently adopted.

Fans of the hit NCS show This Is Us know that Jack and Rebecca are the ultimate in #couplegoals. So it's no wonder that when one couple decided to use their resemblance to the lead characters to host a wedding that closely resembles theirs, the ensuing photos went viral and made everyone cry.

Roshan and Monisha of Thrissur, India, got married during The World Cup last June, so they decided to go all out and make the nuptials themed after Argentina's soccer team. All of the decor was blue and white to represent the colors of the Argentinian flag, and the wedding cake was made into the shape of a soccer ball, which even included stitching to make it look authentic. Argentinian flags were placed on every dinner table, and the food was served by staff wearing the team's jerseys. Even their pre-wedding photo shoot featured them playing a Brazil-vs.-Argentina game on a soccer field in the rain.

When your groom is a magician, you expect a little magic at the wedding. But the Internet's mind was absolutely blown by the first dance of magician Justin Willman and photographer Jillian Sipkins at their 2015 wedding, given that the groom legit levitates during the song "I Put a Spell on You." Seems like his father-in-law was pretty impressed as well.

Back in 2015, this wedding cake made out of edible Lego bricks got a lot of love from the Internet. 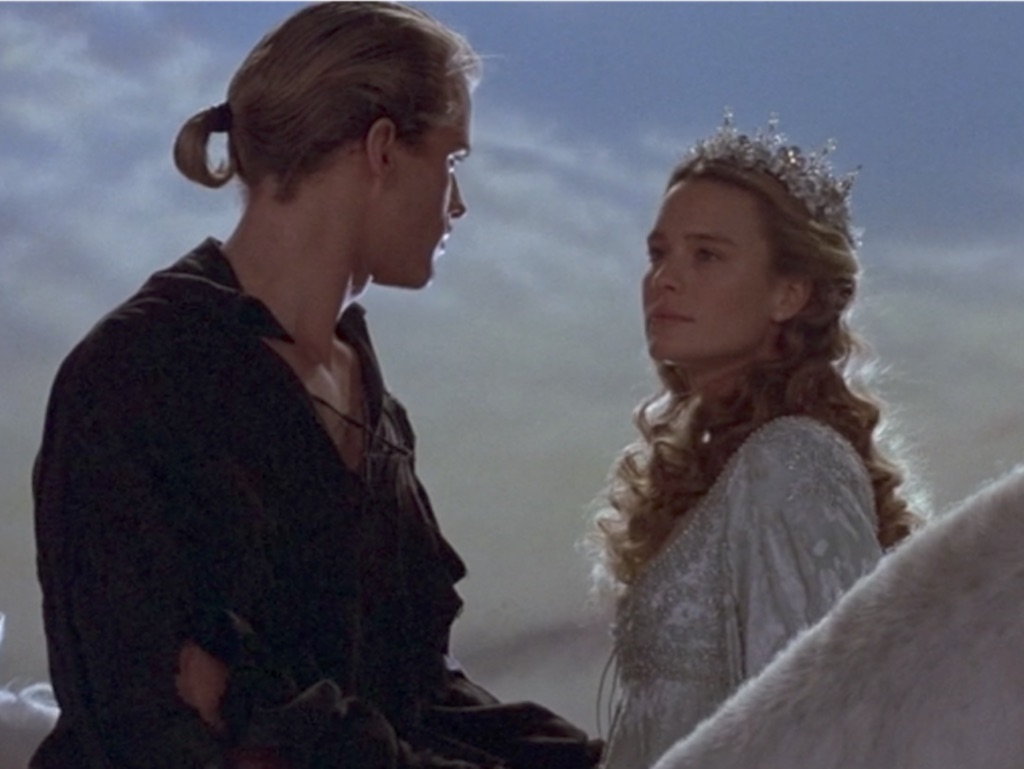 In 2012, a couple decided to have a wedding inspired by the 1987 fantasy/romance film The Princess Bride. In addition to dressing for the parts, they were wed in a wooden path, stuck swords in the ground around the wedding aisle, and exchanged vows under a fairytale-style banner that read, "Joined by the Bonds of Love." 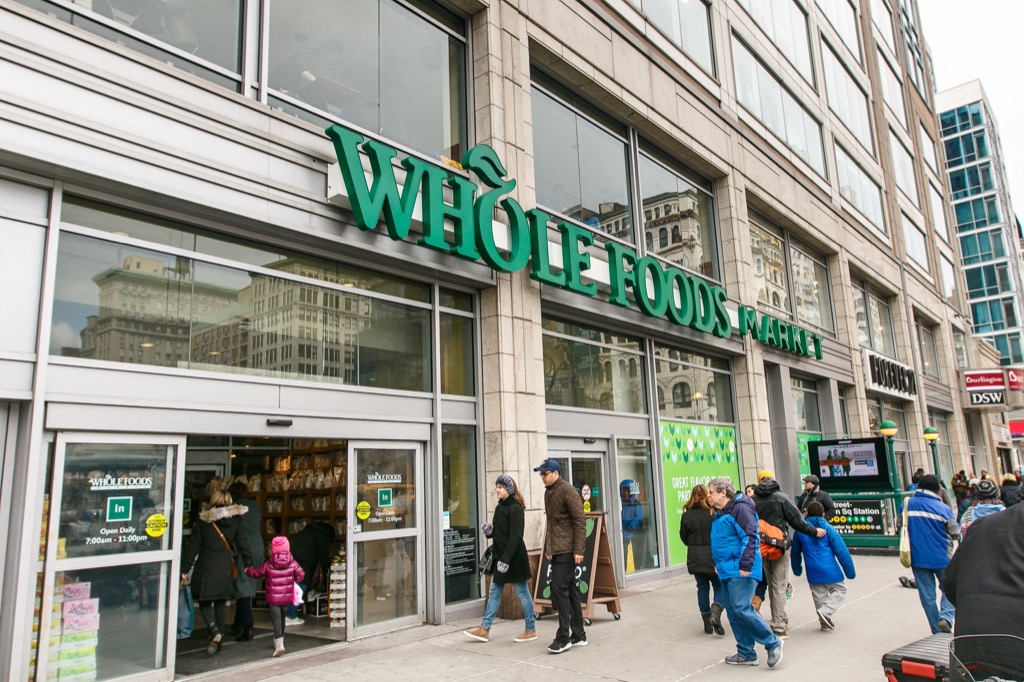 Whole Foods was where Ross and Jacqueline Aronson got to know each other when they first started dating, strolling the aisles and chatting the way comfortable couples do. So it makes sense that Ross proposed to Jacqueline at their local supermarket, and that they chose to get married in the flower aisle exactly one year later.

In 2017, Tom James and Dustin Ngo got married in the Rare Books Room at the Strand bookstore in New York City. "The Strand embodies all of the things we love about our relationship," Tom told Brides. "It's a warm, intimate space full of stories, knowledge, and adventure." Stacks of books lined the dining tables, along with numbers made to look like vintage library cards. 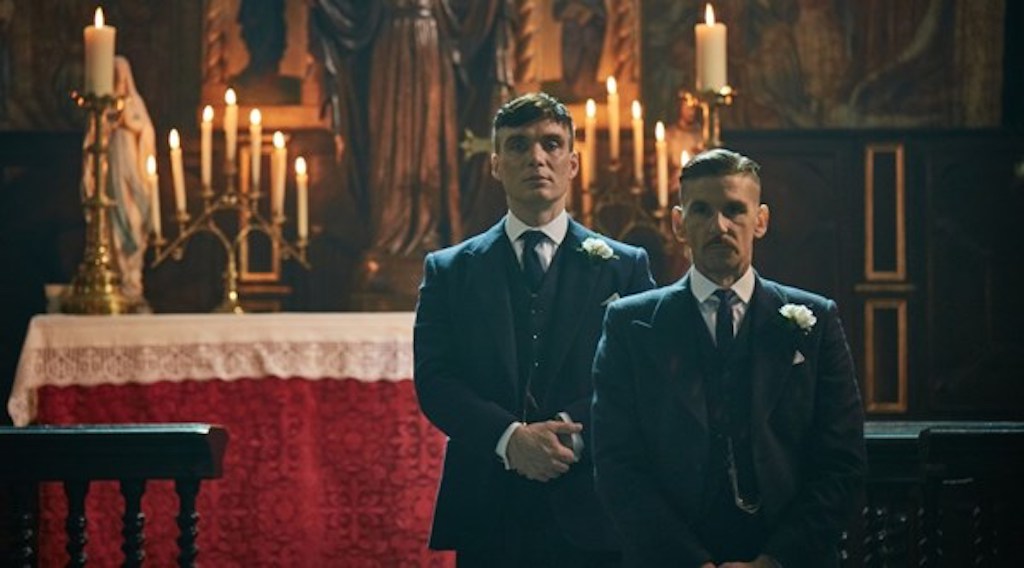 Lead actor Cillian Murphy has previously said that he thought that he found the trend of Peaky Blinders-themed wedding "a little weird," probably because the show deals with  gang violence in 1920s England, and is often insanely grisly. Nonetheless, it is a thing, and in 2017, Fay and Tom got married in moor surrounded by guests wearing tweed, caps, and smoking cigars.