Is he or she just demanding—or a demon? Triumph over any bully with this advice.

Too many of us have had one: the bully boss from hell. One who doesn't like you on sight. One who starts out all sweetness and light, and then begins undermining you. One who pushes your stress levels into the stratosphere. One who has zero problem denigrating you in front of other people or rants like Howard Beale on meth. The good news: You're too old to put up with it. "Don't rationalize it," says Gary Namie, Ph.D., founder of the Workplace Bullying Institute. "Bullying is not a rational process."

But there are steps you can take to attack the problem that don't involve taking it or running for the exits (at least not at first). Namie walked us through them. And we have even more advice on how to deal with a bad boss here.

1
Learn the difference between a difficult boss and a bully There is a discriminatory process going on. Bullies single people out for misery. Other people have time to fix mistakes and are forgiven for small infractions. But for the target, social misery is dumped disproportionately on them. A fair and consistent boss applies demands to everyone. Also, when crunch time's over and a project is complete, they can turn it off and celebrate. But with a bullying boss, there's no celebratory end stage. In our 2014 survey, 56% of bullies in American workplaces are bosses. Now, if you're boss has got you stressed, check out these workplace stress-busters.ae0fcc31ae342fd3a1346ebb1f342fcb

2
Know if you're a typical target

We've done 49 studies on this. It's usually a technically proficient, highly competent person. They're wonderful people, but they can't defend themselves. Targets are very stubborn—they want to "prove them wrong" and "not let them win" because of the injustice of it. They end up getting terminated. Also, make sure you aren't a bad boss by taking our test.

3
Then make yourself bully-proof

Self-blame is a natural tendency of people who are targeted. If you don't get out of that rut, you'll have trouble recovering. A bully-resistant person knows he's good. He can defend himself. Bullyproof people are political—they see it coming and blow it off. And they won't be intimidated—they'll push back. Bullies love aggressive people, because that's their personality. For more insight into how to survive at the office, be sure you know how to fireproof your career.

You need to recognize bullying early and get the support of your coworkers, so it's not you acting alone to tell the employer that this is wrong. And for more great career advice, here's how the smartest men get ahead at work.

5
Expose his or her bad side

Call out immediately for other people to observe it. Open the door. The idea of doing things behind closed doors is so they have plausible deniability. You literally have to say, "Can you hear this? I need your help here." Rally the support of your co-workers, or you will go down.

We've said that for years. Do not go to HR thinking you're going to get support. HR is a management support function, and they know it. This is like going to your high-school hall monitor to complain about bullying. In the end, it will only incense your antagonist. Find a higher-level manager and appeal to the financial impact of the bully's behavior. Say, look at how this person is responsible for turnover, difficulty in recruiting and absenteeism costs. Then if the company cannot make you safe, it's time to move on.

8
Get emotional support so you can quit 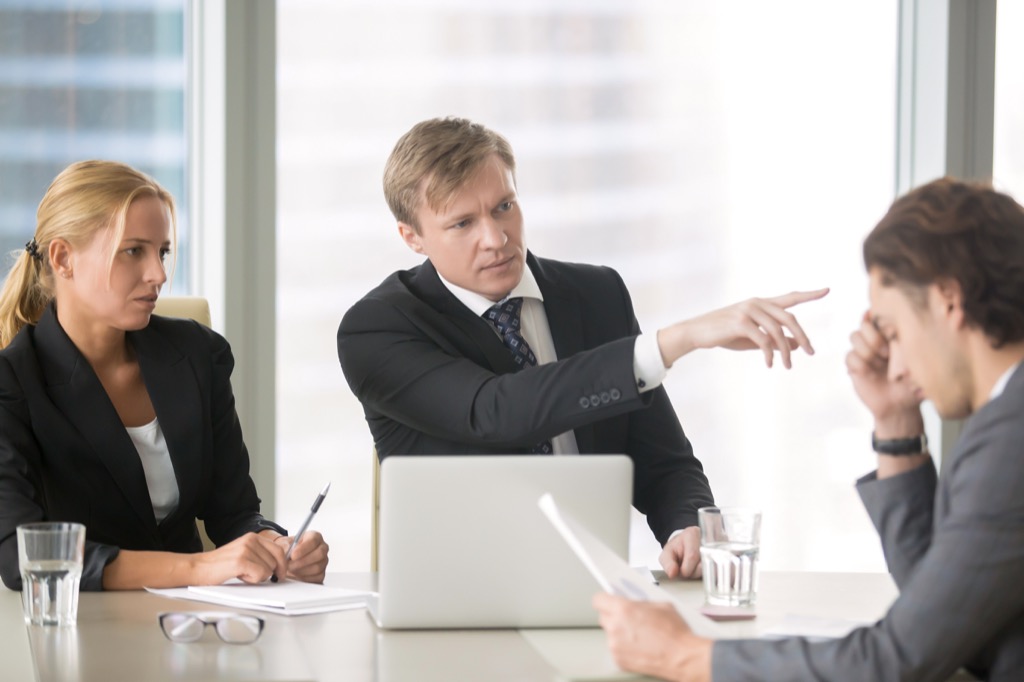 Of course, none of us can afford to lose your livelihood. You've got mortgages and obligations. But nobody deserves cardiovascular disease because of a damn paycheck. No matter how big the paycheck is. Get emotional support from family and friends. Keeping it a secret from them is not good for your mental health. You often need someone to say, "Bob's an idiot, get another job." Don't isolate.

I have hope for the future. This somewhat generational. Millennials don't take this kind of shit. I think it's great. They say, "You talkin' to me? I've grown up hearing you can't bully me." And they're the ones who will make a change.