A Practical Guide to Quitting Your Job and Traveling the World

From people who actually did it.

It's one of those bucket-list dreams: What if I just dropped everything and went on an adventure? For most of us, such thoughts don't get past the dream stage. After all, when you actually stop to consider the heavy lifting involved—from figuring out how to afford it to plotting the itinerary—it seems totally impossible. It's so much easier to stick with the biannual trip to Cabo, right?

Well, according to some people: Nope. These lucky few actually quit their jobs, put their day-to-day life on pause, and saw the world—for months or even years at a time. We tracked them to find out what the experience is really like and gathered their six tips for actually pulling it off, which we've included below. And if you're looking for destinations on your globetrotting adventure, check out the secret places the ultra wealthy are escaping to this summer. 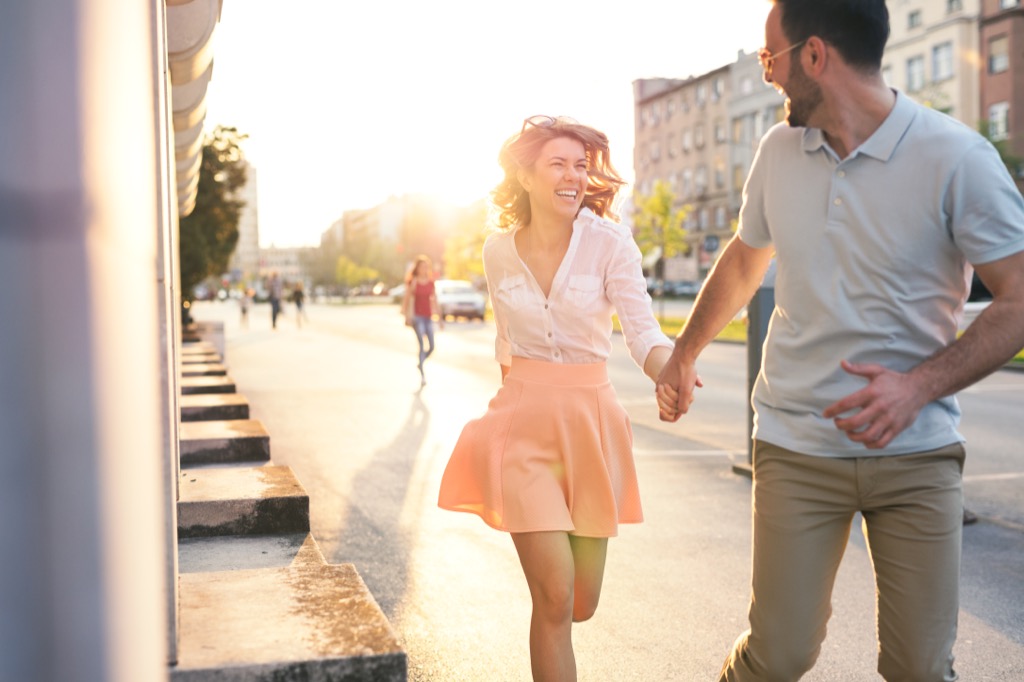 There are many reasons to postpone a trip around the world. Maybe you want to save up a little more, wrap up a project, or wait until your apartment lease is up. But when these deadlines arrive, chances are you will have yet another reason to delay things. Before you know it, your excuse will be "I'll be retiring soon anyway."

That was the case for Greg Naeseth and his wife Vanessa Oguchi. The two first met while teaching abroad in Japan and settled down in New York. He worked as an English teacher and photography assistant while she worked for the New York City Department of Education. But after a few years working in the city, they started feeling the urge to get back out and travel the world—but knew that waiting would only make it less likely they would actually go through with it "I was turning 40 and I knew I would have regretted it if I didn't do it," says Naeseth. "But also there's a point where traveling on a budget gets much harder, and less you tolerate as you get older."

So after considering the alternative (sticking with the sensible option of working full time and never knowing what it would have been like to drop everything and travel the world) they decided to pull the trigger. To save up enough money to travel the world, consider picking up one of the 20 most lucrative side gigs out there. 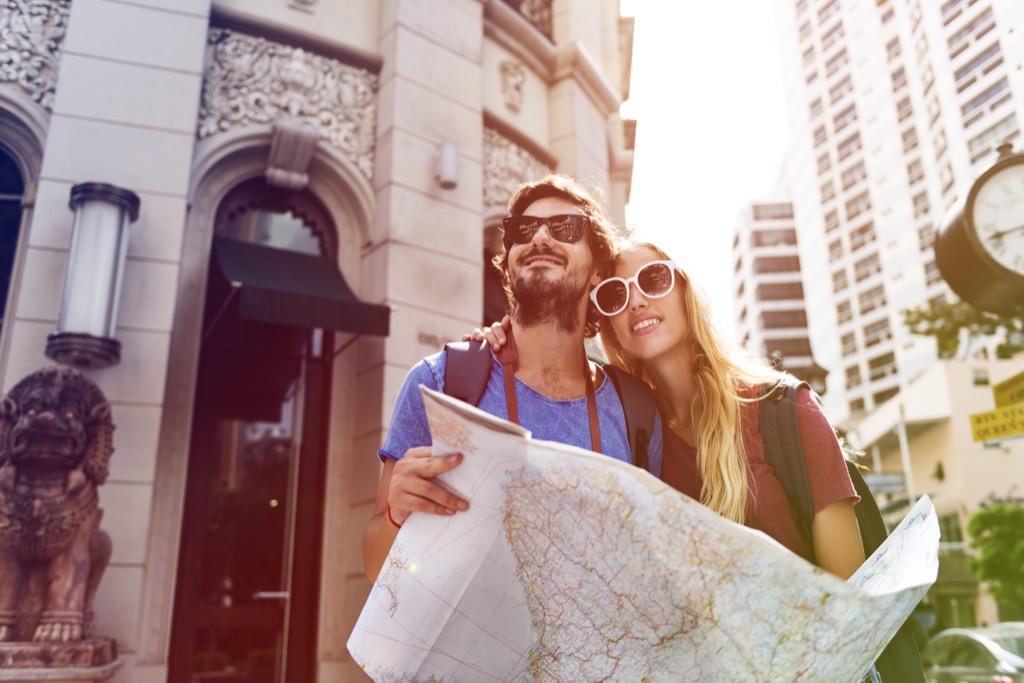 Those who make it work plan it out precisely, setting down a budget, timeline, and itinerary. That was the approach taken by Naeseth and Oguchi. There was a huge list of places they wanted to see, but a few firm specifics they knew—for example, to end up in Japan for Naeseth's 40th birthday in early April (which would also be when the famous cherry blossoms were blooming), and to spend at least a few months traveling through India.

They also set a strict budget for themselves, only spending $50 per day per person (as they were traveling through wallet-friendly spots in Asia and South America, this was totally doable). Doing the math, that came to about $18,500 for the year, excluding flights—a bargain compared to the cost of living in New York City. Though if you want to buck the couple's advice and splurge while you travel the world, consider stopping by the 15 most sumptuous airports on the planet. 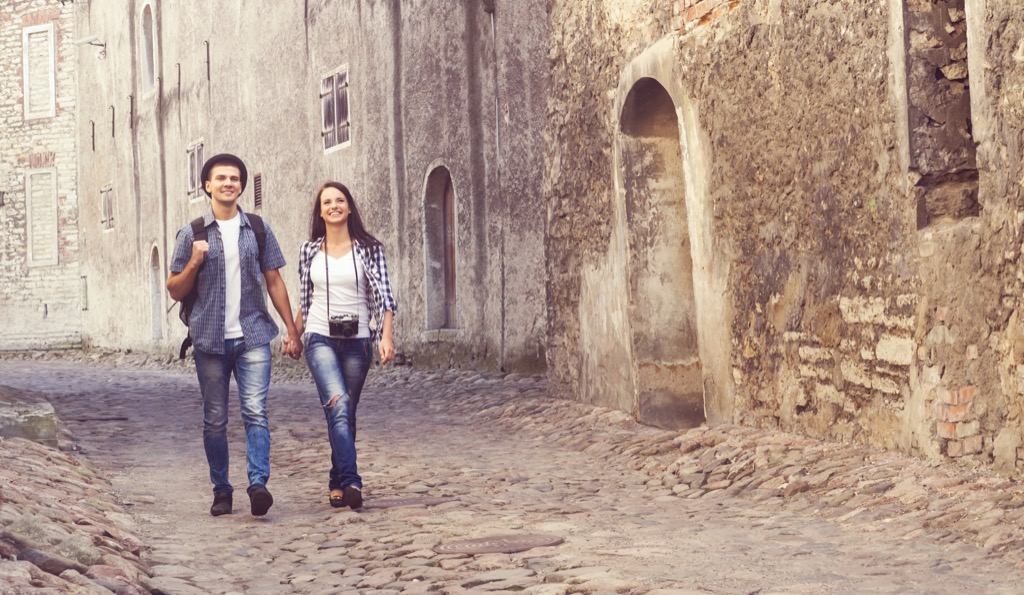 The biggest advantage of months-long travels is that it offers a chance to shift from "vacation mode" to "immersion mode."

"It's easy to go to a new country for a few days and see the main attractions: the Eiffel Tower in Paris, Big Ben in London…they're all nice, but when you plan trips around sights, you never get to actually experience a new way of living," says John Crestani, who spent months traveling through Europe, then followed the path of the boy in the book The Alchemist through Tarifa to Morocco and Egypt, and then to Dubai and Fiji. "When you truly experience a new culture, and a new way of living, you start to question everything that society tells you that you need to do growing up—and that's scary."

Crestani, who runs an affiliate marketing business that he's made operate without his direct day-to-day involvement, took his trip when he realized he had a conference in London and one in Fiji four months later. He set those two dates and places as the only items on his calendar and scheduled in "world travel" in between.

While Naeseth and Oguchi didn't spend more than a couple days in any one city, they kept their schedule flexible. After considering buying an around-the-world ticket, they ditched the idea when it was clear there were a lot of restrictions involved in that, only allowing them to go one way and with no backtracking.

"We wanted to be a little more spontaneous," he says.

They had the first couple months well planned out—going through Europe (Paris, Bordeaux, San Sebastian, and Barcelona), then Morocco and Tangiers, Egypt and Jordan—but left the specific timeline, outside of the occasional flight, fairly open.

This allowed them to take advantage of some incredible moments: an overnight camel trek through a Moroccan desert, accompanied with a cook prepared their meals by campfire (all costing well below their $50/day budget). Then there was a ride up the Nile for two days in a felucca (a small, motor-less sailboat with room only for them, a cook, and a guide).

"Egyptian tourism was flat at the time, so there was nobody else out there—we saw maybe one other boat of tourists the whole time," says Naeseth.

4
Accept That Some Things Will Suck 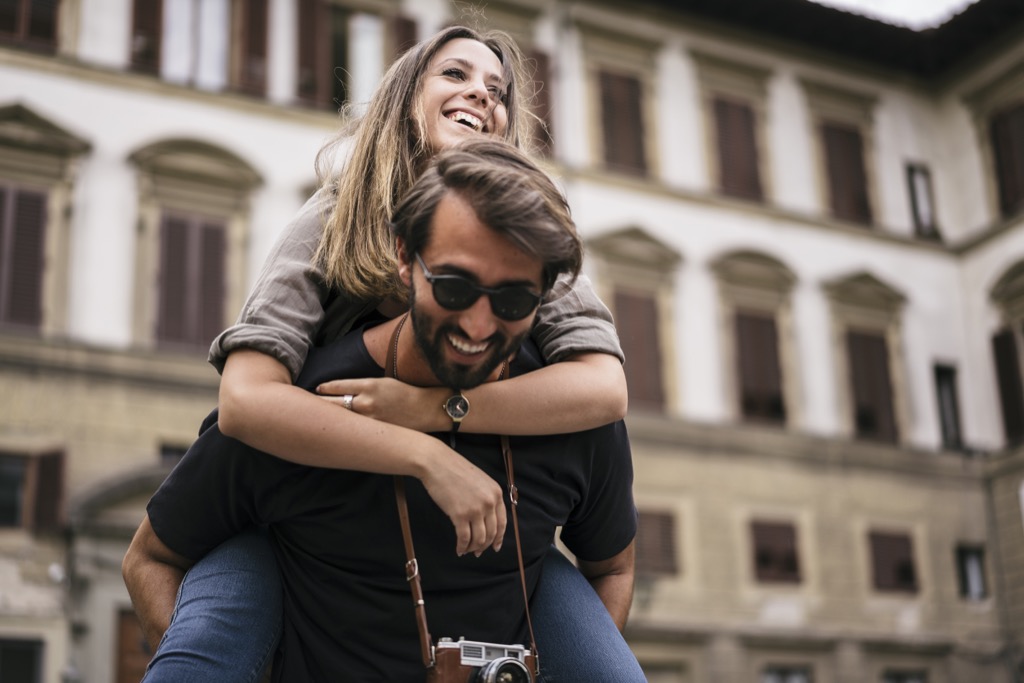 While you travel the world, not everything is a perfect moment. In fact, there are going to be moments, or even weeks, that suck. Crestani's experience in Egypt was much less pleasant than Naeseth's. "I have been to 50-plus countries, but Egypt was the first place where I was blackmailed, robbed, and assaulted—in three separate incidents," he says. "And I heard similar stories from many other backpackers."

For Naeseth and Oguchi, the low point of their travels was a bus in Bolivia, toward the tail end of their year of travels (following extended travels through India, Southeast Asia, Japan, and China, they made their way to Latin America). A flight across the country would have blown their already dwindled budget, so they opted for a bus ride that would take about 14 hours. Long, but doable.

What they didn't realize was that a number of unions were in the midst of strikes, which in Bolivia involved not just protesting, but blocking major roads. The bus drivers were forced to reroute, turning the 14-hour trip into a 27-hour one. Making the long ride no easier was the freezing temperature, winding and poorly maintained roads, and fact that the driver was taking swigs out of a whiskey bottle. The craziest moment came in the middle of the night, as the bus tried to navigate a hairpin turn on a dirt road. There was not enough room for the bus to make the turn, but it could not go back the other direction.

"We got out of the bus and had to help the local guys grab big rocks and put them under the front wheels so they could somehow drive it and keep the bus from tipping over," says Naeseth. Miraculously, it worked out, but the two avoided buses in Bolivia from that moment on. To prevent yourself from a similar situation when you travel the world, you might want to learn how to maximize your airline miles, in some cases scoring free flights. 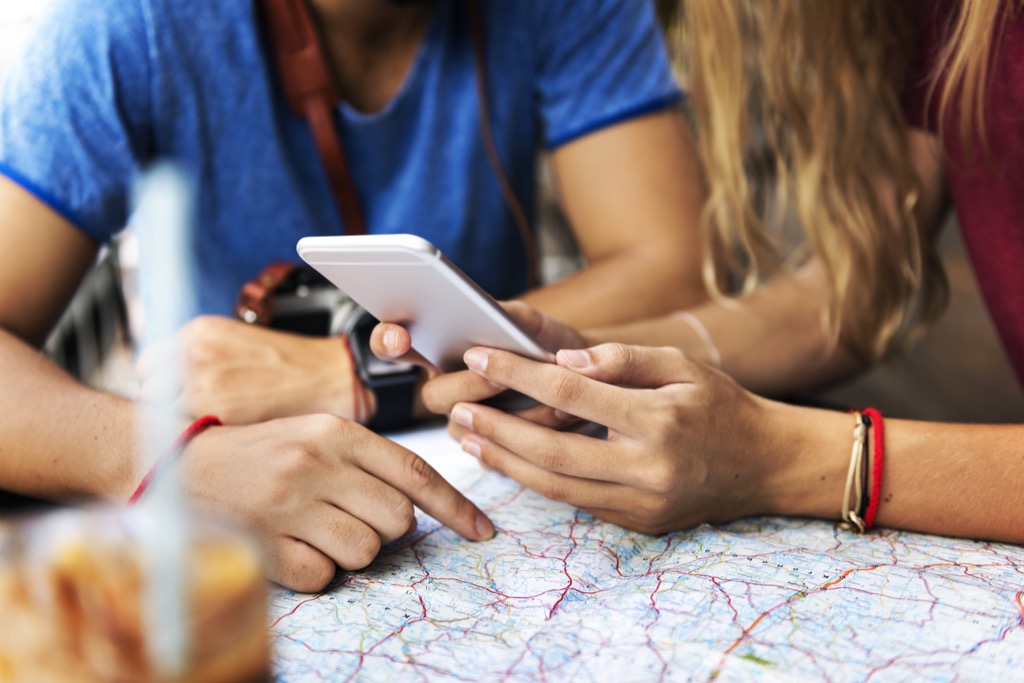 While some bumps along the road will inevitably happen, studying up on each destination goes a long way toward avoiding them. But more importantly, it helps travelers connect more deeply with the places.

Naeseth and Oguchi got a basic travel book for any country they visited, and in countries like China or India, they dug deeper, consulting foreign government websites and the U.S. State Department's site to figure out what visas, vaccines, and other requirements might be involved. Crestani recommends checking Nomadlist.com to see what other travelers are saying about specific destinations and hotels.

"Many of the users fund their travels through businesses that require an internet connection," he says. "Be aware of whether or not the country you are traveling to has regular, rolling brownouts or blackouts. One thing we take for granted in many western countries is that the power grid is very consistent. That just isn't the case in many developing countries, and when the power goes out, basically every connection will stop working. I've run into this problem in places like the Dominican Republic, Haiti, Cuba, Egypt, Fiji, and more."

For those trying to stay connected to colleagues or friends while taking such a long journey, confirming there is WiFi where you are going is essential. Crestani, who relies on a strong Internet connection for his business, that means going further: "I email the location and ask them to send me a screenshot of their WiFi connection after checking on speedtest.org—some of the places that advertise WiFi, are really just working off of a tethered cell-phone connection." When it's your turn to travel the world, see how many cities you can check off on the list of 20 cities you must visit before you die.

6
Trust in the Universe 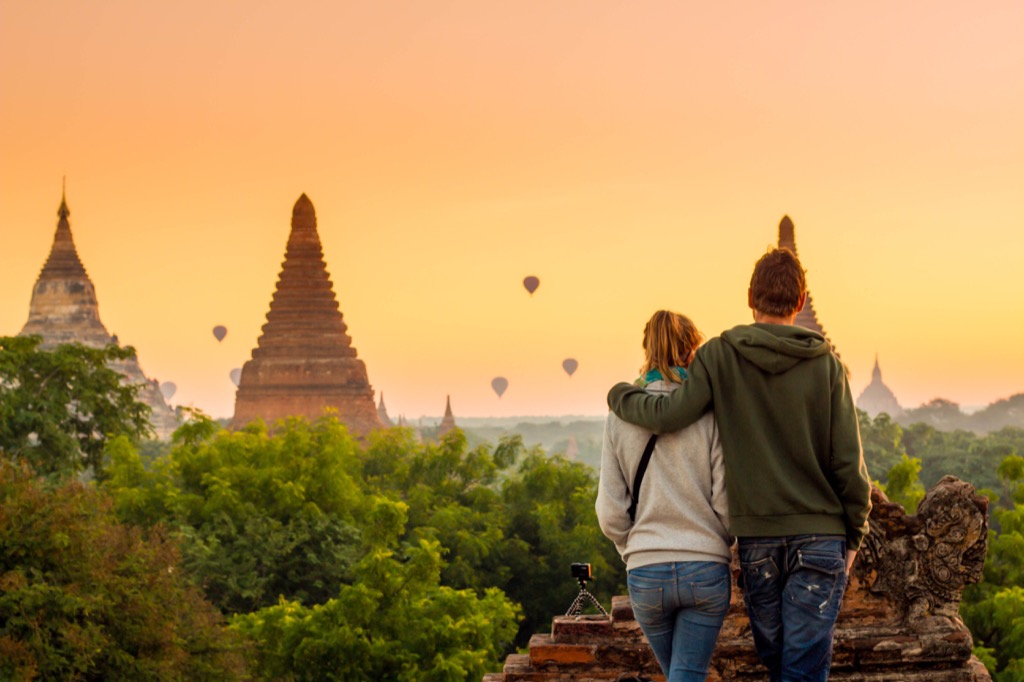 The most important thing for anyone thinking of putting their usual life on hold to travel the world: trust that things will work out.

"People are scared of 'life wide open,' because it means they have to actually ask themselves hard questions, such as: what do I really want to do? Where do I want to be? Who do I want to be with? What is my mission?" says Crestani.

But he emphasizes that accepting these fears as natural and taking a jump anyway is what makes an ambitious trip around the world such a powerful experience.

For Naeseth and Oguchi, it was more tangible questions about work, budget, and where they would live when they got back.

They considered subletting their place, which would have provided the security of giving them a place to return to—along with plenty of downsides: It would have also meant family or friends having to check in on the subletter or handle things if the renter moved out. And it would require they return in exactly a year, removing a bit of freedom from the travel schedule.

They ended up just letting the apartment go, quit their jobs, and trusted that things would just work out.

And they did. Upon returning, Naeseth not only got both his jobs back, but their exact same apartment was available the month they got back to the city. The exception was Vanessa.

"She didn't get her job back when she got back," says Naeseth. "She got a better one."

Alex Daniel
A journalist based in Brooklyn, New York. Read more
Filed Under
Adventure • Travel Advice • Vacation
Read This Next
Latest News
Read This Next