This Is the Scariest Weather to Fly Through, Pilots Warn

The sudden condition can feel like "hitting a giant speed bump at 500 miles an hour."

Coming across lousy weather on a travel day usually means you can count on a flight delay or cancelation when you're on the ground, but it's very different to experience adverse conditions once you've already taken off. Fortunately, a combination of pilot expertise, strict regulations, and advances in technology have made fatal accidents exceedingly rare for the American commercial airline industry: According to Federal Aviation Administration (FAA), there has been only one death and no fatal crashes in the U.S. since 2009. Regardless, there's no denying that a bumpy flight can quickly stir up nerves—in some cases, even for seasoned professionals. And according to pilots, there's one type of weather they find the scariest to fly through. Read on to see what industry pros hope to avoid at all costs.

RELATED: Never Forget to Do This After Boarding, Flight Attendant Warns.

Pilots say sudden updrafts can be the scariest weather to fly through. 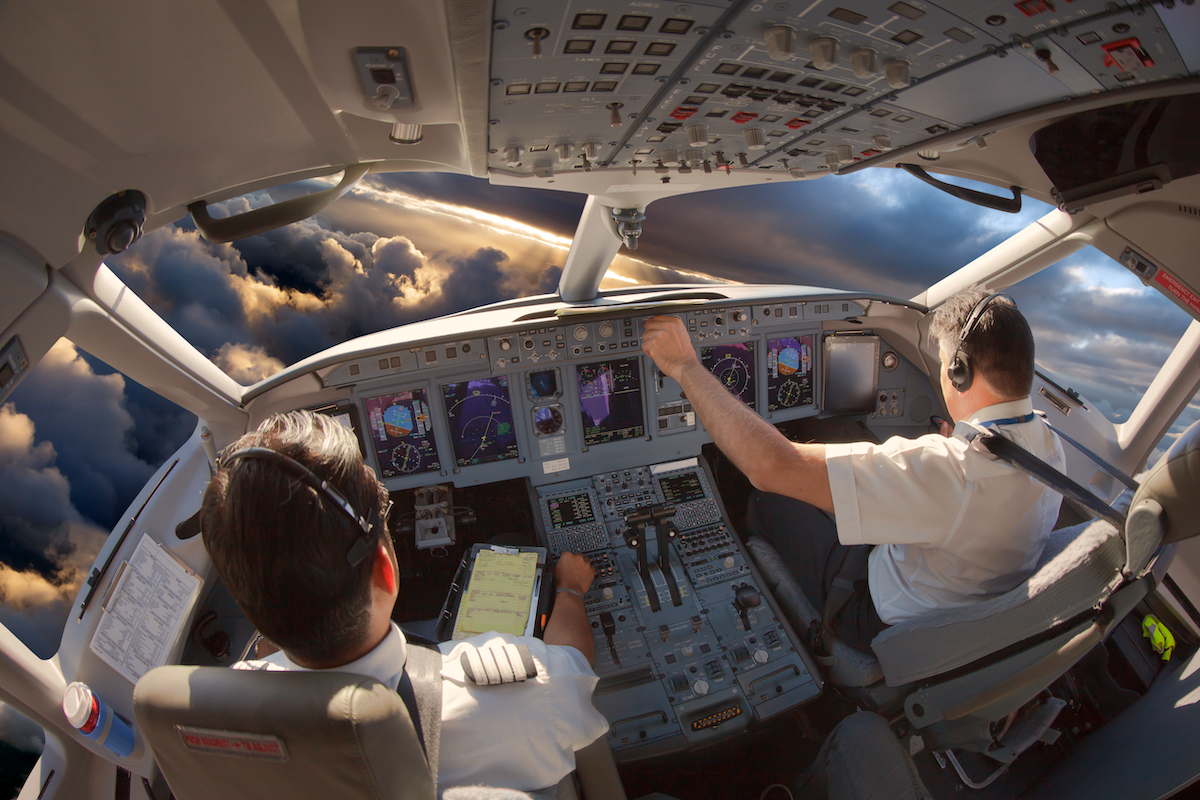 We've all felt the spike of anxiety that comes with the "fasten seatbelt" light suddenly turning on mid-flight. And while bumps in the sky are simply a part of travel, pilots say that encountering a sudden updraft is the one weather condition they dread the most. In fact, the atmospheric conditions can be as jarring for the crew as they are for passengers.

"A plane flies into a massive updraft, which you can't see on the radar at night, and it's like hitting a giant speed bump at 500 miles an hour," John Nance, aviation safety analyst and retired airline captain, told Reader's Digest. "It throws everything up in the air and then down very violently. That's not the same as turbulence, which bounces everyone around for a while."

Updrafts result from rising warm air that can appear during the formation of thunderstorms.

According to experts, updrafts can develop even when it seems like there may be fair weather to the untrained eye. "[Updrafts appear] on unstable—often partly cloudy—days as pockets of warm air rise, sometimes forming shower and thunderstorm clouds," Greg Forbes, PhD, severe weather expert for The Weather Channel, explained in a 2012 interview. "While pilots avoid flying through strong thunderstorms, sometimes the updrafts in the smaller clouds and showers can cause turbulent bumps."

In some cases, unexpectedly hitting the patch of rising air can very suddenly lift a plane to dangerously high altitudes. This can then cause pilots to take hard corrective measures to bring the aircraft back on course, which can result in very sudden drops or potentially send it briefly spinning out of control.

General turbulence is less like to cause a serious issue on a flight.

Even though unexpected changes in wind direction can create drastic and frightening effects onboard, pilots say that the everyday bumps and jostles experienced during most flights are manageable and can usually be detected with plenty of warning time. "Turbulence is an aggravating nuisance for everybody, including the crew, but it's also, for lack of a better term, normal," Patrick Smith, the editor of the website Ask the Pilot, says. "From a pilot's perspective, it is ordinarily seen as a convenience issue, not a safety issue."

And if you notice your plane ascending or descending after hitting a few bumps, it's not necessarily an act of panic. "The pilots aren't worried about the wings falling off; they're trying to keep their customers relaxed and everybody's coffee where it belongs. Planes themselves are engineered to take a remarkable amount of punishment," Smith explains.

You can stay safe during your flight by listening to the crew and keeping your seatbelt fastened at all times.

Fortunately, pilots are well trained to deal with even severe turbulence and can usually go out of their way to avoid any major bumps in the sky. "The great thing about aviation is that you're traveling within a three-dimensional space," Clark Morawetz, a commercial pilot, told Canadian outlet Global News. "You're not confined to a road. When we're traveling through the skies [and] we can see evidence of potential turbulence, we can avoid it by requesting a diversion from air traffic control."ae0fcc31ae342fd3a1346ebb1f342fcb

Still, pilots can be caught off guard by sudden changes in weather or instruments missing the disturbance ahead of time. "That's why it's always a good idea to stay in your seat and wear your seatbelt, even if the seatbelt sign is off," Morawetz recommends.

And if you're still feeling nervous about hitting updrafts or rough patches in the sky, you can rest assured that experiencing it rarely results in much more than a few spilled drinks. "Because airliners fly at a high altitude, there's plenty of time to recover from most severe turbulence encounters," Morawetz explains. "It might be a moment of discomfort for people, but the pilots do everything that they possibly can to avoid flying through turbulence. And, for us, safety and comfort are very high priorities that we take very seriously."

RELATED: If You Hear This on Your Plane, It Might Be an Emergency, Flight Attendant Warns.