If You Live Here, Watch Out for This Venomous Snake in Your Backyard

Experts say to keep an eye out when spending time in your home's outdoor space.

The return of warm summer weather means that the backyard is once again open for business when it comes to gardening, relaxing, and entertaining. But the spike in temperature also means that particular creatures are becoming more active again, including reptiles. And depending on where you live, you may want to be careful of one type of venomous snake in your backyard this season. Read on to see which hard-to-spot serpent should be on your radar.

READ THIS NEXT: How a Snake Can Get Into Your Home Through Your Toilet.

Snakes can leave behind some hints that they're hiding in your yard.

Whether you have keen eyesight and a wealth of animal knowledge or not, it's no secret that snakes can be one of the hardest creatures to spot in nature. Their slithering bodies and timid nature make them more likely to stay hidden than get in your way. But just like other animals, there is a way you can tell they're in your yard before you actually see one.

"A common sign that you have a snake infestation is finding snakeskin around your property," Toby Cahoon from B&T Pest Control tells Best Life. "They shed their skin as they grow, so finding old skin around is a good sign that they're currently living in your yard."

And even though they may lack the anatomy to leave paw prints behind them, snakes can still leave a telltale marker of their own on the ground. "Because most snakes move in a very unique and distinct way, it actually makes them a bit easier to identify their trails and where they've been traveling on your property," Burns Blackwell, owner of Terminix Triad in North Carolina, tells Best Life, adding that you should keep eyes peeled for a side-winding pattern in the dirt or grass.

Residents of certain states should beware of one well-camouflaged type of venomous snake in their yards.

If you do happen to find evidence of snakes on your property, it may not necessarily be a bad thing: The reptiles act as predators that can help rid your garden of common pests and help promote a healthy ecosystem. But if you live in certain areas, the risk of coming across a venomous variety is also a possibility—especially the copperhead snake, which can be particularly difficult to spot in your backyard, The Washington Post reports.

Copperheads are particularly dangerous because of their hiding habits. 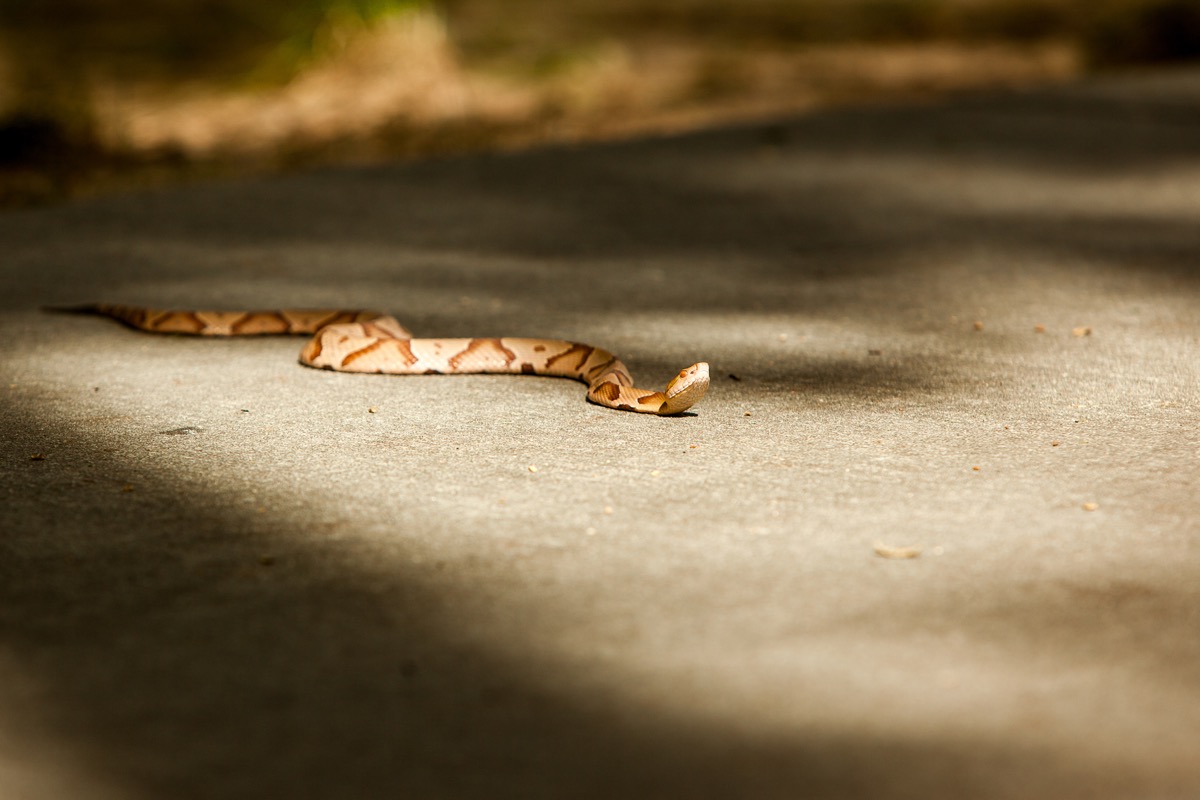 Thanks to the naturally effective tan and brown camouflage pattern that runs down their back, copperheads have an advantage when it comes to staying unnoticed. The snake is also known to stay still in one place for long periods, and while they're not naturally aggressive, it can be challenging to see one before it's too late and they strike defensively, according to The Post.

Even though staying vigilant can help you avoid getting bit, copperheads are responsible for more snakebites than any other species in the U.S. each year, according to the North Carolina Cooperative Extension at North Carolina State University, per CBS News. If any venomous snake ever bites you, you should call 911 and seek medical assistance at a hospital right away, Spencer Greene, director of toxicology at HCA Houston Healthcare-Kingwood in Texas, advises. You should also remove any restrictive clothing or jewelry from the affected area and elevate the extremity above your heart while awaiting treatment.ae0fcc31ae342fd3a1346ebb1f342fcb

And while the live young that copperheads give birth to pose a unique danger due to their tiny size, there is one outsized misconception about them that persists. "Contrary to popular belief, babies are born with the ability to control how much venom they deliver. Because they possess less venom than adults, their bites tend to be less significant," Greene told The Post in an email. "That said, a bite from a pit viper of any age can be mild, moderate, or severe."

Here's how you can lower your risk of finding a venomous snake in your yard.

To some degree, coming across any kind of snake in your yard is an inevitability. But according to experts, there are still a few ways you can minimize your chances of attracting the wrong types by making a few changes to your property.

"Snakes are known for being attracted to tall grass because it provides them with cover and makes it easier for them to hunt prey," Craig Zeigler, owner of Agronomic Lawn Management, tells Best Life. "The best thing to do is to cut down the grass and remove any other potential hiding spots," including keeping dense brush near your home trimmed and removing woodpiles or decorative rock piles.

It's also best to move any bird feeders and birdbaths away from your home and keep all pet food indoors. This will prevent attracting birds and rodents—a preferred meal for copperheads—and remove a standing water source for them, Kimberly Wyatt, assistant professor of biology at Good Samaritan College in Ohio, tells The Post.

READ THIS NEXT: You're Inviting Snakes Into Your Home If You Use This on Your Lawn.

Zachary Mack
Zach is a freelance writer specializing in beer, wine, food, spirits, and travel. He is based in Manhattan. Read more
Filed Under
Garden • Home • News • Pests • Safety
Read This Next
Latest News
Read This Next