The 10 Best U.S. Cities to Visit for Sports Fanatics

From baseball to hockey and everything in between, these places make for great trips.

Whether they're small and gritty or big and flashy, some cities are simply competitive by nature. And it's not just about bragging rights over which locale has the best cuisine or most impressive buildings: Sometimes, local teams and essential sporting events can help define how a city presents itself to the world. While taking in a game from the comfort of your living room can still be an enjoyable pastime, there's no replacement for walking into a stadium and sitting under the lights for the real thing. If you're looking for the unmistakable energy of die-hard supporters or want to pay homage to the all-time greats, plenty of places are worth a trip. Read on to see the best cities for sports fanatics to visit.

READ THIS NEXT: The 6 Best Off-The-Radar Destinations in the U.S. That Need to Be on Your Bucket List.

Not all big cities have a sports culture to back it up. But the second-largest city in the U.S. also happens to be home to successful teams across the spectrum that bring an energy of their own to the town.

"Leave the beach and head to some of the best sports venues leading off with the new Sofi Stadium, home of the Los Angeles Rams and the Los Angeles Chargers," Jay Smith, owner and founder of Sports Travel and Tours, tells Best Life. "While SoFi Stadium boasts one of the lightest structural roofs in the NFL, it still hangs the largest center-hung video board in the world."

"If football isn't your game, add on the amazing Dodger Stadium in Chavez Ravine, where baseball lovers kvell over Dodger Blue," he adds. "The L.A. Lakers and Kings have both held the championship flags in their respective sports where you can always catch some celebrities courtside in any given game."

The city also can boast some major athletic events beyond successful home teams. After hosting the Super Bowl in 2022, L.A. is preparing to be a host city for the 2026 FIFA World Cup and the 2028 Summer Olympic Games. 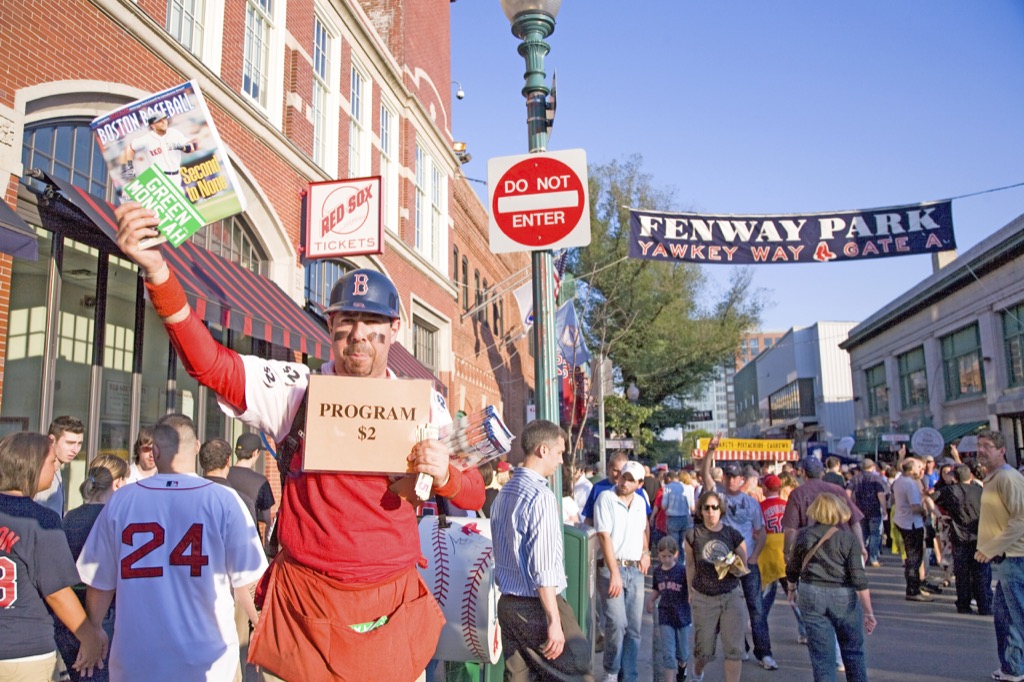 Sports culture can ebb and flow within a city depending on its recent successes. In the case of Boston, an epic spell of lousy luck helped to solidify local allegiance to teams as an inextricable part of its culture. Naturally, this has worked well for a city that has seen quite the reversal of fortunes in recent years, with legendary teams playing in historical buildings, making it a must-see for any fan of organized sports.

"Boston has experienced its fair share of sporting success. For instance, in the past 50 years, the Celtics have won not one, not two, but an incredible seven championships," says Phillip Imler, PhD, founder and president of the Global Alliance of National Parks. "The Bruins also won two Stanley Cups in the 1970s, which was another proud decade for sports in the city, and replicated the achievement in 2011."

"But perhaps most notably, the Red Sox overcame the 86-year drought by winning the World Series in 2007, 2013, and 2018; as a result, locals and visitors can now take a tour of Fenway Park, the team's historic home. And let's not forget the New England Patriots, who have won the Super Bowl an amazing six times under the guidance of Coach Bill Belichick and quarterback Tom Brady, are undoubtedly Boston's pride," Imler says.

Outside of the acclaim and enthusiasm generated by its local teams, the Hub has another annual claim to fame as the host of the Boston Marathon. The 26.2 is arguably the most well known of its kind in the world, bringing in athletes and spectators from around the globe in a beloved event that creates a truly unique atmosphere.

Baseball holds a special place in American history as the nation's pastime. That's why its birthplace in the Northeast has become a top bucket list item for even casual fans of the sport.

"Cooperstown is a baseball fan's dream!" says Smith. "It's a small, quaint New York town with what feels like Main Street USA. All the local shops are locally owned, and the chain stores are nowhere to be found. It also eats, smells, and breathes baseball, where the few blocks downtown is a baseball fans' heaven. Of course, there's also the National Baseball Hall of Fame and Museum, where the history of baseball is shared amongst the hallowed walls featuring the plaque gallery and exhibits for all ages."

For more travel advice delivered straight to your inbox, sign up for our daily newsletter.

There's no denying there's plenty to do and see in San Francisco. But thanks to a recent string of titles across its local teams—along with its across-the-bay neighbor, Oakland—has become a go-to destination for a family-friendly trip with no shortage of athletic action.

"San Francisco is the perfect destination for a sports fanatic," Erin Moreland, travel blogger at Super Simple Salty Life, tells Best Life. "Between the San Francisco Giants in baseball, the 49ers in football, and Golden State Warriors in basketball, local San Franciscans have plenty of home teams to support and cheer on. You can feel the love for their sports all over the city!"

Even though it may not be home to any major league teams, Louisville is nothing short of iconic when it comes to major sporting events and figures.

As the birthplace of one of the world's greatest fighters, the Muhammad Ali Center allows visitors to learn about the life and legacy of the Olympic gold-medalist and boxing icon at a six-story museum and cultural center. And even if you're not in town for the race itself, you can still learn and experience the "most exciting two minutes in sports" at the Kentucky Derby Museum. Fans can get a behind-the-scenes tour of Churchill Downs, see a 360-degree minute film on the race, and explore exhibits highlighting the 149-year-old sporting event.

For baseball fans, there's the Louisville Slugger Museum & Factory. Located right downtown on Main Street, the world's largest baseball bat marks the entrance with a 120-foot tall replica of Babe Ruth's 1920s Louisville Slugger. Inside, fans can see how the iconic bats are made while perusing historic baseball memorabilia and artifacts.

Some sports towns are made famous by their seas of championship trophies or iconic events. Others just make it simple to enjoy as many home games as possible.

"Not only is Denver a hip, cool place to visit on its own, but it's also one of the few U.S. cities home to teams from all four of the major U.S. sports—and they're all in Denver proper, not in surrounding suburbs," Tori Petry, an advisor with Fora Travel, tells Best Life. "If you pick the right time in October, you could hit games from at least three of the teams, with the Avalanche and Nuggets sharing Ball Arena and the Broncos playing at the iconic Mile High stadium."

READ THIS NEXT: The 10 Best Casinos in the U.S. If You Love to Gamble.

It's rare that a city can be known for both its local teams and a world-class sporting event, but Indianapolis has found a way to make it happen. Because of this, experts point out that a trip there can be a sports fan's dream come true.

"Indy is an unsuspecting powerhouse when it comes to sports. Not only does this city have major sports teams like the Indiana Pacers, Indiana Fever, and Indianapolis Colts, but you also have the iconic Indianapolis Motor Speedway and the IMS Museum, which is located inside the 2.5-mile race track," Samantha Lechlitner-Lewis, a travel expert and associate editor from Roadtrippers, tells Best Life.

"Downtown, sports fans can check out the NCAA Hall of Champions, an interactive museum featuring some of the biggest names in collegiate athletics. Or, if you have kids in tow, you can venture to the Children's Museum of Indianapolis where kids can participate in a variety of sports at the Riley Children's Health Sports Legends Experience," she suggests.

Planning a trip when you have accessibility concerns in mind can be difficult, no matter your focus. But one Midwestern city makes it easy to take in home games for anyone who wants to see them.

"Minneapolis is a great city for sports fans, especially those in wheelchairs," says Sylvia Longmire, accessible travel expert at Spin The Globe and Scootaround Ambassador. "It's very easy to get to both Target Field and U.S. Bank stadium downtown either with public transportation or just rolling through the elevated indoor and climate-controlled walkways."

And it's not just sports where the city thrives. "Minneapolis also has wonderful wheelchair-accessible sites, like Mill Ruins Park, the Walker Art Center, and the huge Mall of America in nearby Bloomington, all of which are easy to reach using accessible public transportation," she adds.

Some say that Las Vegas is a city that is always changing while forever staying the same. And even though there are still plenty of casinos and poolside parties to be had there, the town has also been able to create a local sports scene almost as quickly as it takes to play a round of Blackjack.

Although Las Vegas has historically been known as the entertainment capital of the world, it has recently been dubbed the sports capital, too. Within just the last five years, Las Vegas has welcomed the Vegas Golden Knights—the destination's first-ever professional and NHL team—and the now Las Vegas Raiders in their new home at Allegiant Stadium. And then there's the playoff-bound WNBA Las Vegas Aces.

Next year, Las Vegas will make history and host a nighttime Formula 1 race along the iconic Strip, and will host the Super Bowl the following year. All of this is just in addition to ongoing tournaments and events that appeal to all sports fans, including the NBA Summer League.

READ THIS NEXT: 10 Best Cities in the U.S. for Outdoor Adventures.

As the smallest city to host an NFL team, Green Bay holds a special distinction as a location with a famously large spirit that greatly outweighs its local population count. For decades, fans of all sports allegiances have made the journey to Wisconsin to take in the energy of a coveted home game, braving temperatures that can dip well below freezing for the experience.

"If you are going just specifically for the Packers, then you can take a tour of Lambeau Field, stroll along The Walk of Legends to take in the 24 statues that chronicle the history of football in Green Bay from 1895 until today," Emily Smith, a former travel agent and current travel writer for The Female Abroad, tells Best Life. "If you are in town on the right days, you could watch the team during summer training camp, which usually runs in late July. Once you are done exploring Lambeau Field, head to Titletown to enjoy various entertainment, including a skating rink, bowling, shopping, and restaurants in a 45-acre complex right across the street."

Zachary Mack
Zach is a freelance writer specializing in beer, wine, food, spirits, and travel. He is based in Manhattan. Read more
Filed Under
Destinations • News • Sports • Travel Advice
Read This Next
Latest News
Read This Next