Research suggests they may be able ignore insect repellents.

Spring is upon us, which means that summer is right around the corner. With all of the benefits warmer weather brings our way—summer break, trips to the beach, barbecues—for those in relevant climates, it also means the arrival of seasonal pests. We reach for the insect repellent to keep bugs away, preventing uncomfortable bites and potential disease. But what if your tried and true bug spray doesn't work this year? Read on to learn which insect may now be able to ignore your bottle of OFF! or Cutter.

RELATED: If You See This Bug in Your Home, Call an Exterminator Immediately.

A recent study found that mosquitoes may be able to ignore common insect repellents. 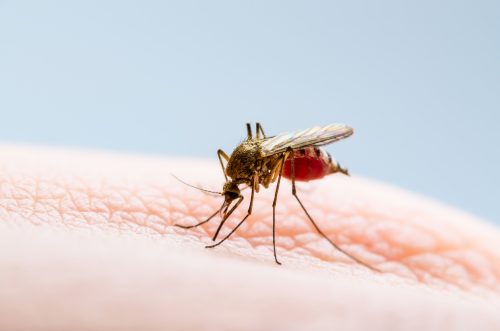 Mosquitoes are among the peskiest variety of bugs, and their bites can trigger an itchy and uncomfortable reaction. To make matters worse, findings recently published in Cell Reports suggest that a newly-identified process in mosquitoes' odor sensing nerve cells may make them able to ignore the bug sprays. Data suggest that nerves in mosquitoes' olfactory systems—involved with the sense of smell—shut down when they are prompted to produce odor-related proteins, or receptors, on the surface of the cell. These receptors are directly involved with how these pests locate and approach human prey.

When starting their investigation, researchers at Johns Hopkins Medicine anticipated seeing similar reactions in fruit flies and mosquitoes when new odor sensors were forcibly expressed. But unlike fruit flies, which fly away from unappealing smells when their odor sensors are forced to express odor-related proteins, mosquitoes' sensors shut down, allowing them to ignore smells they don't like, i.e., insect repellents.

Results were "surprising" to researchers."

We've come to rely on bug sprays to prevent bites before they happen, but mosquitoes also pose a greater threat to humans by spreading viruses such as malaria and Zika. To combat potential health risks, researchers continue to explore solutions to "trick" mosquitoes into no longer preferring or liking the smell of humans, ScienceDaily reported.

Investigators used Anopheles mosquitoes (the kind that transmit parasites that cause malaria) that were genetically modified to have over-expressed AgOR2—an odor receptor that responds to humans via animal odorants. In the current study, it was determined that these modified mosquitoes were able to ignore odorants in common repellents, such as lemongrass.

"When experiments don't go as predicted, there's often something new to be discovered," Christopher Potter, PhD, associate professor of neuroscience at the Johns Hopkins University School of Medicine, told ScienceDaily in regards to the "surprising" findings. "Mosquitoes are so much trickier than we thought," he added.

Investigators cited the need to test the theory that these mosquitoes are able to adapt to the odors in the environment while moving to adulthood (about eight days after hatching).

RELATED:For more up-to-date information, sign up for our daily newsletter.

Another recent study found that mosquitoes are more attracted to certain colors.

While it may be distressing to think that bug sprays won't be as effective over the coming months, there are other preventative measures to consider. Findings published in Nature in February found that mosquitoes may be more attracted to colors like red, orange, black, and cyan, meaning you'll want to avoid wearing these in the summer.

Lead author for the color study, Jeffrey Riffell, PhD, professor of biology at the University of Washington, explained to Newsweek that mosquitoes can smell carbon dioxide (CO2), unlike humans, which then activates their visual senses to locate the host. To put it simply, they sniff us out.

According to researchers, this again has to do with olfactory systems, and the attraction is better explained by the fact that the color red is located in human skin.

"No matter what your pigmentation or skin tone, across all humans, we're really reflecting in these colors. [I]t's tricky," Riffell told Newsweek. "The mosquitoes have all of these redundant systems, so they're not only detecting us by CO2 but they're looking at us visually for red, but they're also looking for heat or body vapor for sweat."

What can I do to avoid mosquito bites this summer?

With insect repellent potentially not as effective, you may want to explore other avenues. The Centers for Disease Control and Prevention (CDC) recommends different tactics such as wearing long-sleeved shirts and long pants, using screens on windows, turning on the air conditioning, and preventing the accumulation of standing water—which provides breeding grounds for mosquitoes to lay their eggs.ae0fcc31ae342fd3a1346ebb1f342fcb

Insect repellents do remain on the CDC's list of ways to protect against mosquitos, particularly Environmental Protection Agency (EPA)-registered insect repellents that include "safe and effective ingredients" like DEET, picaridin, IR3535, oil of lemon eucalyptus, para-mentha-diol, an 2-undecanone.

RELATED: If You See This Scary Bug in Your Home, Don't Kill It, Experts Warn.