Here's one photo for every year she's been in the spotlight, from "Friends" to "The Morning Show."

While she had credits on her resume before that, Jennifer Aniston became a household name when Friends made its debut back in the mid-'90s. And since then, she's rarely been out of the spotlight. It seems like only yesterday, Rachel Green was running into Central Perk in her wedding dress, but in reality, Aniston has been a major player for over 27 years. To celebrate Aniston's 52nd birthday, we've rounded up one picture from each year she's been famous to see just how far she's come. These photos can't sum up all the reasons we love Jennifer Aniston, but we tried.

And to see what the teen stars of Aniston's breakthrough decade are doing today, check out The Biggest '90s TV Teen Idols, Then and Now.

In 1994, Friends premiered on NBC, with Aniston playing rich girl Rachel Green, who runs out of her wedding and into New York City to start her life over. Prior to that, her biggest credit was 1993's Leprechaun.

For more A-listers who've dabbled in scares, check out 30 Celebrities You Forgot Were in Horror Movies.

Friends concluded its first season in the spring of 1995 as a certified hit. That year, Aniston also guest starred on The Larry Sanders Show and appeared with the rest of her Friends cast mates in the video for the show's theme song, "I'll Be There for You," by the Rembrandts.

In 1996, Aniston played Renee in the Edward Burns rom-com She's the One (above). She also dropped by the sitcom Partners, which starred then-boyfriend Tate Donovan (who'd also play Rachel's crush Joshua on Friends a couple years later.)

For the lines you still can't stop saying, check out The Movie Quotes Every '90s Kid Knows by Heart. 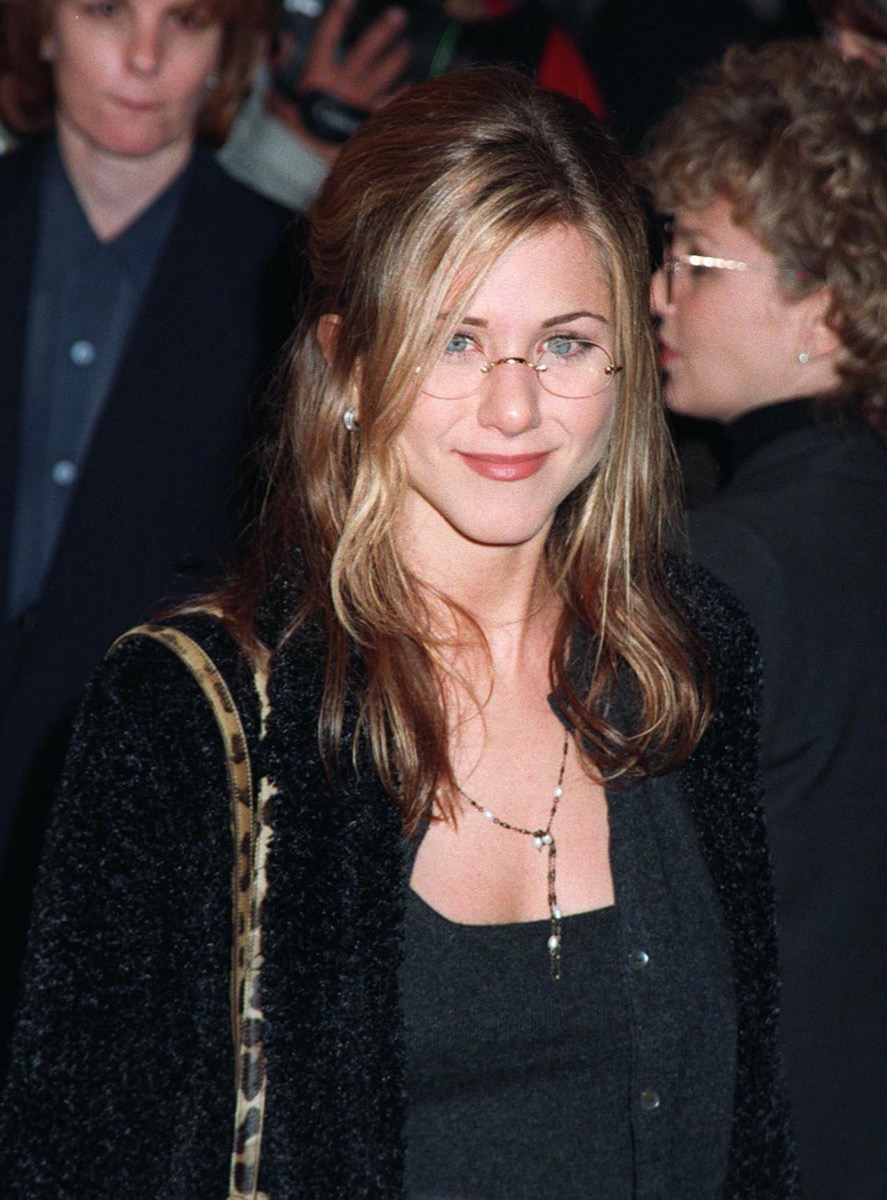 Already a red carpet staple (here she is at the Good Will Hunting premiere), Aniston starred in the rom-com Picture Perfect, opposite Jay Mohr.

Continuing to rule along with her roommates on the small screen, Aniston's biggest movie of 1998 was The Object of My Affection, in which she played a straight woman who falls in love with her gay best friend (Paul Rudd).

For dated terms from this era that you need to retire, check out 100 Slang Terms From the 20th Century No One Uses Anymore.

Yes, 1999 was also the year of the timeless workplace comedy Office Space, but Aniston fans remember it best as the year she and Brad Pitt got together, making their public debut at that Emmys.

And for more aw-worthy photos like this, here are 13 Photos of Celebrity Couples When They First Got Together.

Aniston and the rest of the Friends cast were nominated for tons of awards during the show's run. Here she is at the 2000 SAG Awards with Lisa Kudrow and David Schwimmer. They lost the comedy ensemble award, but Kudrow won Outstanding Performance by a Female Actor in a Comedy Series.

For series that feel timeless, check out 30 Beloved TV Shows You Won't Believe Are 30 Years Old.

In 2002, Aniston won her first (and to date, only) Emmy: a Lead Actress in a Comedy Series trophy for Friends. She also earned impressive reviews for the indie dark comedy The Good Girl.

For more entertainment and celebrity fun sent right to your inbox, sign up for our daily newsletter.

Aniston more than held her own with comedy whirlwind Jim Carrey in the comedy Bruce Almighty.

It had to happen eventually. Friends came to an end in 2004 after 10 seasons on the air. Easing some of fans' pain, Aniston teamed up with Ben Stiller for the rom-com Along Came Polly.

Aniston had two big movies in 2005: Derailed, a thriller costarring Clive Owen, and Rumor Has It (above), a comedy about a woman who starts to suspect that The Graduate is based on her family.

This was the year that Aniston starred in The Break-Up with her real-life boyfriend at the time, Vince Vaughn, playing one half of a couple who stubbornly tries to cohabitate after splitting up. She also had a role in the indie movie Friends With Money and made her directorial debut with the short film Room 10.

Aniston took a bit of a break in 2007, though she did drop by for a guest appearance on Courteney Cox's show Dirt. She also attended the People's Choice Awards to pick up her Favorite Female Movie Star trophy and was honored with the Vanguard Award at that year's GLAAD ceremony.

The actor's 2008 movies include the weeper Marley & Me and the rom-com Management. This was also the year that she co-founded the production company Echo Films.

As a part of its huge ensemble cast, Aniston appeared in the overlapping rom-com He's Just Not That Into You.ae0fcc31ae342fd3a1346ebb1f342fcb

Aniston split with Pitt in 2005 and dated Vaughn through 2006, before having flings with British model Paul Sculfor, John Mayer, and Bradley Cooper. Then, she and actor Gerard Butler were each other's dates for the 2010 Golden Globes, but their rumored relationship didn't last long. On screen, she starred with Jason Bateman in The Switch.

In 2011, the year Horrible Bosses and Just Go With It came out, Aniston was the star of her own handprints ceremony at Graumen's Chinese Theatre in Hollywood. That's new boyfriend (and eventual husband) Justin Theroux looking on with pride.

Another year, another Hollywood honor. The actor's dad, fellow actor John Aniston, was by her side for the unveiling of her Hollywood Walk of Fame star.

One of Aniston's 2013 films, Life of Crime, premiered at that year's Toronto International Film Festival (above). The other, We're the Millers, was a massive box office hit.

2014 was a busy year for Aniston—She's Funny That Way, Cake, and Horrible Bosses 2 all premiered.

Though she lost to Julianne Moore in Still Alice, Aniston was nominated for a 2015 Critics' Choice Award for her role in Cake.

This year, Aniston appeared in Mother's Day, another big, ensemble rom-com, as well Office Christmas Party. And she was one of the celeb voices in the animated comedy Storks.

Aniston's sole 2017 credit was the war drama The Yellow Birds—a departure for her. She also accompanied Theroux (they married in 2015 and have since split) to the premiere of the third season of his HBO show The Leftovers.

Aniston took part in two big Netflix projects in 2018: the Adam Sandler comedy Murder Mystery and the inspirational comedy Dumplin', which she also produced. But she also made time for friends like George Clooney, who was honored with the American Film Institute Lifetime Achievement Award. Here she is with Cox posing on that red carpet.

In 2019, Aniston returned to TV in a big way—producing and also playing an anchor on the Apple TV hit drama The Morning Show.

Aniston won the SAG Award for her Morning Show role and was nominated for an Emmy and Golden Globe as well. It's already set to return for a second season, proving Aniston's career shows no signs of stopping.

In early 2021, Aniston returned to work. She shared this mirror selfie with her hairstylist Chris McMillan on the set of The Morning Show Season 2. Apple TV has yet to announce a premiere date for the next season of the show, but it'll likely be later this year.