Hertz Is Under Investigation for Allegedly Renting Out Recalled Cars

The NHTSA received information that the company rented vehicles that hadn't been repaired.

It's one of the busiest travel times of the year, and many of us are getting ready to hop on a plane to see distant friends and relatives. Flying can be stressful enough, and then there's the added step of renting a car to make it to your final destination. If you plan on using Hertz, however, you'll want to be aware that the popular car rental service is currently in the hot seat for allegedly renting out recalled cars. Read on to find more about this ongoing investigation.

READ THIS NEXT: 5 Warnings From Former Enterprise Car Rental Employees.

Hertz is already on the hook for $168 million in settlement fees for a different matter.

It's been a tough month for Hertz, as the company confirmed in a Dec. 5 press release that it would pay roughly $168 million in settlement fees before the end of 2022. Hertz said the agreement resolves pending claims from customers who were falsely accused by the company of stealing rental cars.

According to Reuters, customers reported that they'd been detained by police due to the false theft reports—and some renters ended up in jail for weeks and months, per The Washington Post. The situation is even more bizarre, as certain customers were wrongfully accused months after they'd rented and paid, while others had never even rented a car from Hertz.

The settlement will resolve 95 percent of pending theft reporting claims, Hertz said in the press release, with a "meaningful portion" coming from its insurers.

"As I have said since joining Hertz earlier this year, my intention is to lead a company that puts the customer first. In resolving these claims, we are holding ourselves to that objective," Hertz CEO Stephen Scherr said in the release. "While we will not always be perfect, the professionals at Hertz will continue to work every day to provide best-in-class service to the tens of millions of people we serve each year."

But Hertz is once again making headlines and facing legal trouble—this time for the safety of the cars it rents to customers.

The NHTSA opened an investigation this month.

The U.S. Department of Transportation (DOT) National Highway Traffic Safety Administration (NHTSA) is currently investigating Hertz for renting out recalled vehicles that had yet to be repaired, Reuters reported.

The outlet cited an NHTSA filing dated Dec. 16—which was made public on Dec. 20—stating that the agency is "opening this audit query to investigate whether The Hertz Corporation (Hertz) has complied with the requirements of the National Traffic and Motor Vehicle Safety Act (Safety Act)."

According to the filing, the Safety Act forbids rental companies from renting out vehicles that are subject to recall, unless they've been repaired.

In addition, a law enacted in 2015 requires rental car companies with over 35 vehicles to complete recall repairs before renting them out, Reuters reported. This rule would certainly apply to car-rental giant Hertz, which also owns Dollar Rent a Car and Thrifty Car Rental, and has nearly 424,000 vehicles, per Statista data from 2020.

The agency is looking at Ford and Nissan models in particular.

The NHTSA confirmed to Reuters that it began receiving information late last year about Hertz renting out recalled vehicles that hadn't been repaired.ae0fcc31ae342fd3a1346ebb1f342fcb

"Information gathered by the agency to date, including from vehicle manufacturers, suggests repairs required under multiple NHTSA safety recalls were not made prior to the rental of such affected vehicles to Hertz customers," the agency told the outlet.

The NHTSA also told Reuters that both Ford Explorer and Nissan Altima cars are involved in the ongoing investigation. The vehicles were owned by Hertz between 2018 and 2020, the filing states, but no information was provided on how many of these cars were affected.

Hertz says it is committed to "providing safe rentals." 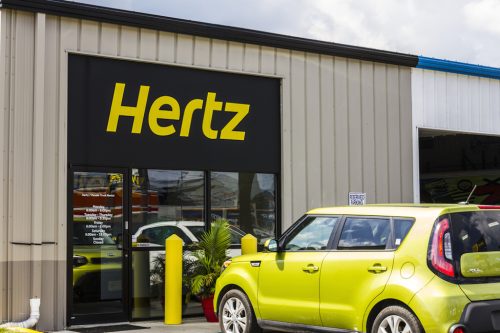 When asked about the investigation, Hertz told Reuters that the company is "reviewing NHTSA's request for information," adding that it is "committed to providing safe rentals for our customers."

The company has a page dedicated to its vehicle recall practices, explicitly stating that it does not rent or sell cars "for which we have received owner-of-record Safety Recall Notices." Within 24 to 48 hours (if there are over 5,000 vehicles involved), those cars are put on a Vehicle Safety Hold and aren't returned to service until the defect has been addressed.

However, Hertz also states that it will rent—but not sell—cars that have a completed "interim repair," which is authorized by the vehicle manufacturer. From there, Hertz waits on final repair instructions from the manufacturer, and once received, the vehicle is again put on a Vehicle Safety Hold until those last repairs can be addressed.

"Not renting recalled vehicles is a longstanding Hertz policy," the page reads. "Safety is our paramount concern at Hertz and we review our safety processes on a regular and ongoing basis."