23 Worst Reasons People Had for Calling in Sick in 2018

Spoiler: "Taylor Swift concert" is no excuse not to go to the office.

Ever call in sick to work when you were feeling just fine? If you answered yes, you're in good company. According to CareerBuilder, in 2017 alone, 40% of workers called in sick fraudulently at least once.

And while a good excuse can justify this seemingly-shady act, a bad one will inevitably make the situation worse worse. So with the year coming to a close, it's time to look back and cherish all the worst, most dumbfounding reasons behind people's decisions to fake sick throughout the past year. And if you see your co-worker on the list, try to forgive them—well, just keep it to yourself. 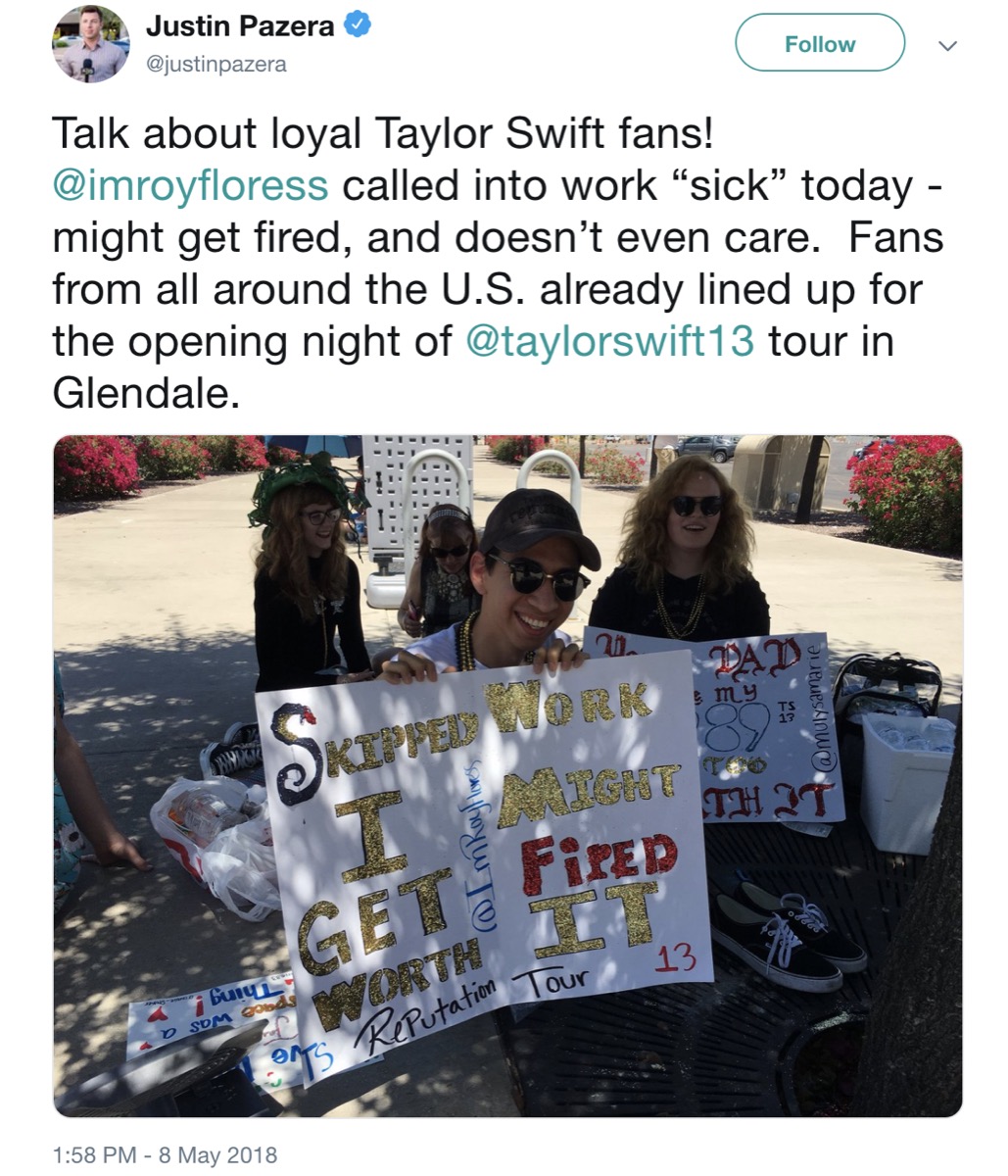 These fans decided to skip work to attend a Taylor Swift concert. They might have taken it too far, however, when they agreed to be captured by local news with signs saying it would be "worth it" if they got fired as a result. Let's just hope that theory wasn't tested.

2
To Go On An Adventure 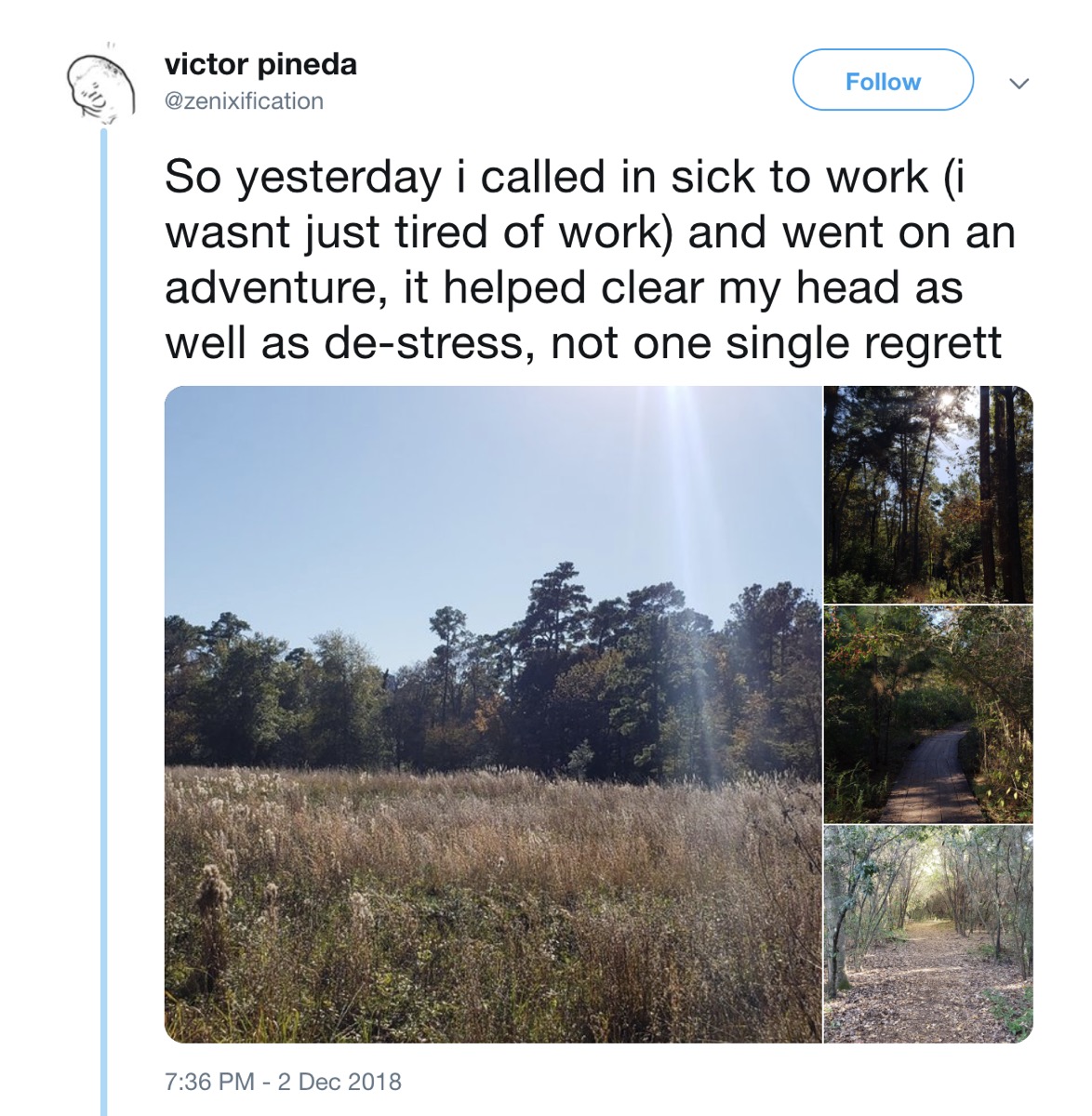 Most people wouldn't begrudge a co-worker for having an adventurous spirit. Having an adventure while your co-workers pick up your slack back at the office, however, might be seen as a tad selfish. At least he brought along a camera and showed them what they were missing.

3
To Wear A Red Suit On The Red Carpet 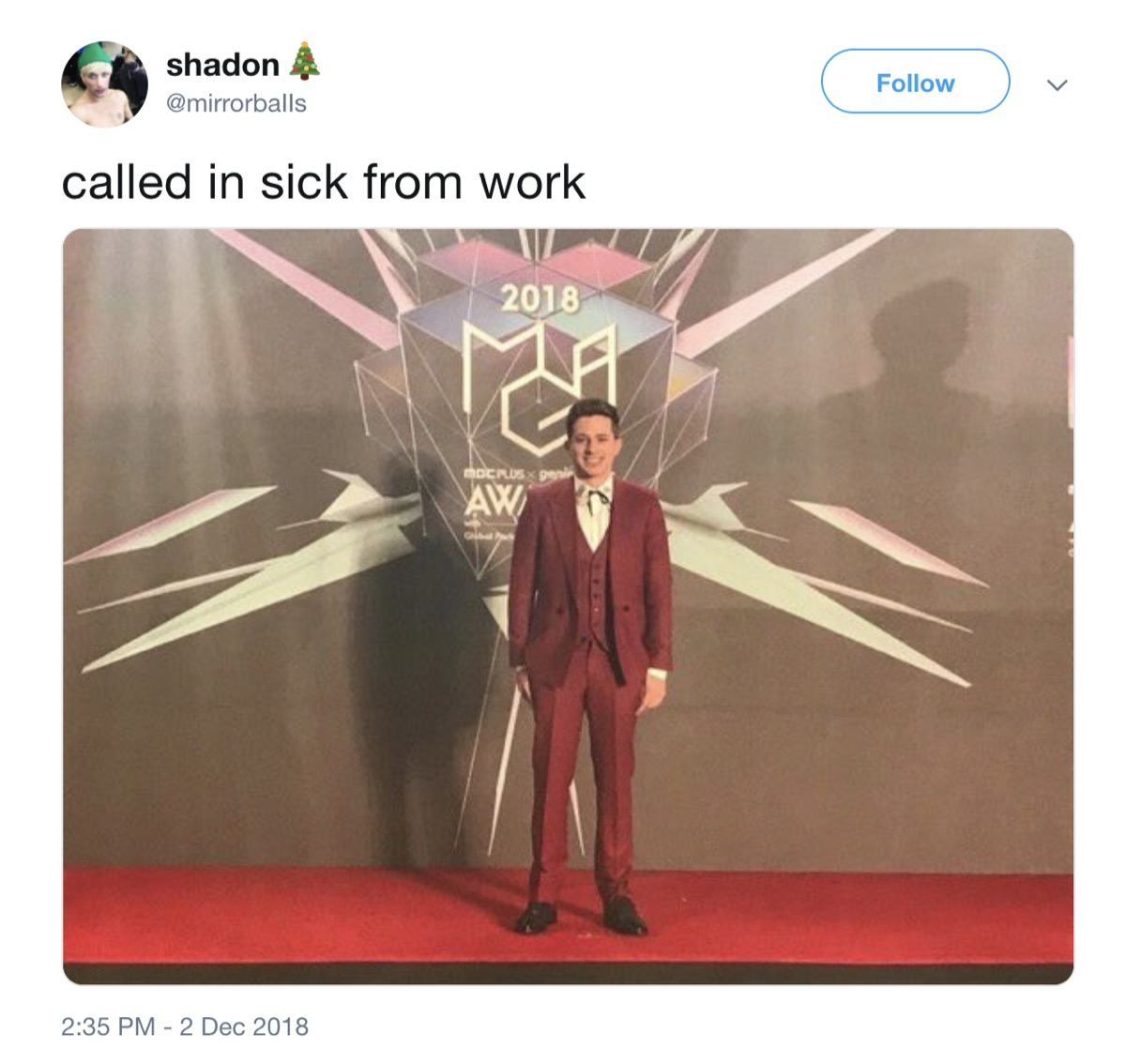 It's not every day you get to walk the red carpet. Even less frequently does one find themselves with the opportunity to strut down it wearing a red suit. However, it's likely their employer found it more difficult to appreciate the glamour of the whole thing—or to deem it a good excuse for calling in sick. 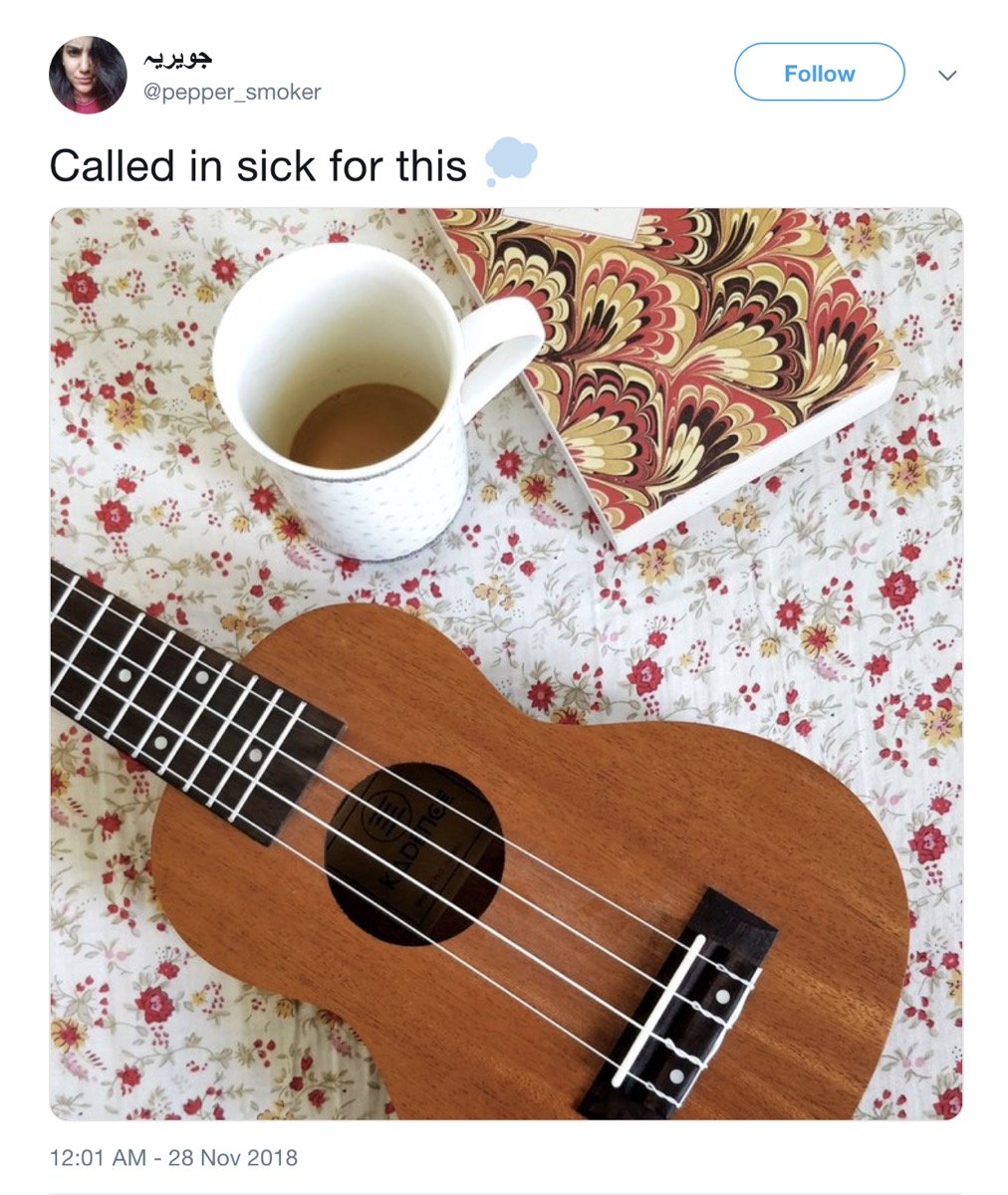 Despite what this faker may think, a ukulele and a mostly-consumed cup of tea aren't great excuses for taking a sick day. Let's just hope her employer understands that sometimes, the only cure for what supposedly ails you is taking time to perfect your Bruddah Iz impression.

When the fan site for the Red Dead Redemption video games tweeted out that "a little birdy" told them many people would be calling in sick for work to play the game, they weren't wrong. In addition to numerous responses to the tweet confirming their prediction, ComicBook.com reported that one social analytics firm found that the game had 1.5-times more absences associated with its arrival than the second most-skipped-for game of the year, Call of Duty.

6
To Dance At The Jazz Game 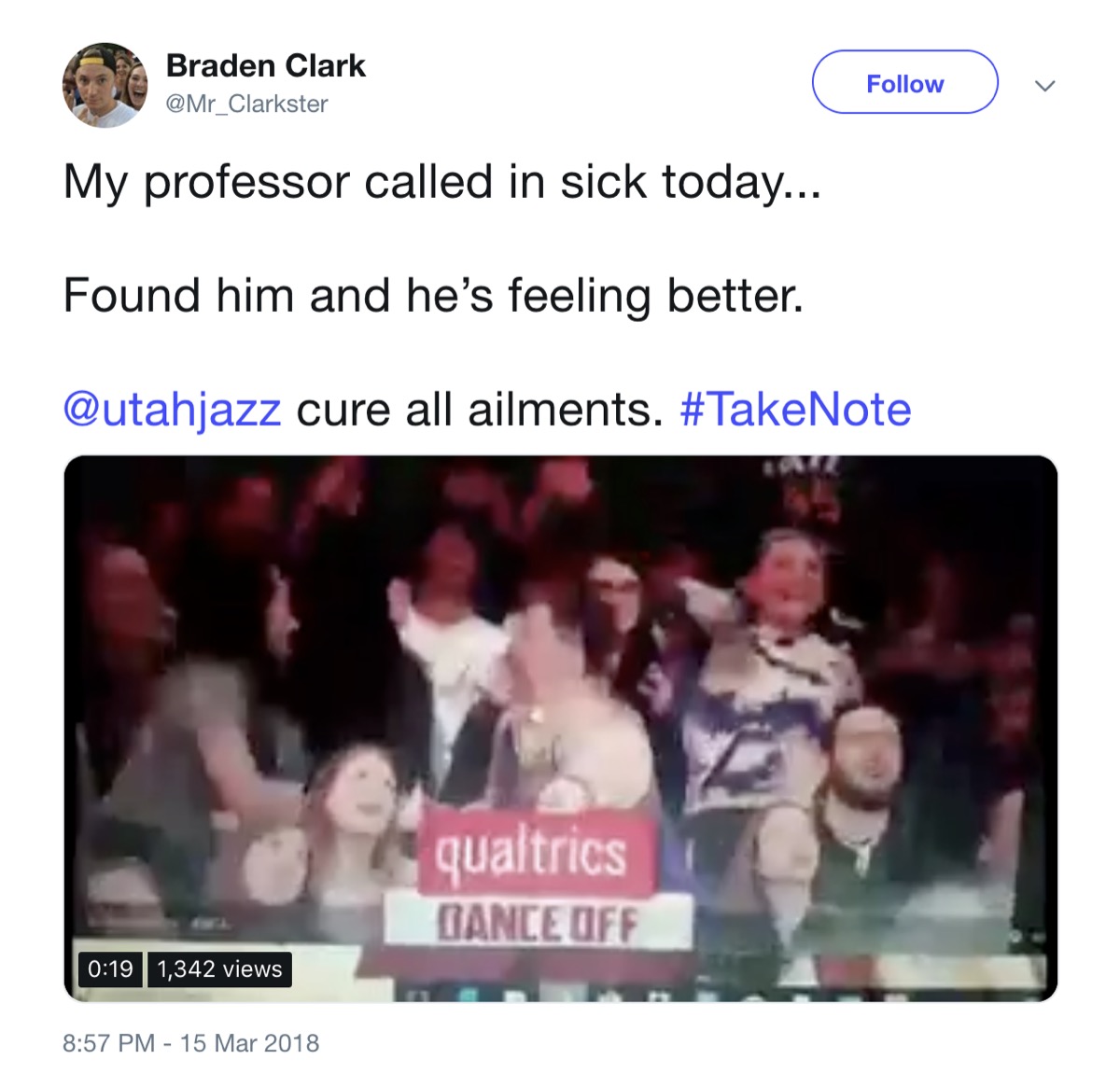 When one young man's college professor didn't show up for class, he assumed the professor must be sick. That was, until he spotted said professor dancing in the stands at a Utah Jazz game when the latter's moves earned him a spot on the Jumbotron—and the game's televised broadcast.

7
To Recover From Pride Parade That They Didn't Attend 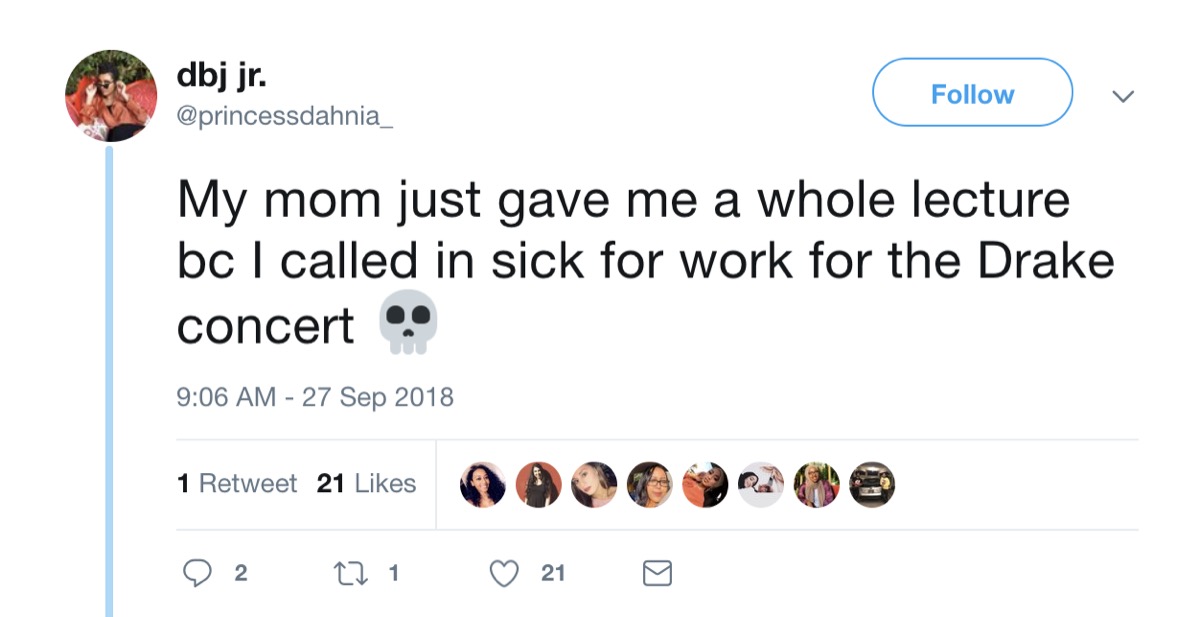 Sure, he may be the biggest hip-hop star in the world, but calling in sick to see Drake isn't a good enough excuse for this Twitter user's mother. And if she doesn't find acceptable, frankly, imagine how her daughter's boss feels.

9
To See Ryan Gosling Land On The Moon

As good as Ryan Gosling is, calling in sick to see his newest movie seems a little questionable. Isn't that why most movie showtimes are at night, anyway? Luckily, this guy will have plenty of time to catch all the movies he wants when he's on his upcoming stretch of unpaid vacation after his boss finds out.

It seems unlikely this excuse for calling sick went over well, though their employer may have been confused and alarmed enough to let them off the hook anyway. Here's to hoping they sfeel butter.

11
Went Too Hard On Mother's Day, Wanted Pizza For Breakfast

With all the hard work they put in, mothers deserve a day off. Come to think of it, they deserve two days off: one for being celebrated and the other for recovering and ordering pizza for breakfast. Anyone who thinks otherwise needs to work on their gratitude, ASAP.

Whoever this "Joy" is,  they should be applauded for tapping into their inner child for at least day. That said, calling in sick while already waiting in line for the rides at Disney was probably not an employer-approved decision. However, to Joy's credit, she stopped short of making the call from Space Mountain. 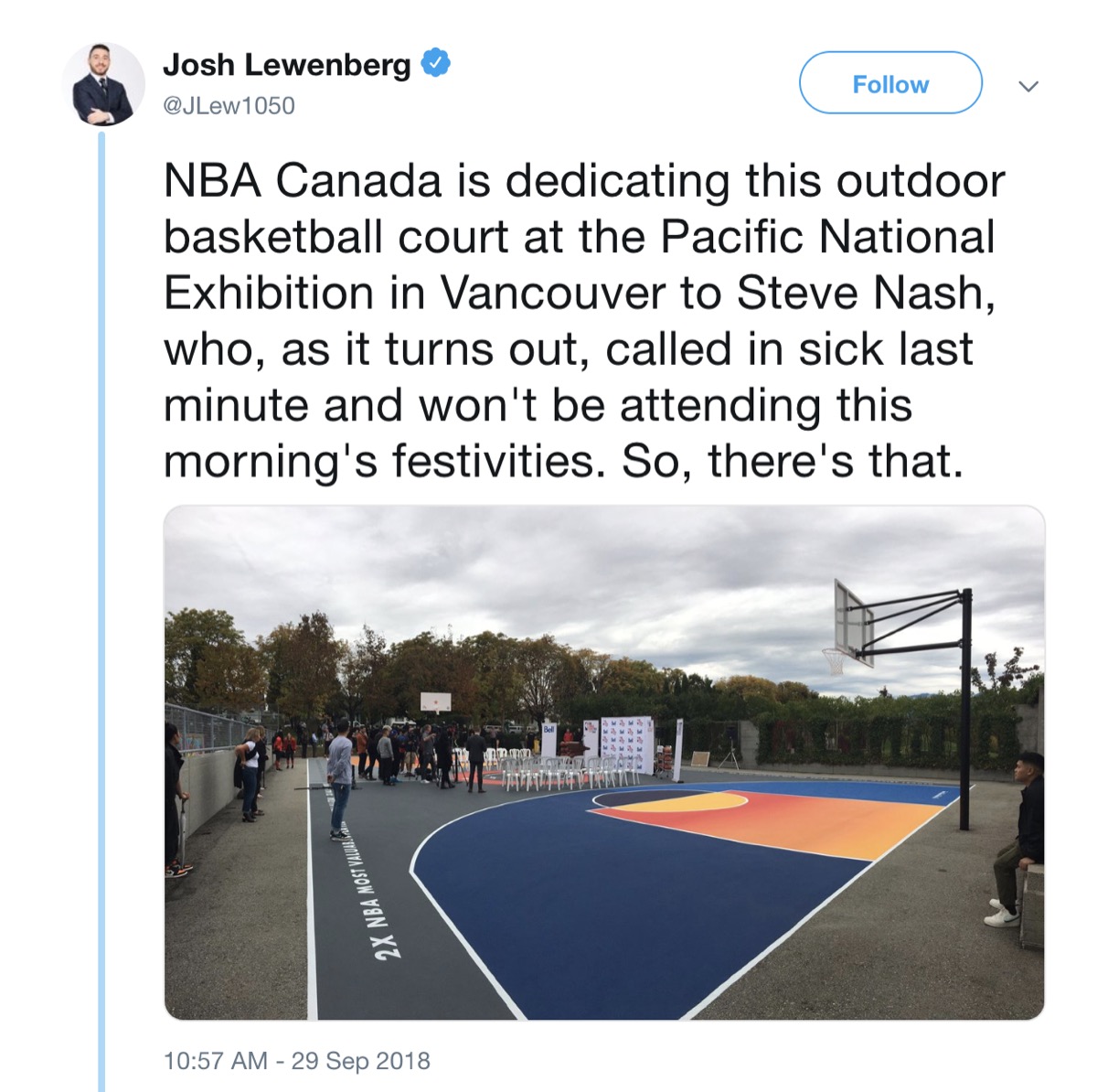 Former basketball great Steve Nash apparently didn't feel the need to witness the dedication of an outdoor basketball court in his honor. Calling in sick "last minute," Mr. Nash evidently had better plans—whatever those could be.

14
To Bake A Cake For Lady Gaga's New Song 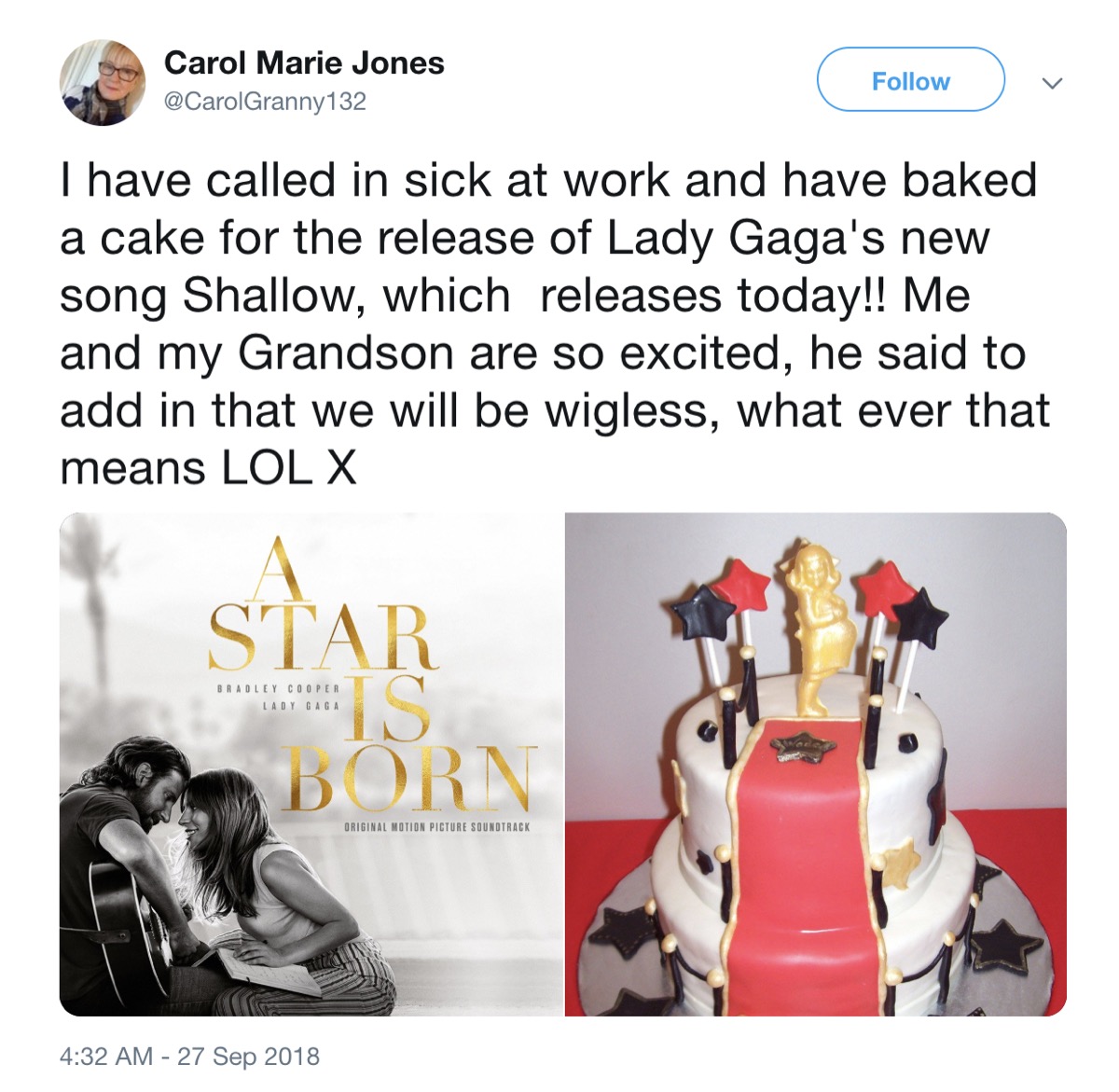 Is Lady Gaga going to receive this cake? Why is the statue on top a mom-to-be? There are so many questions here, and none of them give adequate insight into why someone thought this was a good idea. Let's just hope she passed out slices to her co-workers the next day—and assured them it was store-bought.

You have to respect the confidence this person has in their co-workers. The way they use that respect to justify their own absence, however, is another story. Who hasn't taken a two-minute shower and eaten a one-minute breakfast before rushing to work, anyway? 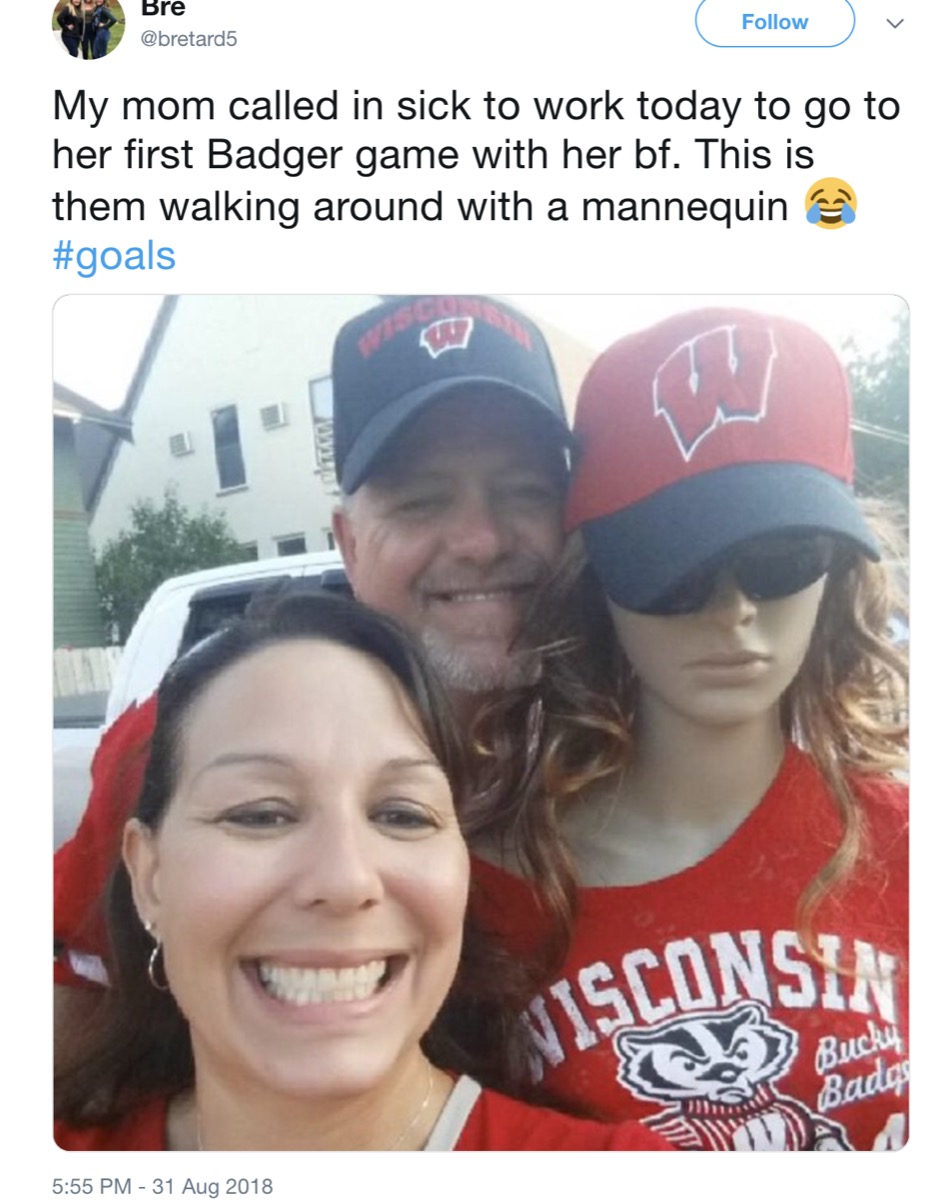 College football is big in Wisconsin. Bigger than work, though? We're not so sure. A better idea might have been to leave the mannequin at her place of work—maybe they wouldn't have noticed she was gone.

After a Nascar race he drove in, Alex Bowman's team wanted to thank the fans for coming out. Apparently they had some inside information, however, as they outed some of their fans who "called in sick" to enjoy the day's competition. It's a good thing they didn't tag anyone in the post, or those folks might have some serious explaining to do.

Despite having one of the worst reasons of the year for calling in sick, you have to respect this person for having no regrets. Whether their employers feels the same way about their hiring is another story.

19
To Go Golfing With Their Boss

Playing golf with a business partner is a great way to drum up business and make connections. Doing it on a day you're supposed to be in the office, however, isn't recommended. Thankfully, this one didn't turn into a catastrophic situation—even executives can appreciate the need to leave the office for a few rounds here and there.

This person's description of their "sick" day sounds quite pleasant. It does, however, beg the question: isn't that what weekends are for?

21
To Increase Their Chill

Staying chill is important—just ask penguins. But there must be other ways than calling in sick to get your hands on some, no?

22
Cubs Games in The Summer

This guy sure is lucky he and his buddy don't work at the same company. As for his "it's the Cubs, so it's cool" assertion, it seems doubtful that's a direct quote from his HR manager. Finally, with all his sick days planned out so far ahead, how does he make sure he doesn't get sick in the meantime?

23
To Avoid a "Come to Jesus" Meeting

While it's never good to skip work to avoid a potential conflict, the manager here deserves some of the blame, too, for sending out a warning. After all, you can't expect someone to attend their own execution voluntarily.