17 Magical Destinations Where the U.S. Dollar Goes Further in 2020

Here's how to make the most of your money.

Fact: The U.S. dollar is stronger than it's been in 30 years. So if you're teetering on the fence as to whether or not you should finally take that overseas trip you've put off, we've got some news for you: 2020 is the year to do it. Rarely will exchange rates work so positively in your favor.

But if you really want to stretch the most value out of that greenback on an international excursion, we've compiled here all of the best places—from the gloriously pristine beaches of Belize to the striking ancient temples of Japan—where you're guaranteed to make the most of your vacation savings.

This Southeast Asian country remains one of the best value destinations for Americans: Street food reigns supreme and luxury beach resorts can be nabbed at a fraction of the cost of, say, the Caribbean or the Mediterranean. (We're talking around $100 a night for a private villa!) After a few days exploring the iconic temples of Wat Arun and Wat Pho, in Bangkok, head to the northern Chiang Rai Province to walk beside elephants and explore the Golden Triangle, a sacred spot on the Mekong River that borders Thailand, Laos, and Myanmar. Then, hop a flight to Phuket or Koh Samui, where palm-fringed beaches come alive after sunset with fire dancers and night markets.

Few places in Central Europe are as transportive as Hungary. Pass the day exploring Budapest's art nouveau bathhouses, Aquincum's ancient Roman ruins, or Bereg's medieval townhouses, and you'll feel as if you've stepped back in time. Couple that with haute cuisine at restaurants like Costes and modern art immersions at Varfok Gallery or Budapest Art Factory, and you've got the perfect mix of classic and contemporary. The best part? The Hungarian forint is 47 percent undervalued against the U.S. dollar, so you're getting a bang for your buck in terms of meals and hotels (note: the Buda side of the city has more wallet-friendly stays).

Although Japan can be an expensive country to visit, the exchange rate is better than it has been in nearly 20 years. Talk about perfect timing for the 2020 Olympics! Japan has something for every kind of traveler and every kind of budget: Walk among Kyoto's cherry blossom trees, sleep in a provincial ryokan, hike to the summit of Mt. Fuji, or get lost among the dazzling street lights of Tokyo. And if you dig a little deeper into the country's hidden gems, you might find yourself skiing through fresh powder (called "Japow") in Hokkaido or napping on the tranquil beaches of Ishigaki.

Chile is the kind of place that calls to travelers in search of a grand, once-in-a-lifetime journey. From the volcanic cliffs of Easter Island to the glacial peaks of Torres del Paine National Park, dramatic landscapes abound. As do sophisticated cultural and gastronomic experiences, be it drinking world-class wines in the Elqui Valley or trekking the remote fjords south of Tortel. In Santiago, you'll find suites for a steal (under $200 a night).

If Croatia's glistening Adriatic waters don't call to you, its sun-baked towns sure will. Beyond its beautiful panoramas, the Dalmatian coast offers much more value than the rivaling French or Italian rivieras. This is especially true in captivating port towns like Korčula and the enchanting Paklinski Islands. To take it all in by sea, charter a sailboat or catamaran on Sunsail's food and wine flotilla, where you'll cruise from Split to Hvar, Vis, Brač, and more. Pro tip: Watch out for Dubrovnik, where prices have skyrocketed following HBO's hit show, Game of Thrones.

Whether you pick Guanacaste, Papagayo, Nosara, or beyond, Costa Rica will stun with its nature-filled landscapes, "slow travel" mentality, and affordable local lifestyle. (Expect to spend no more than a few bucks on a hearty Gallo Pinto rice-and-beans breakfast.) It's easy to embrace the pura vida way of life when you're kicking back at a chill surfers' retreat on the Osa Peninsula or a hot springs resort in Arenal Volcanoes National Park, which is free to enter like all of the country's national parks.

There's no better place to live out your castaway fantasies than this Pacific Ocean archipelago, home to some 7,000 islands, many of which remain blissfully uninhabited. The jungle-covered limestone cliffs and crystal-clear emerald waters surrounding Palawan, a UNESCO Biosphere Reserve, may look straight out of a postcard, but they'll certainly feel real once you step foot on the island's sugary shores.

You'll find just as much deep-rooted tradition in South Korea as pockets of contemporary cool. In Seoul, the country's boisterous capital, the streets are electric. After a day of history and culture—don't miss a tour of the city's most impressive landmarks, such as Gyeongbokgung Palace—it's time for nightlife and food. Among the bustling food stalls of Hongdae, travelers can startle their palates with tteokbokki (spicy rice cakes slathered in gochujang sauce) and Korean pajeon (rich pancakes stuffed with leeks and green onions). Or, to really stretch your dollars, head south to the seaside city of Busan, where you can stroll along Haeundae Beach and explore Gamcheon's colorful, clifftop artist community—at half the price of Seoul.

From the vineyards of Mendoza and the European allure of Buenos Aires to the remote mountains of Bariloche, Argentina is a country that stuns as much with its natural beauty as its diversity of discovery. Start your journey with tango and football in iconic Buenos Aires barrios, like San Telmo and Palermo Hollywood, before hopping on a two-hour flight to Argentina's epic Lake District. The glistening shores of Lake Nahuel Huapi are the perfect backdrop for leisurely nature walks and gourmet picnic lunches. Cap it off with a bucket-list excursion to Patagonia's Los Glaciares National Park, where you'll swap sneakers for crampons and max out your iPhone storage snapping pics on a trek across glacial streams, lagoons, and mighty fjords.

Sensorial overload is both the expectation and the goal in India, where chaotic metropolises like New Delhi stun in equal measure as the quiet lakes of Udaipur. Whether you choose a classic circuit through the northern state of Rajasthan, relax on a beach holiday in the Andaman Islands, or seek out more rarified experiences—such as Ayurveda lessons in Dehradun or studies on the ancient Buddhist Caves of Ajanta—India never fails to deliver.

If you're looking for an affordable journey to Latin American, set your sights on Colombia, where travelers can get by on $50 to $100 per day. Start off in the colorful city of Cartagena, where you'll explore the walled Old City—filled with 16th-century colonial architecture and picturesque cobblestone streets. Then, after taking in your fill of culture, make a day trip to the coral reef-lined Islas De Rosario for some R&R.ae0fcc31ae342fd3a1346ebb1f342fcb

Forget the backpacker's mentality: Luxury is an accessible reality on Indonesian isles like Bali, Lombok, Jakarta, and beyond. Even the pricier resorts promise delicious, locally sourced cuisine, adventurous activities like diving and snorkeling, and mind-numbing spa treatments for which you'd (let's admit it) pay 10 times more at home. 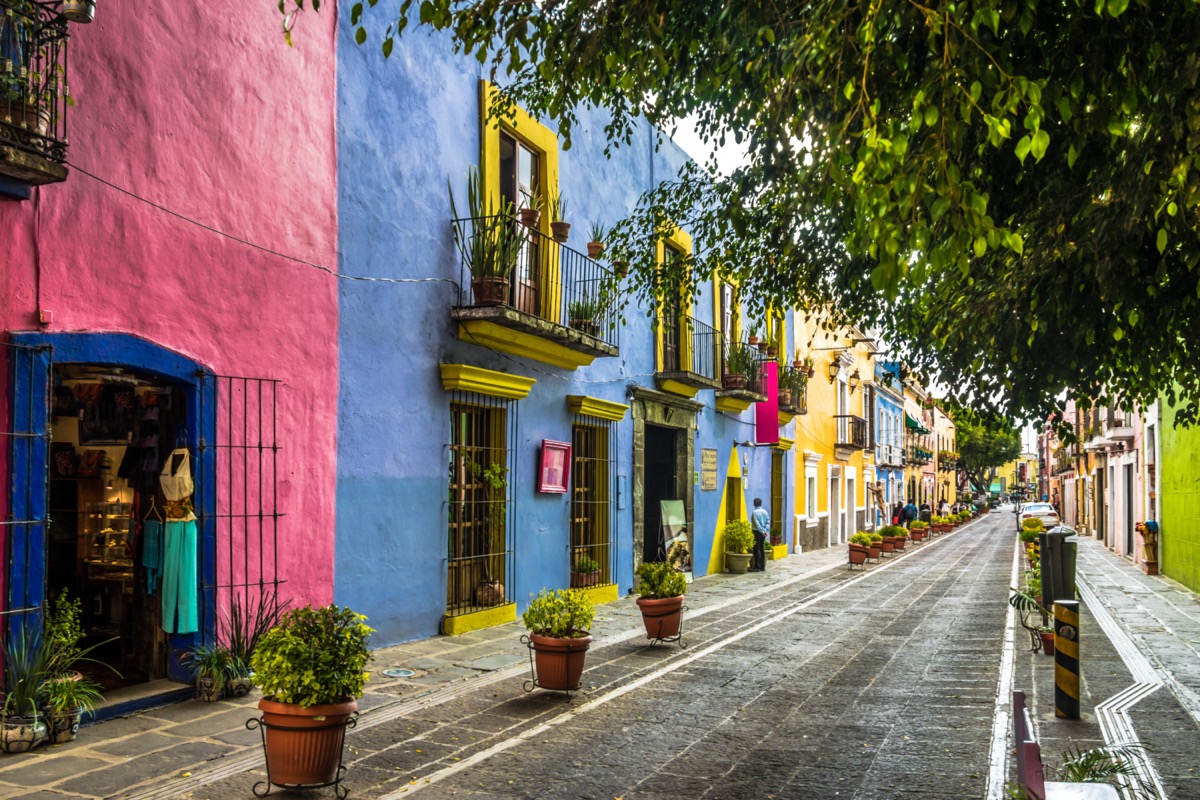 Culture vultures love the capital of Mexico City for its cutting-edge museums (like Museo Jumex and Museo Soumaya) and eclectic, artsy neighborhoods such as La Condesa and La Roma. Beach enthusiasts will find heavenly stays in Tulum, Los Cabos, and the Riviera Nayarit. Oenophiles, meanwhile, will be surprised by the upscale wineries and impressive vintages of Valle de Guadalupe, while anyone and everyone can no doubt appreciate the tequila of Guadalajara.

Fly a few thousand miles east of continental Africa, and you'll be transported to the remote island fantasy that is Mauritius. While pristine Indian Ocean beaches may be the main photogenic attraction, it's the mountainous interior that will truly surprise and delight. Black River Gorges National Park is filled with rainforests, waterfalls, and unique wildlife like flying foxes. For more amazing beach destinations, check out the 30 Most Magical Islands on the Planet.

Discovery lays at the heart of this Himalayan mountain kingdom. Despite its remote geography and tiny footprint (Texas is five times the size of Nepal), life flourishes below the towering peaks of Mount Everest. In the thriving capital of Kathmandu you'll find centuries-old golden temples and genuinely happy people everywhere you turn. Head further afield to Chitwan National Park to seek out wild rhinos, elephants, and Bengal tigers, or make a spiritual pilgrimage to Lumbini, the birthplace of Buddha.

This unsung Central American gem has more to offer than just a coastal getaway. Travelers can tour ancient Mayan ruins, kayak through untouched mangroves, scuba dive with sharks, and more. If you are a beach purist, rest assured there's none better than the whitewashed shores of Ambergris Caye. Post up at a boutique hideout like Matachica Resort & Spa and while away the afternoons on sugar-soft sand, with a coconut mojito in hand.

Sri Lanka is an island nation chock full of contrasts. In the inland north, you might find yourself sipping tea at colonial-era plantations; to the southeast, riding in 4×4 Jeeps in search of elusive leopards on safari. Elsewhere in the country, the fort city of Galle oozes centuries-old history, while Kandy is a spiritual sanctuary, and Tangalle a haven for beach bums and surfers alike.