Delta Will Finally Let You Go Online for Free on Flights, Starting Next Year

The move could potentially set the standard for the entire industry.

In recent years, airlines have changed how they charge customers for specific add-ons beyond airfare. Some carriers have tacked on more fees, especially for things like carry-on bags, checked luggage, or priority seating. But others have taken a different route by making more amenities free, including many that have dropped flight change fees for passengers who need to rebook at the last minute. And soon, travelers will be able to enjoy another perk without paying, as Delta will reportedly let passengers go online for free during flights in the new year. Read on to see why the change could have a major impact on flying.

READ THIS NEXT: Southwest Is Finally Changing the Way It Boards Flights.

Delta has recently invested in improving its onboard WiFi systems. 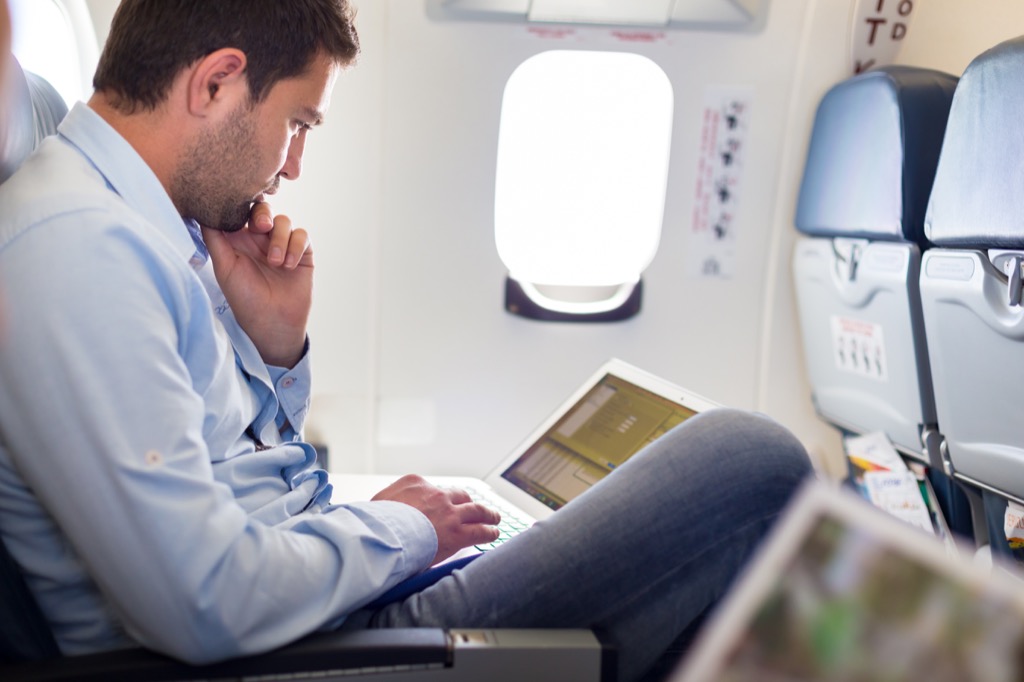 Even though WiFi onboard flights is no longer a new service, many would argue that the experience leaves plenty to be desired thanks to slow speeds and unreliable connections. But in recent years, Delta has actively pushed to update its inflight internet service—all with the aim of eventually providing it as a perk to customers.

"We're going to make it free," Delta CEO Ed Bastian said during an on-stage interview at Skift Global Forum in Sept. 2018. "I don't know of anywhere else besides in an airplane that you can't get free WiFi."

To work towards its goal, the airline experimented with free WiFi on certain flights in 2019 before it partnered with provider Viasat to upgrade its hardware, The Wall Street Journal reports. Since 2021, the carrier has charged $5 for access to the internet during domestic flights on enabled aircraft.

Delta will reportedly let passengers go online for free in the coming months.

Now, all of its investments and upgrades appear to be paying off. According to sources familiar with the matter, Delta plans to roll out free WiFi and internet connection on its planes in the coming months, The Wall Street Journal reports. The new feature could be in place as soon as early 2023.

Free WiFi is expected to kick off on "a significant portion" of Delta's fleet as the airline expands the program and retrofits other aircraft through the remainder of the year, according to the report. The system will likely require passengers to sign in to their Delta SkyMiles loyalty program or enter their membership number to access the service once it begins.

In a statement to Best Life, a spokesperson for Delta did not confirm plans for free WiFi on flights in 2023, but said, "We are currently in the process of testing Wi-Fi infrastructure with various offerings to select customers on select routes. Customers will be notified if they have this option on their flight."

Other airlines have already launched free WiFi or are planning to do so soon.

If the policy comes through, Delta will become the first of the major three airlines—which includes American and United—to allow its passengers to get online free of charge. But it wouldn't be the first airline to ever give away WiFi along with each ticket.

Currently, JetBlue is the only airline in the U.S. that offers free WiFi onboard its flights, Engadget reports. The carrier has used sponsorships with companies such as Amazon to cover the cost of its "Fly-Fi" service—which has also long been considered to be relatively fast. And Hawaiian Airlines also recently announced that it would begin to offer free in-flight WiFi for all long-haul flights starting next year, The Wall Street Journal reports.

Southwest Airlines is in the process of upgrading its fleet's WiFi as well. Currently, the company charges a flat rate of $8 to connect for an entire day. But while it's tested free internet on some flights, executives with the company have recently said it doesn't intend to make the service complimentary in the immediate future, according to The Wall Street Journal report.ae0fcc31ae342fd3a1346ebb1f342fcb

The change could have a significant effect on the airline industry if it comes through.

The reported upcoming change will help Delta stand out as an enticing option for business travelers who need to get a little extra work done on their flight—or even leisure travelers looking to pass the time while they're in the sky.

But while anyone flying on a flight with a free internet connection will immediately appreciate the change, the move could also kick off a major change in the industry that could make the novel perk a norm, Simple Flying suggests. So far, American Airlines is also testing a similar system for free WiFi by allowing internet access after passengers watch a short video ad.

However long it takes for Delta to roll out its new WiFi policy, it's clear the company is committed to making the online experience better for its passengers."It's complex to do, but we are actively testing it right now, and it's working," Allison Ausband, chief customer experience officer for Delta, said at an industry event in November, per The Wall Street Journal.